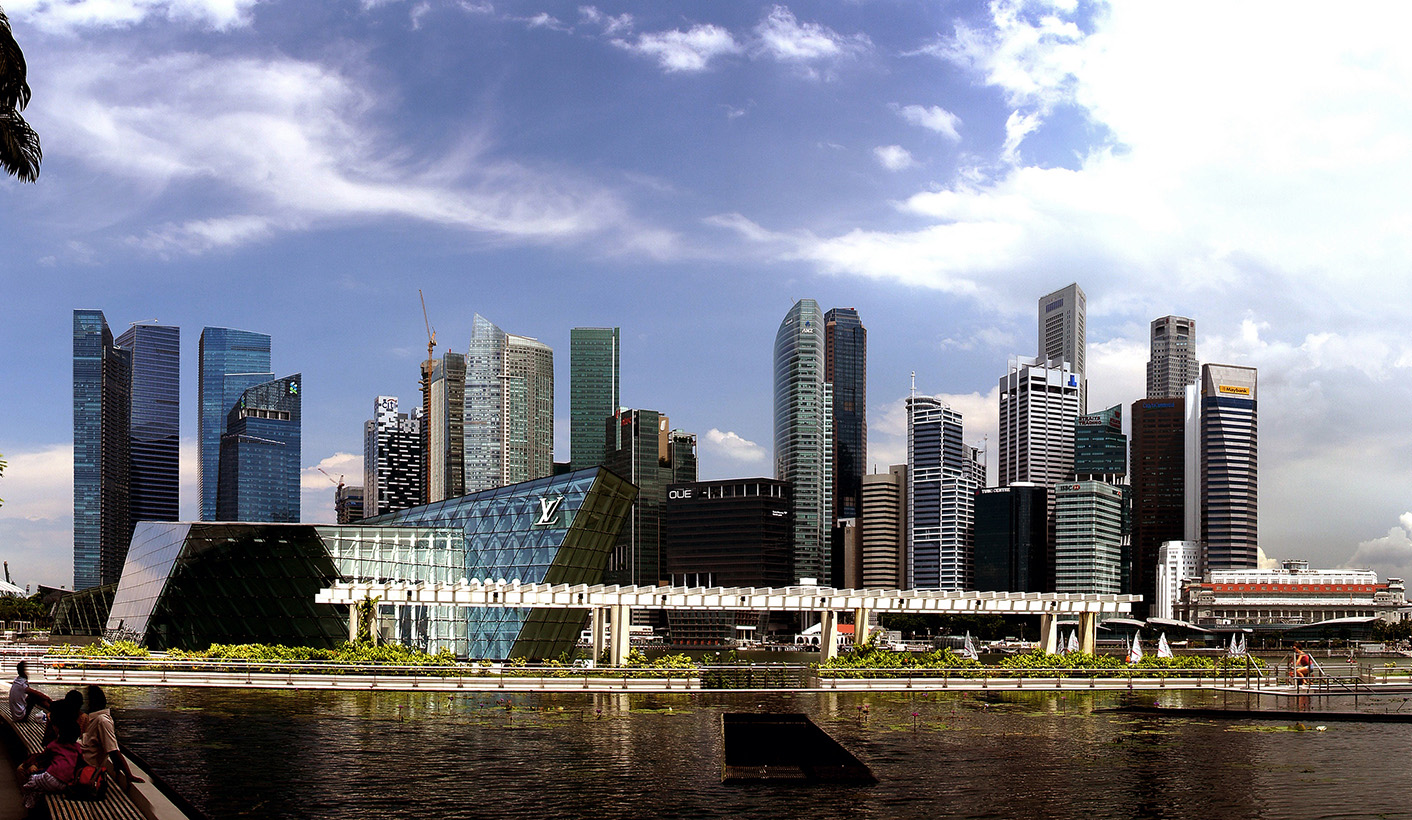 This is the 15th article in the series, ‘Declassified: Apartheid Profits’. While researching the recently published book Apartheid Guns and Money: A Tale of Profit, Open Secrets collected approximately 40,000 archival documents from 25 archives in seven countries. This treasure trove contains damning details of the individuals and corporations that propped up apartheid and profited in return. Many of these documents were kept secret until now. Most remain hidden despite South Africa’s transition to democracy. OPEN SECRETS believes that it is vital to allow the public to scrutinise the primary evidence. This week we unpack the diplomatic and military intelligence links between the apartheid regime and Singapore.

The ‘Declassified’ series released over the last three months has established that each member of the Permanent Five on the UN Security Council assisted the apartheid regime to bust sanctions. Tasked with enforcing the embargo that aimed to end the regime, they chose to undermine it for profit and political gain. They were not alone. The book Apartheid Guns and Money identified 47 other countries that assisted the apartheid regime in evading sanctions – some as proxies for larger countries, and others of their own accord. Singapore is one of the many intriguing examples of the latter.

Following a trip to Singapore in March this year, Helen Zille came under fire for tweeting that not all aspects of colonialism were negative. In this flurry of controversial tweets, the former leader of the Democratic Alliance (DA), compared South Africa to Singapore. In one tweet, Zille wrote, “Singapore had no natural resources and 50 years ago was poorer than most African countries. Now they soar. What are the lessons?”

What these 140 characters fail to take into consideration is the cost of achieving this unprecedented economic growth. Singapore, which now enjoys the fourth highest GDP per capita in the world, is a tiny island city-state off the southern coast of Malaysia that has used its strategic position as an entry port to Asia to develop into a prosperous financial hub and trading centre. This position also made it an ideal hub for illicit trade. Most of this growth took place during three decades of authoritarian rule under the country’s first post-colonial leader, Lee Kuan Yew. This authoritarian bent survives today.

Given Singapore’s strategic location in Asia and its historic priority of profit over human rights, it should come as no surprise that it was an ally for apartheid South Africa’s secret sanctions-busting operations. The evidence suggests that military ties between Singapore and apartheid South Africa developed in the late 1970s, just before the South Africans’ collaboration with Communist China accelerated.

Singapore, with easy access to international shipping routes, was a significant centre for international trade by the 1980s. It was an ideal go-between for Armscor, the South African state-owned arms company, to buy and sell weapons clandestinely. The ties were so close by 1982 that PG Marais, the chairman of Armscor, met with Goh Keng Swee, the senior deputy prime minister of Singapore (and previous Minister of Defence) to discuss “matters of mutual interest to our two countries”.

Shortly afterwards, PW Botha personally invited Swee to visit South Africa, promising, “I can assure you that your presence here will be treated with the appropriate discretion.” Goh Keng Swee accepted Botha’s offer of a secret liaison and made the trip to South Africa in 1983. He met with the minister of defence, the head of Armscor and top officials from government and the South African Reserve Bank.

These diplomatic ties only represented the surface of the close relationship between Pretoria and Singapore. More fundamental were the ties between their respective military intelligence agencies. These agencies had an enduring relationship which was facilitated by a key South African ally on the ground: the head of Singapore’s secretive Security and Intelligence Division (SID), Eddie Teo (Chan Seng). Today, Teo is a respected public servant in Singapore and head of the country’s Public Service Commission. The Oxford graduate was awarded one of the highest honours in 2017 for his public service to Singapore.

A secret military memo reveals that in the 1980s, Teo was a crucial link to the apartheid regime, visiting South Africa on numerous occasions during that decade and cementing Singapore’s role as a conduit for intelligence and, crucially, weapons. Singapore was often the party seeking secret weapons shipments. A Singaporean delegation visited South Africa in 1982 and handed over a shopping list of weapons to Military Intelligence. They were particularly interested in Eastern bloc weapons that the South Africans had managed to smuggle from behind the iron curtain.

This trip was followed by a meeting between the respective countries’ intelligence services who agreed to co-ordinate through their military attachés in the Taiwanese capital Taipei. Such intelligence conferences became annual events.

2. Summary of Relationship with Singapore

Recently declassified military intelligence records show that in November 1983, the Singaporeans placed an order with Armscor for “certain communist weapons”. Armscor responded confirming that they could supply 3,000 AK 47s; three million bullets; 50 RPG-7 (anti-tank rocket-propelled grenade launchers); and 1,000 rounds of RPG-7 ammo. The price tag for the lot would come to $1,375,800.

Despite internal concerns that this would deplete the South African Defence Force’s own weapons stash, the deal went ahead. Weapons from “communist” enemy countries were not in short supply and as we showed last week in Declassified: Apartheid Profits – China’s support for apartheid revealed, Pretoria could count on a secret channel that ensured a steady supply of weapons from communist China to top-up its reserves. The documents show that this was the basis for approving the sale. The Singaporeans made the secret payment for the weapons from the Singaporean development bank via banks in Luxembourg.

3. Payment for Weapons to Singapore

In all likelihood, the weapons made in “communist” China, sold to apartheid South Africa and resold to authoritarian Singapore, were being used by the Mujahideen fighting Russian occupation in Afghanistan, and Chinese-backed guerilla groups in Cambodia. In the 1980s, the Mujahideen were supported by the West as a bulwark against Soviet expansion. But by the 1990s, this anti-communist ally would give rise to al-Qaeda and eventually what today we know as ISIS.

Singapore’s collaboration with and support for Pretoria shows us that the tacit disregard for international laws allowed by the world’s powerful nations permeated the international system. A range of proxies and other players acted as conduits for sanctions-busting and became part of a larger global system that helped the apartheid state live beyond its years.

These networks thrived in secrecy, and the relationships were at their strongest in the shadows, where spies and arms dealers could carry out business away from scrutiny. Secrecy is still an important basis of Singapore’s modus operandi. The tropical islands status as a free port makes it a haven for tax dodgers. It also houses several firms specialising in incorporating secret offshore vehicles to hide wealth. Some of these were identified in the treasure trove of documented tax malfeasance exposed in the Paradise Papers by a consortium of leading investigative journalists. These secret activities may not deliver guns, but they nonetheless deliver misery to ordinary people around the world, all the while profiting the ultra-rich and politically connected. DM

Read more about the proxies and other players who helped South Africa bust sanctions in Apartheid Guns and Money: A Tale of Profit by Hennie van Vuuren published by Jacana Media