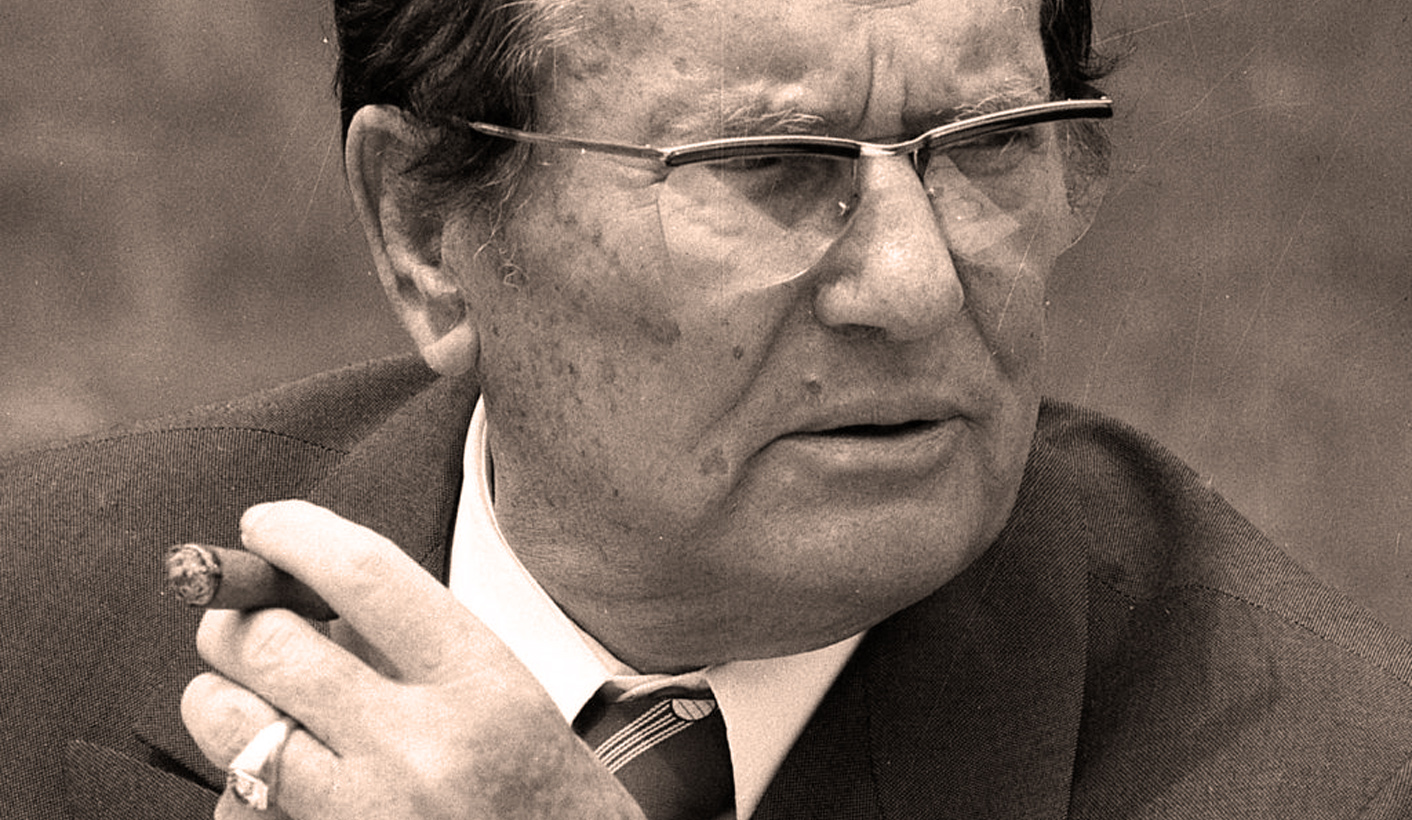 This week we present the 17th piece in the series, ‘Declassified: Apartheid Profits’. While researching the recently published book Apartheid Guns and Money: A Tale of Profit, Open Secrets collected approximately 40,000 archival documents from 25 archives in seven countries. This treasure trove contains damning details of the individuals and corporations that propped up apartheid and profited in return. Many of these documents were kept secret until now. Most remain hidden despite South Africa’s transition to democracy. OPEN SECRETS believes that it is vital to allow the public to scrutinise the primary evidence. This week we reveal a bizarre plan hatched in the 1980s by the South African and Argentinian militaries to engineer a trio of coup d’états involving Haiti, Yugoslavia and Albania.

Coup d’états rarely play out without an international dynamic and the involvement of nations with an interest in the outcome. One of the lingering questions around the ongoing coup in Zimbabwe is which other countries were in the know, and what assurances or assistance was given by governments in South Africa, China or the United States. While there is undoubtedly overwhelming popular support to put an end to Robert Mugabe’s brutal and corrupt rule, less attention is given to shadowy deep state networks that also seek to benefit.

As we have shown in the book Apartheid Guns and Money: A Tale of Profit, declassified documents from South Africa’s Military Intelligence archives reveal a tale of an outlandish coup plot. Nearly 40 years ago the apartheid military establishment was drawn into a plot to assist in three coups on two continents in the space of six months. Its central partner in the plan was their close ally in the 1980s – Argentina. The coups were never carried out – but the plans shine a light on the nature of the apartheid regime’s international deep state networks.

In the 1970s and 1980s, the military junta in Argentina oversaw a reign of terror. Human rights groups estimate that up to 30,000 people were “disappeared” by the dictatorship between 1976 and 1983. The junta received support from its key ally in the Western hemisphere, the United States. For South Africa, the like-minded Argentinian military dictatorship presented new opportunities for collaboration across the South Atlantic. Weapons trades between the countries were extensive and regular.

One aspect of this relationship, kept secret until now, was a series of proposed coup plots jointly hatched in the early 1980s by the Argentinian and South African militaries. Never realised, this bizarre plan intended to overthrow the governments of Haiti, Albania and Yugoslavia.

The backdrop of these plans was the 1980 Moscow Summer Olympic Games. The calculation was that the Soviet empire, focused on logistical arrangements, would be hard-pressed to mount an effective response to the coup in Yugoslavia. An added benefit was that with so much attention directed on Moscow, this would be the  perfect opportunity to humiliate the Soviet Union. For both avowed anti-communist regimes, the prospect of these fantastical plans was too appealing to pass up.

Recently declassified documents suggest that the go-between in this affair was a man called Stephen A Koczak. A former US diplomat, Koczak unsuccessfully contested both the Democratic and Republican presidential primaries three times between 1984 and 1992. How Koczak gained such access to Argentinian and South African intelligence circles is unclear. However, top-secret internal military memos show that his fanciful plan was taken seriously at the highest levels.

To set the international coup plot in motion, the first target was the government of Haitian President Jean-Claude ‘Baby Doc’ Duvalier. The Haitian coup was planned for late December 1979. Duvalier, a dynastic ruler and kleptocrat, was earmarked for replacement by a well-off Haitian banker, Clemard Charles.

According to military intelligence documents, Charles had undertaken, once installed as new Haitian president, to cut ties with Fidel Castro’s Cuba, work with South Africa and recognise the bantustan of Transkei. In addition, Charles agreed to provide logistical support to the two subsequent coups in southern Europe. These were all appealing prospects for the apartheid government.

South African Military Intelligence, without any explanation in the documents, decided not to support the Haitian initiative. Instead, it offered to provide assistance to Charles, only if his proposed coup was successful. Perhaps the South Africans wanted to test his seriousness or they were wary of irritating the United States in its own backyard.

Despite the fact that the Haitian coup was ultimately unsuccessful, the South Africans and Argentinians still saw a prospect for coup attempts in Albania and Yugoslavia. These were scheduled to take place between mid-July and early August 1980 to coincide with the Olympic games in Moscow.

In November 1979, while travelling from Rome to Buenos Aires, Koczak stopped over in Pretoria to firm up South Africa’s support. He was on his way to liaise with security officials in Argentina and would be joined by Colonel Knoetze, an official from South African Military Intelligence. As the documents show, these travel arrangements were signed off at the highest level by then South African Minister of Defence, Magnus Malan.

According to Koczak, the project had the support of the Argentinian Army, Air Force, Navy and intelligence services, who had agreed to train 1,500 Croatian soldiers for the operation. The Croats, a Yugoslav minority, would focus their efforts on winning control of an area of the country today known as Croatia. Once trained, the Croat militia would be transported by ship to Yugoslavia under the guise of returning migrant workers. The harbours, which were controlled by Croat naval officers, would be captured with their assistance, and they relied upon Croats working in Yugoslav air bases to sabotage military aircraft. This would effectively cripple any major military effort to counter the coup.

Simultaneously, plans were afoot to stoke a revolution in the neighbouring state of Albania. The plan was that the Albanian coup would only be rolled out three or four days after power had been seized in Croatia, as the Croat forces would send ships to back the Albanian fighters.

The documents also reveal that the Argentinian military was engaging several Cardinals at the Vatican to obtain their approval for the coups. In a top-secret memo, the South African military attaché in Washington noted that “the Argentinians wanted assurances the Vatican is committed to eliminate liberal elements in the Catholic Church”. The Argentinians no doubt saw the rise of the liberal Catholics supporting social justice and liberation theology in Latin America as a direct threat to their authoritarian rule and that of their allies. Hence, Vatican involvement in the proposed coups was as an opportunity to challenge this.

For the South Africans, the goal was to “establish contact with the Vatican from an intelligence point of view”. The coup plotters also regarded the election of the Polish Pope John Paul II as of strategic value. Given his anti-communist stance, they felt that he would be inclined to support the plot.

Assistance from South Africa for the coups would be required in the form of finance and training. As with the Haitian coup, the plotters were looking to South Africa to bankroll the effort. With regards to training the 1,500 Croat soldiers, the Argentinians could not reasonably incorporate that many soldiers at once. As such, it was suggested that some of the force would be covertly trained in South Africa. To prevent any embarrassment for their hosts, it was proposed that Croat and Albanian soldiers need not be told they were being shipped to South Africa for training, but rather that a “fictitious site in Latin America can be named”.

None of the three coups ever took place. The South African and Argentinian officials may have questioned the seriousness of the plotters (although the documents don’t suggest this). They might also have been dissuaded by other friendly Western intelligence agencies – after all, neither Albania nor Yugoslavia was a hardline pro-Moscow supporter. Added to the mix was the fact that the Yugoslav leader, President Tito, died in May 1980, which may have changed matters. In addition, more than 60 countries withdrew from or boycotted the Moscow Summer Olympics, led by the United States, following the Soviet invasion of Afghanistan the previous year. Even if the coup had taken place, it might have packed much less punch in this context.

Despite this, the rollicking tale of the coup plot is significant, as it shows the willingness of Argentinian and South African intelligence  officials to co-operate, even to the extent of organising coups in the northern hemisphere. It reveals too the level of trust enjoyed between the militaries of these countries, their bravado in hatching such plans, and their naïvety in imagining that they could be successful. DM