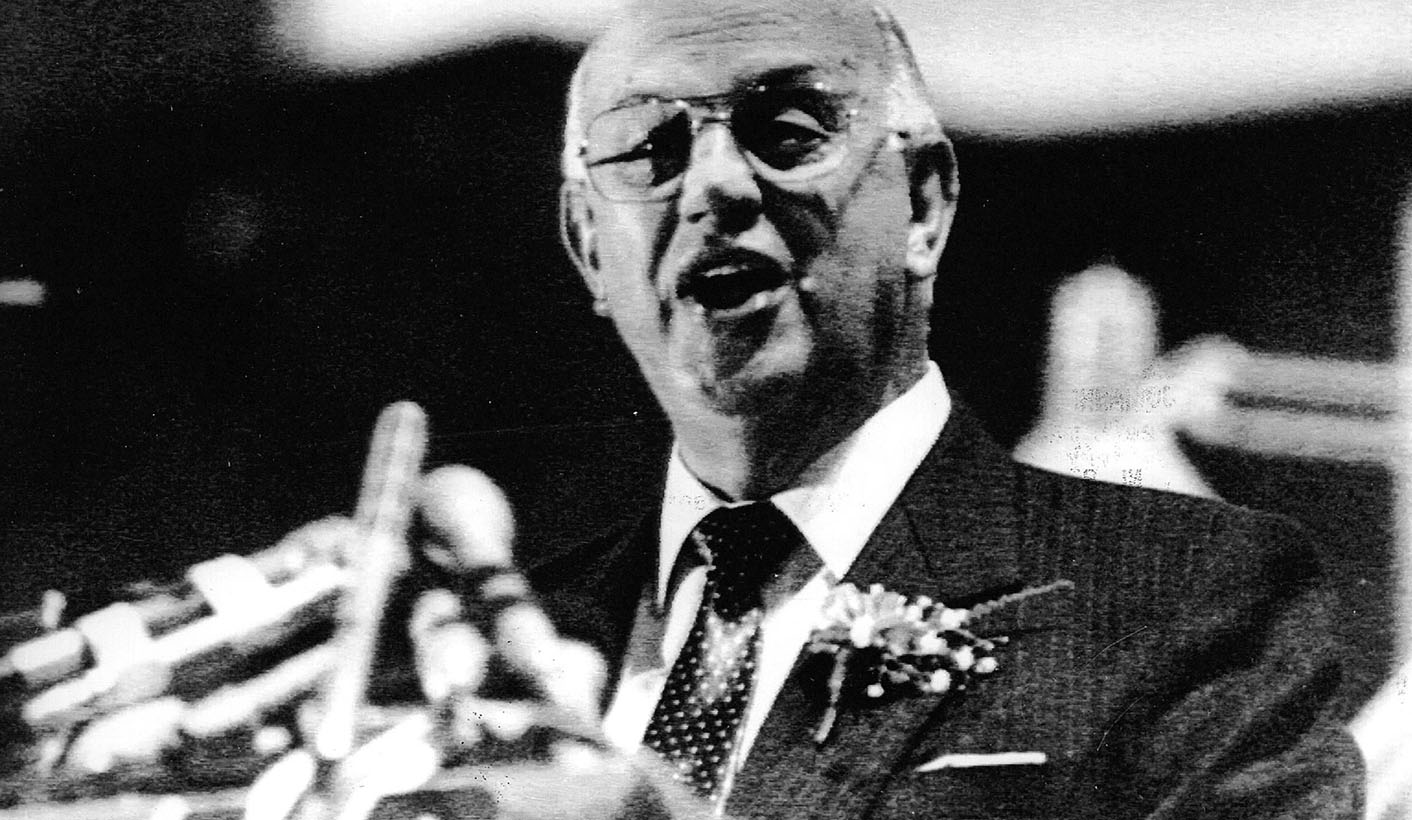 This is the 19th article in the the series, Declassified: Apartheid Profits. While researching the recently published book Apartheid Guns and Money: A Tale of Profit, Open Secrets collected approximately 40,000 archival documents from 25 archives in seven countries. This treasure trove contains damning details of the individuals and corporations that propped up apartheid and profited in return. Many of these documents were kept secret until now. Most remain hidden despite South Africa’s transition to democracy. OPEN SECRETS believes that it is vital to allow the public to scrutinise the primary evidence. This week we explore the close ties between the highly militarised pariah states of Israel and apartheid South Africa.

This past week Israel celebrated 70 years of the passing of the UN’s 1947 partition plan, making statehood a possibility the following year. On Twitter, an account retweeted by the Israeli foreign affairs ministry thanked all the countries that voted yes. One of those countries was South Africa under the Smuts government. With the advent of National Party rule in 1948  relations between the countries were strained for many years. This was unsurprising given the deeply anti-Semitic history of many National Party officials in this time, some of which had been members of the far-right Nazi sympathisers, the Ossewa Brandwag.

Despite this, as time passed both the apartheid state and Israel developed common strategic interests and crucially a shared feeling of unfair victimisation and isolation by the rest of the world. They also shared a history as oppressors – of Palestinians and black South Africans. As a result, cooperation, particularly in the arms trade, accelerated from the late 1960s. A particularly sinister aspect of this collaboration was a plan to co-develop nuclear weapons. As with North Korea today, apartheid South Africa was eyed with alarm as reports surfaced of nuclear tests over the South Atlantic and in the Kalahari desert.

By and large, the records detailing the alliance between Israel and apartheid South Africa remain under lock and key. Indeed, almost all of Open Secrets’ access to information requests to the Department of Defence pertaining to Israel were denied. However, what we have been able to piece together, building on the work of other researchers, shows a close and long-term relationship between the two. This was revealed in the book Apartheid Guns and Money.

The relationship was strongly centred around the arms trade. In the early 1970s, Israel was in dire economic straits as a result of the Yom Kippur war. At the same time, the apartheid state at war in Angola developed a growing demand for weapons. This was a perfect match of interests between pariah states. The records show that by 1975, with SADF and Armscor officials spending lengthy amounts of time in Israel, a decision was made to set up permanent shop in Tel Aviv. Echoing the secret Armscor office in Paris, the Tel Aviv office allowed the South Africans to bust sanctions under the cover of diplomacy.

A secret Foreign Affairs memo reveals that both Armscor and the Israeli defence authorities were committed to “ensure that the cover is as secure as possible.” Mr Jagoe who was “in charge of all Armaments Board [Armscor] projects in Israel” would be “known and listed as a Consul (Scientific)” under the Israeli Ministry of Culture. The Israeli officials thought this was the best way to ensure security for the undercover South African.

A secret South African Air Force (SAAF) report dated 19 March 1987 reveal the lessons learned over the next decade. The report reads like a “How To guide” for South African spies, detailing how Airforce personnel would travel to Israel under cover of a civilian alias identity complete with manufactured business cards, company details and a “front home address” that they were expected to learn by heart. Of particular concern was that the officials would be recognised by their accents or for “wearing typical SA clothing”. To mitigate this risk, officials were instructed to buy “civilian clothing” that would have to “be worn in the RSA for a minimum of three weeks prior to departure, during the visit and for a minimum of three weeks after returning to the RSA”.

All of these elaborate cover-ups were in support of the booming arms trade between the two states. From 1977, the year of the UN arms embargo, into the 1980s, South Africa was Israel’s biggest weapons customer. From 1973 to 1981, weapons sales to South Africa boomed from $70-million to $1-billion. This was a sweet deal for the Israelis who got much-needed foreign currency in return for technology, intelligence and collaboration in developing nuclear weapons.

This mutually beneficial partnership was based on emerging military, diplomatic and economic interests, but it was executed through personal relationships between high-level politicians. One example of this human element of the equation was a 1978 meeting between a South African diplomat tasked with relaying a message from PW Botha to the Israeli Minister of Defence, Ezer Weizman. In a top-secret report from the meeting, we get a glimpse into the messiness of international diplomacy that exists even among close friends.

The South African diplomat, referred to only as Jacobs in the document, had the unenviable task of relaying one of PW Botha’s characteristic undiplomatic rebukes. Knowing what was to come when they met in his offices, Weizman reportedly said: “I am prepared for the worst.” The diplomat then translated Botha’s written tirade from Afrikaans which accused Israel of “voluntary participation in political and psychological pressure on us.” To this, Weizman offered an apology and assurance that the two countries were united against shared enemies. He added: “I like Mr Botha very much. I came to like him better last time when we met and appreciate his straightforward and blunt way. He does not wishy-washy around.”

By the early 1990s, it was clear that white minority rule was in terminal decline as the negotiation process gathered pace. This meant that it was time to start dismantling some of the covert military operations between Pretoria and Tel Aviv. In a secret memo dated 8 June 1993, South African Military Intelligence laments that “their special relationship with Israel is nearing its end”. However, they were at pains to allay Israeli fears by assuring their counterparts in Tel Aviv that “Israeli military secrets known to the SADF could be kept safe after the transition”. Given our struggles to access military records on this collaboration, the South African military has kept this promise.

This document also provides an interesting window into how apartheid officials wanted to manage the complex transition and the prickly question of how the ANC would react to knowledge of such extensive collaboration. They advised that “it would be wise to inform appropriate leaders in the ANC of the nature of these projects and attempt to get them on board before they made this discovery of their own accord”.

Given what Open Secrets has been able to patch together from the fragments in the archive, it is no surprise that apartheid South Africa and Israel were as thick as thieves. Much of this important archive remains under lock and key. The documents provide a key insight into how two highly militarised states, threatened by international isolation, saw cooperation in both nuclear and conventional weapons as key to their mutual survival. As we have shown in this series, Israel was by no means the only government to collaborate with the apartheid regime – but it was a key military ally of a regime that perpetrated a crime against humanity.

Despite this there are many people who continue to deny this aspect of our shared history. We should remind them of the words of French philosopher and historian Pierre Vidal-Naquet, writing about the motivation for denialism of the Holocaust of European Jews and other minorities: “One revives the dead in order the better to strike the living.” We must not erase history. To do so serves to deny the suffering of many ordinary people. Instead we need to sharpen our gaze of the past, understand how it has informed the present and ensure that justice is sought to avoid its repetition. DM

Photo: A file photograph showing South African president PW Botha during his last election speech in Johannesburg, on 04 May 1987. Botha led white minority rule of the nation between 1978 and 1989. EPA/STF