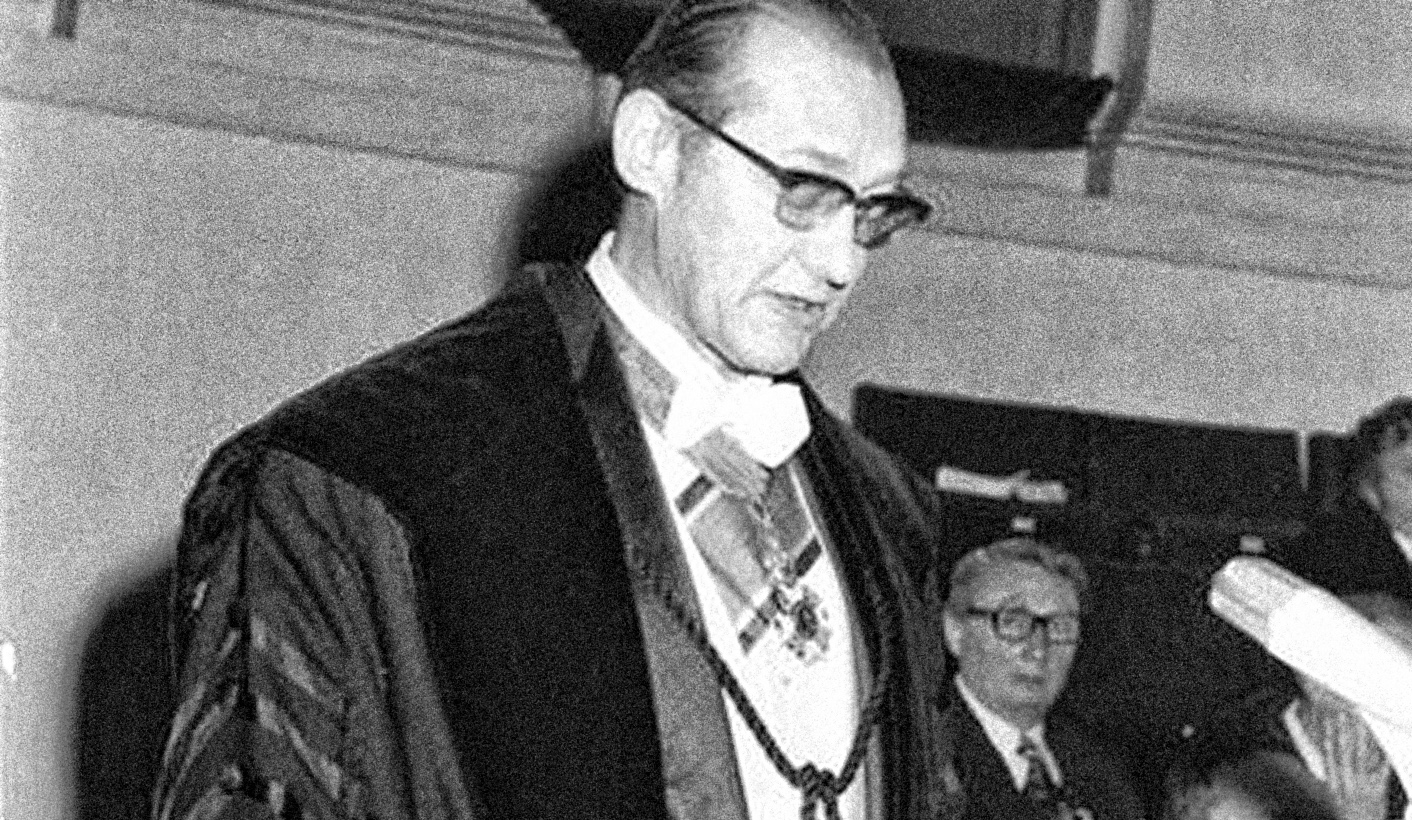 This is the fifth installment of Open Secrets’ series, ‘Declassified: Apartheid Profits’. While researching the recently published book Apartheid Guns and Money: A Tale of Profit, Open Secrets collected approximately 40,000 archival documents from 25 archives in seven countries. This treasure trove contains damning details of the individuals and corporations that propped up apartheid and profited in return. OPEN SECRETS believes that it is vital to allow the public to scrutinise the primary evidence. Here we invite you behind the scenes to look at the documents that informed the book. Last week we outlined the complicity of Swiss banks with the apartheid regime. This week we profile the Belgian banker André Vlerick, who was central to Pretoria’s relationship with one of its staunchest arms sanctions busting allies: Kredietbank.

In 1987, Zuid-Afrika – the magazine of Belgian pro-apartheid lobby group Protea – carried this crude and racist propaganda piece representing Archbishop Desmond Tutu holding a cross-shaped box, which on opening reveals a dagger hidden inside. Protea was by no means a fringe white supremacist group though. Rather, it was led by Belgium’s conservative political and business elite. Its president and founder, André Vlerick, also happened to be the Chairperson of the apartheid state’s primary bank for illicit arms transactions.

Yet if you type André Vlerick’s name into Google, you will not find any of this information. You will find references to a Belgian Baron who was a renowned politician, businessman and professor. You will also learn that he founded one of Europe’s oldest and most respected business schools, the Vlerick School of Management which has four international campuses and gives an annual award in Vlerick’s name. What you won’t learn about is Vlerick’s staunch support for apartheid South Africa. There is no mention of a bank in which Vlerick played a leading role for four decades and its alleged links to an international money-laundering scheme.

This is a history that has been kept in the shadows for far too long. It is a piece of the puzzle that helps explain how the apartheid government managed to smuggle half a trillion rand around the world to bust arms sanctions without anyone noticing. For this scheme to work, the regime needed the help of bankers who saw the profitability of maintaining white supremacy in South Africa. In André Vlerick, they struck gold.

André Vlerick was deeply embedded in the Belgian moneyed elite. He was associated with the Flemish Christian People’s Party and in 1972 was appointed as the Belgian minister of finance. In 1974 he joined Kredietbank, one of Europe’s largest banks that benefited from its close relationship with the politically well-connected in the Flemish North of Belgium. Vlerick served as Kredietbank’s deputy chairman until 1980 when he became chairman, a position he held until his retiremet in 1989. Kredietbank and its subsidiary in Luxembourg (Kredietbank Luxembourg) were central to apartheid’s secret global financial architecture. This story, largely unexposed until now, will be the focus of next week’s instalment.

To explain Vlerick’s willingness to lobby in favour of apartheid, one needs to understand that both profit and ideology were important motivators. Born into a wealthy Flemish Belgian family in 1919, Vlerick was adamant that the Flemish population in Belgium had historically been sidelined by the dominant French-speaking elite of the country. The perceived shared experience of struggling against a dominant class helps to explain Vlerick’s admiration for Afrikaner nationalism. His deep political conservatism and his pro-Flemish stance was tied to his defence of apartheid as a model for “separate development”.

These views were echoed in his 1979 impassioned defence of apartheid to the Commission on Justice and Peace, which was investigating the international banking sector’s investments in South Africa. In the commission’s report, he is recorded as saying, “Afrikaners have fought for their right of their nation and to remain as they are … If we in Belgium had established parallel development we would not be sitting with the well-known problems we have.”

Vlerick’s close ties with apartheid South Africa were strengthened through numerous trips to the country. During these visits, he often met with with the local political elite. In 1975, Vlerick and his wife received personal invitations to the presidential inauguration of Nico Diederichs. Vlerick’s relationship with Diederichs dated back to the 1960s when Diederichs was the South African minister of finance. Documents from the visit paint a picture of the five star treatment enjoyed by the Vlerick. They stayed at the Mount Nelson hotel in Cape Town, from whom they received a personal letter of welcome while being chaperoned by officials from the Department of Foreign Affairs. At a ceremony held at Anton Rupert’s residence of Fleur du Cap, they mingled with other international bankers who backed the apartheid state. There is no doubt that Vlerick was deeply embedded in an elite cabal of apartheid’s friends.

In 1983, on one of his many visits to South Africa and at the height of his bank’s work for the apartheid military, Vlerick met PW Botha. By all accounts, the two hit it off while discussing the policy of apartheid. The meeting was later described as the “high point” of Vlerick’s visit in a letter sent to PW Botha from the South African ambassador to Belgium. The ambassador continues to report Vlerick’s rather “naive” suggestion that “the [white] Afrikaners and Coloureds must integrate because they speak the same language”. His reported response was to remind Vlerick that this applies to the Flemish only because “they are still a homogenous nation with no people of colour.” For good measure he reminded Vlerick that integration would destroy the NP. Despite this, the ambassador is at pains to defend Vlerick; “we should not judge him too harshly, he does very good work for South Africa here [in Belgium] and is prepared to stand up and step into the breach for us.”

4. Dempsey to PW Botha_Thanks for Meeting Vlerick on Scribd

One way that Vlerick stepped into the breach for the apartheid regime was by setting up a powerful lobby group in Belgium called Protea. Protea acted as a pro-Pretoria propaganda mouthpiece. With Vlerick at its helm for 13 years, it drew its membership from Belgian conservative senators as well as two of Belgium’s two main banks, Kredietbank and Banque Paribas. In addition to wielding influence through a network of political connections, Protea published far cruder forms of pro-apartheid messaging, including the cartoon at the top of this piece on Archbishop Desmond Tutu, titled “Angel of peace or wolf in sheep’s clothing?”

Vlerick’s lobbying efforts extended to a pan-European formation called Eurosa. In addition to Protea in Belgium, there were “sister organisations” in Austria, Britain, Denmark, France, Italy, the Netherlands, Switzerland and West Germany. Evidence collected from Vlerick’s archive has established that Eurosa received direct funding from the apartheid government. In a letter to the South African ambassador, Vlerick revealingly wrote, “My colleagues and I of the executive council of Eurosa would be very grateful if you could, in the near future, let us know if the budget has been approved by Pretoria. Thereafter, we would like to speak to you about the manner in which the funds can be transferred to Eurosa.”

André Vlerick’s legacy remains untainted by his role as one of the apartheid regime’s most important allies. The documents here have outlined his ideological affinity for the apartheid model, and his willingness to manage extensive anti-sanctions lobbying efforts on the regime’s part throughout Europe. Perhaps more importantly, he was instrumental in helping facilitate Pretoria’s money-laundering scheme through Kredietbank. We turn to this in the next instalment.

History has been far too kind to the bankers and businessmen around the world who helped facilitate apartheid. If it weren’t for these individuals, whose interests were tied up in being the life support for a racist regime, it may not have survived as long as it did. We need to know their names and ensure that a simple Google search reveals their full stories. We may not be able to vote private profiteers out of power, but we can empower ourselves with knowledge of what lurks in the shadows of history. This is the first step towards accountability for injustices of the past and the present. DM