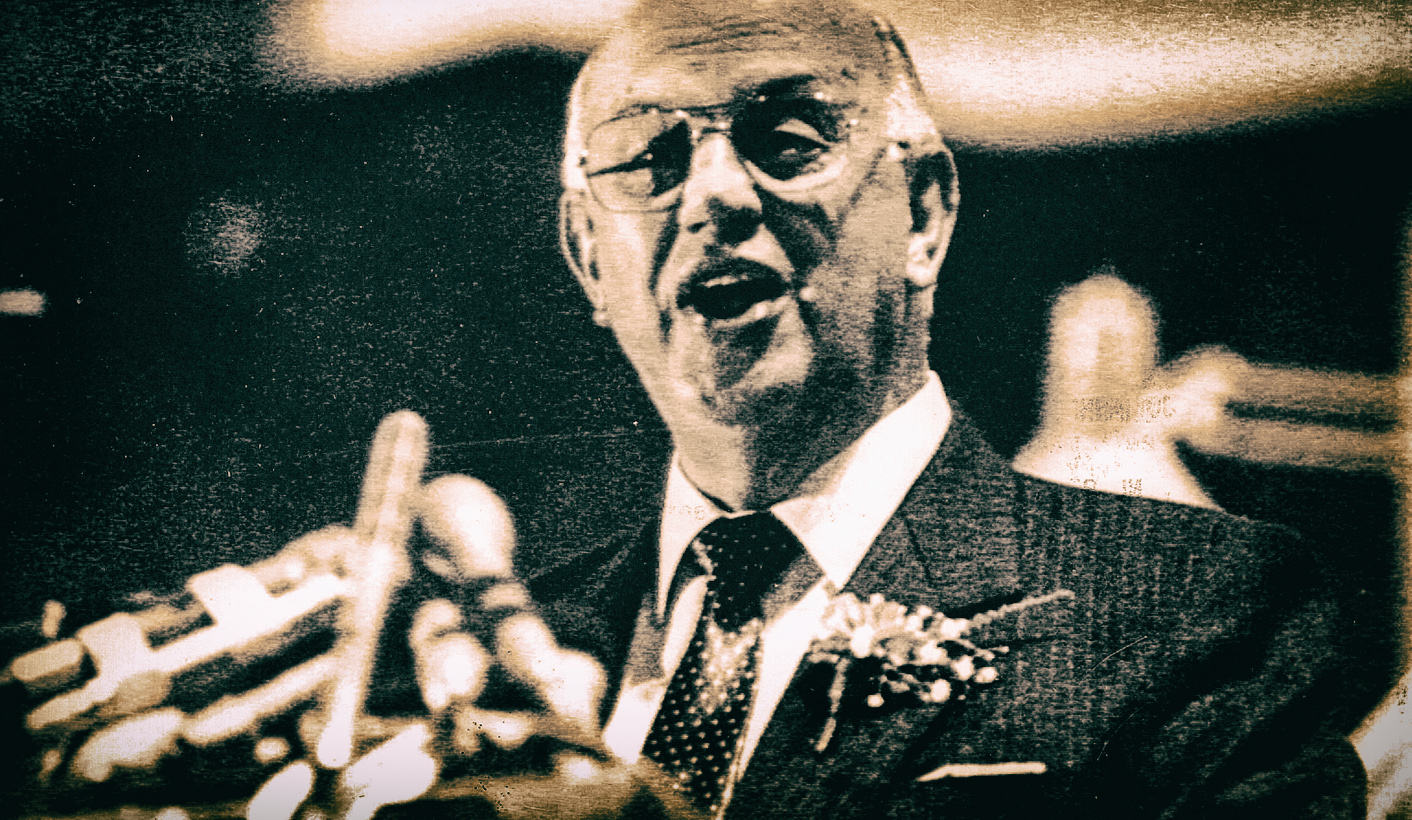 You are reading the sixth article in Open Secrets’ series, ‘Declassified: Apartheid Profits’. While researching the recently published book Apartheid Guns and Money: A Tale of Profit, Open Secrets collected approximately 40,000 archival documents from 25 archives in seven countries. This treasure trove contains damning details of the individuals and corporations that propped up apartheid and profited in return. Many of these documents were kept secret until now. OPEN SECRETS believes that it is vital to allow the public to scrutinise the primary evidence. Here we invite you behind the scenes to look at the documents that informed the book. Last week we profiled bigot and banker, André Vlerick, this week we take a look at the the bank behind the man.

In 1977 the United Nations Security Council imposed a mandatory arms embargo on apartheid South Africa. This was a potential blow to the war economy, and the apartheid regime needed a plan. Over the next 17 years, their solution allowed them to move nearly R500-billion (in today’s terms) around the world in near complete secrecy. With this they procured the  weapons and technology that fuelled wars in southern Africa, and domestic repression.

To do this, in addition to arms companies and foreign governments willing to bust the embargo, the apartheid military state needed an invisibility cloak for the movement of the cash. Who better to provide one than Kredietbank, a powerful Belgian bank headed up by key apartheid ally, profiled in last week’s piece, André Vlerick? As if ideological alignment wasn’t enough, Kredietbank had a subsidiary in Luxembourg, KBL, whose presence in the wealthy tax haven was key to this money laundering operation. Kredietbank and KBL were not the only banks that formed part of this arms money machine, but evidence alleges that they were one of the most significant players in this scheme.

This channel for moving large sums of money in secret was so successful in fact that the state-owned arms company Armscor was worried that it was being over-utilised, leaving them vulnerable in the case of detection. In a newly declassified report from 1980 found in the military archives, Armscor officials stress the need to diversify Armscor’s payment channels given reliance on the “overutilised Kredietbank Luxembourg channel.”

“As a result of the circumstances [sanctions]” the report continues, “the Paris [Armscor] office made significant use of the services of Kredietbank Luxembourg to make payments. The high concentration of payments through this channel is regarded as risky in the event that the implicated individuals at the bank should be identified.” The same report reveals that Kredietbank was also Armscor’s most significant source of foreign loans in this period, making up a full 25% of the arms company’s foreign loan portfolio.

The Paris office referenced here is Armscor’s clandestine office situated on the top floor of the South African embassy in Paris. This office, staffed with Armscor officials whose sole job was to manage illegal arms purchases throughout Europe, is the subject of next week’s edition of Declassified: Apartheid Profits.

These secret channels formed part of what we call the arms money machine, a sophisticated international system designed specifically to bust sanctions. For over two decades, this criminal enterprise laundered money through a global corporate and banking architecture involving hundreds of front companies in the secrecy jurisdictions of Panama and Liberia. Former Armscor officials have argued that it acted as a conduit for 70% of the cash used by South Africa to buy weapons illegally.

As we can see in the Armscor documents, at the centre of this criminal enterprise was Kredietbank’s subsidiary in Luxembourg (KBL). The bank did not just provide hundreds of numbered accounts, but were active accomplices in the conspiracy by setting up the front companies and providing nominee directors, some of whom were employees of the bank. Unsurprisingly, former officials who operated in the Paris office have alleged that the senior managers at KBL were intimately aware of this conduct.

As has been detailed in the book Apartheid Guns and Money, KBL managed payments through approximately 850 bank accounts. According to Martin Steynberg, an ex-Armscor official based in Paris, most of this money originated from Armscor’s accounts at Volkskas bank (now part of ABSA) in Pretoria. With the sign-off of the South African Reserve Bank, it then moved through a series of accounts held by various international banks to Luxembourg. Some of these accounts were in the name of front companies while others were numbered accounts held by KBL. The money would eventually be consolidated in KBL and Kredietbank accounts (so-called Armscor ‘main accounts’) before being paid to the arms suppliers. The purpose of this roundabout trail was to break and obscure the cash flow so that it couldn’t be traced back to South Africa.

Open Secrets found traces in the South African Defence Force archives of how KBL accounts were allegedly used for clandestine weapons trades. In 1983 and 1984, the military was purchasing small arms, ammunition and bombs from Communist China. To do so, they required falsified End User Certificates (EUC) from Zaire (now the Democratic Republic of Congo) to hide the fact that the weapons were destined for South Africa. In February 1984, two EUCs were purchased through a front company called Adam Export. As the invoices show, payment had to be made to numbered accounts held by KBL.

It seems likely that André Vlerick’s close connection to the National Party and senior officials like PW Botha in the 1970s and 1980s played a key role in bringing Kredietbank and its subsidiary close to the military establishment. However, KBL also needed a man on the ground in South Africa. Searching through PW Botha’s archive at the University of the Free State, the SADF archive in Pretoria and Vlerick’s personal archive in Leuven, Open Secrets identified this man as Leendert Dekker.

A chartered accountant by profession, Dekker was long-time senior director at Armscor before becoming a Pretoria-based consultant to a range of international banks, including Armscor’s international banking ally, KBL. He was appointed to Armscor in 1968 by PW Botha and served as its CEO from 1977 until 1979. In addition, from late 1977 Dekker helped to reshape Pretoria’s arms procurement operations as part of a small team based in the Department of Commerce and tasked with dealing with the problems posed by sanctions.

In correspondence between PW Botha and Dekker, it is clear that the two had a close relationship. At the time of Dekker’s resignation from Armscor, Botha wrote to thank him for his service. In the letter written in 1979, Botha writes, “You have made a great contribution to your country and more specifically Armscor, there is great appreciation for this. Your goodwill towards me will always remain a pleasant memory.” Dekker responded to thank Botha. In a handwritten note scrawled by Botha at the top of this letter from Dekker, Botha wrote, “NB: Remember him. We will need him later on.”

After leaving Armscor, Dekker set up a consultancy specialising in representing foreign commercial and financial institutions in South Africa. Shortly afterwards, Dekker became a Johannesburg- and Pretoria-based representative for none other than KBL. A position, according to the records, he held from 1982 until 2001. Dekker declined a request for an interview for Apartheid Guns and Money, arguing that he was still bound by Armscor’s secrecy provisions. He did deny that Kredietbank played any role in weapons procurement for apartheid, or in assisting in the provision of loans to Armscor, despite documentary evidence to the contrary.

Today Kredietbank goes by KBC Bank and is the 18th largest bank in Europe with 51,000 employees and 11-million customers across the globe. It survived the 2008 financial crisis through a Belgian government bailout and by selling off KBL to the Qatari investors for over €1-billion (R15-billion).

These powerful European banks have never been held to account for their role as accomplices in the crime of apartheid. The scope and scale of their involvement dwarfs the ABSA “lifeboat” matter, the subject of a recent controversial investigation by the Public Protector. This begs the question of why the story of apartheid economic crime has been reduced to a conversation about ABSA. The way in which that story is co-opted for narrow political purposes has distracted from the extensive collaboration of international financial institutions in our violent past, and the need to hold them to account.

Open Secrets, working with the Centre for Applied Legal Studies (CALS) at Wits will in the next few weeks announce next steps towards holding this bank to account. Such efforts are important because those who profited from criminality and apartheid must be held to account.

Equally we need to send a message to banks across the globe that their role as collaborators in corruption and state capture will no longer be ignored. DM

These documents are among the source material used in writing the book Apartheid Guns and Money: A Tale of Profit by Hennie van Vuuren,  published by Jacana Media

Photo: A file photograph showing South-African president PW Botha during his last election-speech in Johannesburg, South Africa, on 04 May 1987. EPA/STF