Declassified: Apartheid profits – the tap root of the National Party 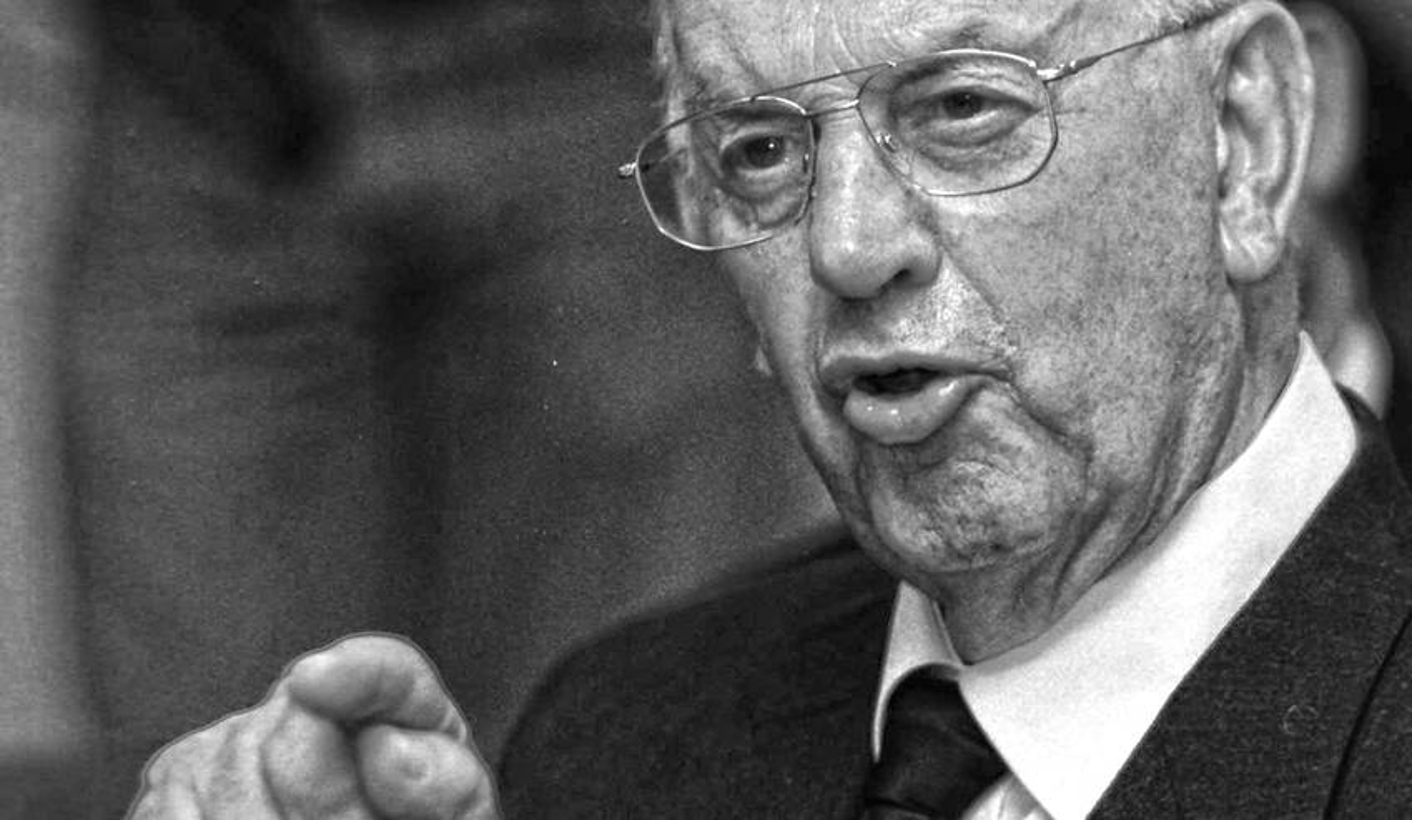 Welcome to the second instalment of Open Secrets’ series, Declassified: Apartheid Profits. While researching the recently published book Apartheid Guns and Money: A Tale of Profit, Open Secrets collected approximately 40,000 archival documents from 25 archives in seven countries. This treasure trove contains damning details of the individuals and corporations that propped up apartheid and profited in return. Many of these documents were kept secret until now. Most remain hidden despite South Africa’s transition to democracy. OPEN SECRETS believes that it is vital to allow the public to scrutinise the primary evidence. Here we invite you behind the scenes to look at the documents that informed the book. Last week we detailed a few of the corporations which bankrolled the National Party. This week we zoom in on Naspers – the media giant whose top management described it as the “tap root of the National Party”.

In 1981, South Africa was ramping up conflict in southern Africa. The ruling National Party (NP) also faced increasing internal resistance, both from the liberation movement and South African civilians.

Even as the turmoil grew, President PW Botha knew that there was an information war to be won and his first prize was white National Party voters. Botha took time out of the war in Angola to write to Piet Cillié, the chairperson of media giant Nationale Pers (Naspers), to complain about the “leftist propaganda” of the popular women’s magazine, Fair Lady. In a letter marked “personal and confidential”, Botha chastised Cillié about an article on Bishop Desmond Tutu and his wife Leah, published by editor Jane Raphaely. At the height of apartheid all dissenting voices, especially those of the likes of Tutu, had to be muzzled.

Botha expressed the government’s disappointment in the piece and demanded that Naspers “put an end to Jane Raphaely’s leftist politics”. He added, “I think that there is sufficient Nationalist sentiment amongst the Naspers management to put paid to these type of activities.” The acquiescent Cillié wrote back to signal his agreement noting that, “I trust in future there will be fewer reasons for disagreement.”

This is one of many letters where PW Botha berated media owners and editors alike about their content. Responses were usually timid apologies. This desperation to control information is familiar. The echoes of the past resonate powerfully today as we again face threats to media freedom. The NP, like some of the political elites today, relentlessly pursued control over public opinion. Propaganda and censorship were the order of the day.

With the SABC as state broadcaster firmly in the NP’s pocket, influence over the privately owned press became the primary target. Naspers and its stable of Afrikaans language newspapers was a key to the NP’s voter base. As leader of the Cape NP, Botha had sat on Naspers’ board from 1966 until around the time he became prime minister in 1978. In addition, documents show that the NP also held 74,000 shares in Naspers (in 1984) and so the fortunes of the ruling party and one of the dominant media houses were intertwined. Both prospered off the other’s fortune. These relationships are toxic not only because they allow those in power to control the media, but also because they allow private media companies to wield influence within government.

In a democratic South Africa the Gupta family-owned ANN7 and New Age are both backers of President Jacob Zuma’s clique and beneficiaries of their largesse through access to state resources. This is a powerful reminder of the deeply toxic nature of such relations.

Last week Open Secrets detailed a few of the private companies that funded the NP. Naspers was one of the most significant donors found in those files.

In a letter written to FW de Klerk on 17 August 1989, Naspers Managing Director Ton Vosloo reaffirmed the company’s support of the NP. Vosloo reminded De Klerk of a donation of R150,000 (approximately R1-million today) made to the NP before the 1987 elections. He also pledged a further R220,000 in support of the NP ahead of South Africa’s last race-based general elections in September 1989. Vosloo ended his letter, promising funding to the NP in Transvaal by adding that “our newspaper Beeld in the Transvaal is your ally and we trust that this formidable combination will wipe out the competition”.

In return for its financial loyalty, Naspers could count on revenue from government advertising and lucrative school textbook contracts. Yet there was a much bigger prize at stake. By the mid-1980s, Naspers had their sights fixed on a big portion of the licence to start South Africa’s first paid television service – M-Net (the forerunner of DStv). In a March 1985 letter to Pik Botha, the minister in charge of the process, and copied to PW Botha, Ton Vosloo forcefully lobbied for the contract, and unambiguously linked it to the ongoing propaganda work that Naspers could provide. He wrote, “This project also has another dimension for us, which has to do with the rapidly evolving daily newspaper situation in the Transvaal… I have had the opportunity to discuss this in depth with some of your colleagues… For us there is a direct link between the unimpeded revenue generated through a subscription TV project and its use in large scale Transvaal business. You will understand that we cannot continue with the completion of contracts for the aforementioned project, if there is not certainty concerning the income stream that  will fund it.”

This lobbying had its desired effect and the government awarded Naspers a 26% stake in the country’s first commercial TV service, M-Net. Vosloo was quick to thank PW Botha. In a July 1985 letter that also discussed strengthening support for the pro-government Citizen, Vosloo wrote: “Thank you for your leadership on the TV matter and your quick decision. I appreciate it. The decision now places the matter in a more certain trajectory.”

This deal proved to be incredibly lucrative for Naspers which grew its business into the DStv behemoth of today. These fortunes multiplied when Naspers bought close to a 50% share in the Chinese internet company, Tencent, in 2001. Today, Naspers remains one of the strongest shares traded on the JSE and is worth more than R1-trillion. While it is now Africa’s largest media and internet company with a global outlook, Naspers’ profits are undoubtedly rooted in the apartheid economy.

In 1992, Vosloo took over the reigns of Naspers as its chairperson. Under his leadership, Naspers management refused to appear before the TRC media hearings. This led the TRC chairperson, Archbishop Desmond Tutu, to ask, “Is silence from that quarter to be construed as consent, conceding that it was a sycophantic handmaiden of the apartheid government?” The atonement was left to 127 conscientious Naspers journalists who broke ranks with management and submitted to the TRC that their newspapers had acted as an NP mouthpiece. In 2015, when Vosloo retired, Naspers relented and apologised for its role in supporting apartheid. This corporate concession is rightly considered by many to be too little, too late.

The interests of media owners and that of politicians continue to overlap today. Naspers deserves singling out because it profited off apartheid. However, today Iqbal Survé’s Independent group of newspapers and the Gupta-owned media stable continue the practice of using newsrooms to their own advantage. South Africa deserves a far more democratic media landscape which is not beholden to corporate interests or the whims of politicians who continue to hang the sword of further “regulation” over editors. These are not just veiled threats to media freedom, but ultimately undermine our constitutional right to know. An informed public is far more likely to be able to tell the difference between disinformation and the #GuptaLeaks. This is what many politicians and media bosses fear the most.

At the time of his retirement from Naspers in 2015, Ton Vosloo reportedly said, “Journalism is the last line of opposition against the powerful, corruption and misdeeds. May our knees never weaken.”

Maybe he should have added “again”. DM

** Apartheid Guns and Money: A tale of Profit by Hennie van Vuuren is published by Jacana Media

Photo: Former President PW Botha gestures after an appearance in the George Magistrates Court in this January 1998 file picture. (Reuters)