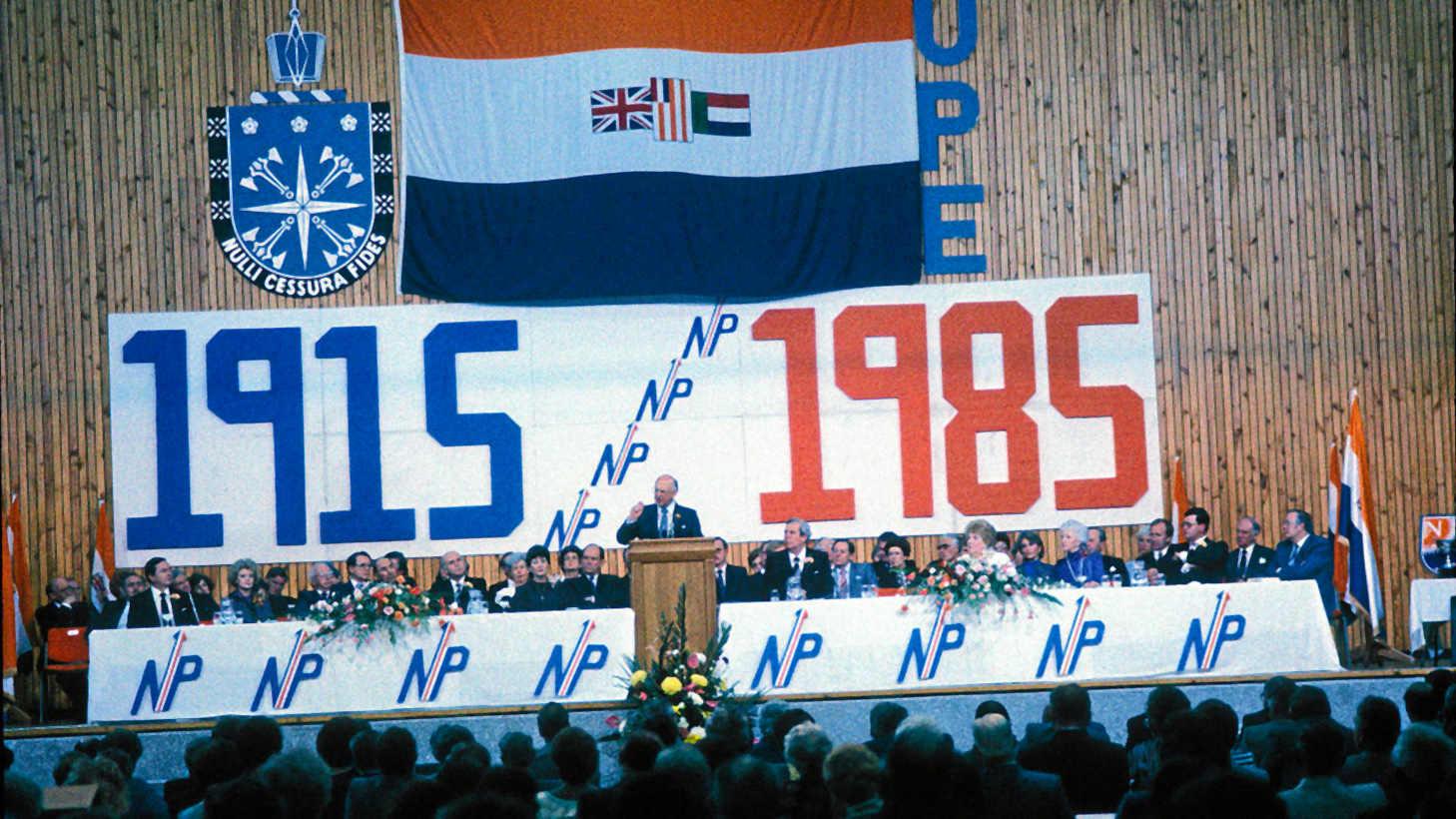 This is the third installment of Open Secrets’ series, Declassified: Apartheid Profits. While researching the recently published book Apartheid Guns and Money: A Tale of Profit, Open Secrets collected approximately 40,000 archival documents from 25 archives in seven countries. This treasure trove contains damning details of the individuals and corporations that propped up apartheid and profited in return. Many of these documents were kept secret until now. OPEN SECRETS believes that it is vital to allow the public to scrutinise the primary evidence. Here we invite you behind the scenes to look at the documents that informed the book. This week we zoom out and unpack some of the ways that the private sector colluded with the apartheid government to bust sanctions and some of the tools that made this possible.

In 1961 Nelson Mandela gave Prime Minister Hendrik Verwoerd an ultimatum: end apartheid or face increased resistance. Mandela was not only threatening domestic protest action, he was also calling for an international boycott against apartheid South Africa. Following the Soweto Uprising in 1976 and the death of Steve Biko in detention in September 1977, the UN Security Council upgraded the arms embargo to mandatory in 1977. These would be among the longest-lasting sanctions in modern international politics. They would be accompanied by a sustained campaign by the international anti-apartheid movement to block the sale of oil and computer technology that could be used by the South African military. Key exports of raw materials such as coal and gold were also vulnerable to sanctions.

The apartheid government colluded with the domestic and international private sector to set up a secret international network to bust these sanctions. These networks required the complicity of large international banks and prominent South African corporations to play their role. Busting sanctions to fuel the apartheid regime meant breaking international laws, but it also meant huge profits for those involved. We can now reveal aspects of the sanctions buster’s toolbox.

Safair and SAA – Guns in the hold?

The first of these are the aircraft that covertly carried weapons for the apartheid regime. Several declassified military and military intelligence documents reveal that the then cargo freight airline, Safair, was used extensively to ship weapons for the military during the 1970s and ‘80s.

Safair is today a fully private company and owns FlySafair, one of South Africa’s leading low-cost airlines. Its pleasant pink and blue livery camouflages the airline’s roots as a gun runner for the apartheid regime. Its name crops up in documents referencing the movement of weapons for the South African Defence Force (SADF) via countries such as Zaire and the Comoros.

However, one of the most damning pieces of evidence is a 1981 letter from Armscor Vice-Chairman John Maree to Defence Minister General Magnus Malan. Maree had been seconded from the private sector to Armscor to strengthen links between the two, which he undertook with much success. He went on to lead Eskom for a decade, starting in the late 1980s.

1. SAFAIR_Letter From John Maree to Magnus Malan by Daily Maverick on Scribd

In the letter, Maree makes proposals to Malan, on behalf of Armscor, concerning the commercialisation of the airline. He reveals that the original fleet of 16 cargo aircraft were procured with the “full support of the State”. Safair is described as a “commercial front” that was necessary to create a ruse to convince the US Department of Trade and Industry to supply the aircraft during a time when that country’s laws limited such transfers.

However, with growing US pressure to limit the sale of aircraft and spare parts to the South African military, Maree argues that it is “essential that Safair establishes the image of a bona fide trading concern to prevent it from being classified as a state or military corporation”. One of the measures proposed was that Safair be granted a commercial aircraft licence with Malan requested to intervene with the Minister of Transport to ensure that this happened without any tough questions being asked.

There is much to suggest that Safair was not the only airline used by the military. As we have shown in Apartheid Guns and Money, lingering questions remain as to whether the South African Airways Helderberg plane that crashed into the Indian Ocean off the coast of Mauritius in 1987 was carrying weapons or military material. The tragedy, which claimed the lives of 159 people, has been the subject of numerous enquiries and recent renewed allegations that the flight was carrying smuggled weapons or components for the South African government. Much evidence points to that possibility.

In 1991, FW de Klerk set up the Khan Commission to investigate the National Party (NP) government’s secret projects. Some of the findings from the Khan Commission were revealed to the public during the Truth and Reconciliation Commission (TRC). However, the Khan report itself has inexplicably remained secret, along with many other documents submitted to the TRC. With the help of the South African History Archive (SAHA), this document from the TRC archive at the Department of Justice was finally released in 2016.

The Khan report revealed a number of covert operations set up to circumnavigate sanctions. Central to these efforts was Pik Botha’s Department of Foreign Affairs and its sanctions busting unit headed by diplomat Marc Burger. In his autobiography Not the Whole Truth published shortly after his death in 2012, Burger talks about sanctions busting as if it were a thrilling adventure. His partner in crime was a prominent South African businessman who went by the alias “Owen”. Open Secrets was not able to confirm Owen’s identity, but there was no doubt that he was key to opening doors for Burger. Together they created over 600 covert operations in seven years that obscured their apartheid origins.

Many of the secret fronts were revealed in the Khan report. One of these was the Taussig Family Trust based in the wealthy tax haven of Lichtenstein and referred to by its codename “Project Blue”. This served as a conduit to secretly funnel funds around the world to bust sanctions. The trust had belonged to a German family whose patriarch had died on board the Titanic. According to Burger, “This fairly prominent Jewish family had suffered a variety of tragedies before Nazi Germany extinguished the last survivors in the Holocaust.” One of the trustees was Casimir Prince Wittgenstein, a conservative German politician who would be prosecuted for fraud in the 1990s linked to a party funding scandal and a Lichtenstein bank account.

Project Grail was a covert operation designed for the South African government to buy a major international computer data storage company in the US in late 1980s. This ensured that despite international sanctions, South Africa could access a steady supply of computer technology. The required funds were channelled through the Taussig Family Trust. According to Burger, the front man for this operation was a South African living overseas, by the name of Barry, “who was a rising star in computers”. The company is said to have subsequently become a significant international player in the computer industry and attracted among its clients intelligence agencies including one from what Burger termed a “nuclear power” that was on friendly terms with South Africa – and that he claimed was unaware of the company’s true owners.

Project Six Pack included plans to build a port in southern Turkey accompanied by a coal-fired power station. According to the Khan report, this project was to be financed by Taiwan and the World Bank and would allow South African businesses access to domestic markets in Turkey and re-export opportunities. This proposed blue water harbour was a pet project of Turkish Prime Minister Turgut Özal and had the initial support of South African coal mining companies before they lost their appetite for co-operation with the end of sanctions in sight.

Information found in newly declassified top-secret Military Intelligence files sheds light on plans to build a sanctions-busting port not only in Turkey but also in the Turkish-controlled northern part of Cyprus. The project, unimaginatively named Tulband (Turban), involved working with the Turkish government of Northern Cyprus to construct a port. As the May 1985 memo reports, “Personal contact with the President [Rauf Denktas] has been established and the biggest advantage is that the President has approved our use of the free port of Famagusta. Use of the port is dependent on co-operation with the South African private sector for the establishment of storage infrastructure in the harbour.”

The apartheid regime lived beyond its years because of the elixir of life delivered through sanctions-busting. The private sector was instrumental in helping the NP government to open up and maintain these secret channels of international trade.

Much like today, the public sector is spoilt for choice when it comes to private interests willing to partake in nefarious schemes in return for profit. This ensures that some individuals in government and business benefit at the cost of ordinary citizens. This can only work if these deeds continue to be shrouded in secrecy. The allegations of impropriety in the Gupta-linked companies, with their chorus of Zuma acolytes, tied to state contracts are examples of the continued corporate complicity in alleged crimes. Such transactions continue to rely on dodgy middlemen and corporations to turn a blind eye to crime. There is abundant evidence of continuities of practice between apartheid and the current allegations of state capture.

While we live in a different country, the struggle against impunity is far from over. DM

Open Secrets is an independent non-profit with a mission to promote private sector accountability for economic crime and related human rights violations in southern Africa. www.opensecrets.org.za. Open Secrets welcomes the submission of material or information that could shed further light on the issues we have investigated.

Apartheid Guns and Money: A Tale of Profit, by Hennie van Vuuren, is published by Jacana Media