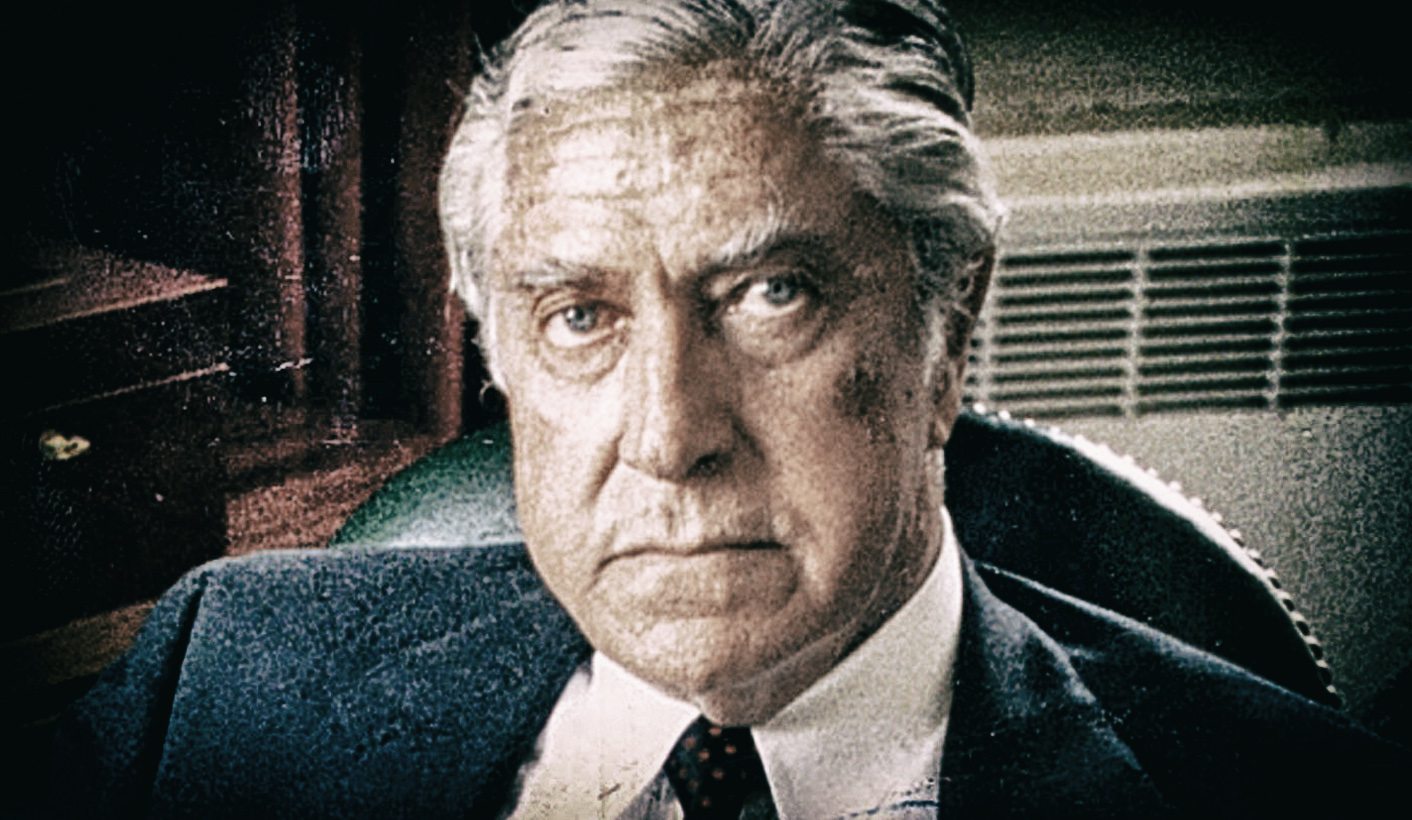 Welcome to the 12th article in the series, “Declassified: Apartheid Profits”. While researching the recently published book Apartheid Guns and Money: A Tale of Profit, Open Secrets collected approximately 40,000 archival documents from 25 archives in seven countries. This treasure trove contains damning details of the individuals and corporations that propped up apartheid and profited in return. Many of these documents were kept secret until now. Most remain hidden despite South Africa’s transition to democracy. OPEN SECRETS believes that it is vital to allow the public to scrutinise the primary evidence. This week we turn to British businessman Tiny Rowland, and another of Pretoria’s international allies: Margaret Thatcher’s United Kingdom.

The 16th of August 2012 is a date most South Africans will never forget. It was the day that police shot and killed 34 mineworkers and injured a further 78 on a koppie in Marikana. This was the single largest use of deadly force against civilians in South Africa since the Sharpeville Massacre in 1960. The mineworkers were struggling for a living wage. A struggle that was met with live ammunition from the police who shot many of the protesting mineworkers in the back as they turned to flee. The Marikana massacre will remain one of the most shameful moments in Jacob Zuma’s scandal-ridden presidency.

The mining company at the centre of the tragedy was the British platinum giant, Lonmin. It was later revealed that Cyril Ramaphosa, a powerful Lonmin shareholder and future ANC, and South Africa’s, Deputy President, had urged “concomitant action” that led to the brutal crackdown against the striking miners. At stake for Lonmin was the supply of cheap black labour that allowed it to reap mega-profits on the platinum belt. The massacre brutally underscored that Lonmin would stop at nothing to uphold its historical modus operandi of profiting from exploitation.

Lonmin was formerly the London and Rhodesian Mining and Land Company (Lonrho), incorporated in 1909 and synonymous with British capital expansion in Africa. For over 30 years from 1962 the company was controlled by Roland “Tiny” Rowland. Rowland was a controversial British business tycoon described in 1973 by Conservative Prime Minister Edward Heath as “the unpleasant and unacceptable face of capitalism”.

Born in India in 1917 to a British mother and German father, Rowland lived in Germany in the 1930s where he had a spell in the Hitler Youth, and later in Britain where he attended an elite boarding school. During both world wars, his parents were interned in detention camps and Rowland himself was interned during WWII on the Isle of Man. These experiences stoked Rowland’s long-held mistrust for the British establishment which would never dissipate.

Newly declassified South African Military Intelligence records show that as early as 1975 Rowland was a middleman and source of intelligence for the apartheid regime. Since the late 1940s, Rowland had been based in Zimbabwe – then Southern Rhodesia – and had fervently cultivated relationships with Africa’s new political elite. The strategy paid off, and when independence swept through Africa, Rowland was rumoured to have better contacts among the new heads of state in Africa than British spy agency MI5. These connections ranged from Muammar Gaddafi in Libya to Zambia’s Kenneth Kaunda, and made him the perfect spy.

Rowland was able to combine these connections with his insider status in the UK and the US, in order to act as the perfect middleman. This is echoed in briefings given by Rowland to apartheid defence officials in the 1970s. The records reveal that Rowland had met with the number one and two in the US State Department, Henry Kissinger and Joseph Sisco, to discuss the role of Unita in Angola.

On reporting the meeting to the South Africans, Rowland confirmed that Kissinger had proposed bribing the Portuguese with an $80-million loan to delay their withdrawal from Angola in order to buy time for the South Africans by a few months. The SADF was at this time heavily engaged in the Angolan conflict. Clearly they trusted this intelligence, and viewed Rowland as a useful ally. In 1975, South African military intelligence noted his extensive connections in African and Arab countries, including claims that he had a former secretary of the Organisation for African Unity (OAU) “at his service”. Rowland indicated that Saudi Arabia backed apartheid South Africa “100%” and spoke of a payment of $2-million made by the US to Egyptian President Anwar Sadat, possibly in connection with the looming conflict in Somalia at the time.

Conveniently for the South Africans, Rowland was also particularly close to the leader of Angola’s Unita rebels, Jonas Savimbi. Rowland would transport Savimbi between meetings with Reagan officials in the US, and back to “bolt-holes” throughout Africa. Such trips were sometimes paid for by the South Africans.

Rowland helped garner support for Savimbi from the US, South Africa and, as revealed in a newly declassified secret Military Intelligence memo, from Margaret Thatcher’s British government too. The memo, authored by Marquard de Villiers – who was Rowland’s “man” in South Africa, outlined details of a lunch-time appointment in January 1982 between Thatcher and Rowland at the British Prime Minister’s invitation. Over lunch, as the memo reports, Thatcher delivered the “good news” of her personal support for “us” [Pretoria and Lonrho] in support of Savimbi. Going a step further, Thatcher promised to relay this support to US Secretary of State Alexander Hague in Washington DC.

While often formally criticised by the British establishment, Rowland was able to gain the ear of Prime Minister Thatcher in moments like these and seemingly push an agenda with relative ease.

Rowland’s ability to cultivate such vast networks among the rich and powerful has long been put down to his extended association with British Intelligence. Indeed, it was thanks to former MI5 agent Sir Joseph Ball that Lonrho first hired Rowland. In addition, one of the members of Rowland’s Lonrho board, at least until 1973, was a confirmed MI6 agent. Rowland was also in close contact with Bill Casey, the head of the CIA (and key apartheid ally, as outlined in last week’s piece in this series), and the deputy chief of Israel’s Mossad, David Kimche. These connections made Rowland the perfect resource for Pretoria both in terms of receiving information and in buying weapons.

The first record of Lonrho’s involvement in helping procure arms for the apartheid regime is from 1978, a year after the compulsory UN embargo was adopted. Lonrho offered to assist with their contacts in West Germany to obtain armoured vehicles.

This continued into at least the mid-1980s when Rowland arranged for Dr Marquard de Villiers – a cardiologist, Lonhro local manager and Rowland’s general man on the ground in Pretoria – to meet David Kimche. Before becoming head of Israel’s spy agency, Kimche had been the director general of Israeli Foreign Affairs and was well connected within the Israeli establishment. Via De Villiers, Kimche offered to help Rowland get his hands on US-made Stinger surface-to-air missiles also known as Red Eyes, if South African-backed Unita forces needed them. At the meeting it was evident that the offer to assist the SADF extended to making contacts for them in Abu Dhabi and facilitating the use of Mozambique as a sanctions busting channel.

It is tempting, given Rowland’s highly public and controversial profile, to dismiss him as an anomaly within British business circles. However, despite his cultivated outsider status, Tiny Rowland was very much an insider. He was a businessman who leveraged his powerful international networks to his advantage to turn a profit. He epitomised the rise of a modern capitalism that seamlessly conflates business and politics.

Rowland’s mutually beneficial relationship with the apartheid regime ended with his empire sinking its first platinum mineshaft on the Highveld. Yet like so many apartheid middlemen, he traversed elites, offering to buy the ANC a newspaper in 1993 to assist for the impending elections. For this and other services, Rowland was awarded the Star of South Africa by Mandela’s government in 1996.

While Rowland’s actions may have faded from public memory, his legacy and that of his corporation have not. The miners and widows of Marikana attest to this. We need to find a new way of doing business, where characters like Rowland and those that followed cannot extract profit through clandestine dealings and back-door deals with political elites. We have not done enough to challenge this legacy of apartheid. DM