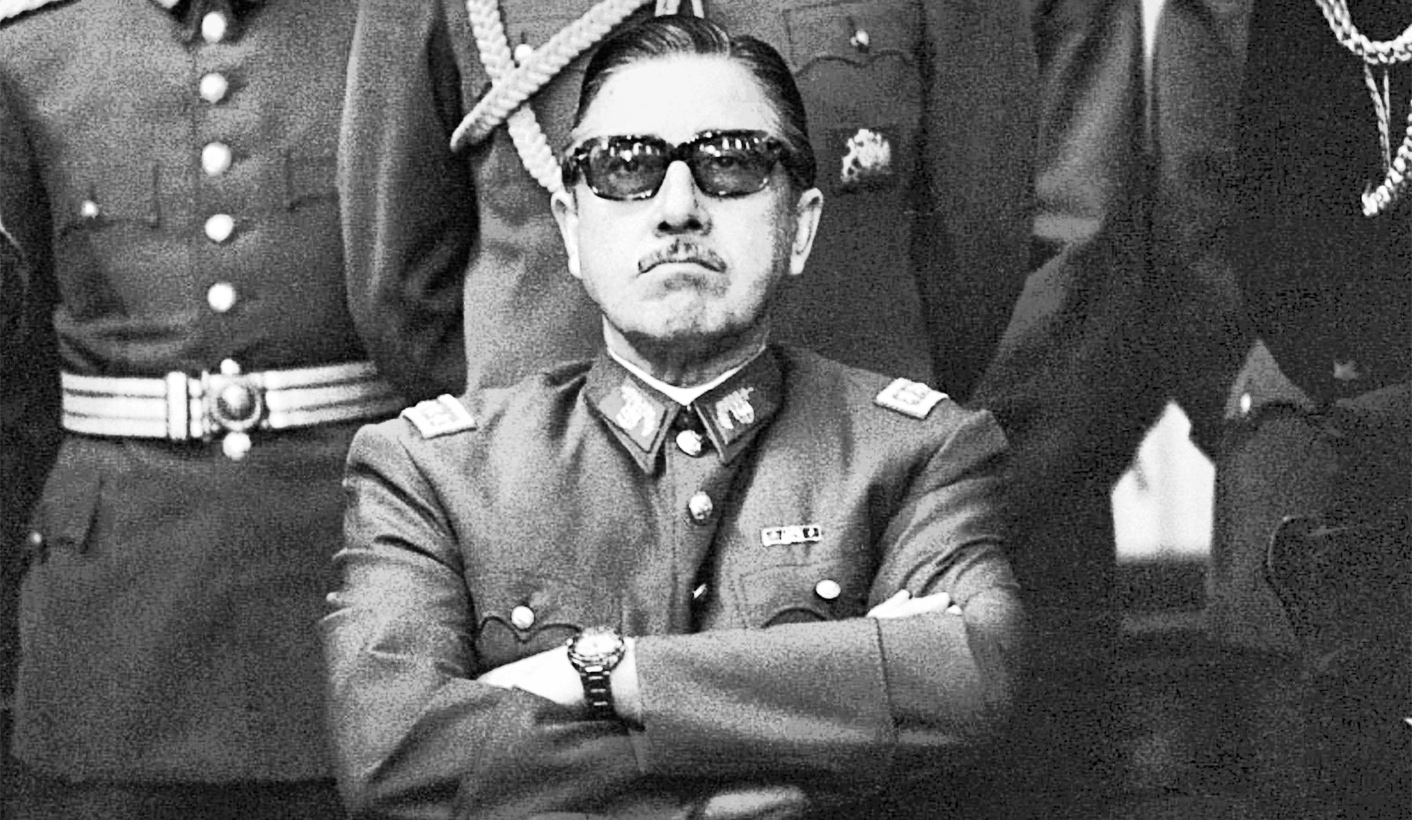 This is the 18th instalment in the series, ‘Declassified: Apartheid Profits’. While researching the recently published book Apartheid Guns and Money: A Tale of Profit, Open Secrets collected approximately 40,000 archival documents from 25 archives in seven countries. This treasure trove contains damning details of the individuals and corporations that propped up apartheid and profited in return. Many of these documents were kept secret until now. Most remain hidden despite South Africa’s transition to democracy. OPEN SECRETS believes that it is vital to allow the public to scrutinise the primary evidence. This week we take a look at the close friendship between Augusto Pinochet’s brutal regime in Chile and apartheid South Africa.

The Declassified series, based on the book Apartheid Guns and Money, has aimed to expose the way many countries around the world were duplicitous when it came to apartheid. They publicly condemned South Africa, but kept the back door open through clandestine military intelligence links, usually for the sake of profit for them and their corporations. When it came to Pinochet’s Chile, however, there was no need to hide. Despite their many differences, the two regimes were bound by their mutual pariah status in the international community, and their commitment to brutality and human rights abuses at home.

Augusto Pinochet came to power in Chile in 1973 through a CIA-backed coup, ordered by President Nixon. Pinochet deposed democratically elected President Salvador Allende and embarked on 17 bloody years of military rule. Pinochet’s rule would become defined by extrajudicial killings, torture, repression and corruption. It should come as no surprise, then, that apartheid South Africa found a close ally in this regime.

Pinochet’s rise was key to the relationship with apartheid officials. Recently declassified documents show that when a referendum threatened to end Pinochet’s rule in 1988, the South African ambassador in Santiago considered the potential impact of a progressive government in Chile. He wrote that in the event that “the so-called skunk status of the two countries is left out of the equation”, there is very little that would bind them together. Located far away from each other, the countries did not share strategic interests “other than strong anti-communism and the problem of Cuban-supported terrorism”.

1. Chile and SA_end of Pinochet

Despite this, during the 1970s and 1980s, apartheid South Africa collaborated extensively with the Pinochet regime on the weapons trade and intelligence sharing. Beyond a biannual intelligence conference, the apartheid regime saw its relationship with Chile as a gateway to a lucrative South American arms market. In 1986, Adriaan Vlok, then South Africa’s deputy minister for defence and of law and order, travelled to Chile to attend the Feria Internacional del Aire (FIDA) arms fair. Vlok, who would later gain notiority as PW Botha’s Minister of “Law and Order”, was accompanied by a delegation from the state-owned arms company, Armscor. Their itinerary included cocktail parties, visits to military shipyards and meetings with many high-ranking officials.

Upon returning to South Africa, Vlok wrote to thank General Fernando Aubel “for the hospitality extended to me and my entourage during our visit to the Republic of Chile”. He continued, “I return to my own country with a sincere admiration of the people of Chile and would like to assure you of my continued support and firm commitment to try and contribute to further improving the excellent relations between our two countries.” We interviewed Vlok for Apartheid Guns and Money and asked his thoughts on why apartheid’s close friends were countries with appalling human rights records. He responded candidly, “I never asked such questions, I am not that type of person.”

These military connections were borne out in a range of ways. Both countries awarded their respective highest awards to each other’s top military officials. In turn, during the 1980s, Pretoria only sent retired army generals to act as ambassadors in Chile. Considering that both countries were facing embargoes, part of the collaboration agenda was sanctions busting. Indeed, Chile acted as a proxy for Pretoria to gain access to weapons that they couldn’t get on their own. Chile’s proximity to the USA and the CIA’s support for Pinochet made it easier for it to get access to weapons and intelligence that the South Africans were coveting.

This was exemplified in March 1988 when the South African Air Force (SAAF) electronic warfare team visited Chile. Defence intelligence files reveal that the reason for the visit was to view an advanced electronic reconnaissance system that the Chilean Air Force had developed with extensive help from the Americans. The Chileans needed Soviet equipment to test the effectiveness of this new system and the SAAF had conveniently captured some Russian radar.

A plan was hatched between the two to use South African aircraft operational in Namibia and Angola to test the equipment. Yet the South African chief of staff intelligence described the real prize for the South Africans, namely that the co-operation was “a golden opportunity to expose the SAAF to the best American technology currently available outside America”.

The South African military could turn to Chile for quite specialised assistance. During an interview for Apartheid Guns and Money, Chris Thirion, a former senior South African Military Intelligence official, confirmed that he had a “very good relationship” with the head of Chilean Military Intelligence. He went on to explain that during the border war with Angola, the SADF needed Spanish speakers to translate intercepted communication between Cuban MiG fighter jet pilots. When plans to use civilian Spanish speakers fell through, the SADF turned to their friends in Chile. Unsurprisingly, the Chileans were happy to lend a hand and sent a number of their own pilots to the border between Namibia and Angola to serve as translators for the South African army.

The mutual collaboration between Pretoria and Santiago wasn’t confined to the military. Just as popular domestic resistance to apartheid was growing, the relationship between the two countries’ domestic police forces also grew stronger. The SADF’s military attaché in Santiago was asked to give talks about South Africa’s security police on such a regular basis that there were considerations to place a permanent police attaché in the country. Vice-versa, the head of the Carabineros, the infamous Chilean “paramilitary police” force, Rodolfo Stange Oelckers, was invited by Magnus Malan to visit South Africa on Armscor’s ticket in 1986. It is telling that these regimes were so eager to share notes on domestic repression.

The apartheid government, through propaganda, painted themselves as outsiders, misunderstood by the rest of the world. This status meant that they found natural allies in other pariah states, such as Chile. These kinds of relationships could be out in the open and weren’t burdened by the hypocrisy of many of South Africa’s other clandestine international friends. Pinochet’s Chile was characterised by a right-wing agenda, state-sponsored violence and systematic human rights abuses. This made it the perfect home away from home for the apartheid regime and its officials. It is a prescient reminder of the dark nature of the apartheid regime, one that found its closest friends in regimes involved in systematic murder. DM