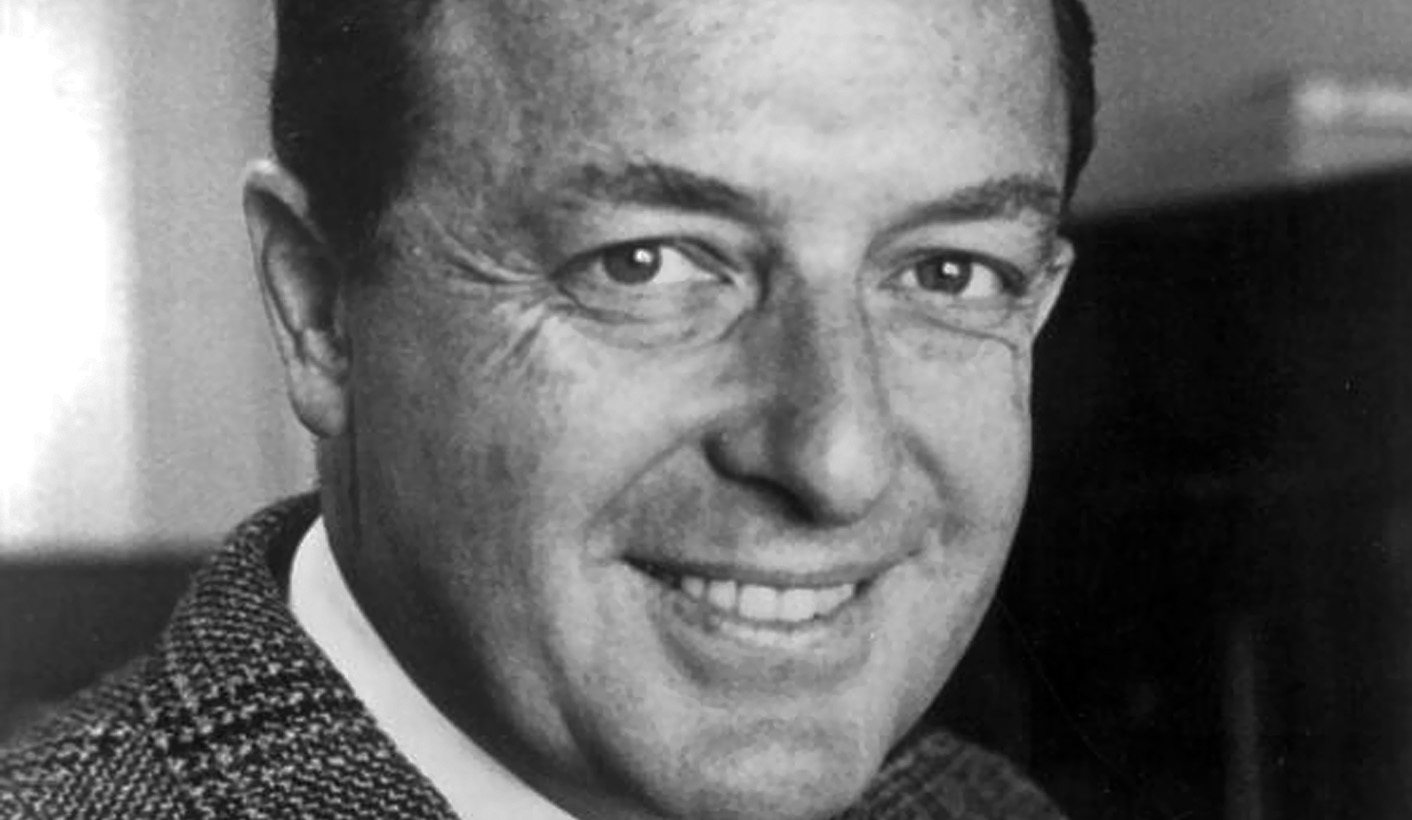 Welcome to the 10th article in the series, Declassified: Apartheid Profits. While researching the recently published book Apartheid Guns and Money: A Tale of Profit, Open Secrets collected approximately 40,000 archival documents from 25 archives in seven countries. This treasure trove contains damning details of the individuals and corporations that propped up apartheid and profited in return. Many of these documents were kept secret until now. Most remain hidden despite South Africa’s transition to democracy. OPEN SECRETS believes that it is vital to allow the public to scrutinise the primary evidence. In this instalment we take a look at how a former United States senator sought to become a paid apartheid propagandist.

As Bell-Pottinger has shown us, “reputation management” often has a darker side. Repressive and reprehensible regimes and conmen almost always need the support of public relations firms to help them clean up their image – the Guptas, Chilean dictator Augusto Pinochet and the Assad family in Syria have all used their services. In return for spreading misinformation and deception, PR firms and consultants profit handsomely.

Unsurprisingly, the apartheid government was one such repressive regime willing to splash cash on propaganda. International image consultants such as Bell Pottinger have played a role in South African politics long before the Guptas became a household name.

The United States under Ronald Reagan offered fruitful possibilities for apartheid spies and arms dealers to strike back-room deals with conservative groups. We turn to these relationships next week. Public relations allies were often less clandestine and while some were fringe racists, many were old Washington DC operators from both sides of the political aisle. These DC insiders, including senators and diplomats, were the apartheid government’s guns for hire in an information war.

In August 1985, the South African embassy in Washington DC was approached by former Democratic senator of Florida, Richard Stone. Stone was strongly anti-communist, and following his stint as a senator was a Reagan-appointed diplomat in Central America. In exchange for a hefty fee, Stone offered the South Africans a propaganda deal disguised as “a programme of public diplomacy”.

His plan of action included diverting “media attention away from sceptical treatment of reform efforts” made by the apartheid regime. Instead, he offered to “focus media attention on the violent and radical nature” of the ANC. His offer put in motion years of back and forth with the apartheid government and prominent South African businessmen. These top secret foreign affairs documents reveal how unscrupulous lobbyists such as Stone saw profitable business opportunities in disguising repression.

To prove he was up for the job, Stone boasted to the South Africans about his public diplomacy work with José Napoléon Duarte’s repressive regime in El Salvador. In a memo labelled “top secret”, the South African embassy reported that Stone had been so successful in EL Salvador that “Duarte’s government is able to fight and win the war against the guerillas unhindered by American media attention”.

This was not the only bloody item listed on Stone’s CV. From 1981-2, Stone had worked as a paid lobbyist for the right-wing Guatemalan government of Fernando Lucas García, who had come to power through a 1978 coup.  García’s regime, armed in part by Reagan’s government, was responsible for killing tens of thousands of their citizens, most of whom were indigenous Mayans. This background made Stone an obvious choice to be Reagan’s special envoy to Central America in 1983. His role in the region was providing support for right-wing groups who were staunchly anti-communist and more often than not guilty of a litany of human rights abuses.

Stone must have been pretty convincing, because before long plans were being made for him to visit South Africa. In a secret memo to the South African Department of Foreign affairs on 28 February 1986, arrangements were made to put Stone “in touch with selected business and government leaders” in South Africa to “discuss the feasibility of his proposal”.

Stone had stressed the importance of making contact with the South African business community. This was part of his plan to set up a pro-apartheid lobby organisation that could give the appearance of being “independent” from the apartheid state. The proposal suggested that the group should be led by South African business leaders as they “possess the necessary legitimacy” and would create “perceived independence” from both the US and South African governments. The proposed organisation would be called the “Coalition for Reform in South Africa” with its headquarters in the American capital.

Not all the interactions were plain sailing though. Stone’s initial fee was a staggering $50-million, which had the South Africans taken aback. By April 1986 he had agreed to reduce it to $1.2-million. This discrepancy led to suspicion among the South African business elite, who had shown interest in the deal. This group of business leaders had initially expressed “interest in contributing to an independent pro-South Africa lobbying group”, like the one imagined by Stone.

According to official documents, in October 1985 many of those in this elite group had visited Washington DC. Included in this group of prominent South African industrialists were PG Glass’s Bertie and Ronnie Lubner; Eric Samson of Macsteel, Bennie Slome from the Tedelex Group and Graham Beck, whose range of business interests included coal mining, but who is better known for the wine label that still carries his name.

To understand their willingness to help improve South Africa’s image abroad, bear in mind that the mid-1980s saw a debt crisis fuelled by political unrest and an increasingly successful and well organised international anti-apartheid movement. Stone’s proposal also followed just two months after PW Botha’s infamous Rubicon speech where he appeared to double down on the status quo and spurn anticipated reforms. Hence, when Stone proposed to help mitigate the negative perceptions of apartheid abroad, there was much interest from business leaders, who were threatened by the instability of the moment.

Arrangements were made for Stone to visit South Africa in 1986 so that both Pik Botha, then minister of foreign affairs, and prominent business leaders could meet him and evaluate his “proposals comprehensively and critically”. Among the businessmen identified by the government “who are prepared to be involved in helpful initiatives” were Harry Oppenheimer, Basil Hersov, Donald Gordan (Liberty Life), Albert Wessels (Toyota) and Johann Rupert. The backdrop to this campaign was the imminent passing of anti-sanctions legislation in the USA. Stone’s role was likened to that played by Swiss banker, Fritz Leutwiler, who had acted as an intermediary between the apartheid state and Swiss banks.

4. Nature of Stone’s Visit to SA

Whether Stone’s proposal was ever put into place is unconfirmed. When contacted by Open Secrets for the book Apartheid Guns and Money to comment on the details of his intended trip, Stone deflected by talking about South Africa as if he had only ever been there on safari. “I recall going to South Africa and looking at a lot of wild animals,” Stone said over the phone, “It was an impressive sight.” A convenient loss of memory for the lobbyist. However, what the plans do reveal is Stone’s willingness to protect repression from public scrutiny for the right price. By doing so, he became part of the machinery that helped to keep apartheid living far beyond its years.

Today, the fight over “state capture” has reached a fever pitch and includes an information battle in which paid lobbyists and certain media outlets play a significant role. The public have witnessed disinformation, misdirection and propaganda, not unlike apartheid’s hired guns in Washington DC. The driving motive for the spin doctors, hired guns for the venal and corrupt, remains profit. This is regardless of what the consequences are for the people of South Africa. These spin doctors spread lies and fake news in defence of the indefensible. Where they are the most prolific, as we have seen during white nationalist rule under apartheid, they represent clients who neither support rational arguments nor enjoy the support of the majority of the people they claim to represent. DM

Editor’s note: This article has been updated. The main photo was changed for accuracy.

Photo: Portrait of US Senator Richard B. “Dick” Stone, between 1975 and 1980. Photo: State Archives of Florida, Florida Memory.