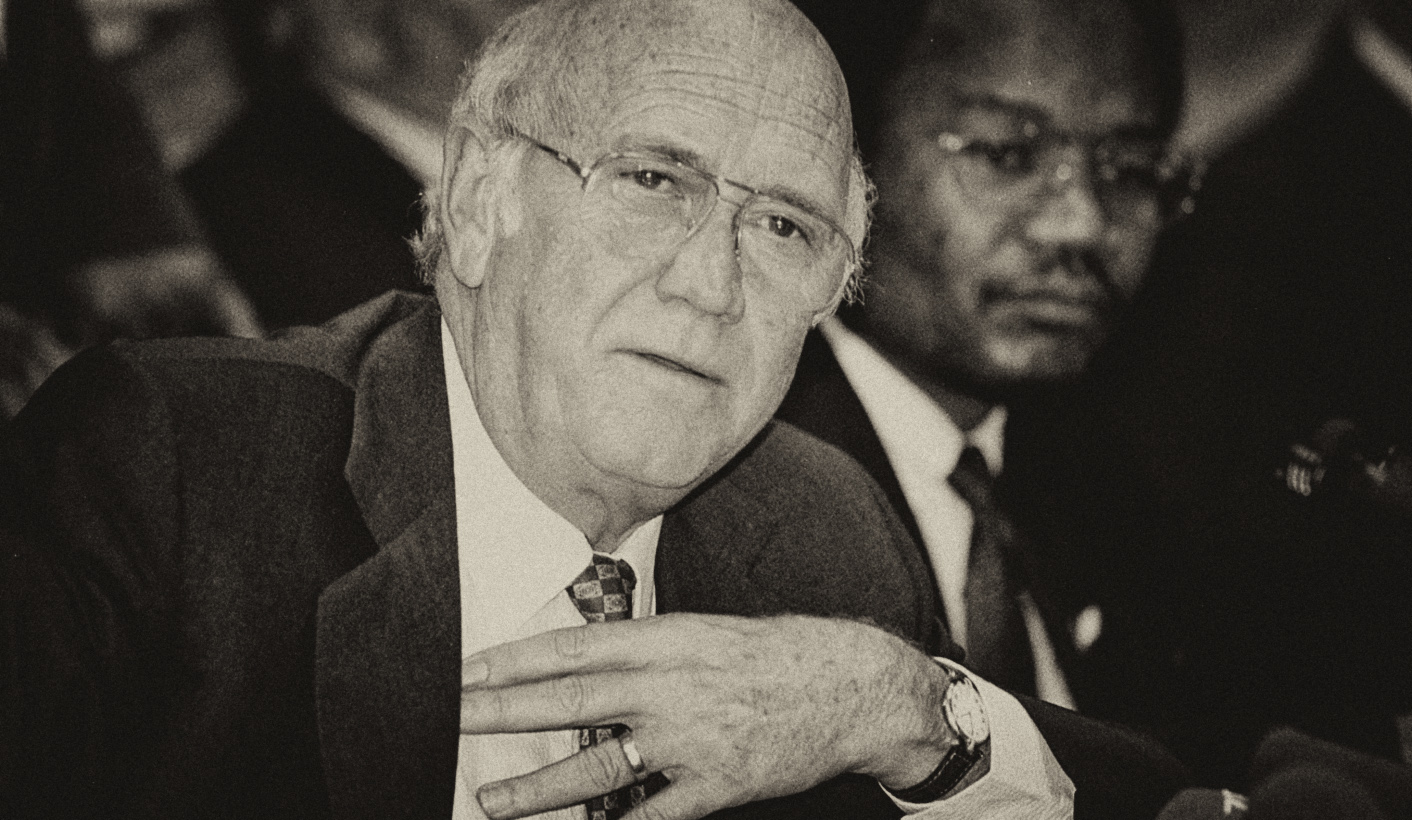 While researching the recently published book Apartheid Guns and Money: A Tale of Profit, Open Secrets collected approximately 40,000 archival documents from 25 archives in seven countries. This treasure trove contains damning details of the individuals and corporations that propped up apartheid and profited in return. Many of these documents were kept secret until now. Most remain hidden despite South Africa’s transition to democracy. OPEN SECRETS believes that it is vital to allow the public to scrutinise the primary evidence. Here we invite you behind the scenes to look at the documents that informed the book.

The Archive for Contemporary Affairs, a four-storey brown facebrick building at the University of the Free State in Bloemfontein, is an unassuming place. Yet its 3.5km long shelves of files contain some of the shadiest secrets from South Africa’s past. Many of the National Party’s (NP) most prominent politicians sent their collections, including official NP documents, to this archive. There is no longer a National Party, and it is unclear whether anyone really wants to “own” this memory of oppression that delivered so much paperwork. It is nonetheless a national treasure worthy of far more attention by researchers from across the country.

Despite reading through hundreds of folders from PW Botha’s and FW de Klerk’s archives, the Open Secrets team never expected to be delivered a series of folders marked “National Party donations”. Out of the folders came the signed cheques, fawning letters of thanks and promises of anonymity that secretive party funding demands. Around 70 individual donors were identified in these pages.

The names in the folders? Some of South Africa’s most prominent businessmen, past and present, a few of whom we highlight. While the story of party finance is often revealed only through whispers, in this unassuming archive we had found indisputable documentary evidence. The letters featured here provide a glimpse into the complicity between big business and the oppressive apartheid regime that was, until now, kept secret.

Some donors were unsurprising, given their long-term complicity with the regime. In a letter written in 1988, FW de Klerk informed PW Botha of a R50,000 donation from Barlow Rand (now trading as the large conglomerate, Barloworld). De Klerk notes, “They prefer to keep their contribution confidential…” before stating that one of the companies directors, D.E. Cooper, would handle the donations. Barlow Rand was one of the chief suppliers of technology to the government. Between the 1960s and 1980s the corporation’s leadership sat on PW Botha’s Defence Advisory Board, all the while presenting itself as an enlightened opponent of apartheid. The two-faced nature of many of these corporations and their executives is a theme that runs throughout this collection.

Another name in these documents who has continued making super profits in a democratic South Africa is Shoprite businessman, Christo Wiese. Currently tied in fourth place with Johann Rupert on the Forbes list of richest Africans and living in a mansion in Clifton, Wiese was also eager to support the NP and “anxious” to have this support made known to the prime minister. In 1989, Minister Kent Durr sent a letter to the newly appointed President, FW de Klerk, informing him of Wiese’s financial support. Durr fondly describes Wiese, then the director of the clothing retail giant Pepkor, as “an old friend and supporter of the National Party”.

Of course, as the Guptas’ Saxonwold Shebeen has shown us, these relationships also require a more personal touch. This is captured perfectly in a letter sent by prominent PG Glass executive chairman, Bertie Lubner. In the letter, written to PW Botha dated 23 June 1982, Lubner writes to thank the prime minister for “a very wonderful evening which we spent with you, charming members of your family and other guests”. He proceeds to write of how much he admires Botha’s leadership of the country: “It is men with such high ideals and determination like yourself that create history.” Post-apartheid amnesia ensured that at the time of his death last year, Lubner was praised as a beloved philanthropist and iconic business leader with far too little said about his support for the establishment during apartheid.

This letter and others of a similar nature from Bennie Slome of Tedelex and Macsteel’s Eric Samson were some of the more surprising finds in the archive. This is because these men were widely known as part of the self-proclaimed liberal English-speaking business elite of the time. Though perhaps this surprise is misplaced – big business motivated by profit notoriously funds whoever is in power.

We also found letters of support from Altech (now electronics giant Altron) head, WP (Bill) Venter. A long-time ally of the apartheid military, Venter made profits supplying the military with missile systems and other key technology at the height of apartheid’s war in Angola and cross-border raids. To return the favour, Venter made hefty donations to the NP. In 1982 he pledged R150,000 (R2.4-million in today’s terms) with promises of more to come which he honoured in 1985 and 1989 with generous donations of R200,000 (R2.2-million in today’s terms). In the letter Venter points out the success that his company has achieved, adding, “…we believe that we would be able to achieve very little without the firm support of the current [NP] government…”

In February 2017, Venter finally stepped down as Altron chair and was praised for his contribution to the South African economy. His collaboration with the apartheid state was conveniently ignored.

The Truth and Reconciliation Commission (TRC) concluded that many businesses “benefited financially and materially from apartheid”. While many businesses presented themselves as victims of apartheid and part of an enlightened opposition to apartheid, these letters tell a different story. They reveal a complicity with the NP government, and show that a significant portion of the business elite kept the taps open to the party at the height of domestic repression and foreign wars. It also allows us to go beyond the broad brushstrokes of the TRC and have a more nuanced conversation about the degrees of complicity within the private sector.

As the #GuptaLeaks have shown, South Africa is still struggling with the undue influence of the private sector in politics; it is vital to understand the nature of these networks. South Africa desperately needs a private sector that can create jobs but it also requires far more effective enforcement of the laws governing private sector misconduct.

This is an important message as Parliament has now finally begun the process of drafting a law that could for the first time regulate the private funding of political parties. The success of this process and the enforcement of these rules is vital to ensure that the powerful and corrupt are limited in their use of secret funding to undermine democratic politics and buy political favours. Secret funds fuelled the National Party’s machinery – we cannot allow it to continue to be a conduit for entrenching political and economic inequality in South Africa. DM

To gain access to apartheid’s secret records our partners at the South African History Archive (SAHA) relied on requests made under the Promotion of Access to Information Act (PAIA). Many of our requests remain outstanding, forcing us to turn to the courts. We continue to demand the release of the apartheid archive. For this purpose, SAHA will be meeting the South African Reserve Bank on 4 August at the South African High Court, Johannesburg Division.

The Archive for Contemporary Affairs at the University of the Free State does not require any PAIA requests to access documents.

Open Secrets is an independent non-profit with a mission to promote private sector accountability for economic crime and related human rights violations in Southern Africa.

Photo: National Party (NP) leader and former State President F.W. de Klerk announces his retirement from politics August 26, 1997. De Klerk, who has led the NP for the past 8 years said that he was leaving partly to help the party overcome the stigma of Apartheid. Photo: Reuters