Level 1 is in sight, a vaccine trial restarts and the S... 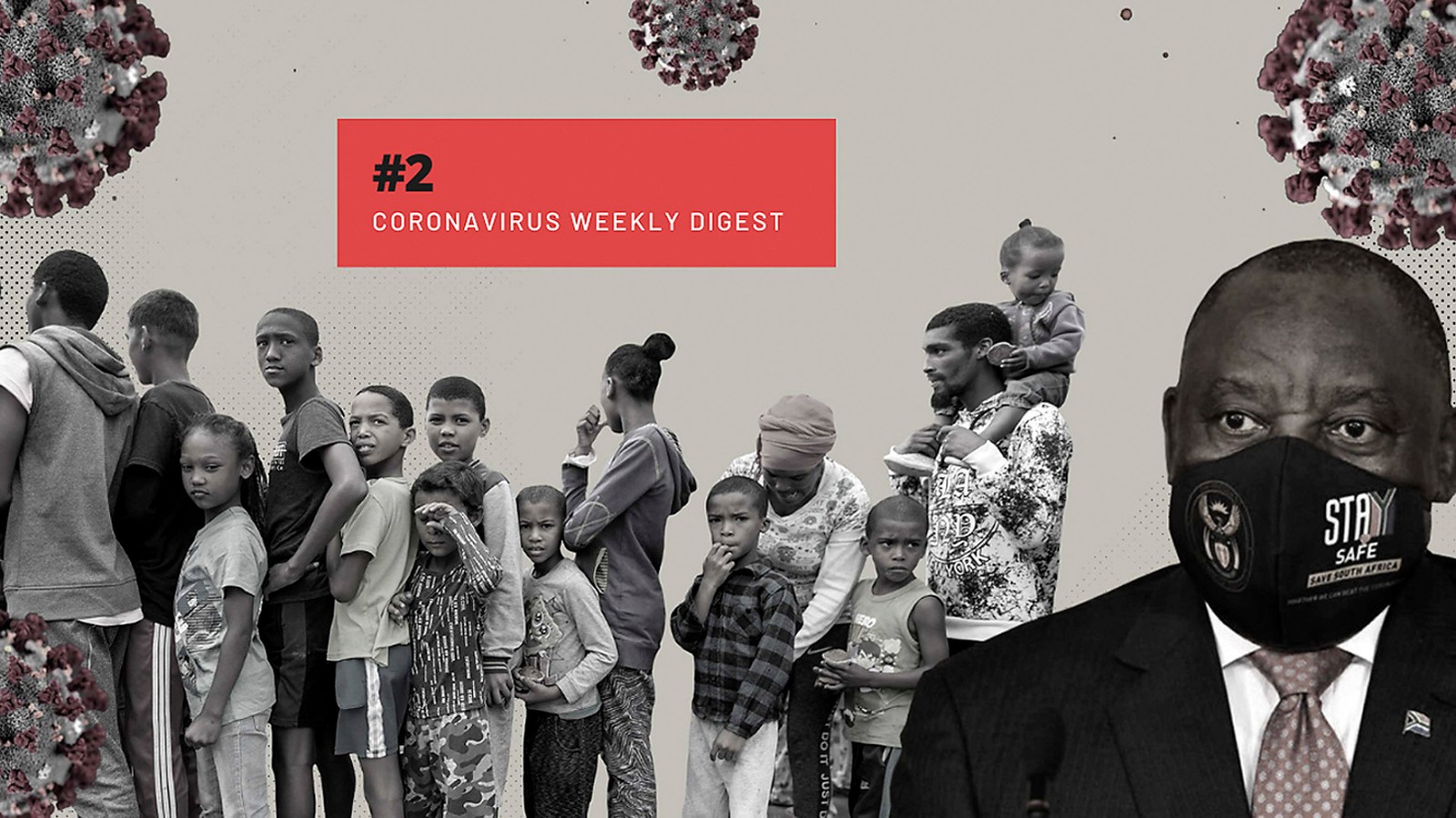 In the past week, South Africans learnt more about where the country stands in the pandemic. Meanwhile, the economy is poised to reopen even more. A vaccine trial restarted safely and yet more government failures have been exposed in the Eastern Cape.

Where is South Africa in the pandemic right now?

Covid-19 may have already infected 20 million people in South Africa, according to vaccinologist and member of the ministerial advisory committee, Prof Shabir Madhi, during a Daily Maverick webinar on Sunday.

In addition, it seems likely that the number of Covid-19 deaths have been underestimated. However, there have been relatively low hospitalisation and death rates. Nevertheless, Madhi says the country is not yet in the clear and it would be “premature” to return to normal.

Other African countries have also recorded Covid-19 death rates lower than expected. While the pandemic is not over for the continent, some medical researchers are trying to understand why this might be. Kerry Cullinan spoke to them about the interplay of age, herd immunity and data.

On Tuesday, the South African National Institute for Communicable Diseases declared the multisystem inflammatory syndrome in children a notifiable medical condition. This means healthcare workers are obliged to inform authorities when they make this diagnosis.

The syndrome is a hyper-inflammatory immune response in children and teenagers who have already contracted Covid-19. It is rare and potentially deadly. There have been numerous suspected cases in South Africa, but none have been fatal. Elna Schütz spoke to doctors about symptoms, detection and treatment.

Meanwhile, South Africa resumed its leg of the international Oxford Covid-19 vaccine trial. The SA Health Products Regulatory Authority and two local ethics committees gave their approval this week after the trial was restarted in the United Kingdom at the weekend.

The trial was paused almost a week ago after an independent data and. safety monitoring committee recommended a review of the case of an ill patient. Maverick Citizen spoke to participants, and a member of the oversight committee, on what the next steps are and what impact the pause might have on the trial.

On Wednesday, President Cyril Ramaphosa announced that the country would move to Level 1 of the lockdown on Monday 21 September. This means international borders can open in places, larger social gatherings can take place, the curfew has been shortened and liquor stores can open from Monday to Friday. More details will be announced in the next few days by the relevant ministers.

Ramaphosa celebrated the gradual but steady decline in new infections, hospitalisations and deaths, but warned that a “devastating” second wave is still possible. Greg Nicolson outlined the new rules and solicited reactions from opposition parties.

As Sasha Plating writes, the aviation industry is champing at the bit at the prospect of safely flying passengers once again. Airlines have submitted their operating procedures and Covid-19 protocols for approval. Meanwhile, the tourism industry is already at work for “a different summer season”.

Maverick Life has just kicked off its series on day trips to help South Africans safely ease out of isolation and make the best of spring. First stop: the blooming West Coast National Park.

New research exposes the impact of the pandemic

On Tuesday, the Gates Foundation released a report estimating that the pandemic had set the world back 20 years in its efforts to meet the United Nations’ development goals.

The 2020 Goalkeepers Report estimates that extreme poverty will increase by 7% and that vaccine coverage has dropped to levels last seen in the 1990s. It has also unequally affected women financially and limited their access to lifesaving medicine. As Ufrieda Ho writes, its findings have implications for South Africa too.

Gangs in South Africa and Kenya have used the lockdown as an opportunity to target children for recruitment. While lockdown initially limited recruitment, the gradual easing of restrictions left school-going children even more vulnerable. Recent research by the Global Initiative Against Transnational Organised Crime compares the driving forces of this trend in both countries.

The Eastern Cape department of social development has blamed IT problems and the lockdown for the fact that no subsidies have been paid to large parts of the NPO sector. However, as Estelle Ellis reports, this is the third year that organisations have struggled to get their subsidies.

On Friday, Eastern Cape Health MEC Sindiswa Gomba and outgoing superintendent-general, Dr Thobile Mbengashe, were due to appear before a special tribunal to explain the R10-million scooter contract to the Special Investigating Unit. The tribunal wants an interdict to stop any payments under the contract. As Estelle Ellis writes, the scooters were procured with emergency money intended to finance the province’s Covid-19 response.

Reopening the economy slowly but surely

The South African Reserve Bank has not cut the repo rate further and it will remain at 3.5%. In addition, it has revised its GDP forecast from 7.3% to 8.2%. As Ed Stoddard writes, the SARB did note some “bright spots” in the economy.

The Western Cape has hailed the resumption of international travel, but warned that the devil is in the detail of new travel regulations. It has committed to scrutinising the new rules to determine whether major events such as the Mining Indaba can go ahead, and how to help the tourism industry ensure certainty, consistency and safety. As Suné Payne writes, the province has been vocal in calling for the reopening of international borders.

Meanwhile, the major donors of the Solidarity Fund want it to continue operating beyond lockdown. The fund has raised R3.08-billion to support relief efforts during the pandemic and lockdown. As Rebecca Davis reports, the fund has released another report on its spending – this time including that for PPE, while also addressing gender-based violence. It said that when the time comes, it will shift its focus to other projects such as possibly funding the roll-out of a Covid-19 vaccine.

On Wednesday, artists marched nationwide to demand an easing of restrictions on audience sizes and revised criteria for relief funding. The lockdown has slashed income, triggered retrenchments and closed the doors of many institutions and organisations. Sandisiwe Shoba reports.

Meanwhile, protesting asylum seekers and refugees face repatriation or local integration once the temporary Covid-19 shelters in which they are housed close their doors in Cape Town. It’s been nearly a year since the protest against xenophobia began, and the group pleaded for resettlement to other countries.

This is currently the only set of options on the table as the City of Cape Town, the South African Human Rights Commission and the Department of Home Affairs have all failed to submit reports to Parliament on time, or didn’t submit them at all. Sandisiwe Shoba unpacks the current plan.

Living with a pandemic

Although Khayelitsha has about 10% of Cape Town’s total Covid-19 cases, it has only about 45 active cases now. Healthcare workers have seen a drastic drop in the number of people wanting to be screened for Covid-19 – however, they fear this suggests complacency about the virus. As Siyabonga Kamnqa reports, Covid-19 safety precautions seem to have been largely abandoned, but not everyone is feeling so relaxed.

In Nelson Mandela Bay, runner Godfrey Jacobs missed the chance to conquer the Two Oceans this year because of Covid-19, but he still has his sights set on an epic race: to run the almost 40km between Uitenhage and Port Elizabeth to raise money for school shoes. He was motivated to do the run after he discovered 90 children in his community had lost their parents to Covid-19.

“I know what it is to be young and burdened by poverty. I can’t take away the sadness of having lost your parents but I can take away the financial burden,” he says.

Since his 28km ‘appreciation run’ for frontline workers in July, he has been joined by civil society organisations, the metro’s university and the department of education. Read the full story here. DM/MC