The options for protesting refugees when Covid-19 shelters close: repatriation or local integration 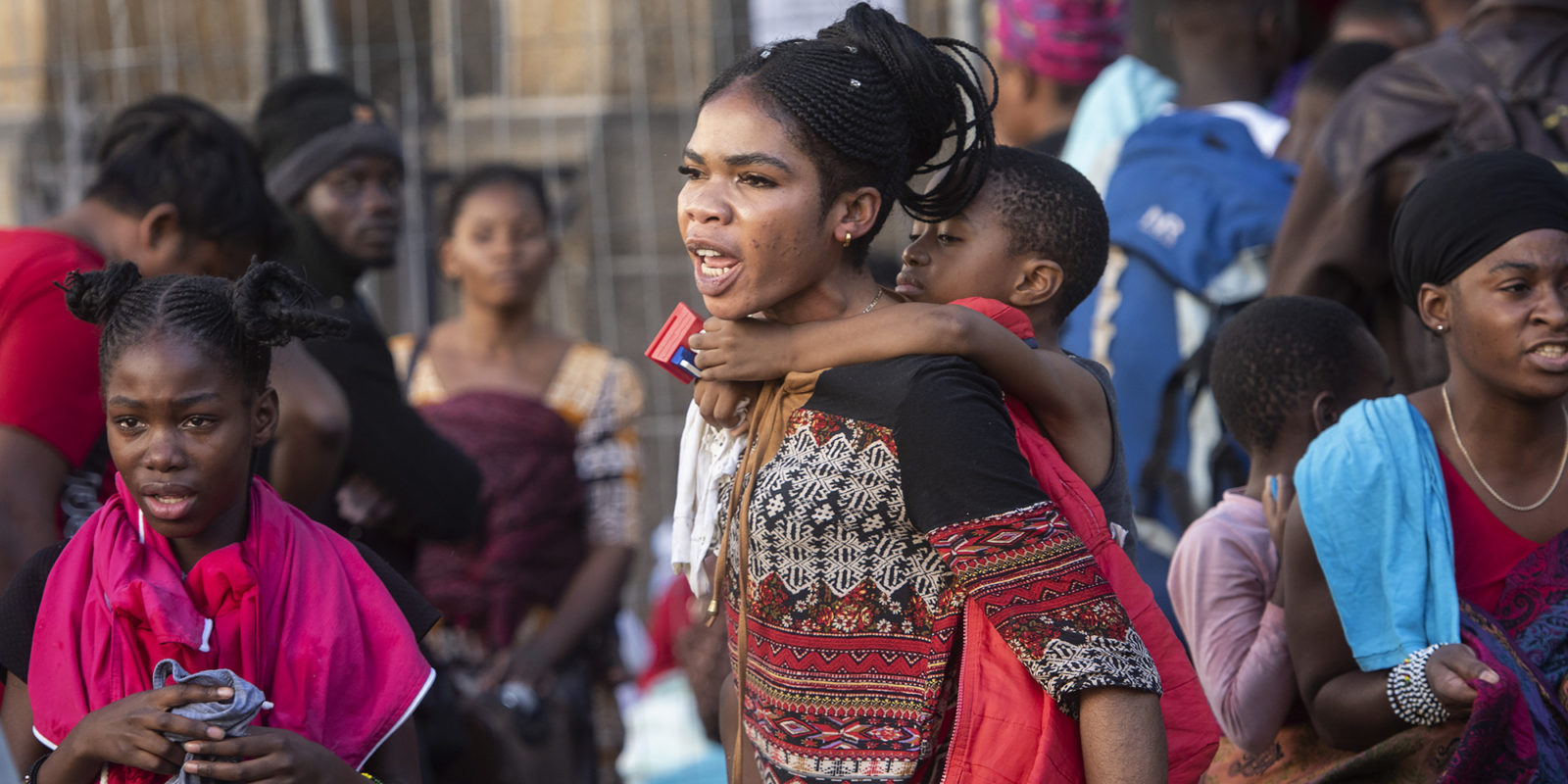 Refugees and asylum seekers who had been occupying the Central Methodist Church and surrounds on Greenmarket Square in Cape Town are now housed in two temporary shelters which are set to close once the Covid-19 regulations are lifted. (Photo: Gallo Images / Brenton Geach)

Protesting asylum seekers and refugees face repatriation or local integration once the temporary Covid-19 shelters they are housed in close down, reports to Parliament show. The crisis began in October 2019 in Cape Town with a sit-in protest outside the United Nations High Commissioner for Refugees offices in Waldorf Arcade.

It’s been nearly a year since a group of refugees and asylum seekers in Cape Town began protesting against xenophobia and pleading for group resettlement to another country. A Home Affairs Parliamentary Committee meeting held on 1 September was meant to table solutions to the ongoing crisis, but was postponed when the City of Cape Town, The South African Human Rights Commission (SAHRC), and the Department of Home Affairs either failed to submit reports timeously or didn’t submit reports at all.

Acting committee chairperson Mosa Chabane expressed his “disappointment” in a statement, saying it was “an important matter that should be treated with urgency”.

The refugees and asylum seekers are housed in two temporary shelters which are set to close once the Covid-19 regulations are set to be lifted on 15 October 2020. The meeting on the matter has been deferred to mid-October when Parliament resumes.

The deadline to submit outstanding reports was 9 September. According to documents subsequently submitted to Parliament and seen by Daily Maverick, the two solutions still on the table for the group are reintegration into local communities or voluntary repatriation to countries of origin.

The shelters are at the Wingfield Military Base and Paint City in Bellville. The group had split into two hostile factions while occupying the Central Methodist Church on Greenmarket Square and couldn’t be housed under one facility. One group had been sleeping inside the church building while the other was banished to the pavement. Both the Wingfield and Paint City sites were established after the Covid-19 Disaster Management regulations were implemented in late March. The refugees were moved in accordance with physical distancing protocols.

Things Fall Apart in the church of refugees

Numbers have increased at both sites, placing significant strain on resources, a report from the SAHRC read. Wingfield originally had around 400 people but now has at least 700. Paint City’s numbers have also increased from the initial tally of about 900 occupants.

Several issues at both sites were pinpointed which need to be rectified before the camps are decommissioned.

At Wingfield, water, electricity and showers were provided as well as security from City of Cape Town law enforcement and some PPE, but there are concerns over lax access control. Occupants were screened, but hygiene measures have not been consistently enforced. It is unclear which government entity oversees the Paint City camp, but protest leader Jean-Pierre Balous and his wife Aline Bukuru seem to manage it. Balous was arrested in early March after a courtroom scuffle with police. He was appearing at the Cape Town Magistrate’s Court for charges including assault with intent to do grievous bodily harm.

“Notwithstanding his imprisonment on intimidation charges, Balous continues to exert a strong influence over the site population. In effect, the control exerted by them in the Church has continued unabated. This has made any direct engagement with the site population very difficult. The Department of Health was even refused to do a health assessment of the site population,” the SAHRC report read.

Part of the plans to stabilise the camps include:

Documents submitted by the Department of Home Affairs say the Refugee Appeals Authority and the Standing Committee for Refugee Affairs (SCRA) will conduct hearings for refugee status applications that have been rejected. After the appeal process, those who are finally rejected will be deported unless they decide to take their matters on judicial review.

Home Affairs conducted a court-ordered verification exercise in February 2020 after the City of Cape Town was granted an interdict against refugees sleeping outside the church in breach of city by-laws.

Reports indicated that 11 families had already been helped with local integration. The group of 20 adults and 48 children were reported to have been given spaces to rent around the city.

The draft roadmap for integration would include:

The asylum-seeker system in South Africa does not ascribe to refugee camps.

Refugees have the option to return to their countries of origin, but this is dependent on whether it is safe to return. The principle of non-refoulement found in the 1951 refugee convention and its 1967 Protocol Relating to the Status of Refugees (to which South Africa is a signatory) protects legitimate refugees from being forced to return to their countries of origin if it puts them in danger.

At this point, however, South Africa’s borders remain closed. A draft roadmap for voluntary repatriation for the refugees once borders reopen includes:

There is no clear or proposed timeline for when either plan will be set in motion.

Despite their hostility towards each other, both refugee factions are still set on group resettlement. In its documents, the UN High Commissioner for Refugees explained that resettlement was for a “small number of refugees with acute protection needs”. Resettlement is determined on an individual basis and is usually the last option once all avenues have been exhausted. Resettlement is also contingent on potential host countries’ willingness to take in refugees. DM