Frustrated performing artists take to the streets to so... 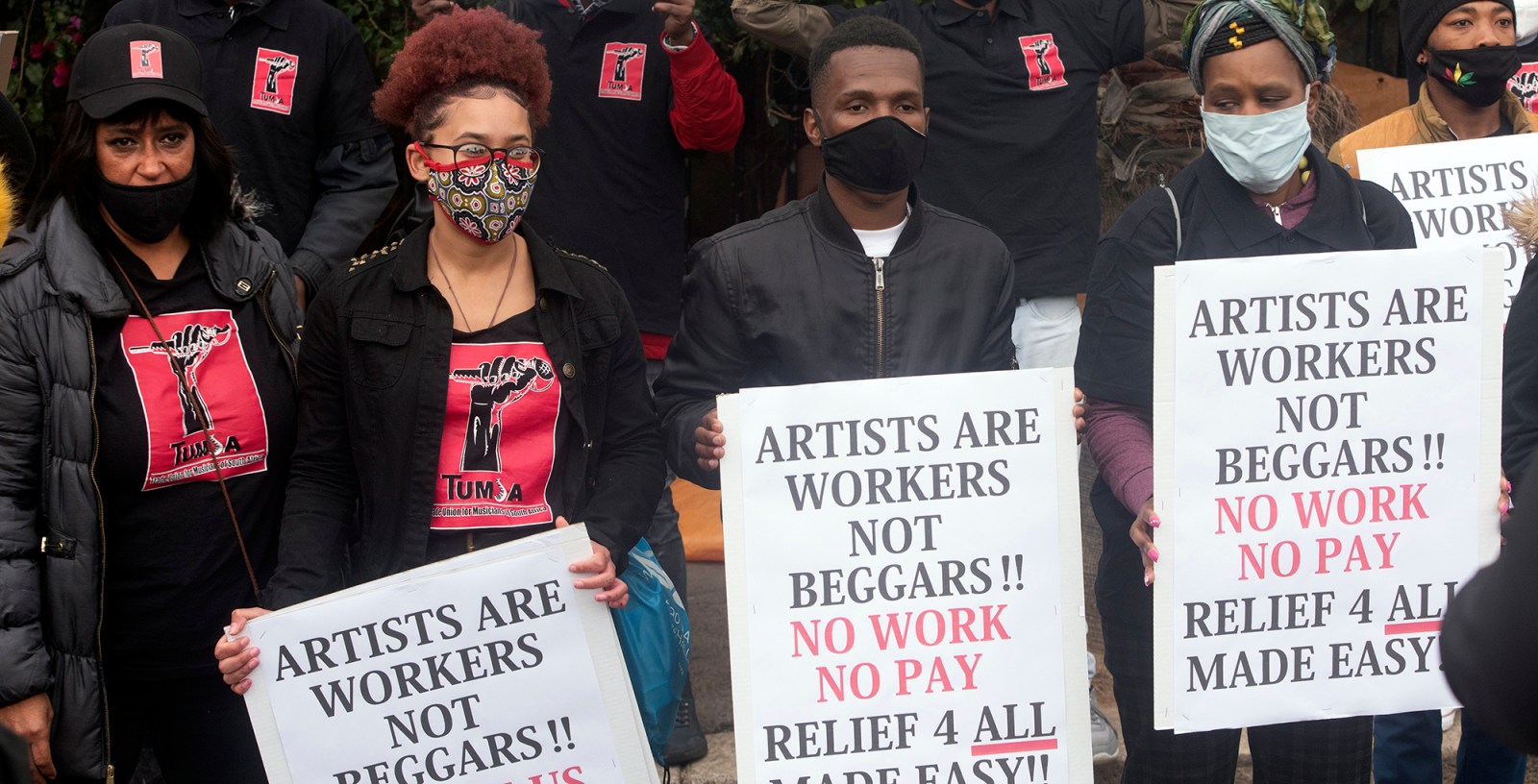 The arts and culture industries have suffered devastating losses since lockdown began. On Wednesday, artists from across the country marched to demand an easing of restrictions on audience sizes and improved criteria for relief funding. This was ahead of the Covid-19 address by President Cyril Ramaphosa in the evening.

On Wednesday morning, artists across the country marched to demand lighter restrictions on the arts and culture industry.

The industry has been battered since lockdown began, resulting in severe income losses, retrenchments and the closure of institutions and arts organisations.

One demand was for venues to allow audiences at 70% capacity, with protocols to minimise the spread of infection.

“The gyms are open, the tourism sector is open and basically we are the industry that is still closed,” said Romeo Ramuada, an organiser of the protest and the president of the SA Arts and Culture Youth Forum.

Under lockdown level two, theatres and bars were allowed to open with a maximum of 50 people (excluding staff) permitted in the venue at a time. Nightclubs remained closed and a 10pm curfew was in place.

Nineteen organisations under the banner of the Alliance of Cultural and Creative Industries Stakeholder National Organisation were responsible for the protest, which included marches to the Union Buildings in Pretoria, Parliament in Cape Town and demonstrations outside provincial premiers’ and municipal offices.

A group of about 50 artists and performers are protesting opposite Parliament and are calling for governmental relief. @GroundUp_News pic.twitter.com/6jS3cTT9ma

Frustration with the Covid-19 Relief Fund was raised in a memorandum of demands drafted by the alliance.

The Department of Sport, Arts and Culture allocated R150-million to the relief fund to aid artists, athletes, technical personnel and the core ecosystem of the sector. The first wave of payments was capped at R20,000. Ramuada, however, said the once-off payment was insufficient for close to seven months of lockdown.

In a statement on 15 September, the department said 4,772 applicants out of 5,786 had received funding. But Ramuada felt the application process was unfair to those in “remote areas”, who lacked access to data and the internet.

The memorandum highlighted further barriers, such as the requirement for tax compliance certificates and bank statements, which demonstrated a lack of understanding of the industry.

“A vast majority of practitioners earn a predominantly non-contractual, cash, hand-to-mouth remuneration for their work in a sector which is highly unregulated,” the memorandum read.

The department acknowledged that the process had been “marred with challenges” and has opened up a second wave of funding capped at R6,600. Those receiving government funding, including grants, are excluded, a clause which the alliance said was unfair.

One requirement for funding is that applicants must be between the ages of 36 and 59. Artists who were 70 or older qualified for the Living Legends Legacy Programme (LLLP), yet artists aged 60-69 were left without aid.

“Artists do not retire post-60, but because of their vulnerability in an unregulated industry, they have no retirement benefits,” the memorandum said.

Earlier in September members of the arts and culture industry protested in Durban and were met by violence. At least 30 people were arrested. A further demand by the alliance is that charges against the protesters be dropped.

Police have given artists 10 minutes to wrap their picket at Parliament @TeamNews24 pic.twitter.com/q9KiidN2fg

Playwright, theatre director and performer Tiisetso Mashifane wa Noni says the future of the theatre industry looks “shaky”. Before lockdown, audience sizes and access to funding were already inconsistent and now, “a lot of theatres are not producing shows”, putting the industry in a more precarious position.

In an effort to survive, some venues have sought creative ways to generate revenue. The Baxter Theatre in Cape Town, for example, launched a #BaxterCoffeeAngels initiative, where for a R30 monthly donation you could buy The Baxter a “cup of coffee”.

The Brooklyn Theatre in Pretoria began streaming performances on YouTube after being hit hard by the lockdown and was forced to leave its premises at Greenlyn Village Centre in Menlo Park.

But the “online” option isn’t open to everyone. Ramauda said there is an entire value chain excluded from earning an income online.

“There is somebody selling food, there’s someone selling drinks, performers, technical people. So we want the value chain to be covered. The cultural industry value chain has been disrupted and if it’s not rescued we are going to have an industry that has collapsed.” DM