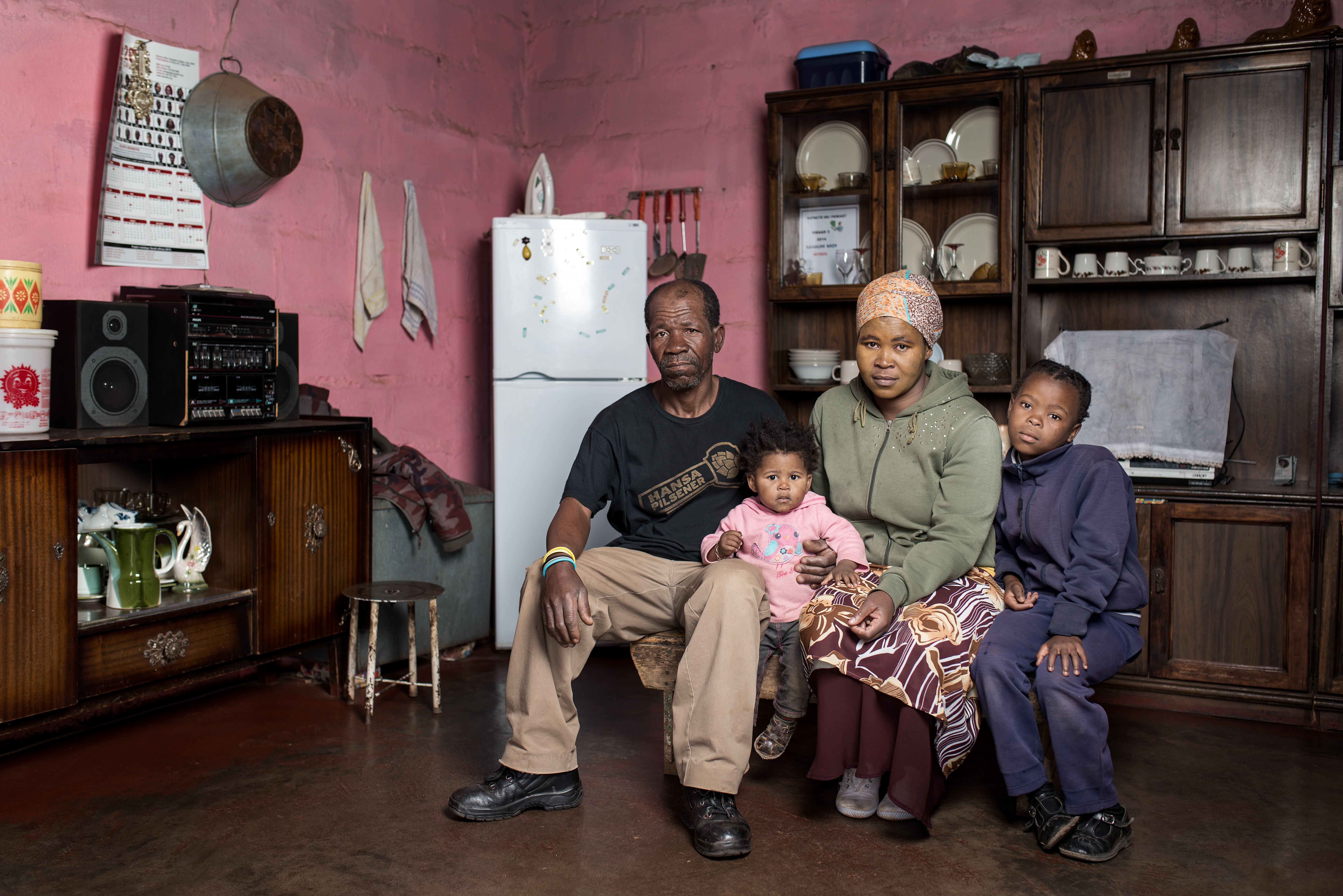 Zimoshile Bozo is 57 years old and lives in Hofmeyr in the Eastern Cape province. He worked on the mines for 27 years at Blyvooruitzicht Gold Mine and was diagnosed with silicosis in 2008. He didn't receive any compensation and now has to rely on his sister to care for him, as he is unable to find work. He lives with his sister and her children in a small three-room house in the township outside Hofmeyr.(Photo: Thom Pierce)

In a shocking admission to the Eastern Cape Legislature, MEC for Social Development Siphokazi Lusithi has admitted that no subsidies have been paid to large parts of the NPO sector (nonprofit organisations assisting the government with social services) up to July 2020. Many posts for social workers are now in danger as organisations rely on the department to subsidise these salaries. While some payments were made subsequent to her written response, organisations working in the most vulnerable sectors of the community still have not received anything.

IT problems, striking staff, an “inability to work remotely” and more IT problems have been blamed for the failure by the Eastern Cape Department of Social Development to pay any subsidies to organisations in the nonprofit sector performing vital government functions in looking after the vulnerable, working in the HIV/Aids sector and protecting children.

This is the third year that organisations have struggled to get their subsidies paid.

MEC Siphokazi Lusithi said in written answers to the Eastern Cape legislature in the 2018/2019 year the department had to replace its information technology system.

“The technology used by the department was outdated and it was not even supported by the market. It had to be enhanced and that contributed to the delays,” Lusithi said.

The department subsequently introduced a new system that did not work either.

The next year, according to Lusithi, payments were delayed by the new system.

“Despite good intentions, the unintended consequences were a negative impact on the speed of capturing information for processing payment,” she said. Some features of the new system “had to be suspended” into the present financial year.

The excuses she offered for the nonpayment of subsidies in the present financial year was that critical personnel had gone on strike for six months, and the national lockdown, imposed by the government to curb the spread of coronavirus infections in the country, had “prevented” the signature of service legal agreements.

Lusithi said there had been ad hoc closures of several offices “due to Covid-19” and further said that “officials critical in payment processing only had desktops and could not work remotely”.

She said glitches due to incorrectly captured information in the NPO payment system further contributed to delays as did budget cuts that led to the reconsidering of some allocations. She further admitted that there were “glitches” in registering newly funded NPOs.

Earlier in September, 20 social workers brought an urgent application before the Bhisho High Court after the department began deducting money from their salaries for not arriving at work.

They were part of a large group of employees at the Department of Social Development who were evacuated from their offices at Beacon Office Park in King William’s Town in February 2019 after the building was declared a health hazard due to a formaldehyde gas leak. A year later, the Department of Public Works had not secured permanent new premises.

All employees were authorised to work from home.

The 20 employees said in papers before the court that they were initially authorised to work from home until 15 August 2019. The Department of Social Development, however, told the court that on 15 May 2020 they withdrew the authorisation to work from home. Staff were requested to “report for duty” at three separate locations. The employees denied receiving this instruction.

On 18 May the department had “disconnected all their modes of communication.” The employees said that when they were told to work from home they were forced to use their private cellphones and data as it became impossible to access IT connections and other work tools at the social development offices. They had filed a formal grievance over this.

The Department of Social Development said in papers before the court that the employees had instead refused to report for duty until certain demands had been met.

They eventually reported for duty on 27 July 2020 at the departmental board room.

They were then served with a letter alleging “unauthorised absenteeism” since 24 January 2020 and told that the “no work, no pay” principle would apply.

The department began deducting R8,000 a month from their salaries each month. The court has stopped the deduction pending further litigation to review this decision.

Meanwhile, treasurer of Port Elizabeth Mental Health Gary Koekemoer said his organisation served the most vulnerable in society, who cannot pay, are continuously stigmatised and discriminated against, and for whom the government itself has very little of its own capacity in place.

“As a consequence, government funding of our work is a key component of providing services to vulnerable communities and thus critical to sustaining our services. Our situation is now dire; we are unable to pay staff salaries because the department is five months behind in payments and suffers ongoing problems in loading payments on to their system. This is compounded by delays in TERS (Temporary Employer-Employee Relief Scheme) funding, Department of Health funding and outstanding SETA funds.

“Our cash flow is simply unable to sustain such delays. And our ongoing and daily attempts to get the matter resolved bears no fruit. The State’s incapacity is being carried by our staff and the communities we service. It’s unconscionable,” said Koekemoer.

CEO of the Algoa Bay Council for the Aged Maureen Andreka said subsidies for their social worker posts had arrived only at the beginning of September.

“We went through a similar issue with DSD some three years ago which resulted in retrenchments of our staff and no additional capacity being provided to those vulnerable communities by the State. The necessary court case to challenge that, and which we are reluctantly part of, is only now going to be heard at the end of September.

“Mental health has been and is severely impacted by Covid-19 and the necessary containment measures. A caring society would increase mental health support during such times, not hamstring it. Quite simply, the state’s capacity has collapsed and there appears little hope of deeply systemic failures being resolved soon. We are very gravely concerned about the future of mental health support to the vulnerable communities of our city,” said Koekemoer.

CEO of the Algoa Bay Council for the Aged Maureen Andreka said subsidies for their social worker posts had arrived only at the beginning of September.

“However, we were told, as were some early childhood development centres, that they are retracting our service level agreements and allocation letters for our service centres due to departmental budget cuts.

“We have signed contracts and they now claim that the Disaster Management Act allows them to withdraw these contracts and issue us with new ones with new payment arrangements. I have not yet received a new one, but I did get a call from someone in a rural area who was given a new contract to sign,” said Andreka.

“The department is of the belief that lockdown kept the older persons at home so we could not serve them; therefore we could not provide a service. However, our centre members live within our housing schemes and we kept up with providing them with a midday meal as we were not initially told they would not fund us until about July.

“All they want to pay any of the centres is a carer stipend of some R2,244. The usual subsidy of R200 per person per month is broken down into amounts for food, admin, health. Fact is, if even some centres did not operate (one of ours we could not serve) rentals, phones and other admin costs were ongoing,” said Andreka.

Ritter said social workers had worked since April, right through the lockdown, without salaries to deal with cases of neglected and abandoned children.

“Some centres tried to carry on with overdrafts etc expecting to get subsidies. They have now had to close with debt. Seringa Service Centre in PE is one of these. Out of 248 registered members, we were able to reach 198. That is R198,000 due to us for five months of operation that they are refusing to pay. I have sent email letters to our district office, to the HOD and no one replies to our queries,” said Andreka.

Mervyn Rossouw, who ran one of the programmes to feed the elderly, said they would now have to look for private-sector funding to continue their work.

Dalene Ritter from Child Welfare in the Eastern Cape said they asked for national intervention in the crisis as she feared that the “writing is on the wall” for NPOs in the province.

“This is the fifth year that we are having problems with payment.”

Ritter said social workers had worked since April, right through the lockdown, without salaries to deal with cases of neglected and abandoned children.

“I know of three Child Welfare branches in the Eastern Cape that could pay their staff because they took money from investments. None of the others got money. We had to borrow R20,000 in Humansdorp to keep the organisation going,” said Ritter.

“Our personnel have to drive or take taxis to get to work. They don’t have money to afford travelling.

“We only recently received subsidies for the past six months, but none of our running costs or pension fund contributions are being covered. If I can use Humansdorp as an example, we owe R8,000 for petrol, we must pay our security provider and we must pay our insurance. Many other organisations are in the same boat,” said Ritter.

“People want to leave, but there is no money for retrenchments. We are heartbroken. The Eastern Cape government has milked this cow until there is nothing left to give.

“They are not even bothering with writing letters to us any more, they now just send a WhatsApp message,” said Ritter.

The Eastern Cape Department of Social Development did not respond to a request for further comment. DM/MC