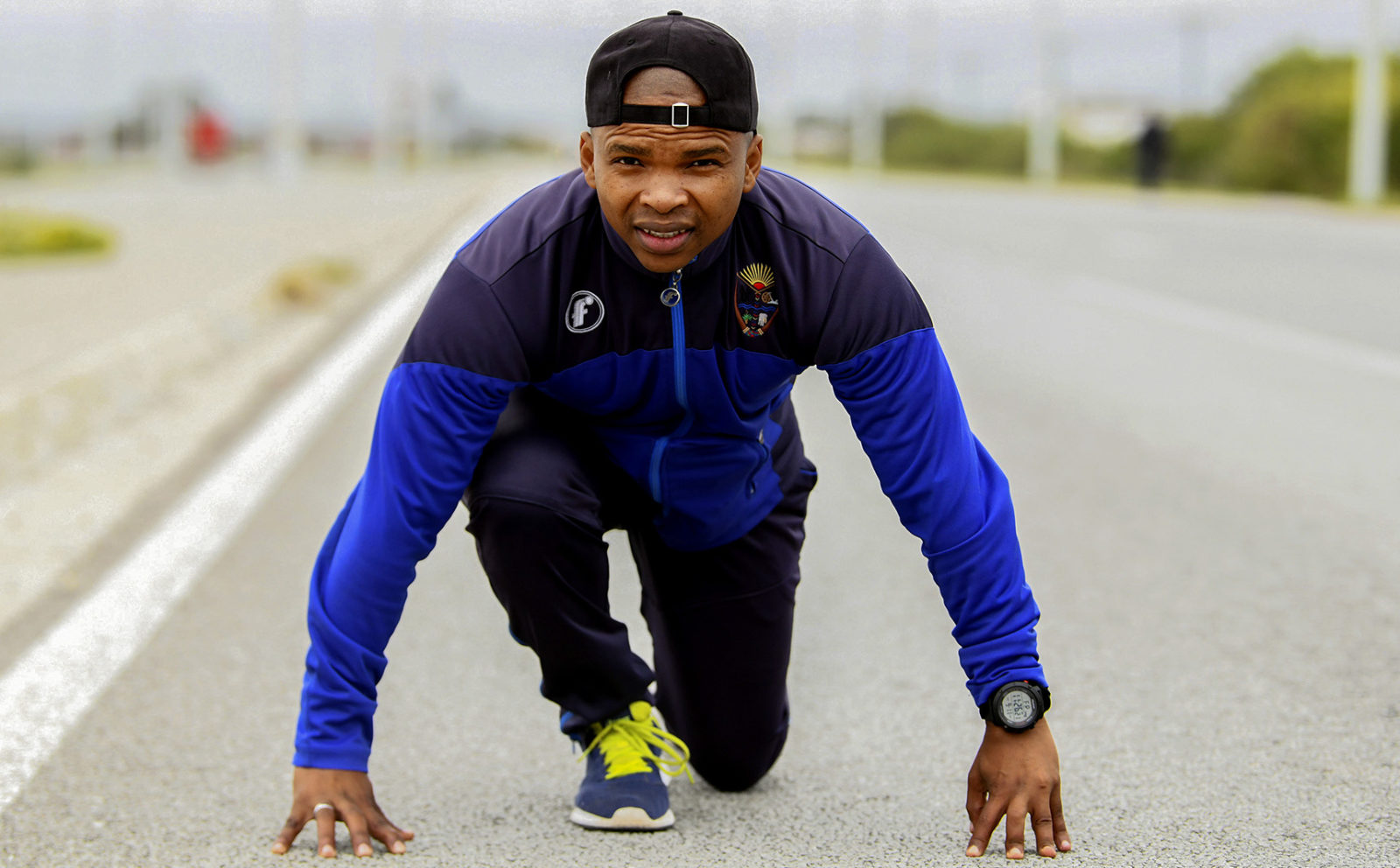 Godfrey Jacobs gets set to train for his run to benefit children who lost their parents to Covid-19. (Photo: Theo Jephta)

After watching friends lose their parents during the Covid-19 pandemic and seeing his community reeling as many families lost their breadwinners, Godfrey Jacobs decided to help by buying school shoes for children who lost their parents – even when that meant he had to spend lockdown running around his own house. Now he’s set to run from Uitenhage to Port Elizabeth in October.

Having been involved in the Colchester community since the age of 19, Godfrey Jacobs was devastated to see the pain and loss that Covid-19 caused in both his own and the broader communities in Nelson Mandela Bay.

“You ask around and you suddenly realise that 90 children in one community lost their parents. I started thinking, what is going to happen when the new school year opens? Who is going to buy them shoes?

“I watch what is happening in my own community and I can see the outbreak is letting up. People are getting ready for a big party in December and then they forget that a new school year will start in January,” he said.

“I know what it is to be young and burdened by poverty. I can’t take away the sadness of having lost your parents but I can take away the financial burden.”

He said he is first looking for donations of school shoes, but depending on the response will also try to get enough uniforms and stationery.

Jacobs, who works for the Nelson Mandela Bay Municipality and is a member of the municipality’s running club, said he always had a passion for running.

“Because of the outbreak of Covid-19 I had missed out on running the Two Oceans Marathon. But it made me think what can I do, even if I can only make a small difference?”

Jacobs kept on training, first running around his house during hard lockdown and then returning to training on the road.

He said he’s working with the Department of Education to get lists of schools in need.

He plans to start his run to get school shoes on 2 October 2020 from Uitenhage to the City Hall in Port Elizabeth.

“I did a 28km run in July, from the Spar in Colchester to the Spar in Bluewater Bay,” he said. I called it my ‘appreciation run’ to create awareness and show gratitude for all frontline workers.”

He said his plans have so far gone over well in the Nelson Mandela Bay community and he has already received 11 pairs of shoes.

Jacobs is collaborating with Professor Jean Greyling of Nelson Mandela University. “We have identified 20 households that were badly affected by Covid-19 and we would like to provide them with toiletries and groceries as well,” he said.

Jacobs said he always had a heart for children. “At 19 I adopted my aunt’s child when her mom died. Since then we also adopted another girl. I look after them and my grandmother. It is part of the DNA.”

Prof Greyling said he met Jacobs 15 years ago when he worked in his wife, Louise’s, factory.

“I have always kept up with what he was doing and I have always been impressed with his efforts to improve living conditions for his community. I became very interested in his project to raise donations of school shoes as I myself know how the emergency lockdown had impacted on many people,” he said. “I think many people are hungry to make a difference after this incredibly difficult year.”

Greyling said one of his former students has sponsored 38 pairs of shoes, and promised to pay for another pair for each kilometre he walks with Jacobs. “I am going to try for 10 km,” he said.

Greyling, who developed the BOATS game to teach children how to code and make them aware of marine pollution, said they have also made Jacobs’ project the beneficiary of their next virtual BOATS tournament.

Jacobs said because he was not part of a legal entity he partnered with the Ubutyebi Trust, a public benefit organisation that uses microfinance to facilitate access to housing for low-income households in Nelson Mandela Bay.

Projects coordinator for the run, Sibongiseni Kula, said the Covid-19 pandemic has without a doubt left many communities and homes vulnerable due to the deaths of loved ones.

“We are aware of reports where children have lost both their parents. We will be identifying these homes,” she said.

She said Jacobs was a passionate young man who took pride in helping others in need. “He has put together many projects in Colchester and the surrounding areas focusing on youth development and community-based care,” she said. DM/MC

I am woman, hear me whisper

Teachers with comorbidities told to return to school