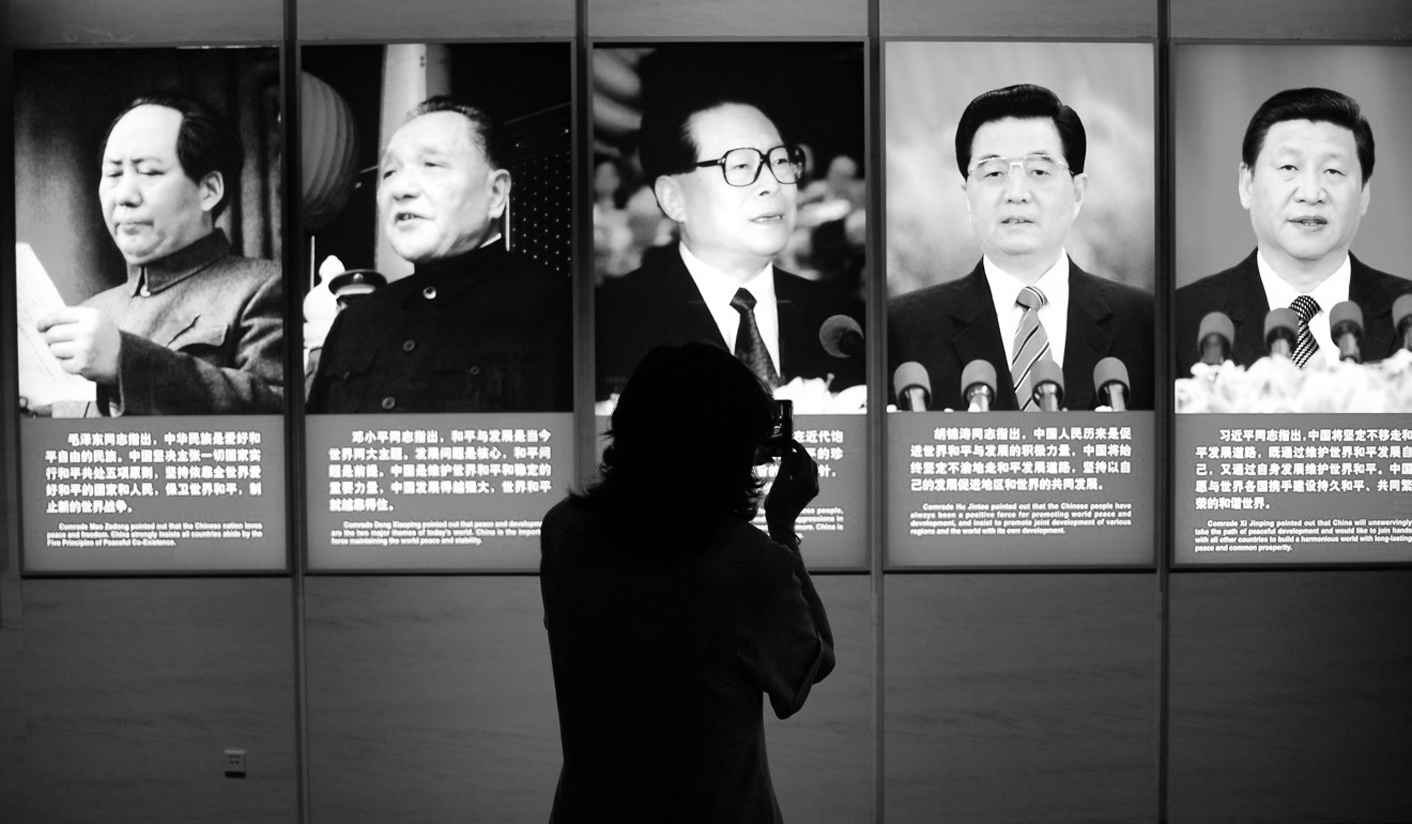 This is the 14th story in the series, Declassified: Apartheid Profits. While researching the recently published book Apartheid Guns and Money: A Tale of Profit, Open Secrets collected approximately 40,000 archival documents from 25 archives in seven countries. This treasure trove contains damning details of the individuals and corporations that propped up apartheid and profited in return. Many of these documents were kept secret until now. OPEN SECRETS believes that it is vital to allow the public to scrutinise the primary evidence. In this article we reveal documents that confirm an uncomfortable truth about the People’s Republic of China’s support for the apartheid government.

A “special concert” held at Pretoria’s State Theatre in March 2015 launched the “Year of China in South Africa”. The pomp and ceremony confirmed South Africa’s place as China’s “Strategic Comprehensive Partner”. In turn, the governing African National Congress (ANC) praised China as “a guiding lodestar of our own struggle”. These deepening political and economic relationships draw on an official history that tells of China’s support for the struggle against apartheid.

The truth, as recently revealed in Apartheid Guns and Money, is much more complex, and potentially embarrassing for both parties. The evidence is drawn from recently declassified South African military intelligence documents. If these had remained hidden, we would remain blissfully ignorant of the sustained and sinister support for the apartheid regime by communist China.

Despite being an ally to the liberation movements and a permanent member of the UN Security Council, China was in fact supplying the apartheid military with guns and bombs from at least 1980. Indeed, as the documents show, it was the mounting pressure on Western countries to cut all ties with apartheid South Africa that seems to have pushed China into a closer alliance with Pretoria.

According to official accounts, there were no diplomatic or trade relations between the People’s Republic of China (PRC) and apartheid South Africa. The public face of this relationship was one of mutual contempt and disdain. Pretoria professed to be staunchly anti-communist, a bulwark against Soviet expansion in Africa. To underscore this alignment, the apartheid government recognised the legitimacy of Taiwan, China’s arch enemy, over mainland China’s.

In return, from the 1950s, China backed the liberation forces fighting to overturn the apartheid state. During the Sino-Soviet conflict of the 1960s and ‘70s, it supported the Pan Africanist Congress (PAC) over the Russian-backed ANC. However, following Oliver Tambo’s visit to China in 1975 and a follow-up meeting in Lusaka in 1982, the relationship between the ANC and Beijing seemed back on track.

Like many countries profiled in this series, the People’s Republic proved to be at ease playing both sides. In an interview, apartheid spy Craig Williamson revealed that he was among a group of National Party (NP) politicians who welcomed a Chinese delegation on a covert visit to South Africa in 1988. Declassified documents confirm this and in the same year, the Minister of Trade and Industry, Danie Steyn, who ran a sanctions-busting unit called Unconventional Trade, sent a “top secret” letter to PW Botha. In it, he confirmed the visit and positive developments in trade relations between Beijing and Pretoria. During this “unofficial” visit, South Africa and China shared technology and forged trade deals. These included deals for power station cooling technology, communications systems for mining, minerals, maize and even brandy and fruit juice.

This 1988 visit was not the first step to opening up the relationship as the Cold War waned. Rather it was the culmination of a decade-long clandestine relationship. It wasn’t only brandy and fruit juice that the apartheid regime was trading with China. The South Africans were also in the market for guns and bombs.

It appears that this trade had started by the early 1980s and was obscured by the use of a codename for the People’s Republic, probably drawn from the popular local beer brand, Hansa. This illegal arms trade was facilitated directly by the South African military, with the help of Military Intelligence, and an Armscor front company.

In this case, the weapons were sent from China’s state-owned arms company, the military industrial behemoth Norinco, to the South Africans. From there it was distributed with the complicity of the Chinese state to Pretoria’s allies: Unita in Angola and Renamo in Mozambique. The list of weapons paints a morbid picture and in one recorded deal included rocket launchers, AK47s, 20,000 rounds of ammunition, and 200 bombs weighing 250kg each.

To hide the trade from prying eyes, and to allow both parties to keep a discreet distance, a middleman was needed. They found a mutual friend in Mobutu Sese Seko’s Zaire (now the Democratic Republic of Congo, DRC). Mobutu a renowned kleptocrat, was an ally of Unita’s Jonas Savimbi’s, close to Washington and Paris and enjoyed a good relationship with Pretoria’s military intelligence.

A classified Foreign Affairs memo dated 2 March 1983 details how the conduit was set up. Zaire, with Mobutu’s sign-off and for a fee, provided the end user certificates fraudulently identifying Zaire as the final destination for the weapons. In order to complete the ruse, an Armscor front company registered in Geneva, named Adam Export, was used to obscure South African involvement. Zaire agreed to allow two South Africans, through Adam Export, to act on Zaire’s behalf in contracting with Norinco.

Obscuring the nature of the contract was one thing, but ensuring the actual shipment was another challenge. During one such shipment in 1985, dubbed Operation Kauka, the cover was almost blown. The plan was to ship 282,000kg of Chinese weapons, valued at around $5-million, from Shanghai to Durban via the Zairean port of Matadi – this would become a well-worn sanctions busting route. The cargo would be transported by a Danish-registered ship, the Vinderslevholm.

The original plan was to label the goods being re-exported from Matadi as coffee destined for Maputo in Mozambique. However, due to logistical issues in Zaire, this plan became untenable and another had to be hatched on the fly. In May 1985, with the Vinderslevholm due to arrive in Matadi any day, it was decided that the guns and bombs – on paper at least – would become bicycles, cooking sets and ploughs. This “agricultural shipment” would be attributed to a Pretoria-based front company, Rust Enterprises.

Even with this new plan, as the ship docked in Matadi on 10 May 1985, the cover was nearly blown. The whole operation was put at risk when a Russian ship unexpectedly docked 20 metres from the Vinderslevholm. The Russian crew were none the wiser, but they were within spitting distance of the illicit cargo which, if uncovered, could have blown the whistle and exposed the entire operation. Despite these close shaves, the cargo made it to Durban and in all likelihood into the hands of Unita and Renamo fighters.

In the second half of the 1980s, secret trade between Red China and apartheid blossomed; it was a “strategic comprehensive partnership” of a special type.

Perhaps the high point of this “friendship” came with the co-operation on development of nuclear weapons in the late 1980s. At this time, London’s Sunday Times reported that the two countries had signed a secret treaty which gave Pretoria access to Peking’s long-range missile technology to assist in the development of their own nuclear arsenal. As we saw in Declassified: Apartheid Profits – American Guns, the SADF had in turn covertly provided the Chinese with sophisticated US missile technology for several years.

China is today a global superpower dependant on Africa’s natural resources. It has nurtured a narrative of a glorious past – a long-time supporter of the liberation movements and independence in Africa. However, there were deep levels of duplicity in this relationship which is not dissimilar with that of any of the great powers. Many, many ordinary people died and suffered as a result. These experiences from the past underscore the need for human rights to be central to South Africa’s foreign policy. Our democratic Constitution demands that we accept nothing less. Where these aspirations are corrupted, relations are subverted to enrich the powerful and well connected in capitals such as Pretoria and Beijing. DM