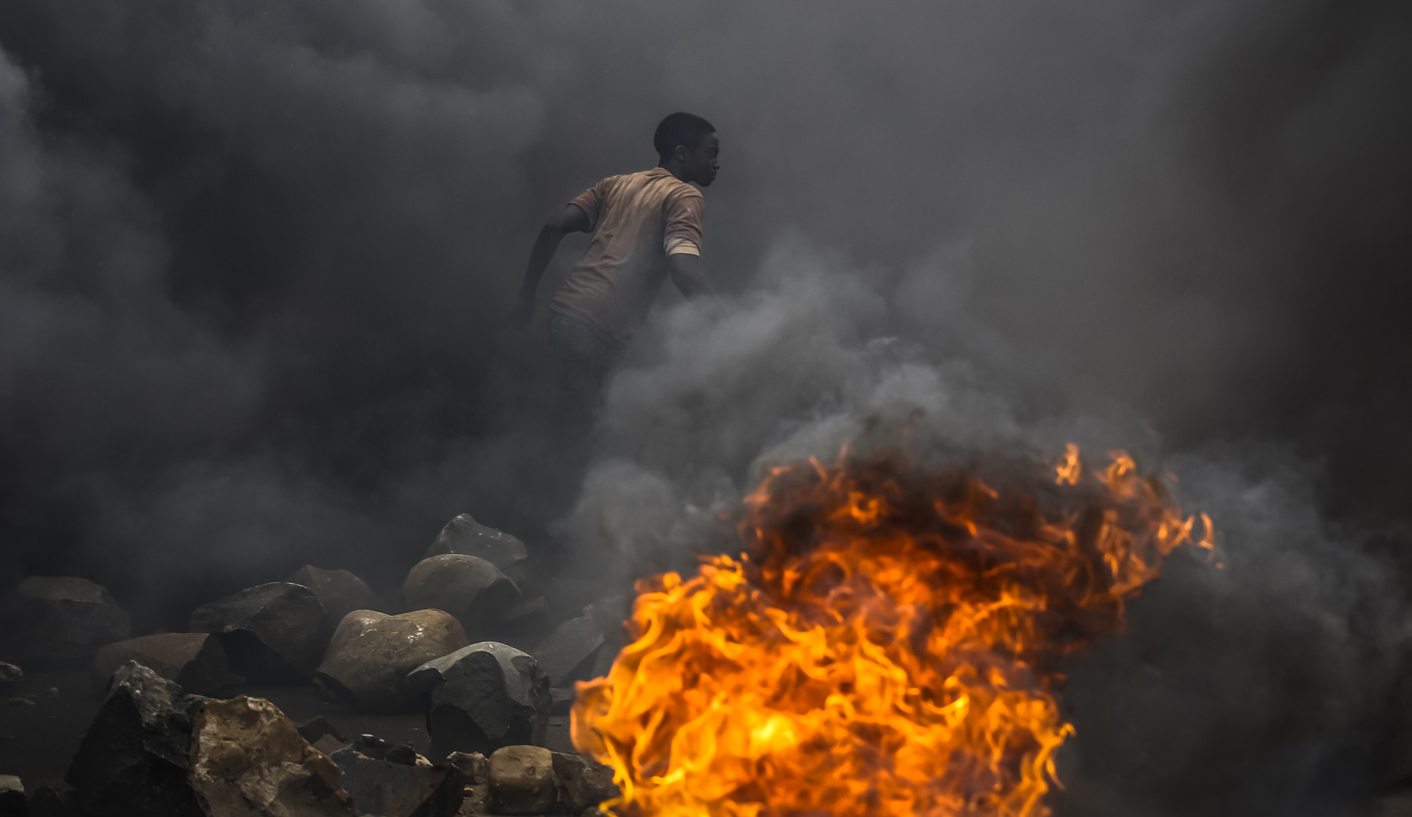 Despite all the progress – and there is a lot of that – there are still plenty of bad African news stories. SIMON ALLISON looks at what has gone wrong in 2015.

We tried to be optimistic about South Sudan, we really did, especially when the “historic” peace deal was signed in Addis Ababa in August. “While sceptics are right to wonder if this is anything more than a PR stunt, the truth is that peace doesn’t come easy – and this is as good a place to start as any,” the Daily Maverick wrote at the time. On the ground, however, nothing changed. The government and the rebels remain locked in a mutually destructive death choke, neither strong enough to win decisively. The humanitarian crisis gets worse by the day as civilians are caught in the crossfire – literally, at times. The human rights violations reported by international bodies are shocking in their extreme cruelty, and we can be sure that these are only the tip of the iceberg. In 2011, South Sudan’s long-suffering population thought that independence would finally bring with it a semblance of peace and stability. They were wrong, and their plight shows no sign of improving anytime soon.

Burundi was, until this year, a success story. A nasty civil war was brought to a close in 2005, in no small part thanks to an energetic African Union mediation team (led by then-South African Deputy President, Jacob Zuma, in what is still his finest foreign policy moment). A decade later, the country was well on the way to getting back on its feet, with regular elections and a small but busy economy.

Then President Pierre Nkurunziza decided that he quite liked life in the presidential palace, even though his constitutionally-mandated two terms in office expired this year. On a technicality, he forced his way into a third term, over the protests of civil society, opposition parties and even the African Union. Unsurprisingly, this decision reignited Burundi’s fault-lines. Since Nkurunziza’s re-election in July, several small armed groups have emerged to challenge his rule by force, and the government has brutally cracked down on any opposition. Hundreds have died, hundreds have been imprisoned, and hundreds of thousands have been forced to flee to safety inn neighbouring countries. A return to civil war now looks more likely than not.

At the same time, Nkurunziza looks to have inspired his colleagues in the region to follow suit. The Republic of Congo’s Denis Sassou-Nguesso held a referendum to eliminate term limits from his constitution; Rwanda’s Paul Kagame is doing the same; and the Democratic Republic of Congo’s Joseph Kabila is thought to be planning to delay new elections indefinitely, allowing him to stay in power too. This is not a recipe for stability in any of these countries.

It has been an exceptionally bad year for the African Union Mission in Somalia (AMISOM), the AU’s flagship peacekeeping initiative. On at least two occasions, AMISOM bases have been overrun by Al Shabaab fighters – humiliating defeats that we think cost dozens of lives (we are not exactly sure because AMISOM refuses to release accurate casualty counts).

The mission has also been accused of deliberately targeting civilians, most notably a wedding party in the town of Marka. Even if not true, these allegations have caused considerable damage to AMISOM’s credibility. Increasingly, they are being seen as belligerents rather than peacemakers. Then, in November, a scathing report was released by Nairobi-based Journalists for Justice, looking into the Kenyan contingent’s illegal smuggling of charcoal and sugar through Kismayo Port. Its conclusions were staggering: in effect, Kenya’s military intervention in Somalia is a little more than state-sponsored organised crime Even worse, the smuggling is done in collusion with Al Shabaab – in other words, the Kenyan military is helping its enemy to raise funds. This money doubtless goes into the planning of terrorist attacks against Kenyan civilians on Kenyan soil, like the Garissa University attack in April. As Somalia prepares for presidential elections next year, the AU urgently needs to ask itself a question: Is AMISOM doing more harm than good? And what can be done to fix it?

Before he died, most of us had never heard of Cecil the Lion. But from the moment Walter Palmer, an American dentist with an unfortunate penchant for blood sports, put first an arrow and then a bullet through Cecil’s head, this became the biggest African news story of 2015. For journalists trying to raise interest in wars and famine in places like Mali, South Sudan and Burundi, the attention that Cecil received was baffling – and said a lot about how Africa is perceived by the rest of the world.

With its proud, famous lion, the story echoed the Lion King and Madagascar, films which continue to define, and infantilise the continent. With its all-white cast – the white hunter, the white guide, the white conservationist who raised the alarm – the story reinforced old colonial tropes. Yet again, Africa was mediated through the actions and voices of white people, with black Africans relegated to the supporting cast. The only black person who did get a starring role in this drama was Zimbabwean President Robert Mugabe, depicted as the mad, bad dictator – another classic, damaging stereotype.

Yes, Cecil the Lion’s death was a tragedy. Yes, we need to conserve Africa’s wildlife. But that the death of one African animal is still considered more interesting than the lives of countless African people is a blunt reminder that this continent is still far from being understood on its own terms.

Let us get one thing clear. Overwhelmingly, African countries do not want to be reliant on aid. They know as well as anyone that aid is not a sustainable foundation for development. Donor countries are simply too capricious, too short-term in their thinking, and too reliant on the whims of unpredictable electorates for this to be true. That is why at the United Nations Financing for Development conference, in Addis Ababa in July, they came up with another solution, which went something like this: Instead of giving us hand-outs, why don’t we work together to stop tax evasion and avoidance, so that we collect the revenue that we are owed anyway? The extra tax collected would be worth more than aid, according to economists, and far more reliable.

The developed world was having none of this. The USA and the UK shut down all discussion of serious tax reform, choosing to protect the profits of the multinationals who fund their election campaigns rather than the future of developing countries. Moreover, aid is a useful weapon, used to maintain the participation of developing countries in a global system that overwhelmingly rewards rich nations over poor.

Like it or not, therefore, too many African countries will remain dependant on foreign handouts, a status quo that makes it very difficult to foresee genuine economic independence anytime soon.

While everyone was obsessing over Cecil the Lion, this is the kind of thing they were ignoring: In Angola in April, hundreds of peaceful worshippers were slaughtered in cold blood as the army attacked a church camp on Mount Sumi. This particular sect was growing too powerful for Angola’s rulers to countenance, and they paid the ultimate price for their presumed defiance. The state also targeted 17 political activists at their regular book club in Luanda in June. Their crime? Reading Gene Sharp’s seminal 1993 text, From Dictatorship to Democracy: A Conceptual Framework for Liberation. In modern Angola, this earned them immediate arrest and a charge of treason. The high-profile trial has been marked by absurdities, as journalist Rafael Marques has chronicled so brilliantly, such as the prosecutor napping while evidence is presented. Neither the Mount Sumi massacre nor the show trial should not come as a surprise. The regime of Jose Eduardo dos Santos is coming under pressure from a troubled economy and a vigorous political opposition, and is protecting itself in the only way it knows how: by violently cracking down on dissent wherever it sees it, or imagines it. DM

Photo: A Burundian protester runs through smoke raising from a burning barricade during an anti-government demonstration in the capital Bujumbura, Burundi, 22 May 2015. EPA/DAI KUROKAWA