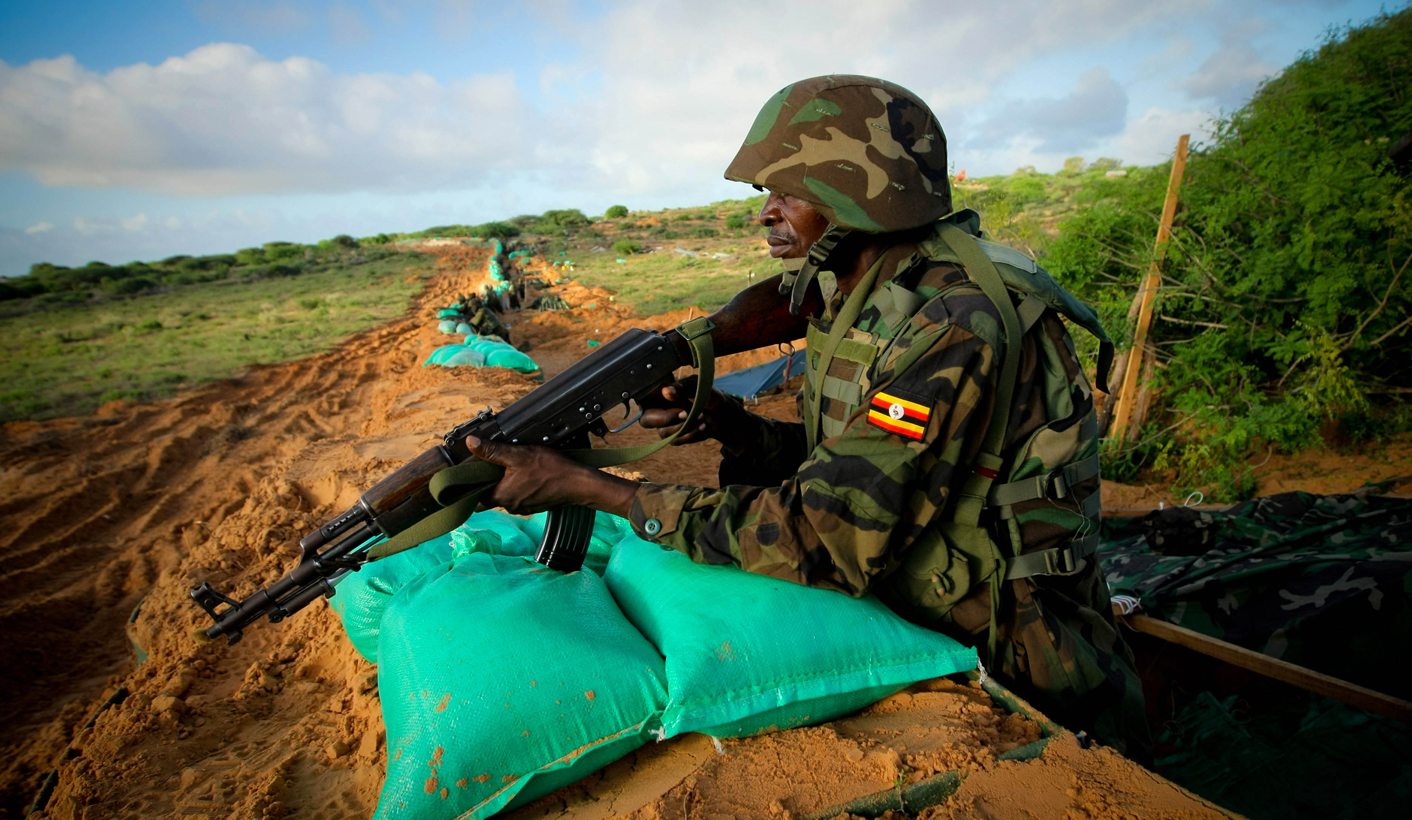 The African Union Mission in Somalia suffered another devastating setback this week as Al-Shabaab stormed a military base, killing dozens of peacekeepers in the process. The incident was yet more proof that there’s still plenty of bite to Al-Shabaab’s bark. It also raised difficult questions for the African intervention force, which is struggling to adapt to the militants’ changing tactics. By SIMON ALLISON.

On Tuesday, exactly a year after leader Ahmed Abdi Godane was killed by a ferocious American drone assault, Al-Shabaab got its revenge. The Somali Islamist militant group, on the back foot but clearly still lethal, launched a full-frontal attack on an African Union Mission in Somalia (Amisom) military base, leaving a trail of dead in their wake. The base, in the Janaale district of the Lower Shabelle region, is less than 100 kilometres away from where Godane’s body was found.

According to Amisom, this is what happened: “The Amisom base at Janaale, Lower Shabelle region in Somalia came under attack from Al-Shabaab militants today. The militants used a car loaded with explosives to trigger the attack and to facilitate their forced entry into the camp after which they engaged our soldiers in a gun battle. Although our troops undertook a tactical withdrawal following the initial vehicle borne explosive attack, they have since consolidated and regained full control of the base.”

Although Al-Shabaab claimed to have killed more than 50 soldiers, Amisom have yet to confirm the death toll. We know it’s serious, however, given the unusually swift response from senior officials, including African Union chairperson Nkosazana Dlamini-Zuma, who immediately issued a statement condemning the attack in “the strongest terms”. As the base was operated by Amisom’s Ugandan contingent, it’s likely that all the dead are Ugandan soldiers. (An AFP report, based on leaked Western diplomatic correspondence, claims that 50 soldiers are dead and another 50 are missing. This has yet to be confirmed.)

For Al-Shabaab, the attack wasn’t just about Godane, although the date was no coincidence. It was also about more recent events, specifically the alleged massacre of a wedding party by Ugandan troops in the town of Merka in late July. “This blessed raid comes as a revenge for the massacre of innocent Muslims in Merka perpetrated by the Ugandan crusaders, where they brutally killed 40 Muslims, including six members of the same family who were killed during a wedding celebration … (Al-Shabaab) vows to safeguard the lives of Muslims, defend their honour and protect them against the aggressive crusader onslaught spearheaded by the Ugandan crusaders.”

Amisom is investigating the claims, and has suspended the officer in charge in Marka. While Al-Shabaab’s alleged death toll is likely exaggerated, the claims are extremely damaging nonetheless.

After all, this is not the first time Amisom has been accused of mistreating civilians (look at this report by Human Rights Watch on sexual exploitation and abuse by Amisom troops in Somalia).

Every accusation is potent propaganda for Al-Shabaab – especially if it turns out to be true. The Al-Shabaab attack on the Janaale base comes just two months after another attack on an Amisom base. The two incidents are eerily similar, indicating that Al-Shabaab has developed a new and devastatingly effective modus operandi. According to the PSC Report: “On Friday 26 June 2015, Amisom suffered one of its greatest setbacks yet. In the town of Lego, Al-Shabaab attacked an Amisom military base that was supposed to be well fortified and well defended by a contingent of Burundian troops. It was not. Al-Shabaab militants killed dozens of soldiers (the exact body count is still disputed, but reports suggest more than 50 were killed), taking full control of the base in the process (Amisom control was restored shortly afterwards). Beyond the tragic loss of life, the attack was devastating because it showed that Al-Shabaab is far from the weakened force it was supposed to be by now.”

The Janaale attack adds to the impression that Al-Shabaab is enjoying something of a resurgence – and that Amisom is struggling to adapt to the group’s hit-and-run tactics. Pushing Al-Shabaab out of key towns and strongholds may have been the easy part, with the Islamist group fleeing before Amisom’s superior training and firepower. But in an asymmetric war, Al-Shabaab’s long experience of guerrilla warfare and its vastly better knowledge of local conditions and terrain make it a formidable foe.

All this leaves Amisom with several difficult questions.

The first is how to maintain morale amongst troops, who now know that even military bases are not necessarily enough protection.

The second is how to maintain the trust of the population that Amisom is supposed to protect: if even its bases are not safe, then what about airports and government buildings and public spaces that are much less secure? It means that when Al-Shabaab issues its threats against beaches and nightclubs and hotels, Somalis are much more likely to take them seriously.

Finally, but most importantly, Amisom and the African Union must ask themselves whether the mission, as it is currently constructed, has the necessary tools, funding and personnel to execute the next phase of the fight against Al-Shabaab. The militants have changed their tactics; can Amisom respond accordingly? DM

Photo: A Ugandan soldier serving with the African Union Mission in Somalia (AMISOM) mans the frontline in Maslah Town, on the northern city limit of Mogadishu. (Amisom photo)