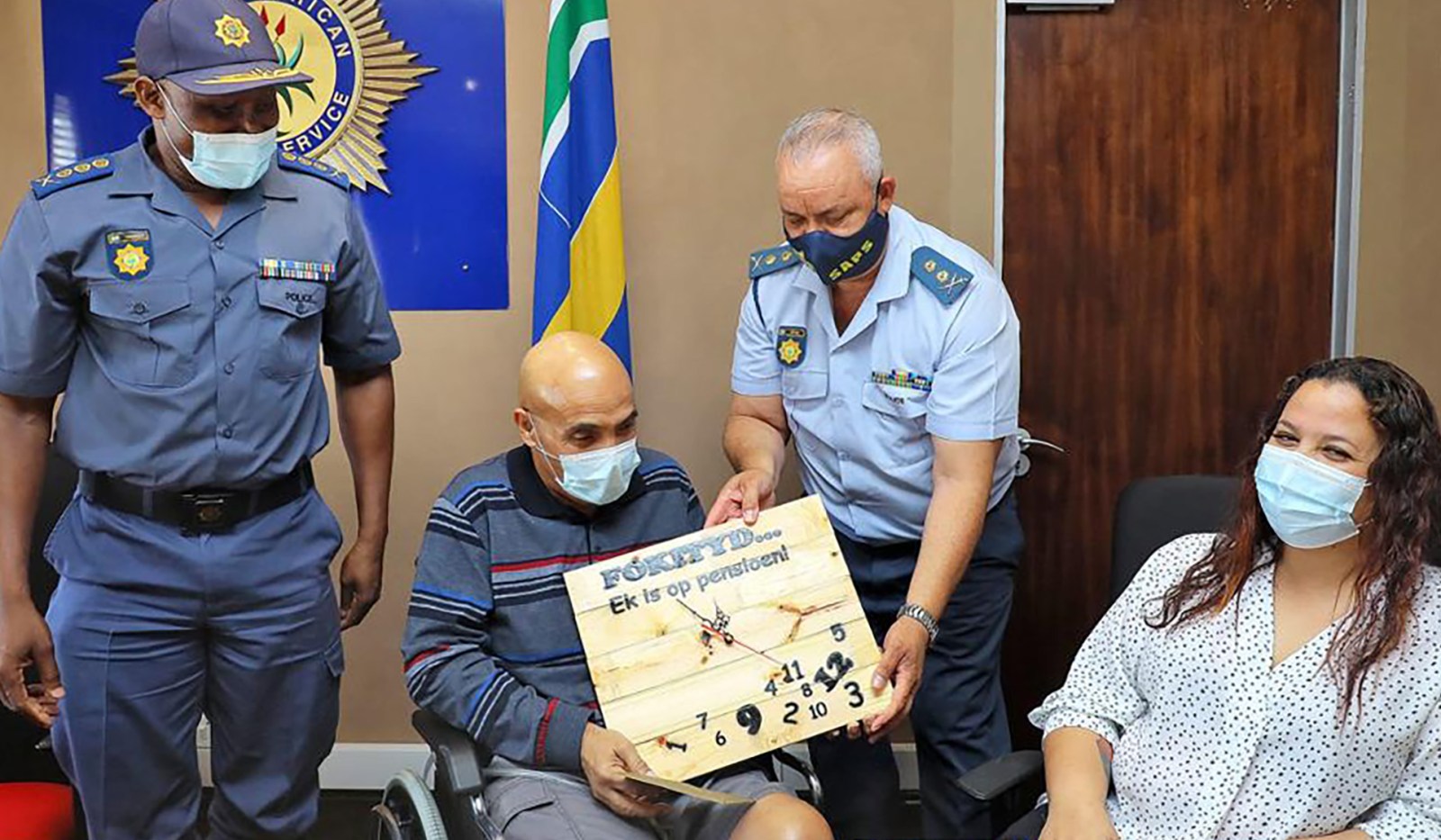 In the 1990s he investigated State links to the underworld but was accused of crimes he insists apartheid-era cops concocted. Nearly 25 years later, Lincoln, under protection due to work-related threats, is up against a nearly R5-million legal bill.

Retired Anti-Gang Unit boss Andre Lincoln, who previously investigated high-level crimes including how cops allegedly helped suspects get gun licences, may lose his pension if the State pushes ahead with billing him as part of an overall legal matter that has dragged on for nearly a quarter of a century.

Lincoln retired from the South African Police Service (SAPS) at the end of October last year.

He experienced serious health issues that resulted in both legs being amputated below the knee the month ahead of his retirement.

Lincoln was the commander of Lieutenant-Colonel Charl Kinnear, who also investigated State links to underworld crimes and who was assassinated in September 2020 in Cape Town. Kinnear was not under protection at the time of his murder.

Given the threats associated with serious crimes Lincoln has investigated, Lincoln is under State provided protection.

At the same time, the State Attorney is pushing for him to pay what could amount to around R4.8-million for previous court processes Lincoln has been involved in against certain police bosses.

On Friday 8 April 2022, the matter was meant to proceed in the Western Cape high court for the continuation of the taxation of some of those bills.

However, the taxation master who previously heard the case was not available, and it was not clear if they would be again.

During discussions in a court corridor, with Lincoln present and surrounded by bodyguards, it was decided the matter would be assigned to another taxation master and start from scratch at a later stage.

Lincoln’s legal cost representative Cora van der Merwe told Daily Maverick she would also request from State Attorney Leon Manuel a copy of the instruction letter he had. This to try and identify who exactly was driving the matter against Lincoln.

It is understood the Western Cape police management is in favour of scrapping a court judgment and therefore cost orders against Lincoln.

His overall battle has bounced back and forth between South Africa’s highest-ranking government officials for years.

It has also been in various tiers of courtrooms, even ending up on the doorstep of South Africa’s highest court, the Constitutional Court.

This letter, which Daily Maverick has seen, emphasised that Lincoln dedicated himself to fighting crime under extreme circumstances.

‘Threats and attempts on his life’

“He proceeded with unwavering efforts to combat the rampant gang activities in the Western Cape despite threats and attempted attacks on his life,” Nortje wrote.

“Lincoln tirelessly dedicated his entire police career to fight crime with distinction… Lincoln [retired] at the end of October 2021. The cost orders against him will be deducted from his pension. That will leave him and his family with almost no pension at all.

“As a matter of fact, the State Attorney informed the cost consultant on 25 August 2021 that SAPS will attach the pension of Lincoln.”

In September last year, Cele would not be drawn into publicly commenting.

His spokesperson Lirandzu Themba told Daily Maverick: “This is a private matter between the State and Gen Lincoln, therefore we can’t give any comments.”

In the letter to Cele, Nortje outlined Lincoln’s prolific career and the legal hurdles he repeatedly came up against.

Before 1994, under apartheid, Lincoln had been part of the ANC’s military wing, Umkhonto weSizwe.

He “was tasked with infiltrating the operations and structures of the Apartheid Police Force in the Western Cape.”

In 1996 South Africa’s first democratically elected president Nelson Mandela appointed Lincoln to head the Presidential Investigation Task Unit (Pitu) to look into figures including suspected mafioso Vito Palazzolo, who was from Italy but based in Western Cape at the time, and who was believed to have close ties to politicians and police officers.

Palazzolo, who maintained his innocence, was never criminally charged in South Africa.

Nortje said that at the time, 1996 to 1998, “the Western Cape was a National Party-controlled province and the hierarchy of the SAPS in the Western Cape consisted mainly of white Afrikaner males of the old order.”

In his letter to Cele, Nortje said during Pitu investigations, “Lincoln uncovered criminal activities of a police officer who was involved in counterfeiting, racketeering and fraudulent transactions with US counterfeit dollars…

“Pitu also came across a dormant investigation into an attempted assassination plot on President Mandela intended to be carried out at his inauguration in 1994… [Pitu investigators] retrieved the handcrafted rifle in a SAPS office in Johannesburg intended to be used in the assassination.”

In 1998 a police officer, Leonard Knipe, was appointed to investigate Lincoln. This resulted in Lincoln being charged with 47 crimes, including fraud.

He was convicted of 17 of these in 2003 and was kicked out the police service.

An acquittal, a scrapped settlement and court battles

But he fought back via legal processes and in 2010 was acquitted of the charges and so resumed his job. At the time, Cele was national police commissioner.

Of Lincoln’s time out of the police service, Norte said: “He was neither paid his salary and benefits including his forfeited pension for the period January 2003 to October 2010 nor was his prospects of promotion during the period 1998 to 2010 taken into consideration.”

Nortje said that in 2012 Lincoln wrote to then police minister Nathi Mthethwa saying he “was entitled to retrospective salary and pension.”

Lincoln was informed the matter would be settled and litigation was unnecessary.

The matter was not settled.

In 2017 Lincoln proceeded with a civil matter in the Western Cape high court, claiming R15-million in damages from the police minister for malicious prosecution, and in September of that year, it was ruled the prosecution against him had not been malicious.

Lincoln appealed and in October 2018 was successful, with a ruling that the prosecution was malicious, effectively vindicating him.

Around the same time, Lincoln was appointed to head the Anti-Gang Unit in the Western Cape.

Despite this promotion, the State Attorney approached the Supreme Court of Appeal to try and overturn his high court success and in June 2020 managed to do so.

But Nortje said that Cele, by then police minister, had not instructed the State Attorney to appeal this.

There were beliefs former national police commissioner Khehla Sitole or someone in the police’s legal services may have issued the instruction to the State Attorney without Cele’s nod.

Sitole, who was appointed to the top cop position under Jacob Zuma’s presidency that is now synonymous with State Capture allegations, prematurely stepped down from the position at the end of last month, in a move Ramaphosa said was in South Africa’s best interests.

During Sitole’s time as top cop, there was intense fighting in the police service.

Nortje said this was to appeal “on the basis that the SCA judgment was incorrect in that the civil claim was not against the Director of Public Prosecutions but against the police officers who maliciously set the law in motion”.

But the Constitutional Court did not grant Lincoln leave to appeal as the matter was not seen as one involving the constitution.

That did not happen.

This is where the State Attorney now fits in, effectively wanting to recover what was spent on court processes.

Claims of a campaign against cops

Lincoln is widely viewed as being aligned to fired Western Cape detective boss Jeremy Vearey and Peter Jacobs, the head of the police Inspectorate who was controversially transferred from heading Crime Intelligence last year.

All three have similar career histories linked to the ANC.

“There is an orchestrated stratagem to get rid of Jacobs, Lincoln and I,” he said in court papers.

“We exposed corruption in the police and we diligently committed ourselves to the eradication of gang activities and police corruption.”

It is beneath all this police friction that crimefighting has occurred.

“We hope a new cohort of policemen and women learn what it is to be a true servant of the people,” she had said. DM