A LIFE OF SERVICE

‘You haven’t seen the back of me yet,’ says retired Cape Town police general André Lincoln at event to honour him 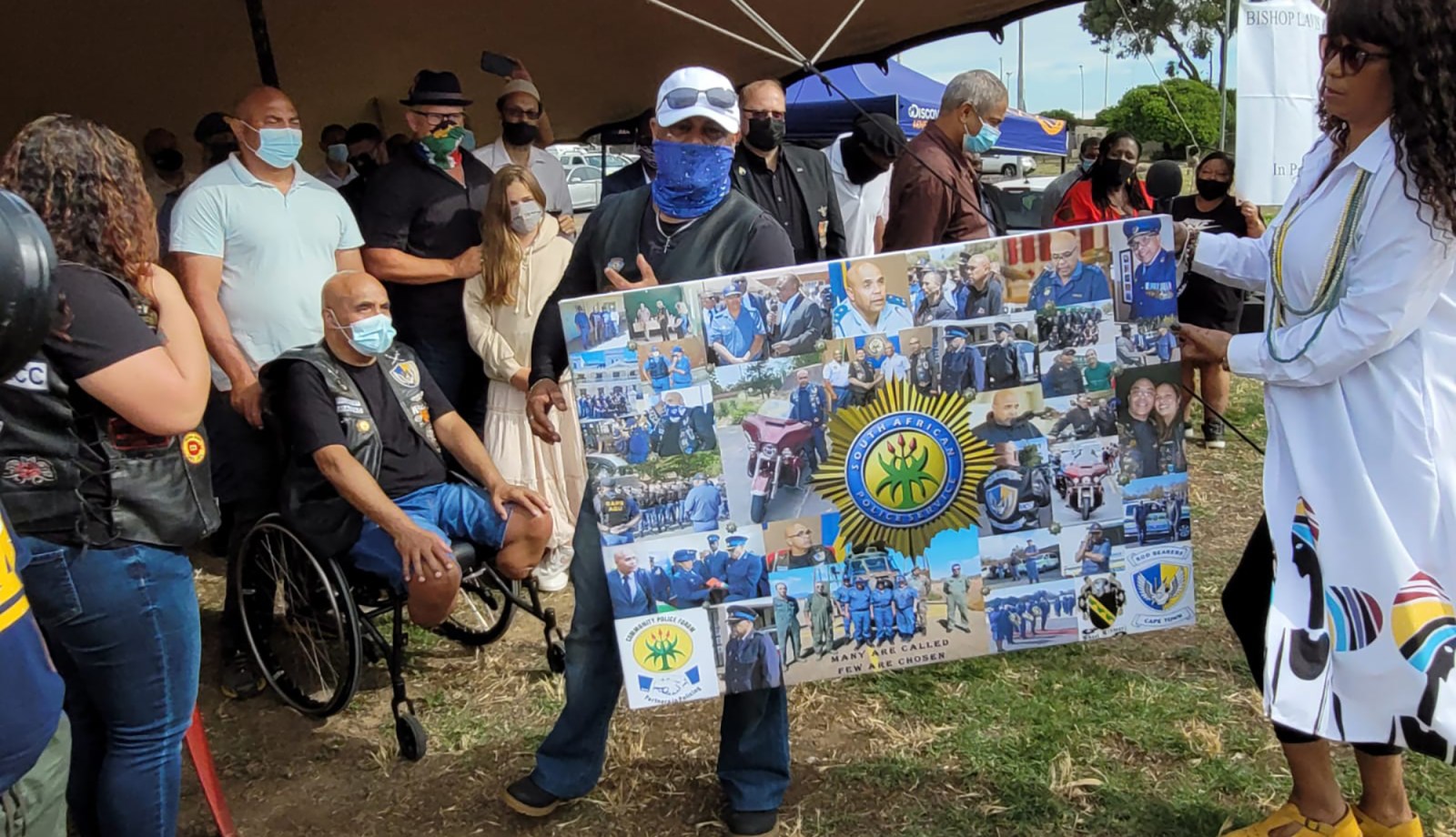 Andre Lincoln (seated left), who retired from the police service at the end of October, at a community-organised event held in his honour in Bishop Lavis, Cape Town, on 12 December 2021. Among those present were United Independent Movement leader Neil de Beer, fired top cop Jeremy Vearey and Nicolette Kinnear, the wife of slain policeman Charl Kinnear. (Photo: Caryn Dolley)

Major-General André Lincoln retired at the end of October after decades in the police service. This weekend, residents in Cape Town honoured him at an event in Bishop Lavis.

Major-General André Lincoln inspired a fellow police officer to start reading books, instilled the importance of discipline in another and made time to hear from mothers whose children had been killed in gang violence

He is also an avid biker and a father who encouraged loud family lunches on a Sunday with a soundtrack from the likes of Marvin Gaye and Nina Simone.

Many anecdotes about Lincoln were shared during a community-organised event in his honour at the Bishop Lavis sportsfield in Cape Town on Sunday.

Lincoln, up until recently the Western Cape’s Anti-Gang Unit head, who was in the 1990s appointed by Nelson Mandela to head an elite investigative unit, turned 60 on 28 October and officially retired at the end of that month.

On his last workday, the South African Police Service held a small ceremony marking his retirement.

And on Sunday, community members, former colleagues, members of the biking fraternity and his relatives gathered for the community event in his honour.

A number of security officers were present, seemingly to keep an eye on Lincoln, whose life has reportedly been under threat, and others present.

Lincoln recently experienced serious health issues and both his legs have been amputated below the knees.

On Sunday, sitting on a wheelchair between family, former colleagues and friends, he acknowledged those present.

“But my wife will tell you that when a child was shot or when a child died in any community, it knocked me the hardest.”

Lincoln said that there were many “fatherless” and “dysfunctional” homes and that he wanted to see such situations change.

“I’m going to be back in the community, working and striving to get some order and honour to our communities.

“From here I want to thank everybody, but I want to say: You haven’t seen the back of me yet.”

Jeremy Vearey, who was the Western Cape’s detective head until May this year when he was controversially fired over a series of Facebook posts, said his relationship with Lincoln dated back to long before they became police generals.

Their understanding of a sense of service and putting the community first dated back to their time in the ANC’s military wing, Umkhonto weSizwe (MK). They were both also members of the command structure of the ANC’s intelligence wing in the Western Cape.

“[Together we dealt with] circumstances where we were really tested with this sense of serving something bigger than yourself,” Vearey said.

“We had to face enemies in the Security Branch and the police who had our names on a target list to kill us at any point in time.

“So, our whole life, in actual fact, was about being aware that the ultimate meaning of sacrifice is death.”

Just before 1995 Vearey and Lincoln were “taken into well-paid jobs at the… new National Intelligence Agency.”

Joe Nhlanhla was intelligence minister at the time.

But, Vearey said, “because we believed that we need to serve the people closer to the ground instead of secretly in some corner somewhere”, he and Lincoln, when asked to, readily moved over to the police service where their salary and benefits decreased by 30-40%.

“That, I think is an important lesson… when it comes to service,” Vearey said.

“But when you’re dealing with the enemy, like organised crimes and gangs, there’s no salary that will ever be enough to beat what they can bribe you with.”

Vearey said Lincoln was no ordinary policeman, but someone who always put thought into his actions and was a revolutionary “born in blood and struggle”.

“That spirit will continue to carry him,” Vearey said.

“We will still serve the people in whatever form to the best of our ability.

“We don’t retire from the task of transformation and serving our people. I think, as I’m fond to say and people don’t like… I use this term peacefully… we will continue the war, as comrades, as we were way back in the underground and right through to now, with the same energy.”

Vearey has previously said he and police officers including Lincoln were being targeted because of investigations they conducted, some of which involved pursuing figures within the state.

He is still challenging his dismissal from the police service.

Nicolette Kinnear, whose husband, Charl Kinnear, was assassinated in September 2020 outside their Bishop Lavis home, was in attendance.

Kinnear was a member of the Anti-Gang Unit, had investigated police complicity in crimes, and worked under Lincoln’s command.

Nicolette Kinnear told Lincoln that while there had been arguments, her husband “loved you dearly, that much I can tell you”.

Neil de Beer, leader of the United Independent Movement and a former MK undercover intelligence operative under Lincoln and Vearey’s guidance, said Lincoln had stood for truth and was persecuted for it.

Daily Maverick has reported that in the 1990s Lincoln claimed fellow police officers were targeting him because of critical investigations he was heading, some of which led back to the state. He was criminally charged, convicted and kicked out of the police service.

After overturning the convictions in the courts, he re-entered the service in 2010. However, legal action against him could negatively affect his pension payout.

His legal representative, advocate Johann Nortje, has said: “Lincoln retires with only 11 years of service instead of 26 years.”

More recently, claims that Lincoln was corrupt again did the rounds.

In 2020 it was alleged during a court case that Lincoln had been involved in orchestrating an incident involving a hand grenade outside Kinnear’s home.

The State later pointed to Nafiz Modack, an accused in the Kinnear murder case, as allegedly having orchestrated the grenade incident.

Daily Maverick recently also reported that the Independent Police Investigative Directorate had found the Anti-Gang Unit, launched in 2018, was not adequately resourced.

She hoped the unit would receive more resources and “continue your legacy”.

“We hope a new cohort of policemen and women learn what it is to be a true servant of the people,” Lukas said.

“You can only serve people if you’re humble,” Jones said.

Other lessons from Lincoln included being disciplined — for example, always being punctual — and that “the community comes first”.

Trevor Harker, representing the Western Cape’s biker community, said he met Lincoln in Sub A (what is now Grade 1), at St John’s Roman Catholic School in the Cape Town suburb of Kensington.

Harker said both Lincoln’s parents had played a pivotal role in shaping his own character.

One of Lincoln’s daughters, Nikki Lincoln, said that as a young child it had been difficult to understand the duties of a police officer.

Her father, she said, was often away and missed important family events and happenings because he was prioritising “the safety, honour and welfare” of the country and police officers he commanded.

She added: “That absence meant he could be present for the communities who really needed him.” DM