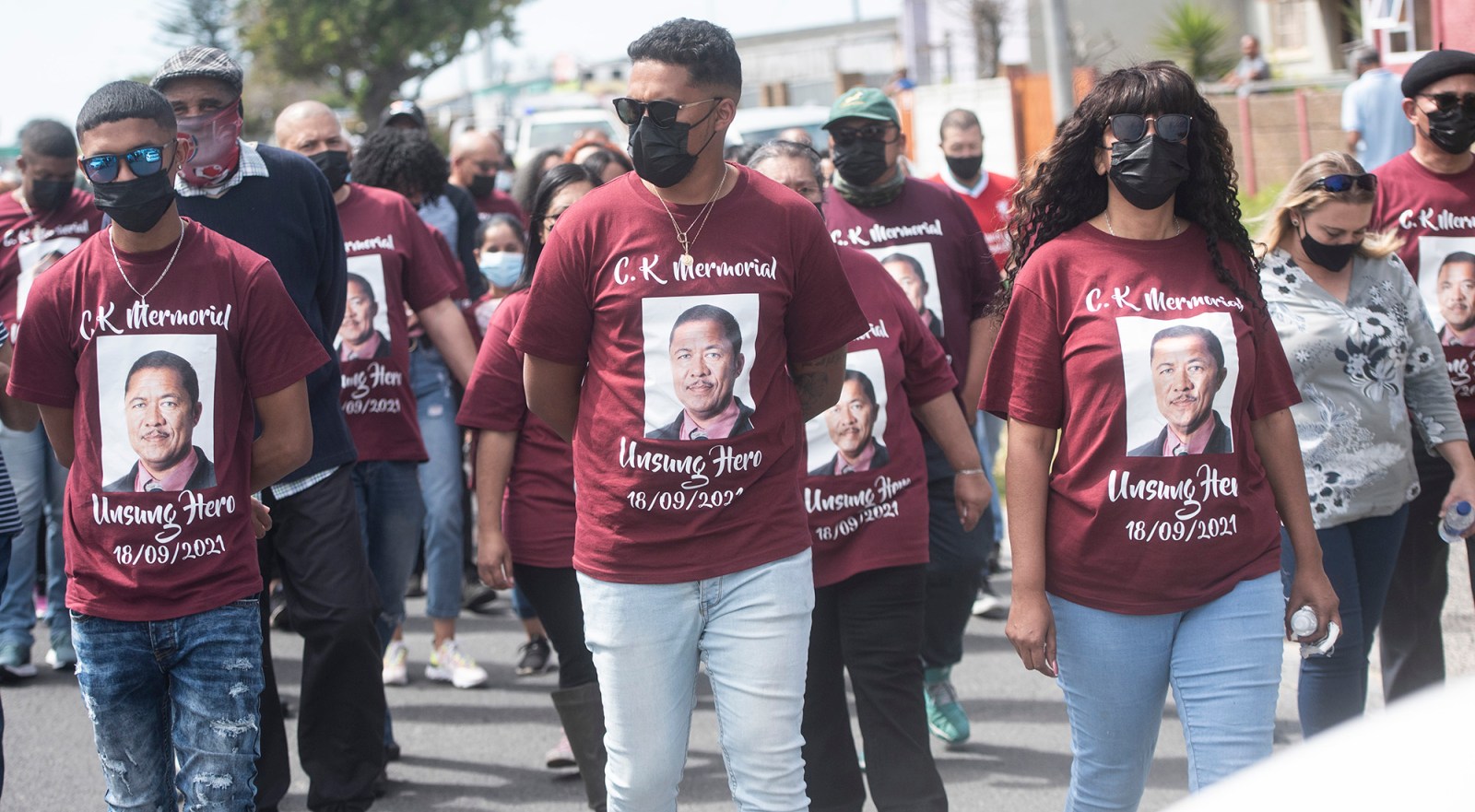 Nicolette Kinnear with her sons Carlisle and Casleigh at the one-year memorial lecture of Lt Col Charl Kinnear in Bishop Lavis on September 18, 2021 in Cape Town, South Africa. The anti-gang unit detective was assassinated outside his home in Bishop Lavis on 18 September last year. (Photo: Gallo Images/Brenton Geach)

The day a still-to-be apprehended assassin aimed his gun at Anti-Gang Unit commander, Lieutenant-Colonel Charl Kinnear and killed him, was a turning point in exposing the deep nexus between organised crime and law enforcement in South Africa.

The Independent Police Investigative Directorate (Ipid) has just completed a comprehensive investigation into the circumstances leading up to and surrounding Kinnear’s assassination outside his home in Bishop Lavis on 18 September 2020.

The investigation was prompted after Kinnear’s murder and the public outcry which followed when it was revealed that the decorated detective had been left vulnerable and exposed by his employer, SAPS.

Ipid’s explosive report should result in a major shake-up in the Directorate for Priority Crime Investigation, also known as the Hawks, the structure of the AGU and elsewhere in SAPS where officials have been found to have acted improperly or criminally.

The consequences of Kinnear’s murder are set out in no uncertain terms and could result in the collapse of those high-profile cases he was still investigating.

Kinnear knew too much, he told his superiors, as they tread water while attempting to navigate through a fog of lethal “factionalism” in the SAPS in the Western Cape.

Elsewhere on these pages, Caryn Dolley unpacks each element of the significant findings and recommendations of the Ipid report.

Kinnear’s murder had been meticulously planned and the killers had illegally used a cellphone tracking location-based service known as a “ping” to track his every move.

Former rugby player and debt collector, Zane Kilian, as well as an underworld figure, Nafiz Modack, are among those who have since been charged for Kinnear’s murder. The matter is still making its way through the courts.

What the murder of Kinnear also exposed is the role of cellphone networks and private security in the illegal surveillance of SAPS officials as well as private citizens.

Prior to his murder, Kinnear, who was working single-handedly on at least 20 cases involving illegal gun licences, corrupt SAPS colleagues and prominent organised crime figures had circulated in 2018 a 59-page memorandum to his superiors informing them his life was in danger.

He set out how a rogue Crime Intelligence unit in the Western Cape, consisting of at least six members, had been targeting SAPS colleagues, interfering with investigations and acting criminally by colluding with underworld figures. The unit had targeted Kinnear, Vearey, Jacobs and other SAPS members.

Jacobs later recommended to Sitole and his superiors that the Western Cape unit, under the command of Major General Mzwandile Tiyo, be disbanded and some members criminally charged.

Jacobs, before his suspension by Sitole, in fact wrote at the time that “It is the considered view of this office that the existence of the team in its operations and reporting line, outside of the prescribed structure, has served to undermine the integrity of the office of the Division Crime Intelligence and possibly the person of the divisional commissioner, Lieutenant-General Jacobs.”

What the Ipid investigation sets out is that all of the evidence and the warnings to SAPS top brass were either ignored, not acted upon or acted upon when almost too late.

It exposes deep investigative weaknesses, broken chains of command, insufficient experience among AGU staff including its commander, Andre Lincoln, as well as a lack of a sense of urgency with regard to hugely pressing matters in a national investigation.

The consequences for all concerned extend beyond SAPS to the family of Kinnear, his wife Nicolette and his sons Casleigh and Carlisle, who lived with the constant fear and threats and who have rightly criticised SAPS for literally throwing Kinnear to the wolves. DM