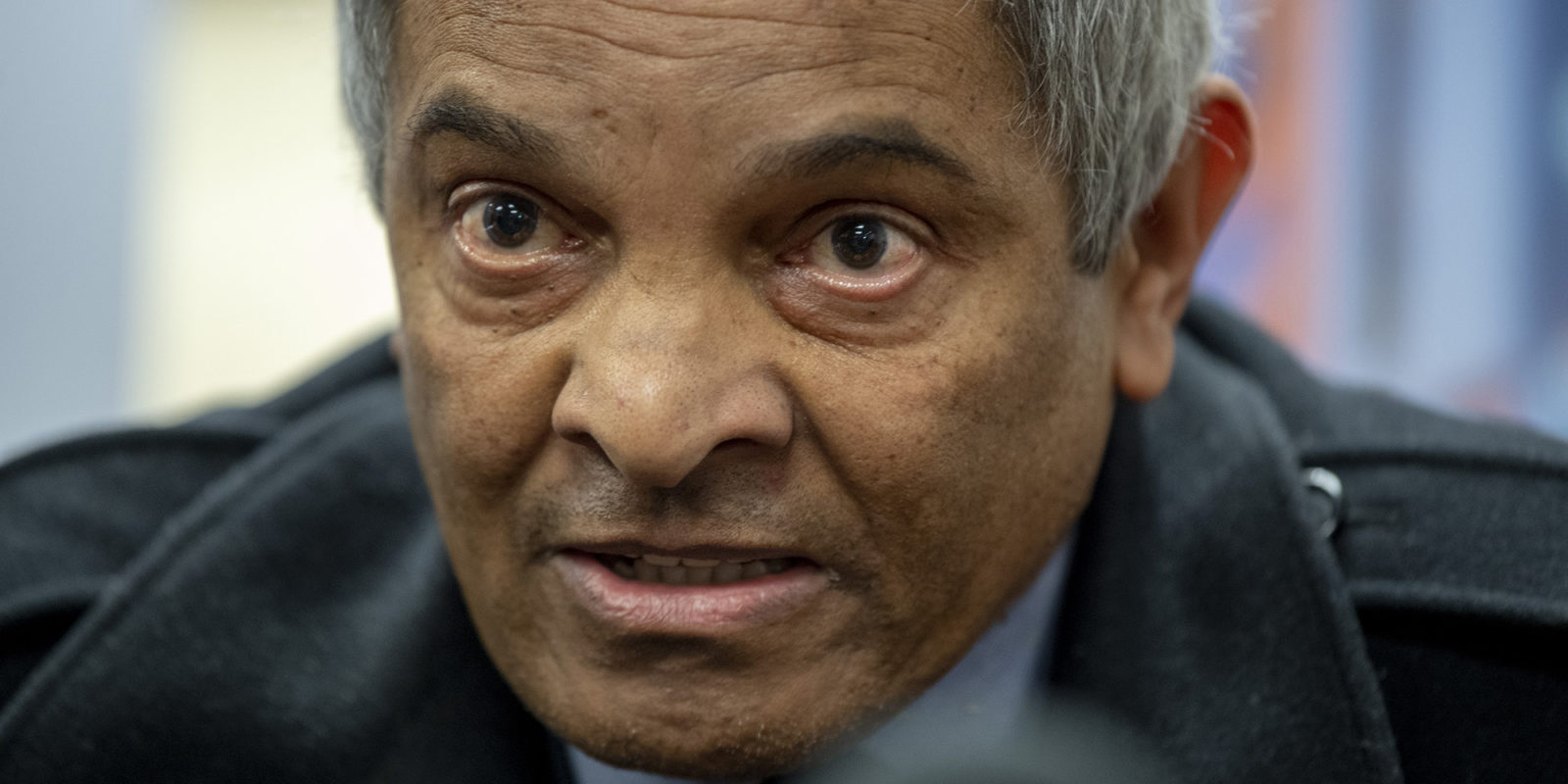 Major-General Vearey, who has a rich ANC-linked intelligence history, started his police career in April 1995. Now, more than 26 years later, after taking on dozens of gangsters and heading critical investigations, his job is on the line – over Facebook posts.

The posts contained Vearey’s comments, which did not refer to anyone by name, with links to news articles.

Vearey has an intense intelligence history rooted in the ANC. He was once a bodyguard of the first democratically elected president Nelson Mandela and is among the police officers who saw to it that Hard Livings gang boss Rashied Staggie (murdered in December 2019) was jailed.

He was recently the subject of what the SA Police Service called an “expeditious procedure meeting” relating to the Facebook posts.

In a decision dated Thursday, she found: “Having applied my mind properly to the facts and information at my disposal, having considered the circumstances under which the offence was committed, and after checking the law on the matter, I am of the view that, imposing a sanction short of dismissal over such a serious offence would be tantamount to condoning the conduct of the employee.”

Daily Maverick has confirmed that the Police and Prisons Civil Rights Union (Popcru) is dealing with the matter.

A verification or adjustment of the proposed sanction – in this case dismissal – against Vearey needed to be made by national Police Commissioner Khehla Sitole.

However, the finding against Vearey also relates to Sitole, so there could be some conflict of interest.

It is understood Popcru will also address this.

The internal police action relating to Vearey is just the latest in several skirmishes which have manifested as disciplinary proceedings and rebuttals via courts, among South Africa’s most senior police officers.

In the case of Vearey, the effective disciplinary against him was held as an expeditious process – basically a condensed form of the usual disciplinary procedure that does not involve witnesses being called to testify or be cross-examined.

It is understood that some within the police view this type of process as one-sided.

Every employee is accountable for statements and comments made by him or her and must give careful consideration to what he or she posts and perceptions that may be created by his or her posts.

Ntshinga, in her findings relating to the process, which Daily Maverick has seen, said Vearey’s Facebook posts alerted people to, among other things, “the manner in which the National Commissioner of the SAPS is being disrespected by his subordinate”.

“The acts committed, allegedly by the employee, had great potential to inspire others, both within and outside the SAPS, to rise and resist the authority of the National Commissioner and of those who are in the leadership of the SAPS. This factor alone has got potential to collapse levels of discipline in the SAPS, if it is left unchecked,” she said.

“I have noted with great concern that the employee had, in the commission of the alleged misconduct, used words such as ‘MOER HULLE’ – which literally translated means ‘Hit Them!’ Surely, this statement has got potential to cause the situation within the SAPS to become toxic and chaotic.”

She found Vearey guilty of misconduct.

He had until Thursday, 27 May 2021 to provide mitigating factors in relation to the potential sanction that could be handed down to him.

However, Ntshinga found he should be dismissed.

It is not the first time Vearey has come up against cop colleagues.

He previously claimed that certain police officers, along with suspects, were running a smear campaign against him.

In June 2016, he and colleague Peter Jacobs (also a former Umkhonto weSizwe member), who was Western Cape head of Crime Intelligence at the time, were suddenly transferred while heading a massive investigation into allegations of cops funnelling firearms to gangsters.

This was under Jacob Zuma’s presidency.

Vearey, in an affidavit in that Cape Town Labour Court matter, said there were perceptions about him because he had been routinely involved in seeing to it that a statement by former MP Vytjie Mentor – relating to State Capture – was recorded.

He and Jacobs successfully fought their transfers in the Cape Town Labour Court.

Both have since come up against police bosses again, with Jacobs subsequently becoming national Crime Intelligence head, and recently, in further internal police friction, being suspended then controversially transferred to head the police’s Inspectorate.

This has resulted in further links between Jacobs and Vearey.

Jacobs represented Vearey in the recent proceedings against the latter relating to Facebook, while Vearey has represented Jacobs in a disciplinary process that Jacobs was central to.

In the Facebook saga, Vearey was charged under a provision of the SAPS Discipline Regulations, namely that he “brought the name of the employer into disrepute.”

Jacobs had countered that there was evidence suggesting that police officers, including Crime Intelligence colleagues, had abused the account.

There were therefore some within the police who believed Jacobs was being unfairly targeted because of what he uncovered relating to the account.

In this matter against Jacobs (as well as five of his colleagues), claims surfaced that three police officers steering the disciplinary process did not have security clearance and were therefore not legally entitled to have access to classified documents that were critical to the matter.

Jacobs, through the Johannesburg Labour Court, managed to have this disciplinary halted in March.

In the matter against Vearey, the disciplinary meeting decision said that between 20 December 2020 and 25 February 2021 (a period which coincided with disciplinary and court happenings relating to Jacobs) Vearey had a public Facebook account.

It said that in 2017 police created a rule called “National Instruction 5 of 2017” which instructed that “employees of the SAPS may not engage in Online Publication or communication on Social Media, which could bring the Service (SAPS) into disrepute”.

“Every employee is accountable for statements and comments made by him or her and must give careful consideration to what he or she posts and perceptions that may be created by his or her posts. The content of the posting must not be illegal or disrespectful.”

The written decision said Vearey posted the following on Facebook:

The written decision said: “Two Senior Officers, Lieutenant-Generals Ledwaba and Vuma, whom the National Commissioner had relied upon in dealing with the case of an alleged misconduct against Lieutenant-General Jacobs, became aware of the messages… and according to them, the acts of the employee had made them feel intimidated, threatened and unsafe; and the conduct of the employee was meant to degrade the National Commissioner and/or disrespect the authority of the leadership of the SAPS, thus bringing the employer into disrepute.”

“Ledwaba” appeared to be referring to Lieutenant-General Nneke Ledwaba, who together with Sitole was interdicted in March from proceeding with the PPE-related disciplinary against Jacobs.

“Vuma” appeared to be a reference to Lieutenant-General Francinah Vuma who Daily Maverick previously reported was tasked by Sitole to probe the PPE irregularity allegations.

Vearey, according to the meeting decision over the Facebook allegations, had countered that he was innocent of misconduct as detailed in the SAPS Regulations.

I must disagree with the employee, in that the words used by the employee in one of his postings were derogatory, degrading and insulting.

“The elements of the charge must conform to the specifics, which inter alia includes the location (not on or about), date and time (on or about), and the employer’s charge sheet does not meet such.”

Vearey further said the allegations he faced should not result in an expeditious process.

The online news articles he linked to in his Facebook posts, he countered, were publicly available and his posts were not abusive towards anyone nor disrespecting.

“The matter of Lieutenant-General Vuma feeling unsafe cannot be attributed to Major-General Vearey, as he was not mentioned in the case that was reported,” the meeting decision, about Vearey’s stance on the issues, said.

“The National Commissioner is nowhere reflected or mentioned in the statement, especially when it is clear that all the other persons who featured in the pictures were not interviewed.”

Vearey had also felt the word “moer” was taken out of context.

As part of his defence, Vearey had produced two bundles of documents, one titled “INTERVIEW/LECTURES MAJ GEN VEAREY IN AFRIKAAPS vs AFRIKAANS” and the other “PRISON LANGUAGE BOOK BY: MAJ GEN VEAREY”.

Despite Vearey’s stance that he was not guilty of misconduct, it was found that he was.

“I am of the view that the employee is refusing to take responsibility for his own actions,” Ntshinga found.

“Whilst defending himself against the allegations of misconduct at the Meeting, the employee had contended that, ‘the words used in his postings were not abusing anyone and did not constitute misconduct’.

“I must disagree with the employee, in that the words used by the employee in one of his postings were derogatory, degrading and insulting. It is probable that any reasonably thinking human being who has not lost the ability to differentiate right from wrong, would be offended by the acts of the employee, if he or she became aware of the incident(s).”

Ntshinga then referred to Jacobs and brought up the issue of him, as head of the police’s Inspectorate, representing Vearey in the disciplinary meeting.

She said national, provincial and divisional commissioners (such as Jacobs) had “the power… to confirm the dismissal of an employee from the SAPS or to vary a sanction of dismissal on account of misconduct.

“I reasonably suspect that the conduct of Lieutenant-General Jacobs is not consistent with the very same Regulations that he is, by law, required to uphold and apply.

“It remains to be seen how Lieutenant-General Jacobs is going to be dealing with disciplinary matters involving the employees resorting under his area of jurisdiction, in the future.”

Ntshinga therefore made a special recommendation that Sitole “consider addressing the conduct of” Jacobs.

The Western Cape police referred a query on the finding against Vearey to the national police. National spokesperson Brigadier Vish Naidoo said: “Please allow me to reiterate that the SAPS does not provide details of any internal processes of the police in the public domain. However, we may consider issuing a media statement depending on the outcome of disciplinary matters.” DM