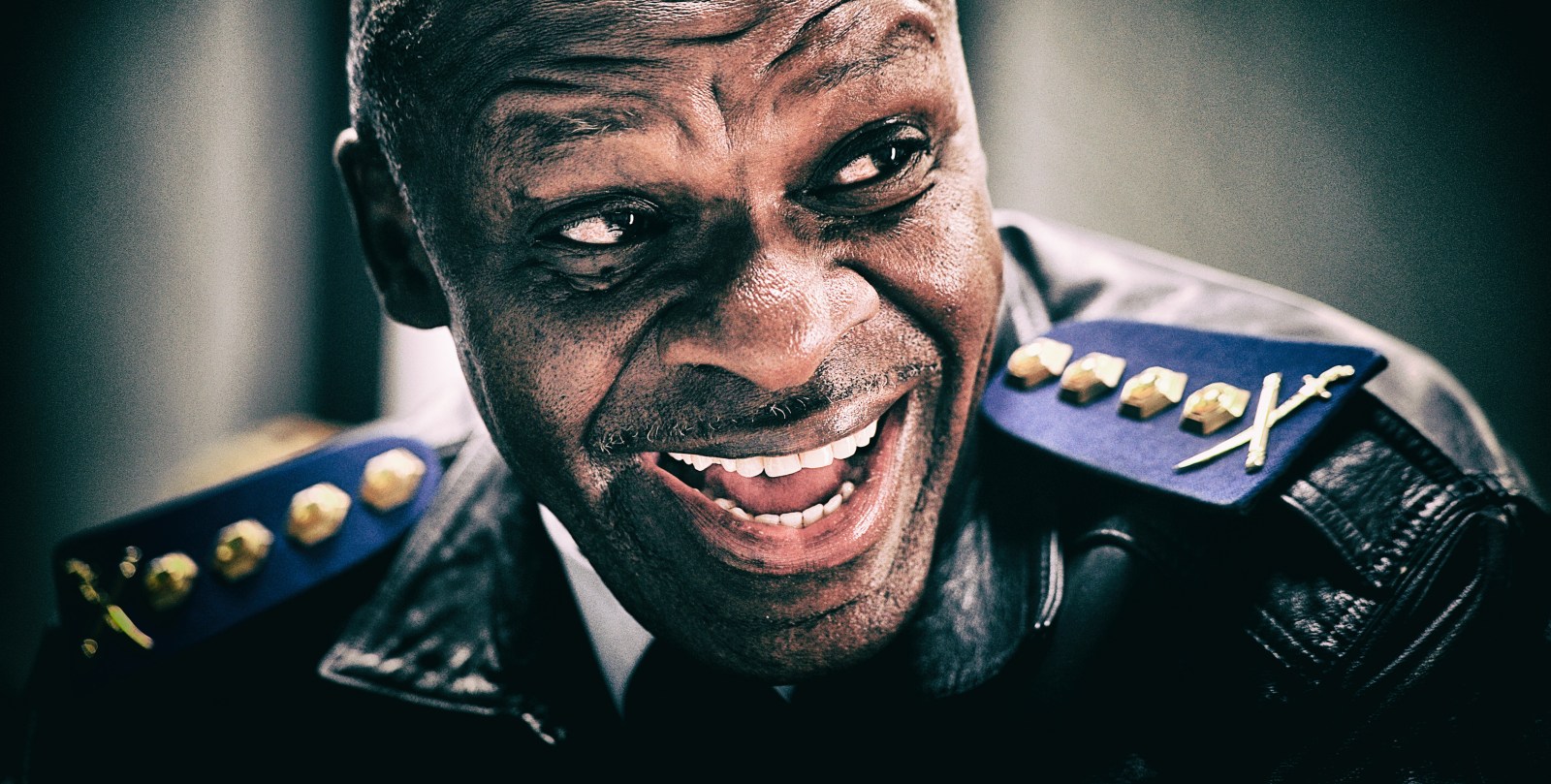 National police commissioner General Khehla Sitole during an interview about fight against crime after the release of crime statistics on September 15, 2018 in Johannesburg, South Africa. (Photo by Gallo Images / City Press / Leon Sadiki)

What exactly was the ‘possible national security threat’ of some ‘magnitude’ that endangered South Africa ahead of the ANC’s highly charged elective conference at Nasrec in 2017?

Documents in a court action have revealed how SAPS Crime Intelligence attempted to have R45-million released from the Secret Service Account (SSA) in 2017 to deal with a “possible national security threat” of some “magnitude” before the ANC’s highly charged elective conference at Nasrec in Johannesburg in 2017.

Lieutenant General Francinah Vuma, divisional commissioner: financial management and administration, in an affidavit to the South Gauteng High Court, set out how that December a “minister in the security cluster” had alerted then president Jacob Zuma of the alleged imminent force majeure.

The nature of this threat, which warranted the secret and emergency procurement of a listening device – known as a grabber – at the outrageously inflated price of R45-million, has not yet been disclosed or determined.

It is now up to Jennifer Nthabiseng, the new head of the Independent Police Investigative Directorate (IPID) to pick up where Robert McBride left off. McBride was derailed by SAPS (and Minister of Police Bheki Cele) when he attempted to have documents related to the procurement declassified for more than three years. A court has now ordered this.

All eyes will now be on Nthabiseng’s leadership as IPID investigators will surely interview those who first brought news of the imminent threat of great magnitude to the republic and what this was.

Meanwhile, we go back in time to 2017 with eyes on potential threats to national security.

By the end of 2017 – Zuma’s annus horribilis – the president of the ANC and South Africa had been barred from attending the funeral of stalwart Ahmed Kathrada in March, only to face in April massive national #ZumaMustFall protests that spilled out on city streets across the country.

Zuma’s back was to the wall and the president was vehemently publicly denounced at all of these events, which drew considerable crowds and international attention.

The air was thick with gatvol

Finance Minister Pravin Gordhan and his deputy Mcebisi Jonas were fired on their return from an investor’s roadshow abroad in March. This, after Zuma claimed to have received an “intelligence report”.

Perhaps this was the threat? Malusi “We gon’ be alright” Gigaba then spent 12 months puckering the hot seat, swinging the keys to the kingdom around his index finger until he was shuffled out in early 2018.

On 23 August 2017, two weeks after Zuma had narrowly survived a sensational secret vote of no confidence in parliament, he appointed his loyal former bodyguard, General Bhoyi Ngcobo, to act as the head of the key SAPS division, Crime Intelligence.

This gave Ngcobo authority over the SSA, along with National Police Commissioner Khehla Sitole as the ultimate accounting officer.

What we do know from IPID’s court submissions is that it was Ngcobo who was, according to witnesses, “pushing the deal” in December 2017.

At more or less the same time as Ngcobo was appointed, an intelligence “dossier”, Operation Wonder, surfaced. This may or may not be linked to or relate to the “threat”.

Daily Maverick was sent a copy of the report of an alleged threat to assassinate Fikile Mbalula, who was minister of police at that time. The report was so clearly bogus we decided not to publish it. This was also after neither the minister nor his adviser Bo “Black Swan” Mbindwane would confirm that the threat was regarded as clear and present by the law enforcement cluster.

City Press, however, ran with a front-page story about the opaque and garbled, copy-and-paste “intelligence report”.

Whoever needed the story out in public had succeeded: it was on the record.

The threat, of course, came to nought. No arrests, no investigation, no statement from the minister himself. Just smoke and mirrors.

October was no better for Zuma when the Supreme Court of Appeal dismissed his and the National Prosecuting Authority’s (then headed by Shaun Abrahams) appeal of a High Court ruling that the 2009 decision to drop corruption charges had been irrational.

On 8 December, Judge Dunstan Mlambo in the North Gauteng High Court ruled that the appointment of Abrahams had been unlawful and that the director of public prosecutions should vacate the position forthwith.

Then, 13 December delivered another body blow when Mlambo found Zuma’s attempt to review Public Protector Thuli Madonsela’s recommendations in her State Capture report had been “ill-advised and reckless”.

The evening of the same day, a clandestine Crime Intelligence meeting with Inbanathan Kistiah, director of I-View who was “supplying” the phone signal grabber, took place at the Garden Courtyard Hotel in Pretoria.

As the ANC’s conference loomed, a bunch of top brass, accompanied by Mbindwane, were caught on CCTV cameras at the meeting.

McBride, however, had caught wind of the unauthorised and unnecessary purchase and alerted Sitole, who was compelled to call off the apparent sleight-of-hand to have R45-million flushed out of the SSA.

Meanwhile, rumours swirled of potential turncoats, poisoners and traitors in the ranks of ANC members set to change the course of the party and the country.

Court documents reveal that as soon as Zuma had been alerted in what must have been early- to mid-December by the security cluster – with David Mahlobo as the minister at the time – a series of events were set in motion by Sitole.

He, in turn, tasked his deputy, Francinah Vuma, as well as Lieutenant-General Lebeona Tsumane, the deputy national commissioner: crime detection, “to deal with the threat further”.

This they did by trying to procure a grabber from a bankrupt company with a price tag on steroids.

IPID’s later investigation turned up no need at all for the device, which sells on the open market for around R5-million.

As we know, the ANC’s 54th elective conference kicked off on 16 December with an almost three-hour address by outgoing President Zuma, who admonished everyone from alliance partners to the media and civil society for causing “problems” for the ANC.

The torrid year ended even more bleakly on 20 December when the Zuma faction unexpectedly found their candidate, Nkosazana Dlamini Zuma, pipped to the ANC leadership post by Cyril Ramaphosa.

It had been a shockingly unforeseen victory as David Mabuza, now deputy president, had thrown in his lot with the “CR camp” at the last minute.

The following day, 21 December, Judge Billy Mothle granted an order that an inquiry into the fitness of NPA heads and Zuma acolytes Nomgcobo Jiba and Lawrence Mrwebi be instituted.

Of course, the biggest threat to Zuma and the Radical Economic Transformation (RET) faction as it was self-identified at that conference was Ramaphosa himself – and those who would help elect him as president of the governing party.

That and the fact that pointsmen and -women who had been shifted into key positions in law enforcement by Zuma for years were dropping like flies.

The RET dream where Zuma would be replaced with Dlamini Zuma at the end of his term as president of South Africa in 2018 evaporated, as did, gradually, the wall of protection surrounding the former president’s key supporters and enablers, including those placed within SAPS.

As Ramaphosa was sworn in as the new president of the ANC and once Zuma was later forced to resign in February 2018, the heat, hysteria, fear and loathing of Nasrec subsided – at least for a while.

As High Court Judge Norman Davis remarked when he handed down judgment on 13 January 2021, declassifying the documents related to the procurement, no one in SAPS, in any of their court submissions, could explain what had become of the “major threat” after the R45-million Secret Service Account heist had been thwarted by IPID.

It is still a relevant question someone will have to answer.

Davis also remarked that SAPS, while it claimed to be acting in the interests of “national security”, was, in fact, looking after the interests of the ANC, or at least a faction in the ANC.

To steal public money to fund party-political power struggles or activities is criminal and a subversion of democracy.

Nasrec is not the first ANC elective conference where allegations that factions hijacked state resources to manipulate an outcome surfaced.

There is 2012’s Mangaung conference and the alleged R50-million one Crime Intelligence operative, KGB Tshabalala, flashed around in a joint operation with moonlighting military intelligence members. This too remains the subject of ongoing investigation.

That story is in the process of unfolding in ongoing attempts to clean out SAPS leadership of criminals.

As for the national threat, it turned out to be Zuma himself. DM168