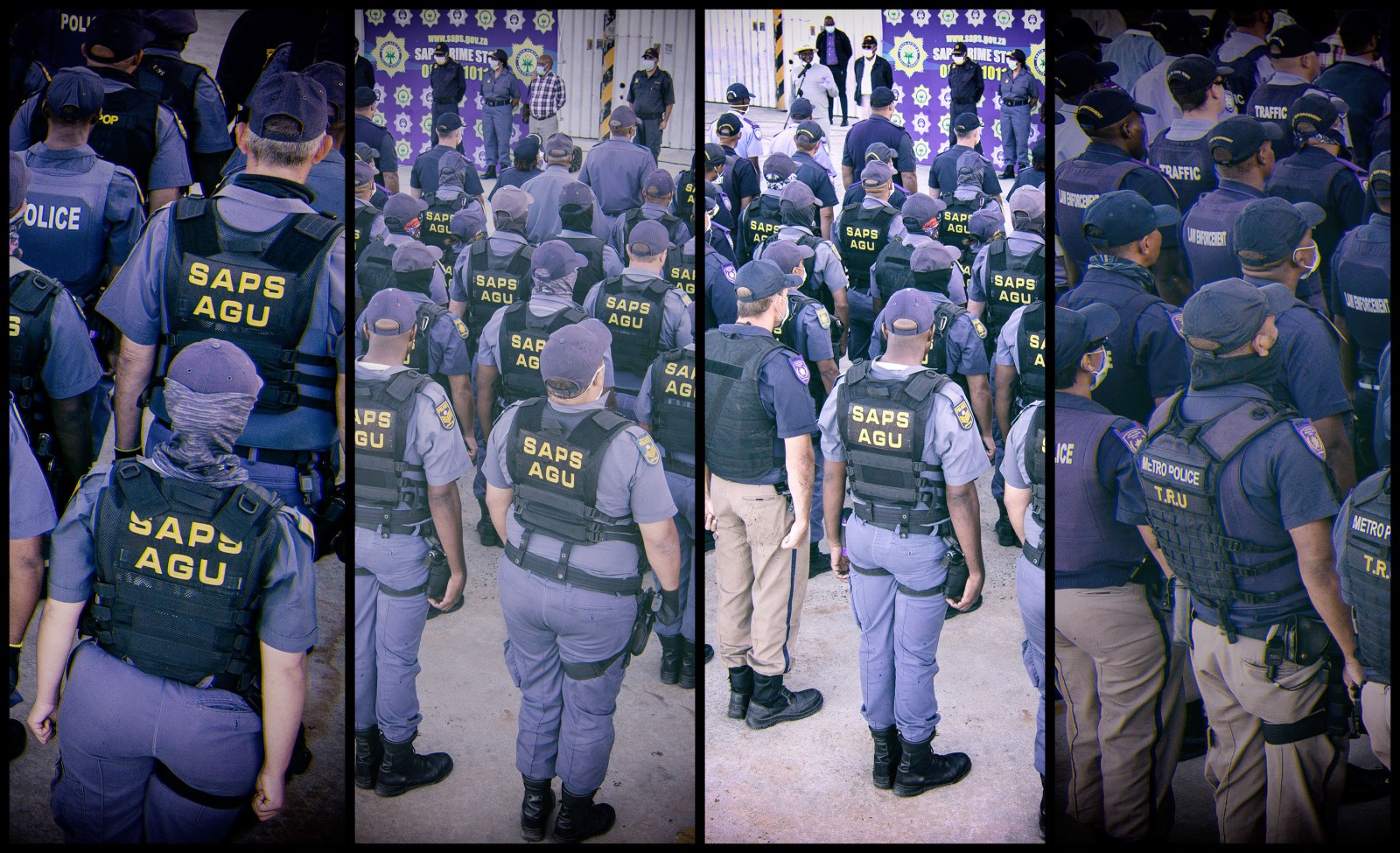 The Western Cape is the most gang-infested province in South Africa, so, when President Cyril Ramaphosa launched an Anti-Gang Unit in November 2018, there were feelings of relief. But now it seems the unit may have been something of a gimmick ahead of a general election, with officers expected to tackle organised crime without proper resources.

Towards the end of 2018, roughly six months before a general election was held in South Africa, President Cyril Ramaphosa threw his weight behind an Anti-Gang Unit (AGU) launched in the Western Cape.

The strategy was necessary given the prevalence of gang-related violence in the province. Children are often caught in crossfire and left wounded or dead in gang shootings.

Then there are the high-profile incidents.

On 30 October 2018, just three days before the unit’s official launch, advocate Pete Mihalik was assassinated outside a school in the Cape Town suburb of Green Point, underlining just how brazen organised crime had become in the Western Cape.

It was in the immediate aftermath of his murder that the AGU was publicly announced.

The November 2018 edition of the South African Police Service’s magazine featured its launch — a visually impressive event that involved vehicles being handed over and an air unit display.

Among those present were Police Minister Bheki Cele and Ramaphosa.

The police magazine quoted Ramaphosa: “The Anti-Gang Unit is an indication that government has heard the pleas of the citizens who are crippled with fear because of gangsterism, and government is now acting to tackle the problem head-on.”

Ramaphosa’s use of the word ‘now’ seemed to suggest the timing of the AGU’s launch was deliberate — the need for the unit had been critical for a long time, but it only happened six months before a general election.

The article continued: “At the launch, members of the unit formed part of the parade of the Guard of Honour and all the integrated law enforcement agencies that saluted the President. President Ramaphosa unveiled the first batch of vehicles that will form part of about 50 vehicles that will be deployed to gang hotspots, including Hanover Park…

“The proceedings were concluded with a parachute jump, flypast by the SAPS Air Wing, and displays demonstrating the effectiveness of the specialised units of the SAPS.”

But beneath all this fanfare, it seems police officers attached to the AGU were not given the support they needed to tackle organised crime.

This is not to say they were not up to the job — before the end of the month, Cele reported that the unit’s members had carried out 119 arrests.

This means clean, honest officers faced a double threat — from inside and outside SAPS.

Two officers linked to the AGU were arrested this year.

This, however, does not mean the entire unit was corrupt, but rather that checks and balances within it weren’t what they should have been.

An Independent Police Investigative Directorate (Ipid) investigation, the findings of which cop bosses are currently analysing, has indeed found that the AGU was not all it was hyped up to be.

Ipid’s investigation focused on the lack of security provided to AGU detective Lieutenant-Colonel Charl Kinnear in the 15 days leading up to his assassination on 18 September 2020. He was shot outside his Bishop Lavis home in Cape Town.

Kinnear had been investigating several underworld crimes at the time of his murder.

A report based on Ipid’s investigation, which seems to have wrapped up in September this year and which Daily Maverick has seen, found that the AGU was lacking in several areas.

Read more in our Ipid Report on Police series:

The report stated: “Reinforced vehicles were needed. AGU members did not have the requisite skills, proper training or equipment to do the protection duties.”

This implied that the cars officially handed over to the AGU in November 2018 during the launch were more for publicity than for operational purposes.

Major-General Andre Lincoln, who retired at the end of October this year, was appointed to head the AGU.

The Ipid report said: “By his own admission, he [Lincoln] said when the unit was formed in 2018, he was just told he will be heading the unit, with no specific guidelines and specifications of how he should do it.”

This implied that Lincoln was tasked with steering a unit without a thorough plan to work from — a tough situation in a gang-saturated province — and very different from Ramaphosa’s publicly presented AGU.

In its report, Ipid found that former acting Western Cape police commissioner, Sindile Mfazi, should have dealt with the “shortcomings” of the AGU, including the lack of skills and reinforced vehicles.

Here’s where the situation takes on a more sinister tone.

Mfazi died in July this year. Police first said he died of Covid-19 complications, but later said they were in fact investigating the cause of his death after suspicions surfaced that he had been poisoned.

The AGU intrigue goes even deeper and fits into a much broader picture of police infighting and backstabbing.

Lincoln was one of four police officers who claimed that certain colleagues were conspiring against them.

In December 2018, Lt-Col Kinnear complained that a group of officers with links to Crime Intelligence were conspiring to frame him and colleagues including Lincoln and Jeremy Vearey, who was fired as Western Cape head of detectives in May this year (a move which he has challenged).

Peter Jacobs, the police’s Inspectorate head who was controversially transferred from Crime Intelligence earlier this year, had even described the officers Kinnear complained about as a “rogue” team.

Nothing came of this.

The Ipid investigation, however, found that a rogue unit had indeed operated in the Western Cape, adding credence to what Kinnear, Vearey and Jacobs had spoken about and adding weight to the claim that Lincoln was not given full support as the AGU head.

Ipid recommended that the AGU as well as Crime Intelligence, “which are key to National Security and Transnational or Organised Crime resolving”, should be properly resourced and capacitated.

Ipid also recommended the “Appointment/deployment and or secondment of suitably qualified persons who have the necessary experience and relevant skills that feed into the mandate or scope of the particular units.

“Vetting and lifestyle auditing should be mandatory to the appointment, secondment and deployment of any member to these specialised units.”

The Ipid report comes three years after the AGU’s launch, meaning the unit might well have been functioning all the while without proper resources and necessary skills.

At the time the unit was launched, and in the months after, several concerns were raised.

The then chair of the Portfolio Committee on Police, Francois Beukman, welcomed the AGU, but cautioned that it needed to be up to scratch if it hoped to tackle the gangs.

“Units such as this need to be capacitated effectively and efficiently to deliver on its mandate,” a statement at the time said.

“This includes human capacity, information technology assets and any other resource they need to function effectively.”

Dan Plato, who was Community Safety MEC at the time, had questioned whether the AGU was a specialised unit “or yet another fly-by-night gimmick”.

Daily Maverick previously reported that questions surfaced in Parliament about another Western Cape policing unit, the Major Offences Reaction Team (Mort), and whether it was in opposition to the AGU.

It was reported that former Western Cape police commissioner Khobinkosi Jula announced the establishment of the reaction team in September 2017. It began operating in early 2019 — when the AGU was in its infancy.

In June 2019, cracks began showing when six AGU members were wounded in an ambush in the Cape Town suburb of Samora Machel during an operation.

It emerged that Lincoln had not approved the operation. He subsequently requested that three AGU members — deployed to the unit by Jula and who apparently planned the operation — be removed due to a breakdown in trust

In mid-2019, civil activist Colin Arendse, a former police reservist from Cape Town, voiced concerns to national police commissioner General Khehla Sitole about the AGU, including that it had been operating without a budget since its inception.

“Interestingly, for the past four months, Mort has conveniently been operating with a budget of R1.1-million per month, despite no organisational design and work study being signed off by you,” Arendse wrote to Sitole.

“I also note, with extreme prejudice, General, that Mort was able to source this budget from you AFTER the launch of the Anti-Gang Unit by the President.”

At the time, Western Cape police spokesperson Andrè Traut said the operational functioning of the units was an internal issue.

Looking back, the launch of the Anti-Gang Unit in November 2018 seems to have been rushed. One reason could be that it was so badly needed. But if it was done primarily for political reasons and not to deal with crime, then many lives have been played with.

The concerns and claims about the AGU, when viewed in conjunction with Ipid’s findings and Kinnear’s assassination, paint an incredibly distressing picture of policing in the Western Cape.

Not only does it suggest that residents were duped into believing that something was being done to combat gang violence, but also that honest police officers have been sent to the frontlines of organised crime without vital equipment and training — thereby exposing them to immense danger. DM