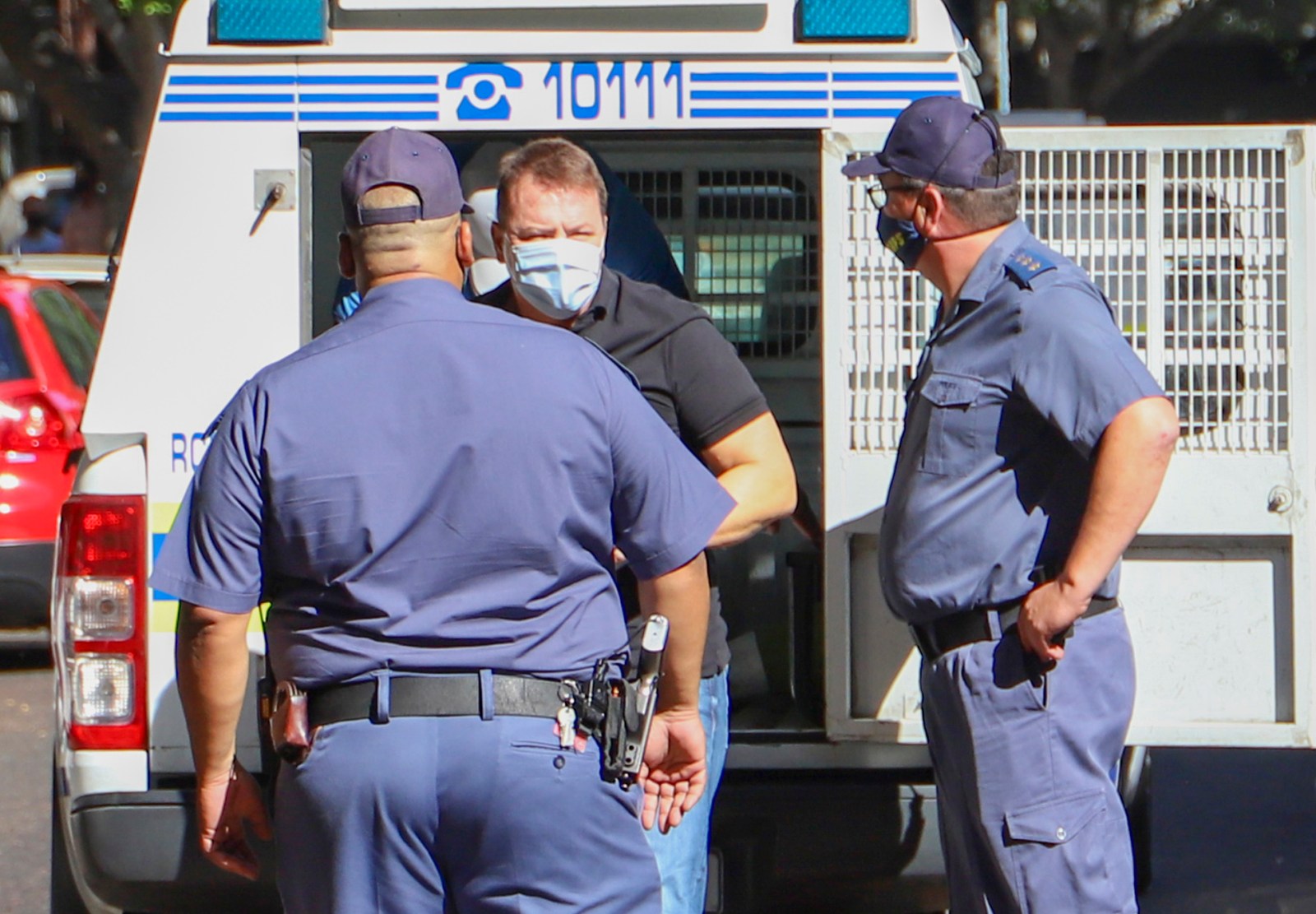 In December three suspects – one who has since been murdered – with alleged ties to the underworld were arrested in connection with an assassination in Cape Town in 2018. Now five more suspects, including a policeman previously entrusted with fighting gangsterism, have been charged with other crimes alongside them.

Details of how suspected Cape Town organised crime figures, including a policeman, allegedly colluded with one another are surfacing as the net tightens on the city’s underworld.

On Tuesday Mark Lifman and Jerome “Donkie” Booysen, who were arrested in December and released on bail, appeared again in the Cape Town Magistrates’ Court in connection with the 18 August 2017 murder of international steroid smuggler Brian Wainstein.

A third suspect who would have appeared with them – William “Red” Stevens, widely known as one of the Western Cape’s most seasoned 27s gang members – was killed in a shooting in Cape Town last Tuesday. (The case against him will be withdrawn once a death certificate is handed to the prosecution.)

It emerged on Tuesday, though, that the case against Lifman and Booysen had expanded considerably, with additional charges and the National Prosecuting Authority (NPA) confirming “that five more accused were added to the docket” in the State’s case involving Liftman and others.

The AGU has been in the news recently because one of its members, Lieutenant-Colonel Charl Kinnear, was assassinated outside his Bishop Lavis home in Cape Town on 18 September 2020.

He had been investigating several underworld crimes with suspected links to police officers when he was killed.

According to the provisional charge sheet in the case against Lifman and his co-accused, they face charges under the Prevention of Organised Crime Act.

They were all accused of contributing to a pattern of criminal activity and it was alleged they did so to benefit, at the direction of, or in association with, the 27s gang.

Lifman and Booysen were the only two suspects allegedly linked to Wainstein’s murder.

On top of this, Lifman was accused of incitement and conspiracy to commit murder, linked to around 19 November 2017, and targeting suspects including Nafiz Modack, Colin Booysen (who is Jerome Booysen’s brother), Carl Lackay, Ashley Fields, Emile Goodley and ex-Springbok rugby player James Dalton.

Lifman, William Stevens and Naude were also accused of conspiring to murder this same group a few days later – around 22 November 2017.

Dalton has previously had some brushes with the law.

Modack, Colin Booysen, Fields and Lackay (who was murdered in Cape Town in August 2018) were among five accused who were previously the focus of an extortion court case in which allegations arose that Lifman and his associates were rivals of Modack’s and that the two groupings were vying to control nightclub security in Cape Town. Modack and his co-accused were subsequently acquitted in the extortion matter.

In the bolstered Lifman-focused case, Farquharson and Henderson were accused of conspiring to defeat the administration of justice relating to happenings of over a period from roughly 9 April to 24 August 2017 in Sea Point and other areas of Cape Town.

It was further alleged that he had assisted a suspect, Matthew Breet, “by suggesting an exculpatory version which he was to give up if he was required to make a warning statement to the police on a charge of possession of unlicensed firearm and ammunition”.

Breet was previously arrested for Wainstein’s murder and entered into a plea deal with the State and was sentenced to 20 years in prison.

Henderson was also accused of “disposing of material evidence” by arranging it be handed back to Breet.

It was further alleged he had warned Breet’s brother, Sheldon Breet, who was also charged with Wainstein’s murder, and that the Hawks were looking to arrest Breet himself.

Via Henderson’s alleged actions, fingerprint evidence had been lost and Breet took measures to try and stay a step ahead of the Hawks.

Around August 2017 in the vicinity of Sea Point, Henderson also allegedly took R100,000 cash from either Farquarson and Breet, or both, “to diligently investigate” a Sea Point case “and collect and preserve evidence in the matter which could implicate Matthew Breet in the offence”.

Lifman, Booysen and both suspects with the surname Stevens were accused of – either on or around 29 March to 7 April 2017, in Bellville South, the same suburb where Jerome Booysen had a home and what is widely known as Sexy Boys gang territory — unlawfully conspiring to have an offence committed in relation to public violence.

Booysen, William Stevens, Naude, Farquharson and Norman were also accused of conspiring to commit public violence on or around 8 April 2017 near Cape Town’s V&A Waterfront.

The group of suspects, who have been released on bail, are expected back in the Cape Town Magistrates’ Court in May.

When Modack was previously accused of extortion, it was heard during related court proceedings that he had claimed that Kinnear and another senior police officer in Cape Town, Jeremy Vearey, were on Lifman and Jerome Booysen’s payroll.

Meanwhile, in a December 2018 complaint to his bosses, Kinnear had made a wide range of claims about certain police officers in Cape Town with links to Crime Intelligence, including that at least one was aligned to Modack. DM