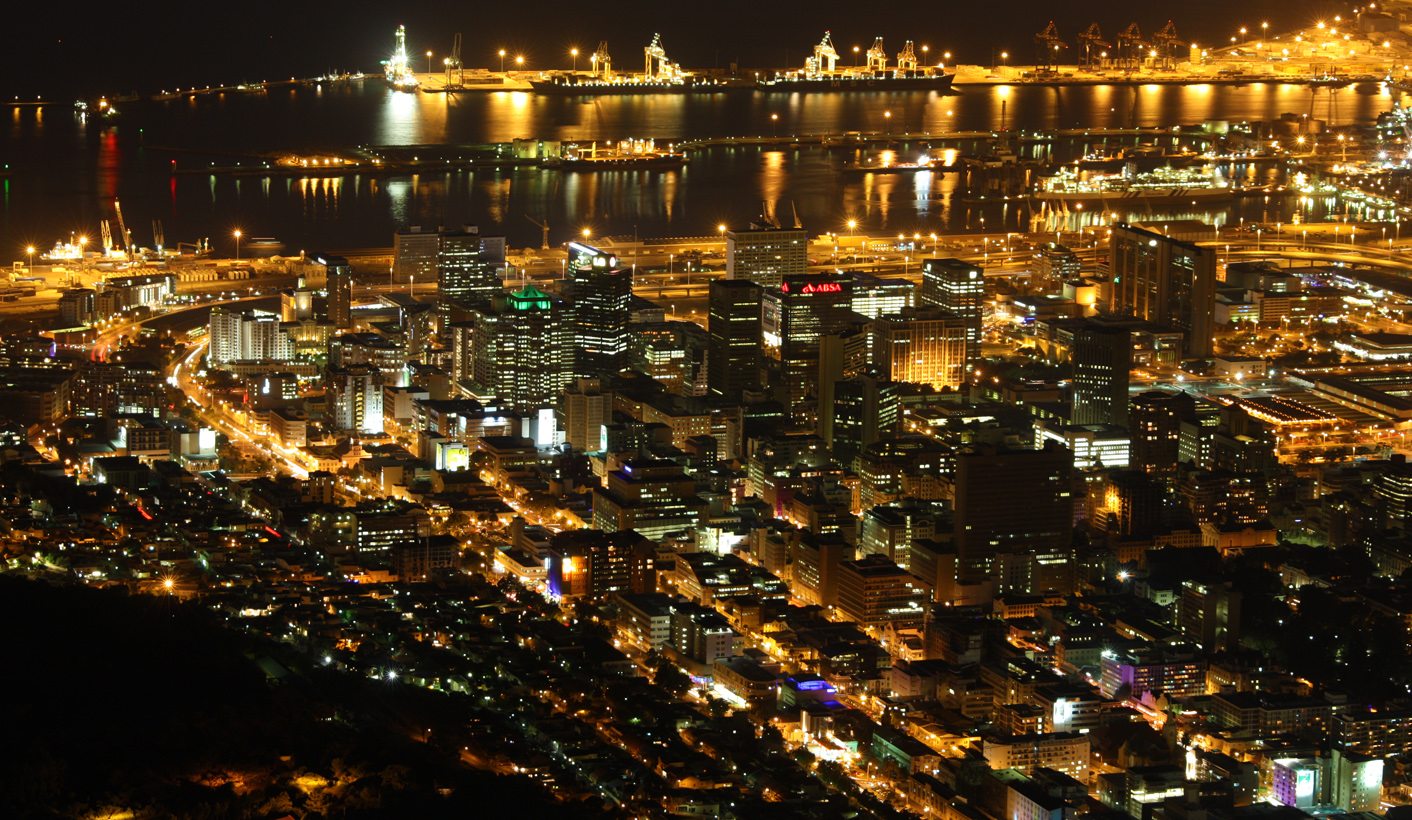 Tourists and visitors to Cape Town as well as the city’s well-heeled residents who enjoy dining and dancing at some of the city’s high-end restaurants and nightclubs may believe they are immune to the endemic gang warfare that blights the lives of the city’s working classes. But the recent appearance of five alleged Cape underworld figures in what promises to be the most significant trial exposing the entrails of organised crime in the region has not only implicated high-ranking police officers, revealing the state’s links to the criminal economy, but also made visible just how intimate the under- and upper-worlds are. By MARIANNE THAMM.

Court 16, housed on the ground floor of the grandiosely shabby Cape Town Magistrate’s Court building in the CBD, is where the city’s criminal flotsam first wash up for bail hearings or postponements. The accused here are overwhelmingly young, black men – lean, untidy, mute, impoverished.

Which is why the pair of Gucci loafers that East European-born, Cape Town-based businessman, Nafiz Modack, wore in the dock on Thursday 11 January were so strikingly out of place. Just a few minutes earlier a man had stood on the same spot wearing filthy, cracked, laceless sneakers only to be informed that his case had been postponed before he was led back to the dank court cells below.

Modack and four other men, Colin Booysen (brother of gang boss Jerome Booysen), Jacques Cronje, Ashley Fields and Carl Lakay, have been in custody since 15 December 2017 after their arrest on charges of extortion and racketeering and as part of an ongoing investigation by the Operation Combat anti-gang unit (headed by Major-General Jeremy Veary).

Two other men, Matthys Visser (believed to be Modack’s bodyguard) and James de Jager, who were arrested along with the alleged kingpins, were granted bail on 27 December.

So far, sensational information has emerged in the bail hearing of the four men as the head of Sea Point detectives, Colonel Charl Kinnear, who is opposing bail, sketched for the court a classic, violent turf war between rival security groupings in the city and which has resulted in the shooting of three patrons (one fatally) at Cafe Caprice in Camps Bay, a doorman at a bar, a hotel manager as well as the murder of attorney Noorudien Hassan – linked to high-profile gang arrests in the province – outside his Landsdowne home in 2016.

Jerome Booysen has been targeted thrice, most recently at Cape Town International airport in October 2017 where he was shot four times as he arrived at the airport’s drop and go section. He survived.

One group seeking control of the city’s nightlife, restaurant and entertainment economy is headed by Modack and Colin Booysen and the other by “businessman” Mark Lifman (photographed in 2014 alongside President Jacob Zuma and axed ANC Western Cape Chair Marius Fransman at Zuma’s birthday celebrations in Cape Town) and Sexy Boys Gang boss, Jerome “Donkie” Booysen.

Both Modack and Lifman have found themselves caught in a SARS net with regard to their taxes although Lifman seems to have remarkable luck when it comes to staying out of jail. Investigative journalist Jacques Pauw, in The President’s Keepers – Those Keeping Zuma in Power and out of Prison, sketches how Lifman was acquitted in 2009 of indecently assaulting under-age boys as well as attempting to murder their pimp.

“As so often in the past, it was left to SARS to bring Lifman down. They ultimately presented him with a tax bill of R388-million at the beginning of 2015,” writes Pauw. However, in the same year, SARS commissioner Tom Moyane had been approached to go easy on Lifman because of his political connections.

And so Lifman operates in Cape Town with nary an apparent care in the world. So much so that some good citizens continue to do business with him.

The fact that it never ends well for the big cheeses, as security strongman Cyril Beeka found out in 2011 when he was murdered in a hit, seems to matter little. Mark Lifman quickly muscled in on Beeka’s turf. Now Lifman finds himself having to defend it.

It has taken time, patience and co-operation between clean cops, members of the Hawks, the South African Revenue Service as well as the local media, most notably News24 investigative journalist Caryn Dolley (who has also been threatened), to get to this critical point in stopping the violent racketeering and extortion ring.

The night-time economy in Cape Town (as well as Johannesburg and other cities) has long been a source of easy revenue for a variety of thugs and bottom feeders in the “bouncer” and “security” industry over the years.

As in Naples, Italy and other big cities around the globe, this Mafia thrives because it co-opts law enforcement agencies and threatens business owners who are too afraid to resist or fight back.

The only way this extortion and violence will stop, one senior source close to the investigation told Daily Maverick, is if patrons begin to boycott those venues which pay protection money and who refuse to co-operate with police. These businesses, said the source, should also be exposed and named, to alert law-abiding citizens and tourists who might find their lives shortened before they order coffee and dessert.

Criminologist Mark Shaw, in his explosive Hitmen For Hire – Exposing the South African Underworld (Jonathan Ball) and published in 2017, describes these extortionists of the night-time economy as “entrepreneurs of violence”, people who seek opportunities “for violence to be bought and sold”.

The problem is that the longer authorities allow this Mafia to run the show, the bigger the network grows, and the more brazenly it threatens violently to disturb the apparent harmony of the so-called formal economy. This could have serious consequences for economic growth, especially tourism, in the region.

At the bail hearing in Court 16, Colonel Kinnear told Magistrate Joe Magele how, after De Jager and Visser were released on 27 December, they had simply continued business as usual and had tried to collect money from establishments.

Kinnear also set out how Modack, Lakay, Cronje and Booysen had taken over the hugely popular Granger Bay beachfront venue The Grand, in Cape Town. According to Kinnear, the owners of the Grand, the Harbour House Group, were so locked into the “deal” that their operations manager, Stuart Bailey, would often source funds from other restaurants in the group to pay the protection racket.

In that regard the cost of meals, drinks or entertainment at The Grand is marked up to feed the criminal economy. In that sense law-abiding citizens too become complicit.

Most sensationally, the court heard that Modack had boasted (a brag caught on tape) that he was working with two of the most senior SAPS officers in the region, deputy provincial commissioner of detectives, Major-General Patrick Mbotho, as well as the province’s head of Criminal Intelligence, Major-General Mzwandile Tiyo (who is said to be a close Zuma ally). These senior officers, said Modack, were offering him protection.

Last year Mbotho, who oversees the SAPS Family Child Protection Services (while the brilliant Brigadier Sonja Harri has been sidelined), apologised for posting pornographic messages in a police WhatsApp group. Mbotho was appointed by now suspended acting National Police Commissioner Kgomotso Phahlane and it was he who demoted Major-General Veary, a move the labour court has subsequently ruled illegal.

Kinnear also told the court that Modack, at a meeting at the One&Only hotel in Cape Town, had also boasted that he had Northern Cape police commissioner Risimati Shivuri in his pocket.

Last week a photograph of President Jacob Zuma’s son, Duduzane, meeting with Modack in Cape Town in October 2017 surfaced. In September Modack acknowledged that he was acquainted with Duduzane and “looked after him” when he visited Cape Town. In that interview Modack said his business interests also extended to debt collection.

Colonel Kinnear detailed in court how Modack had recorded his telephone discussions including allegedly one with Serbian, George Darmanovich, one of Pauw’s sources for his book The President’s Keepers.

The bail hearing was set down for two days last week but was postponed until Tuesday as Kinnear had been booked off sick.

Veary, who was responsible for leading an investigation into the sale of police guns to Cape Flats gangsters, has been relentless in his pursuit of gangsters and their cohorts who are attempting to capture the city’s economy.

And, while Veary won his labour court battle with regard to his demotion by Phahlane, it is worth noting that this highly effective officer has not been reinstated in his position.

It is still occupied at present by Mbotho.

There is no doubt that there will be a concerted attempt at smearing Major-General Veary, but the seasoned law enforcement veteran is more than ready to face down the gangsters he has been investigating with fellow officers.

As Shaw writes in Hitmen for Hire, the Cape Town protection racket relies on a “supply chain of violence commissioned from the gangs on the city’s periphery and applied in their city-centre operations”.

Cyril Beeka is the man credited with this “innovation”, this facilitating of the intersection between the criminal underworld and the apparent carefree touristy nightlife so many enjoy in Cape Town without ever making the connection.

Expect more fireworks and sensational disclosures as the bail hearing has been set down to resume on Tuesday and Wednesday. Modack and his fellow accused have been overnighting in Pollsmoor prison in the meantime. Mark Lifman has been enjoying summer in the Cape. DM