Western Cape: Brigadier Sonja Harri helped thousands of victims. Now she is a victim herself – of Politics & Backstabbing 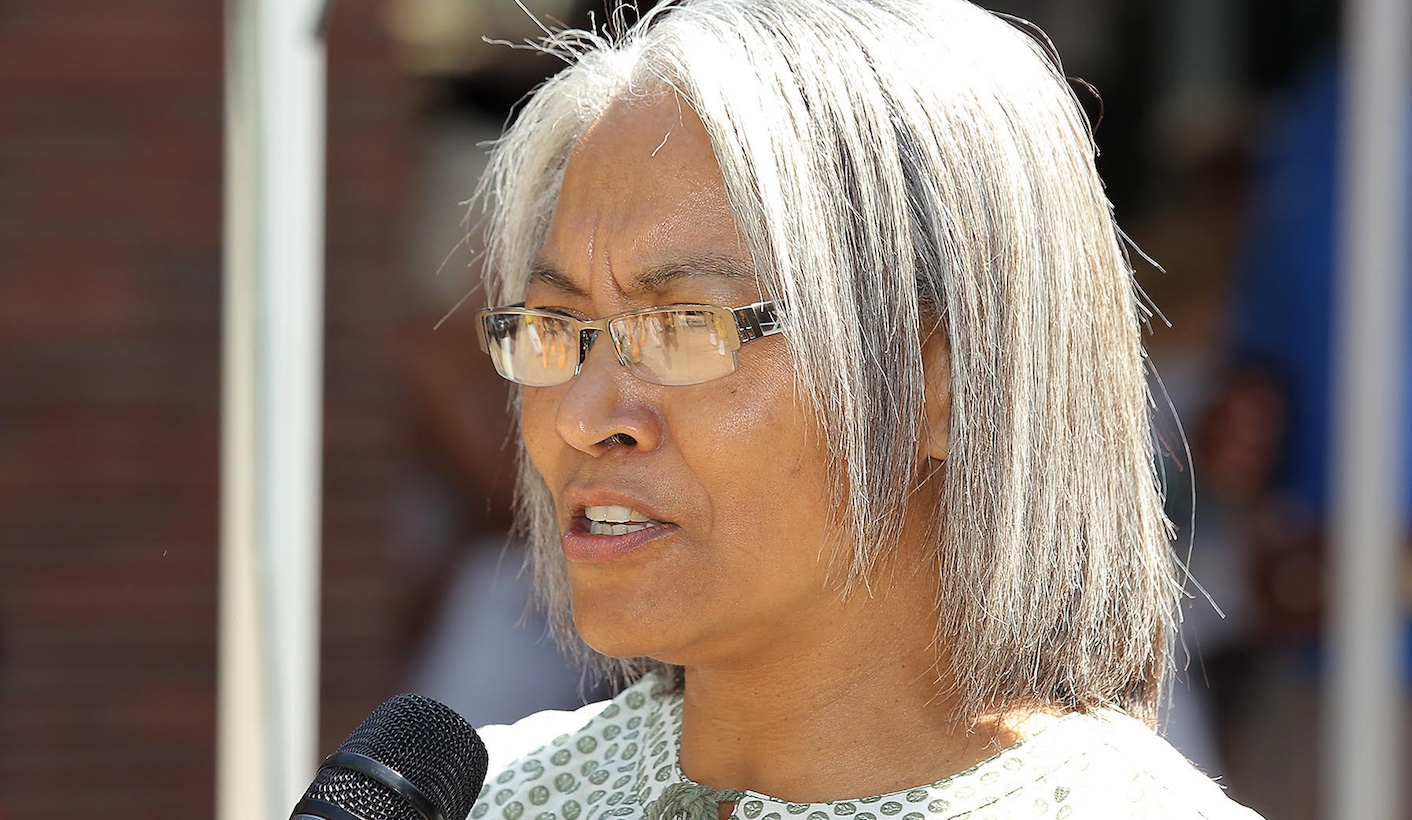 Head of the Western Cape Family Violence, Child Protection and Sexual Offences unit Brigadier Sonja Harri, who has over 30 years’ experience and has been instrumental in helping to solve a myriad high-profile cases including the brutal murder and rape of Anene Booysen, has been languishing at home for eight months while she faces questionable charges of misconduct. Meanwhile, the region’s deputy provincial commissioner of detectives, Major-General Patrick Mbotho, who exercises command and oversight of this crucial unit, allegedly posted pornographic messages onto an official police WhatsApp group in July. He’s still at work. By MARIANNE THAMM.

It is virtually impossible to hold on to all the names of the victims – a vast number of them children – who have been raped and murdered in South Africa. The malevolent tide seems relentless and unstoppable. Each day another headline trumpeting another horror – a toddler and her mother found here, raped and suffocated, only their heads buried in the sand, there another child dumped in a communal toilet.

Some of the names of these girls, these children, continue to echo because of the savagery of the injuries inflicted and the shock of it all at the time. Anene Booysen, 17, raped, disembowelled, her neck and abdomen sliced open, her fingers and legs broken, in Bredasdorp in 2013.

In May this year Courtney Pieters, three years old, poisoned, raped, every bone in her body broken so that she could be stuffed into a shopping bag and buried in a shallow grave near her home.

It is ordinary police officers as well as those attached to the Family Violence, Child Protection and Sexual Offences (FCS) units who have to deal daily with the horror of these assaults, rapes and murders. It is they who must face the broken, bloodied bodies, collect the evidence, find the perpetrators, build a solid case. It is also they who are first in the line when those victims who survive seek help.

Brigadier Sonja Harri, who was appointed to head the Western Cape’s Family Violence, Child Protection and Sexual Offence unit in 2010, is regarded as an inspiration to those who work under her as well as those NGOs which attempt to render assistance to the under-resourced and over-worked units. The Western Cape’s FCS is, in many ways, a flagship unit. It is one of the best performers in the country, even when short-staffed.

In 2014, while testifying at the Khayelitsha Commission of Inquiry, Brigadier Harri could not conceal the collateral damage caused by the job when she broke down on three occasions while giving testimony. At the time Harri had headed up several disturbing investigations including into a serial rapist in Khayelitsha, the Anene Booysen rape and murder as well as many other child murder and rape cases.

But Sonja Harri has been sitting at home for at least six months pending a misconduct hearing on what some claim are spurious and malicious charges, one of which, Daily Maverick has learnt, has to do with Harri’s absence from a meeting (which she had been specifically asked not to attend).

Harri’s leadership, say those who have worked with her, is sorely missed, particularly in a province plagued with horrendously high levels of assault, sexual assault, child rape, rape and murder.

“I have got messages from members of the FCS officers across the province who regard Sonja Harri as their mother. There is such loyalty towards her. She is such a diligent and inspiring officer,” Monique Strydom, founder of the NGO Matla a Bana, which deals with child abuse, told Daily Maverick.

“We have found Brigadier Harri to be a very trustworthy and supportive person. In our experience of working with her she has proved that she understands the importance of collaborating with NGOs and she has always been available to assist with child protection cases and queries. We found her to be a valuable asset to the police in addressing child abuse,” Strydom said.

She added that she was extremely concerned about the impact on the morale and the operations of the FCS units in the Western Cape because of the charges Harri was facing. It appears as if charges have been deliberately allowed to pile up in the hope that at least one will stick and Harri can be sidelined.

Delivering his Budget Vote speech on the SAPS in the National Assembly in May this year, the ANC’s Leonard Ramatlakane specifically mentioned the shoddy police work in the Courtney Pieters murder and highlighted that the province’s FCS unit should have dealt with the case in the first place.

Police who had arrived at Courtney’s home in Elsies River after she had been reported missing in May this year had failed to search the bedroom of the suspect, who lodged at the house, where her body might have been kept.

“It is very, very disappointing that in the Western Cape the Head of the FCS unit, Brigadier Harri, is being victimised by the provincial management. This must stop as it weakens the resolve of the SAPS to deliver such services to the public. We cannot afford the experience of such good detectives to be wasted by ill-sighted provincial managers,” warned Ramatlakane.

Harri has been out of action since December when the charges were first brought against her. Those close to her say the threat of the investigation has taken its toll on her health and that she is keen to return to work.

And then, a month before Women’s Day, the man who is Harri’s commander and who is responsible for the oversight of all of the FCS units in the province, deputy provincial commissioner of detectives, Major-General Patrick Mbotho, on 13 July posted two pornographic messages from his official cellphone to a WhatsApp group of detective commanders in the province.

Mbotho was appointed by the now suspended acting National Commissioner Kgomotso Phahlane to replace Major-General Jeremy Veary, who a labour court ruled this month had been illegally sidelined.

In his WhatsApp Mbotho sent “graphic sexual messages” and a video of a man and woman having sex. Mbotho later asked his colleagues to delete the message.

Daily Maverick sent a list of questions to the offices of the acting National Commissioner, Lieutenant-General Lesetja Mothiba, as well as Minister of Police, Fikile Mbalula, about the alleged charges against Brigadier Harri as well as what action would be taken with regard to Mbotho’s spreading of pornography.

Colonel Athlenda Mathe, National SAPS spokeswoman, replied to Daily Maverick that, “Matters relating to the suspension of officials and/or disciplinary procedures are internal matters that are between an employer and employee. Having said this, the South African Police Service will not discuss this matter in the media space.”

Strydom said that she had noted “with concern” that there were a number of issues and instances that currently affected the operations and success of the FCS units in the Western Cape. She has written to the acting National Commissioner raising some of these concerns including Mbotho’s alleged pornographic posting.

“The recent sex scandal widely publicised in the media has resulted in some of our major sponsors raising their concerns with us about the credibility and ability of this high ranking police officer who has been appointed to protect and look after women and children,” wrote Strydom.

She said she was also concerned about reports that the FCS units in the Western Cape were experiencing “extreme staff and logistical resource shortages” and that an investigation had also indicated that morale was low, particularly as a result of the “loss of a very effective provincial co-ordinator, Brigadier Harri.”

Strydom also noted that FCS staff had experienced verbal attacks by “a senior general” and that the “lack of respect and support they are experiencing has resulted in burn-out because of heavy load and staff resigning”.

She said staff were being rotated in order to cope with the extreme load. She also highlighted that there is only one Xhosa-speaking forensic social worker in the entire Western Cape. The social worker is based in Oudtshoorn.

“A Xhosa-speaking child who needs assistance will have to travel at least three hours from Cape Town to be assisted by her. This is not only extending the trauma of that child and reducing the successes of a successful conviction due to victim trauma, but also uses valuable resources like vehicles and time (as it is expected of the investigating officer to take the child),” Strydom wrote to Mothiba.

She said her organisation had also received a complaint that medical professionals had been turned away from two police stations when wanting to report sexual abuse.

“It took serious intervention from my office to try to assist them (and the child) effectively. For years we have been telling the public to report crimes and we have been training medical practitioners in how to deal with sexual assault of minors. We are therefore greatly concerned if the reporting process fails at a police station level.”

With regard to Brigadier Harri, Strydom wrote, “I would also like to put it on record that we are aware of the investigation of misconduct against Brigadier Sonja Harri. We do not have the details of the allegations but would like to offer our testimony to her character as we experienced in years of dealing with her office. It would be a tragedy to lose such a dedicated person. We are prepared to serve as a character witness in the above regard.”

Halfway through Women’s Month and the real horror of the lie of the land is as evident to ordinary citizens as it is the other 11 months of the year when women and children continue to suffer the brunt of endemic and systemic violence.

That an exemplary officer of the calibre of Brigadier Harri can be sidelined and an “investigation” conducted away from the public eye puts paid to all the pompous platitudes that have so easily rolled off the tongues of Cabinet ministers this Women’s Month.

Ramatlakane reminded MPs in May that the SAPS Budget Vote “comes at a critical time in the country as we see the levels of violence against women and children increase against our expectation. The development of such violence must be stopped wherever it emerges and we must call on all men in the country to support the efforts of the police to put an end to this abuse, rape and killing of women and children.”

He said that the “mission of the SAPS is inextricably tied up with the mission of the African National Congress which sees policing as a public service to the people of our country. The SAPS is the body that guarantees the safety of our people to enjoy Freedom and Democracy. Let me make the point that the SAPS upholds the Constitution, ensures that the wheels of our democracy does not come off.”

Let’s hold him to it. Happy Women’s Month, everybody. DM