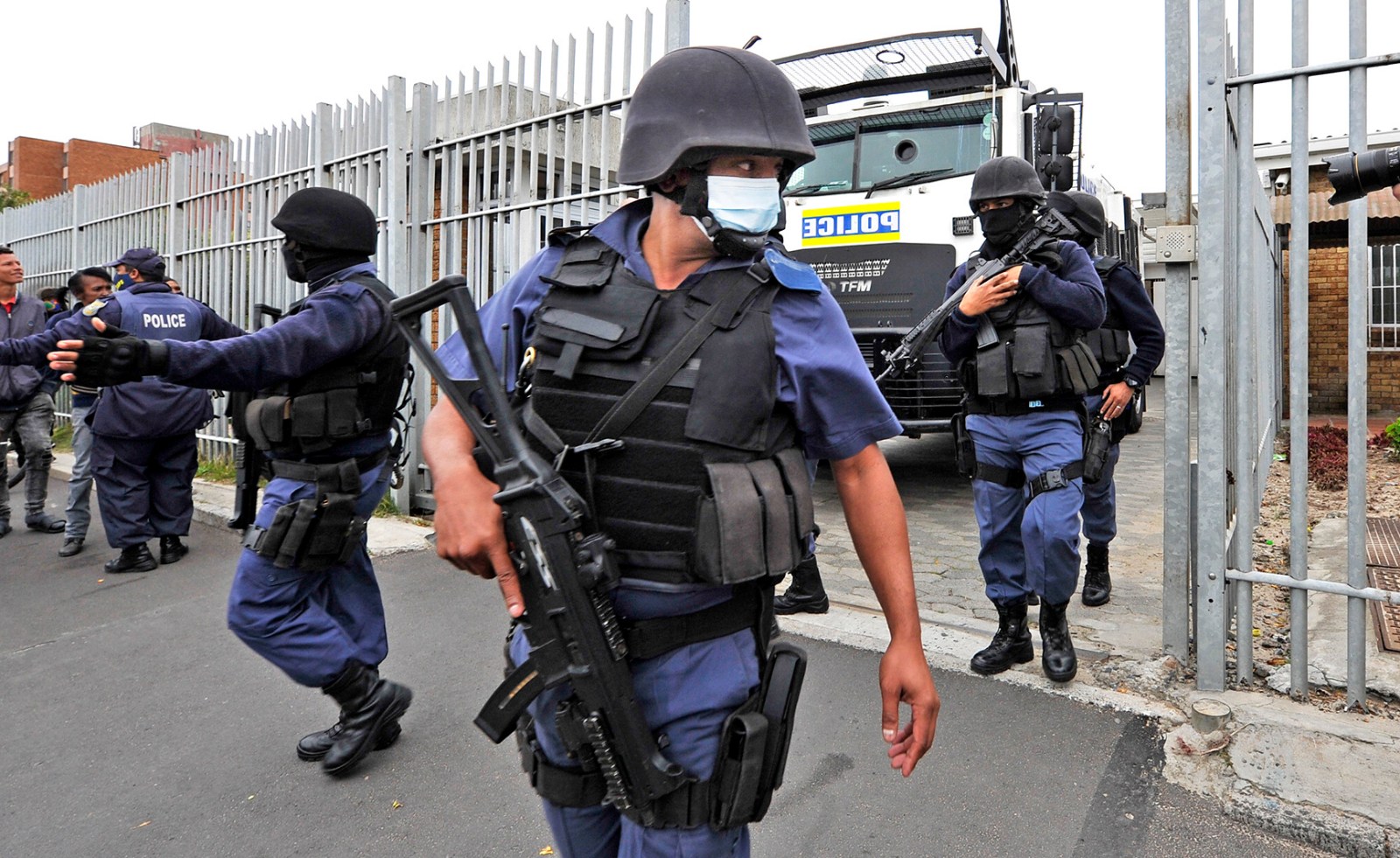 Zane Killian, accused of playing a part in the Charl Kinnear murder, is taken from the Bishop Lavis Magistrates’ Court on Wednesday in a police Nyala. (Photo: Noor Slamdien)

The heightened security at the court on 14 October is evidence that the State is determined to keep former pro rugby player Zane Killian alive. He is the only suspect arrested so far for the 18 September hit on Lieutenant-Colonel Charl Kinnear.

Killian is accused of being part of the assassination plot and is the State’s trump card in the investigation. Killian has claimed that a man known as Mohamed employed him to track what he thought at the time was Mohamed’s wife’s phone.

Killian said he had not been aware that he was tracking Kinnear’s phone. He “pinged” Kinnear’s phone more than 2,116 times, right up until the policeman’s murder at 3pm on Friday 18 September. The tracking continued for about 25 minutes after Kinnear was gunned down outside his Bishop Lavis home by an unidentified man.

Kinnear’s widow, Nicolette, says Killian is a vital element in the investigation and she is pinning her hopes on investigators getting answers that will lead to the arrests of those who conspired to kill her husband.

At the time of Kinnear’s death, the decorated detective had been investigating police corruption and the involvement of SAPS members in an illicit gun-running racket.

The officers he was investigating are said to have been colluding with alleged underworld boss Nafiz Modack. Twenty police officers have been implicated. They were arrested along with Modack and later released on bail.

On the weekend of 10 October, a special investigation team instructed by police minister Bheki Cele to spearhead the probe was handed all the information that has been gathered by the Hawks since the murder.

Maverick Citizen spoke to several top criminal lawyers about the possibility of Killian himself being targeted in a hit, and what impact this would have on the State’s case.

“The State doesn’t need to prove that Killian’s evidence is reliable. Important to the prosecution is that the evidence gathered and used against Killian was obtained lawfully. Reports by cellphone experts giving an analysis of his phone and his computer hard drive, showing what type of tracking system he used, remains pivotal in this matter.”

At this stage, the case will be based on electronic evidence which will be used to demonstrate Killian’s link to the plot. In essence, the prosecution’s case does not rely on what Killian says, but what the tracking and electronic evidence revealed.

Legal experts also suggested that should Killian be unable to testify, the prosecution would argue the reason for this could only have been to prevent further damning allegations of police corruption from coming to the fore.

The murder of Kinnear, as Cele said at the officer’s funeral, was linked to his work investigating corrupt cops.

This trial will not only be about the assassination of Kinnear, but will provide police management and the country with some sense of the scale of police corruption.

On Wednesday 14 October, Killian briefly appeared in the Bishop Lavis Magistrates’ Court on charges of murder, attempted murder and the illegal interception of telecommunications.

His bail application has been set down for 26, 27 and 30 October and will be heard in the Bellville Regional Court.

National Prosecuting Authority regional spokesperson Eric Ntabazalila confirmed that the case had been transferred after concerns were raised over security at the Bishop Lavis Magistrates’ Court.

Meanwhile, allegations have surfaced that Killian was not a registered private investigator and that documents handed in by his counsel were merely grades he needed in order to apply for registration in terms of the Private Security Industry Regulation Act.

If this is true, then Killian, in terms of the regulations, unlawfully rendered a security service while unregistered.