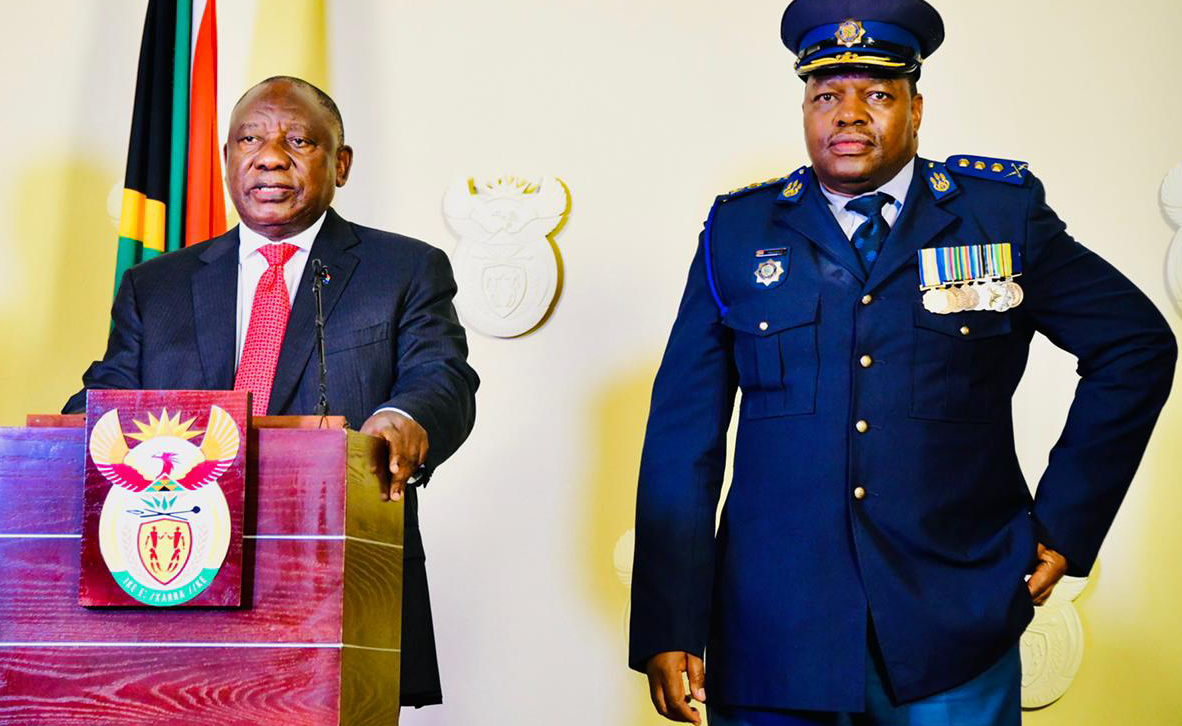 Lieutenant-General Sehlahle Fannie Masemola is South Africa’s new national police commissioner and, according to President Cyril Ramaphosa, now has “the weight of the nation’s expectation” on his shoulders.

Ramaphosa told Masemola that this weight would “be matched only by the weight of the support government will place at the disposal of the commissioner”.

In welcoming Masemola, reportedly a former head of the police’s VIP Protection Unit, to the role on Thursday, Ramaphosa referred to several strengths he had displayed in his career.

“General Masemola has been a deputy police commissioner with an outstanding record of achievements in policing across South Africa. This includes helping with the de-escalation of violence in KwaZulu-Natal after our first democratic elections in 1994,” Ramaphosa said.

“[He] also brings to this position his experience in drastically reducing cash-in-transit crimes in the period around 2016. General Masemola played a leading role in coordinating security for all elections since and including 1994.”

Masemola was also pivotal in securing “major national and international events in our country, including United Nations summits, climate conferences and the 2010 Fifa World Cup”.

Ramaphosa said the process of appointing Masemola had involved a selection panel. Among those on the panel were democratic South Africa’s first national police commissioner, George Fivaz, and Police Minister Bheki Cele.

Five candidates had been shortlisted for the job.

Issues the panel focused on included the candidates’ “strategic capability”, “problem-solving” and, perhaps most important, given the state of the SA Police Service (SAPS) and the clouds under which many former national commissioners have left, “integrity and honesty”.

Ramaphosa said: “A stable, capable and capacitated South African Police Service is our surest guarantee that our constitutional rights will not be violated by criminals.”

He said more steps would be taken “to restore stability to all our security structures” – this would include filling vacancies at the State Security Agency and Crime Intelligence unit.

There are some question marks hanging over Masemola.

Back in 2012, The Star reported that it “understands that the acting divisional commissioner of crime intelligence, Fannie Masemola, went on a spending spree, acquiring 140 luxury vehicles, among them BMW X3s, Audi Q5s, the latest Jeep SRTs and the latest BMW 320 models”.

This does not appear to have stuck to Masemola and fits into a broader, murky arena of smear campaigns – and legitimate accusations – among officers, which have come to be a key characteristic of the SAPS.

Masemola takes over a service bogged down by heavy baggage.

Some of the uphill work he faces, aside from tackling crime, includes:

It emerged in February that Sitole was standing down from the national commissioner position ahead of schedule. Ramaphosa said this was “in the best interest of the country”.

See the statement released by Masemola on Friday, April 1, 2022 here:

During his State of the Nation Address in February, Ramaphosa explained that South Africa’s security sector was in for a shake-up and leadership changes were on the cards.

Earlier in the month, the Presidency released a report into the July 2021 riots, which erupted after Zuma was jailed.

During his subsequent address to the country, Ramaphosa said: “The report paints a deeply disturbing picture of the capabilities of our security services and the structures that exist to coordinate their work.”

The report concluded “that government’s initial handling of the July 2021 events was inept, police operational planning was poor, there was poor coordination between the state security and intelligence services, and police are not always embedded in the communities they serve”.

Last year, Ramaphosa served Sitole a notice of suspension and in October Sitole filed papers with the President providing reasons he should not be suspended.

Sitole’s possible suspension related to withholding information about Crime Intelligence’s allegedly unlawful attempted procurement of a surveillance device known as a Grabber for the heavily inflated price of R45-million (the regular price was R7-million) before the ANC’s elective conference at Nasrec in 2017.

Sitole was appointed national police commissioner at the tail-end of Zuma’s presidency in November 2017. At the time of his appointment, Zuma had glowing words for him.

Zuma said: “His extensive experience in the police service will assist him to execute this critical task of making South Africans and everyone in the country safer and to feel safer. We wish General Sitole all of the best as he assumes his new position at the helm of a very important institution in government and the country.”

The replacement of Sitole as police boss is another step away from Zuma’s presidency and legacy which are now synonymous with State Capture.

His optimism about the new police boss is vastly different from how he viewed Sitole because it previously became apparent that he did not see eye to eye with Sitole.

Of Masemola’s appointment, Cele’s office said: “It is optimistic that this shift in the [SAPS] top management will not derail the efforts in place to build on an efficient and trustworthy police service that is accessible to all South Africans and is unapologetic about fighting crime.

“The ministry is hopeful this appointment, which marks a new chapter in the life of the [SAPS], will further strengthen the existing efforts within the police service to safeguard South Africans and all those who live within our borders along with their property.

“By all accounts, General Masemola is an experienced professional police officer who has served in the ranks in various leadership and management capacities – at both provincial and national level.

“Our fight against crime requires stable and competent police leadership, and we trust that the new national police commissioner has the capacity to bring that. Building a credible police service that is responsive and trusted by communities across our country is a mammoth task.”

The DA, though, was much less optimistic about Masemola’s appointment and pointed to the appointment process and Cele as underpinning why it felt this.

Its shadow minister of police, Andrew Whitfield, pointed out that Cele, as well as Basic Education Minister Angie Motshekga, had been on the panel that helped select the new top cop.

This, Whitfield said, combined with “the secrecy surrounding the appointment process, does little to engender faith that Lt-Gen Masemola is not simply another deployed cadre”.

He said Ramaphosa had “wasted an opportunity to build trust in the police service at the outset by taking the public into his confidence” via a transparent appointment process.

“Lt -Gen Masemola’s key test will be his ability to stand up to Minister Cele’s bullying and efforts to micromanage the operational affairs of the SAPS. The commissioner will have to prove to South Africans that he is independent and not merely Minister Cele’s puppet,” Whitfield said.

“This will mean difficult and brave decisions that effectively combat corruption and crime, and also keep Cele from his dream of being both minister and commissioner.” DM