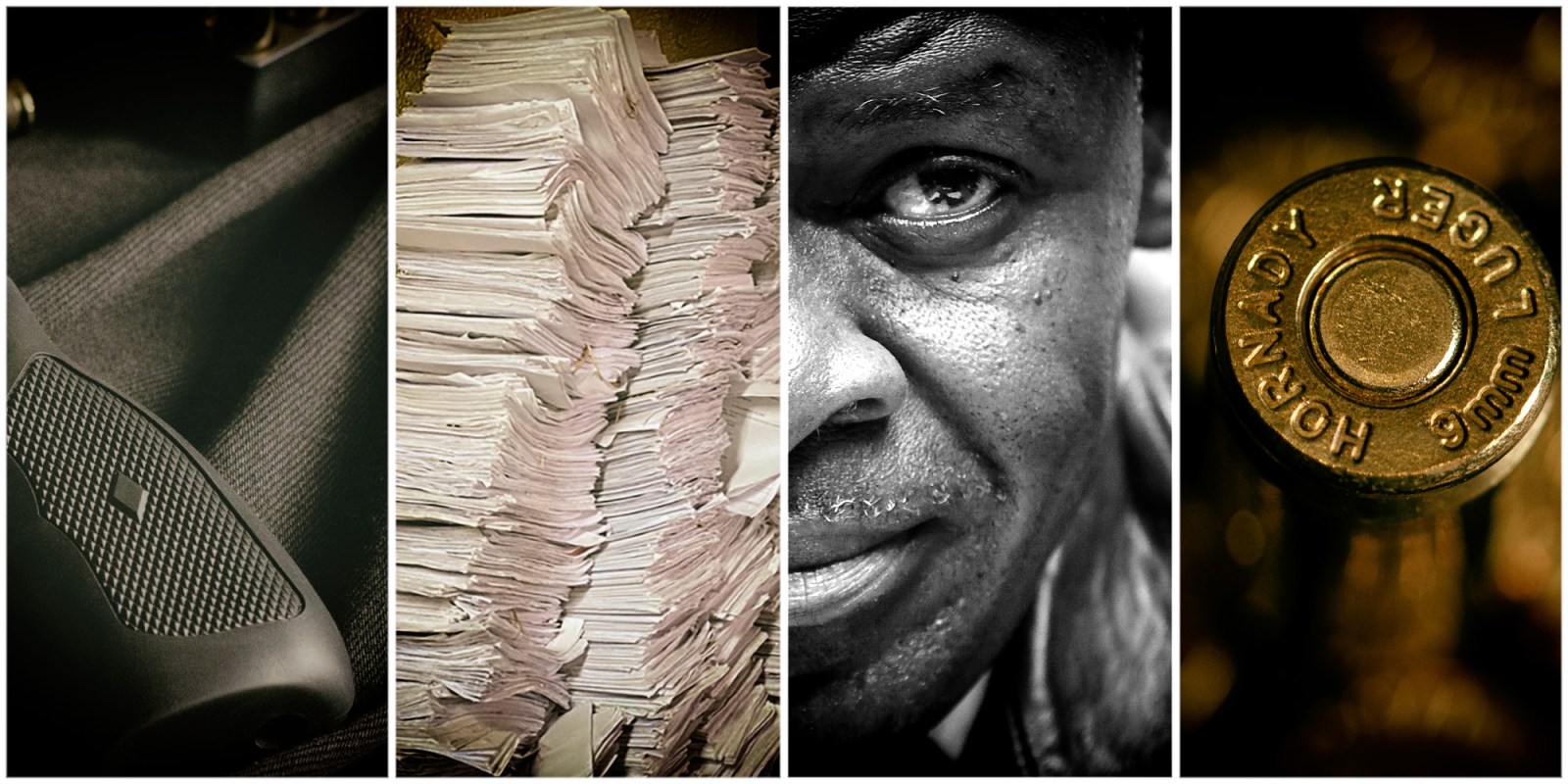 From left: (Photo: Unsplash / Thomas Def) | MPs on a 2021 inspection visit to the Central Firearm Register in Tshwane found ‘piles of documents stored in the corridors and various rooms’ and that ‘the weight of the paper further compromises the already compromised structural integrity’ of the building. (Photo: Twitter / Peter Groenewald) | National police commissioner Gen. Khehla Sitole during a media briefing after releasing the 2018/2019 South Africa crime statistics to Parliament's police portfolio committee on September 12, 2019 in Cape Town, South Africa. (Photo: Gallo Images/Netwerk24/Jaco Marais)

The cops’ Central Firearm Register is in the ‘collapsing’ Veritas building in Tshwane. This is ironic because translated from Latin, ‘veritas’ means truth but corruption claims tail the firearm register. The building’s perilous state also seems to reflect the true state of the South African Police Service.

In May 2021, members of Parliament, on a visit to the building housing the police’s Central Firearm Register (CFR), were taken aback.

There were “piles of documents stored in the corridors and various rooms” and “the weight of the paper further compromises the already compromised structural integrity” of the building.

According to the police’s 2020/2021 annual report, it is also meant “to regulate and ensure effective control over small arms and light weapons, within and across the borders of the Republic.”

But what the May 2021 visitors saw was at odds with these descriptions.

A parliamentary report on that oversight visit said: “The SAPS explained that the Veritas building had been disqualified for human occupation about two years prior.

“Various Safety, Health and Environment Unit reports noted that the building is structurally unsafe. Despite these deficiencies, the Department of Public Works and Infrastructure continued to renew the lease, thus forcing the SAPS to remain in the building to avoid expenditure irregularities.”

One of the recommendations to arise from the visit was that: “The SAPS must conduct an investigation into possible corruption associated with the continued renewal of the Veritas lease despite the building being declared unfit for occupation.”

It emerged last week that South Africa’s police boss Khehla Sitole, the subject of investigations for allegedly not assisting the Independent Police Investigative Directorate in certain cases, agreed to vacate the position at the end of March.

In the same week this major announcement was made, dire details about the CFR also surfaced.

Most of the unit is still located in the Veritas building, meaning police officers who go into work there potentially risk their lives.

This is in addition to threats they face because of the nature of what they do.

Daily Maverick has previously detailed how deep-rooted and broad the problem of firearms being smuggled via SAPS members is, making policing extra dangerous to honest cops who may be investigating corrupt colleagues.

A case in point is the September 2020 assassination of Lieutenant-Colonel Charl Kinnear, a Western Cape officer who was investigating colleagues in Gauteng for allegedly creating fraudulent firearm licences.

Back to the CFR

On Wednesday, 23 February 2022, the Veritas building and CFR situation was again discussed in Parliament.

A presentation on the CFR to the portfolio committee on police said: “The CFR was supposed to relocate, from the Veritas building to Telkom Towers: Annex building, on 30 October 2021. However, due to identified challenges, in terms of the condition of the infrastructure, storage facilities and additional repairs and renovations, the migration process was put on hold.

“Only one Section relocated to Telkom Towers, Northern Tower Building. The migration process will commence once the National Department of Public Works and Infrastructure has addressed the identified challenges.”

This meant police officers working in the CFR, and who went into the office to do their jobs, were still expected to do so in an unsafe building.

And worse, they faced being moved to another problem building.

During last Wednesday’s briefing in Parliament, Major-General Sinobia Hankins, from the police’s supply chain management division, said that at the building the CFR was meant to move to, one of the Telkom Towers, there were “visible water leaks in basement areas.”

Parliament also heard that the lifts did not work (based on a previous visit there) and the carpets were “really in a terrible condition.”

Hankins said there were plans to start relocating old CFR documents to the Telkom Towers building.

But first, security measures had to be added to that building and “the dampness” needed to be dealt with so that the documents would not be affected.

South Africa’s CFR is therefore between a rock and a hard place.

Or, more literally, between crumbling rocks and a damp place.

During last Wednesday’s Parliamentary briefing, Deputy Police Minister Cassel Mathale said: “This thing of police having to rely on other departments for their tools of the trade is a problem.”

He was likely referring to the Department of Public Works and Infrastructure as it needed to sort out the building the CFR was meant to move to.

Mathale’s words suggest that other government departments do not prioritise or take seriously the SAPS and its critical functions.

The alternative is that they are not equipped to do so.

Whatever the reason, in a country meant to be trying to recover from the ravages of State Capture, this is a horrific shame.

It is also obviously concerning that members of the CFR, a critical SAPS unit, have been subjected to even the expectation of having to work in a place found unfit for human occupation.

These are people forming part of the crucial buffer meant to prevent criminals from getting hold of guns.

Adding to this mess are the actual operations of the CFR.

There have been filing and IT system issues, as well as firearm licence backlogs, apparently brought on by Covid-19.

It has not been going smoothly at the CFR by any means.

Beneath all this, suspicions of corruption tail it.

A July 2013 government statement said the SAPS “has confirmed that a fraud and corruption investigation is underway into its Central Firearms Control Register unit.”

That ongoing case centred on allegations that the cops created fraudulent firearm licences for suspects.

In June 2020, a SAPS statement said: “Intensive and extensive investigations following alleged wheeling and dealing at parts of the Central Firearm Registry (CFR) has led to the involvement of at least 21 people and the arrest, at this stage, of at least sixteen people on multiple criminal cases.” (This is what Kinnear was investigating before his assassination.)

During last week’s briefing to Parliament, it was heard no CFR officer had a criminal record.

Previously, others had faced disciplinary hearings and some criminal cases were ongoing.

Rooting out bad cops is necessary.

So too is ensuring the safety of good cops.

The situation of the CFR being housed in a building years ago deemed unsafe is a symptom of much deeper policing and state failures.

Twelve years ago, the police minister at the time, Nathi Mthethwa, already then talking about a CFR turnaround strategy, said: “In order to score victories in the fight against crime; we need to ensure that our own ‘house’ is in order…

“No matter how committed we can all be in the fight and reduction of crime; if one portion of our chain is weak, it will weaken the entire chain…

“2010 is A Year of Action: Ensuring That All People In South Africa Are, and Feel Safe.  We cannot achieve this goal if our house is in tatters, hence our resolve to fix things, and fix them now.”

More than a decade has elapsed, political heads have changed, police management has become more fractured, cop bosses have been culled, and corruption claims abound.

The truth remains, the house is still very much in tatters.

Perhaps with Sitole’s departure at the end of March, a new top cop will be appointed who will prove to be a commissioner who stops paying lip service and finally starts turning this sorry situation around. DM