SA irons out details of its National State of Disaster

A workers prepares to test a client at the Lancet Laboratory on March 19, 2020 in Johannesburg, South Africa. It is reported the pathology services company has seen the spike in requests for the COVID-19 tests after President Cyril Ramaphosa declared the pandemic a National State of Disaster. (Photo by Gallo Images/Fani Mahuntsi)

Things changed overnight in South Africa on 15 March, and it won’t be the last time it does. Daily Maverick’s Daily Digest will provide the essential bits of information about Covid-19 in South Africa and the world each day. Read on to understand these issues more deeply.

On Thursday, it was announced that the number of local transmissions has slowed – only one new patient had no history of international travel.

However, some patients had visited countries not previously thought of as high risk such as the Democratic Republic of Congo, Mexico and the Netherlands. There are still no confirmed cases in the Eastern Cape, Free State, North West or Northern Cape.

South Africans woke up to a new set of regulations that set out what must be done (and not done) under our current National State of Disaster. The day was spent quickly adjusting.

It’s been a week of constant adjustments.

On 15 March a National State of Disaster was declared in terms of the Disaster Management Act by Co-operative Governance Minister Nkosazana Dlamini-Zuma and announced by President Cyril Ramaphosa. The president gave some indication of what was going to change.

On 16 March, Cabinet ministers gave more details on the action plan, and the National Command Centre was established to coordinate action.

On 17 March, the National Command Centre had its first meeting.

On 18 March, Ramaphosa and leaders of political parties met at Parliament to get consensus on the plan. All 14 parties gave it their blessing. Also discussed was the reality that a State of Emergency remains a possibility.

Marianne Merten clarified the difference between a State of Disaster and a State of Emergency in a vital explainer here. She also highlighted some of the new regulations, which we should all pay attention to because breaking the rules could come with a fine or jail time.

This infographic from the Department of Cooperative Governance and Traditional Affairs briefly explains the new regulations. 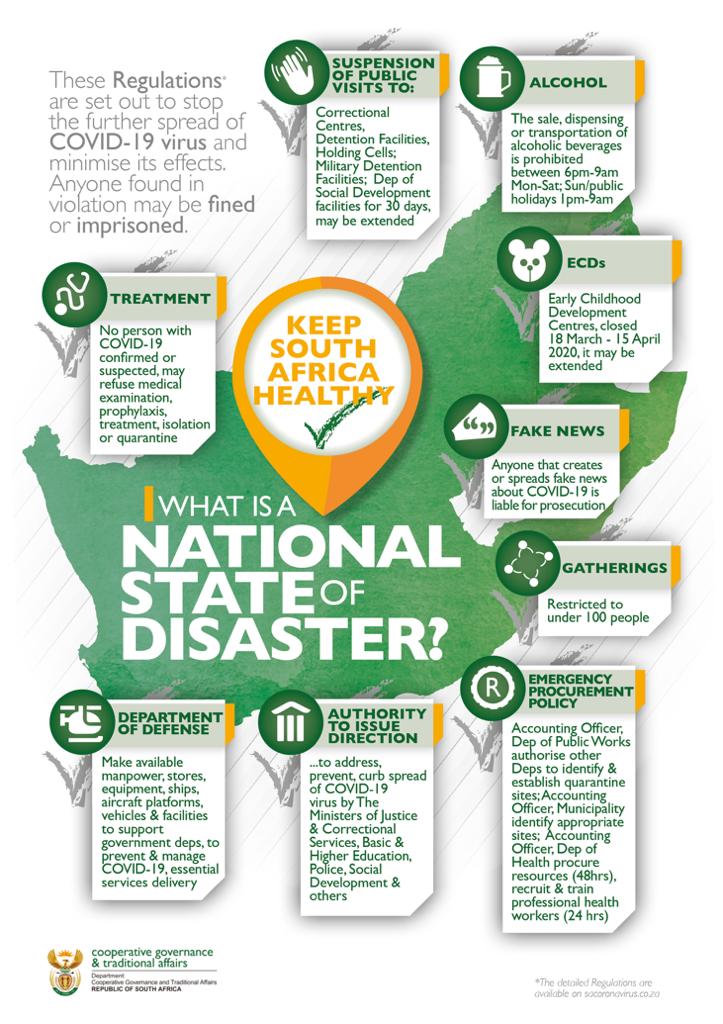 More provinces have stated what their game plans are. The Western Cape Department of Health has said it will be working closely with private hospital groups and has set up a provincial hotline (call 021 938-4102). It has said it will establish contact tracing teams in every community, and isolation facilities and extra communication channels in every community. Sandisiwe Shoba outlines its plan.

Meanwhile, the Western Cape Health MEC, Nomafrench Mbombo, has had to go into self-quarantine after being alerted to the fact that the consul-general of France in Cape Town, Laurent Amar, had tested positive for Covid-19 after they had a meeting together 13 days before.

Gauteng also announced its provincial plan. Residents now need to apply for permission from the police to hold weddings and funerals. Like the Western Cape, the province will be minimising outpatient and elective treatment services. It will also be employing more tracers and establishing five food banks. Zukiswa Pikoli reports.

Cities are also coming to grips with the impact of the new rules. The potential election of new councillors and mayor for Tshwane may be delayed because of the postponement of all elections for the foreseeable future. Ekurhuleni has four confirmed cases of Covid-19 but is yet to announce how it will deal with the outbreak.

The South African Reserve Bank announced that it will cut the repo rate by 100 basis points. Let Ed Stoddard explain.

Religious leaders across the country have adapted to the new regulations by shuttering places of worship and cancelling major events. All shuls have been closed as of 19 March, as well as 100 Hindu temples.

Friday Jumuah prayers have been suspended by mosques for the next four weeks and the Methodist church has cancelled all Good Friday and Easter Sunday services.

The Zionist Christian Church has cancelled Moria, its Easter gathering which draws the country’s largest religious community together in one place each year. As Ferial Haffejee writes, Ramaphosa appealed to religious leaders to help in the management of the outbreak.

In contrast, some workplaces are still putting their employees in precarious working conditions.

The United National Transport Union has called for the suspension of Metrorail services until 14 April. This comes after its members reported that the Passenger Rail Agency and Transnet are not providing them with the equipment they need to remain protected from the virus while working. Members of the South African Transport and Allied Workers Union have reported the same. Suné Payne followed this up with Prasa.

Miners too are in a precarious position. Ed Stoddard asks how the industry is going to keep its workers safe and comply with the new regulations.

Two Wits students have taken the university to court to stop it from evacuating dormitories. The students insist the residents should be tested for the virus before being sent home where they could spread it. However, the university argues it cannot enforce testing and that keeping so many students together in a confined space would be unsafe.

Communities have started organising themselves to discuss the outbreak and how they are going to manage it. For instance, Zukiswa Pikoli attended a meeting of the People’s Health Movement which was attended by school learners, academics, healthcare workers and civil society organisations from around Cape Town. They discussed how to deal with the outbreak while living in a system that is already fractured and overburdened.

As Pikoli writes: “They provide clear testimony of how lack of adequate housing, poor access to water, working conditions and unsafe public transport make it virtually impossible for thousands of people to use simple recommended public health measures such as frequent handwashing and social distancing to slow down the viral spread and flatten the curve.” 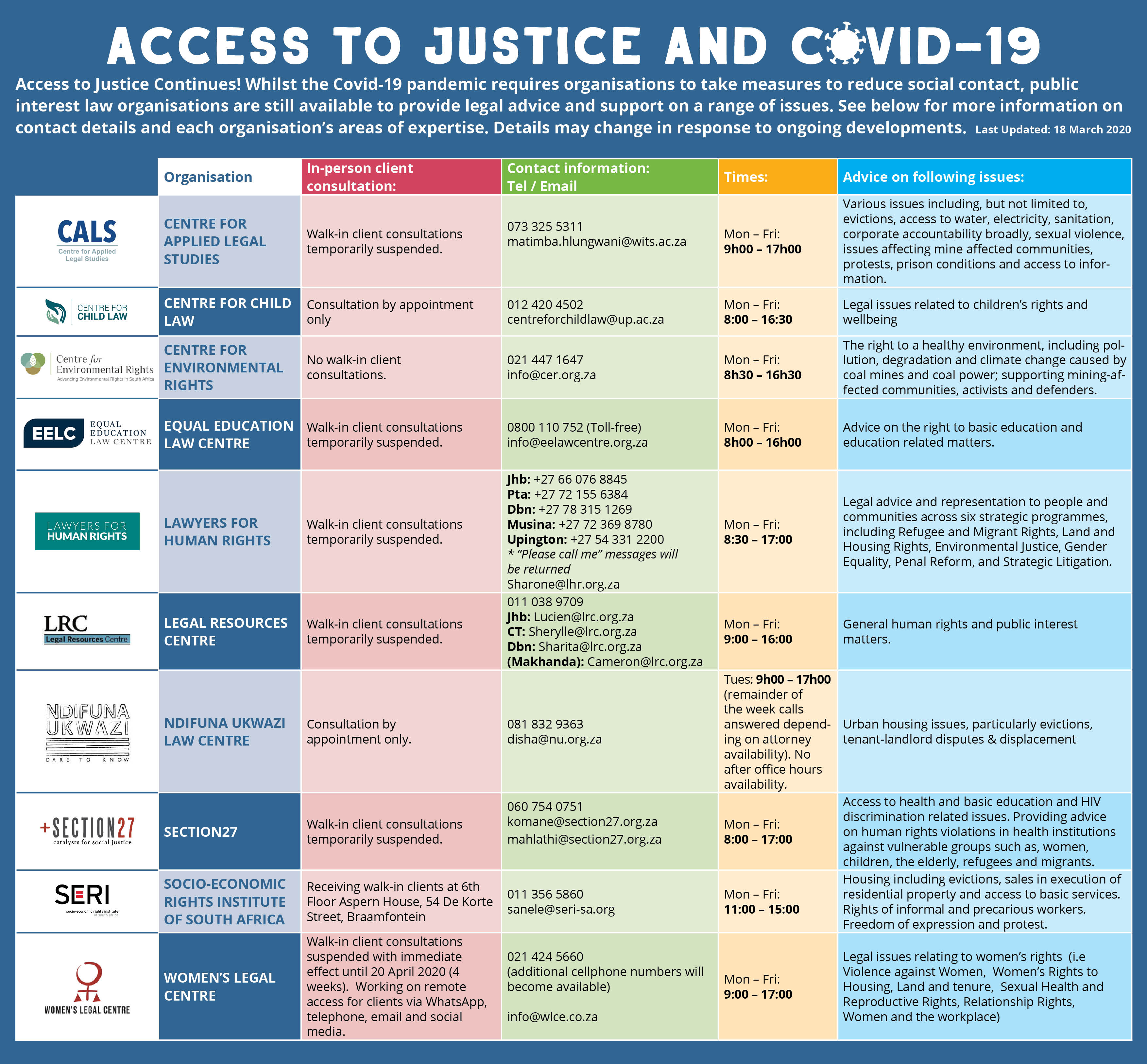 Southern African human rights defenders have warned of the potential havoc the virus would wreak in the region if the outbreak is not controlled. They fear it may undo decades worth of progress in development, democracy and human rights. Mark Heywood outlines their argument.

The Black Sash has also added its voice, calling for the Department of Social Development to do better to protect those collecting grants in person.

The certainty that (might) come with testing is on a lot of people’s minds. Rebecca Davis caught up with a woman who is currently going through the process and she explains the ins and out of who should be tested, where and when according to health authorities.

Considering that the Covid-19 hotline has already received more than 324,062 calls, we thought it wise to answer our readers’ burning questions about the virus and the outbreak. Read the answers to your own frequently asked questions here.

In addition, Adele Baleta brings us up to speed on the latest in the Covid-19 vaccine race. In a nutshell: the first human clinical trial has started and others are to follow soon. But it’s not as simple as that, so read about it. 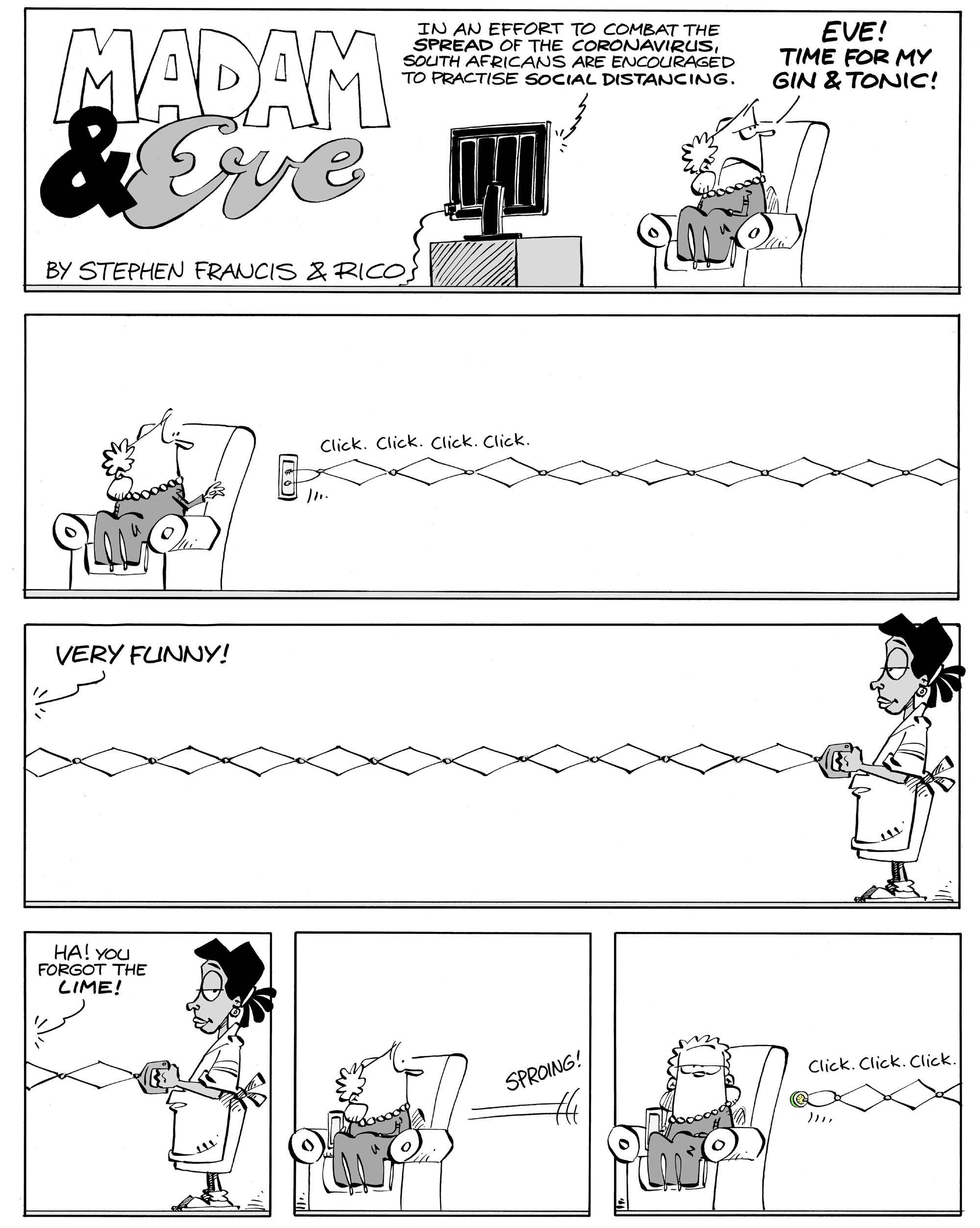 As South Africa’s Covid-19 count ticks upwards, a South African reflects on his month under lockdown in Wuhan and the possibility of it ending and soon coming home as planned. On Thursday, Wuhan had zero new infections for the first time since the outbreak began. MC

Catherine Tomlinson for Spotlight • 41 mins ago