Instant Noodles & Empty Streets: On being a South African who remained in Wuhan 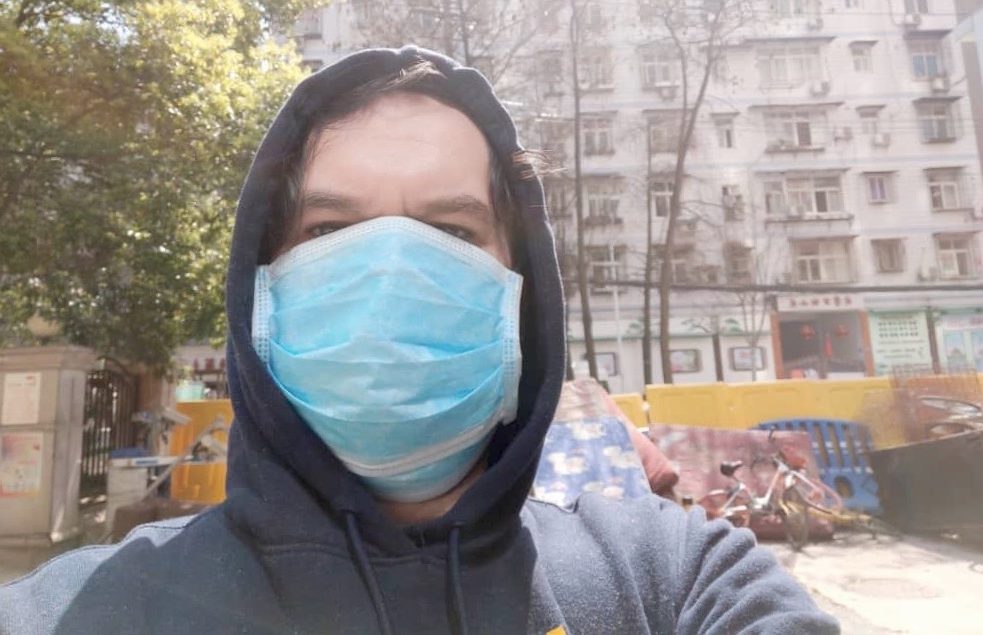 Stuart Williamson in front of his barricaded apartment block in Wuhan during the early stages of the Covid-19 outbreak.(Photo supplied)

For the past month in Wuhan, China, South African Stuart Williamson has subsisted on noodles, chocolate bars and fruit ordered online, looking out over a skyline swathed in mourning.

Based in Wuhan, Stuart Williamson has taught English to Chinese youngsters for four and a half years. On Tuesday this week, 42-year-old Williamson was supposed to arrive in Cape Town for a long overdue family visit, and to show his girlfriend Kaya around South Africa.

Instead, confined to a 53 square metre apartment on the fourth floor of a 28-storey high-rise, he recounted to Daily Maverick how Covid-19 has turned his life upside down.

From a window in his apartment, Williamson described Wuhan – epicentre of the global Covid-19 outbreak and home to 11 million residents – as a ghost town, with empty streets barring an occasional delivery van. No more street food or Starbucks coffee; for the past month he has subsisted on noodles, chocolate bars and fruit ordered online, looking out over a skyline swathed in mourning.

“Everything is quiet,” says Williamson, speaking over a WhatsApp call. “Everything is dead still, there’s an atmosphere of deadness around the whole city. There are no construction sounds, hardly any people about; it’s very much a ghost town. Normally, there’d be thousands and thousands of cars on the road, but right now only about one delivery van an hour. Businesses are not running, 90% of shops in Wuhan are closed. The only businesses that are operating are those who can deliver to communities.

“Luckily I have a Chinese girlfriend who helps me out with online shopping. This has alleviated the stress a lot as I can get a bigger diversity of things to eat, you know, because of the language barrier. My survival stuff. I’ve managed to do okay thanks to her. If I need to collect food downstairs in my block, I can do so at the gate, where they have patrol officers controlling the parameter.”

Is he hungry, at all?

“Well, I’m not a good cook,” Williamson says, laughing. “Unfortunately, I haven’t had a proper meal since this lockdown has happened. Actually, I don’t have a proper kitchen. That’s why I get instant noodles and things like that. You see, the food in China is really cheap, so normally I’d just eat takeout or whatever. I mean, normally, I’m always on the move. Going to gym three or four times a week, with a salad and coffee at Starbucks. I live a very busy life most of the time, working six days a week. So now, in terms of exercise, I basically jog around the apartment block premises where I’m allowed, which is like a hundred metres. I do some sit-ups and push-ups, things like that.”

Williamson’s WhatsApp avatar shows him next to his girlfriend. In real life, he last saw her when she briefly visited him on 15 February. She lives in an apartment block only a 25-minute subway ride away. But in a city under emergency lockdown, this is an unbreachable chasm.

“The 20th of January, that was basically our last day of work,” recalls Williamson. “At that time, there were only 44 cases of the coronavirus confirmed. On the 23rd, we were told that there were almost 500 cases, and that the city was closing all forms of transportation. And that they were closing the city off to the rest of China. So, as you can imagine, we were all panicked. The word virus conjured images of sci-fi movies in our minds. At the time we weren’t stuck indoors all the time, we could go out with masks, and go to stores to stock up on food for the first two weeks of the lockdown.

“After the two weeks, there was a huge surge of cases confirmed. In one day, new cases increased by 10,000 people. And that’s when the Chinese government decided to completely contain the areas that people live in. And we could not go outside our individual apartment blocks. They blocked everything off, people had to stay inside their buildings and could not move. We were in complete lockdown with the government sending people to our doors. Basically “contact tracing”, as they call it, to see whether we had high temperatures, et cetera, et cetera. If people had a high temperature, they told you to go to the hospital to check for the virus. There was a lot of panic during that stage. I would say for about a whole month, we were on edge.’

Despite the dire circumstances, Williamson’s voice sounds relaxed – bright even. His words paint a picture of resilience under pressure.

“I will be pretty honest with you,” he says. “Mentally, this has been one of the most challenging experiences of my life. Being locked down in an apartment and basically being indoors most of the time, it does have its toll on you mentally. You’ve got to be mentally strong. You need to keep yourself occupied with other things. At the moment I am doing full-time online teaching for my company, which helps a lot. But before that, when we first encountered this problem, there were great levels of anxiety. As time went on, it became easier and easier. You just have to keep positive, because if you get down in the dumps in this situation, it’s going to impact you in a very bad way. I think the media does a lot of damage. There’s a lot of fake stories that go around that just increase your anxiety. But yes, it has been one of the biggest challenges in my life.”

For a moment his demeanour crumbles: “At times you do wake up and just wish this whole nightmare would actually end,” he says. “I just want to walk down the streets and live life normally again, resuming life properly, interacting with people. I’m craving for that interaction.”

Williamson did receive an email from South Africa’s government last week, inviting him to join the flight of South Africans evacuated from the city on Friday. On Saturday, SAA flight ZS-SND touched down at Polokwane International Airport. It was reported that 146 South Africans from Wuhan disembarked, who have all since tested negative for Covid-19.

However, Williamson decided against leaving China’s ninth most populous city.

“Well, personally I thought it’s a bit too late,” he says. “The Chinese authorities are actually stabilising the situation, and I thought now that the rest of the world is basically catching it, why should I expose myself to that? Plus there will be travel restrictions and it would be even more difficult for me to come back. China is implementing a policy now: foreigners, when they come back with their visa, have to go into quarantine for two weeks. I thought it was pointless.”

As the virus spreads globally, families are getting caught in the crosshairs of bureaucracy and emergency clampdowns. Williamson says he personally knows up to 15 South Africans who elected to remain in Wuhan – two of whom decided to stay because their spouses could not get South African visas.

He is full of praise for Chinese authorities, who, at the height of the crisis in February, turned abandoned office blocks into hospitals, with tens of thousands of healthcare workers flown in from around the country.

“I have no criticism of the Chinese government,” he says. “They actually responded incredibly well to the catastrophe. So there are all these buildings – office blocks – standing empty, which the government turned into hospitals to treat patients at the height of it all, when there were about 60.000 confirmed infected people. You can imagine that their supplies were stretched, their manpower was stretched to the max. In February, when there was a huge surge of cases, the military actually flew in with supplies and, like, 50,000 medical personnel from all over China, to come help in Wuhan. So today there’s about 3,000 people still left in respective hospitals.

“The Chinese authorities have done a remarkable job. They got a lot of criticism from the so-called West or the Free World, as people term it, but they have taken the correct approach in trying to contain this virus. They definitely have the manpower and fighting spirit. I think China is a prime example to other countries. Any other country can learn from China’s experience in handling this pandemic.”

Media outlets reported on Wednesday that, for the first time since the outbreak started, Wuhan had no new infections.

Williamson is hopeful that their lives will return to normal in April, with free movement resuming in Wuhan from mid-April, and schools reopening in May.

He hopes, yet, to travel with Kaya to Cape Town.

“We’re going to wait until all this blows over,” he says. “And I’m not talking about just in China, we’re waiting for the disease to be fully contained across the globe, until it’s safe to travel again. So we will probably do the trip to South Africa at the end of the year, or beginning of next year. Kaya had a South African visa and everything in place. We were really looking forward to the trip. I mean, it was heartbreaking. It was very disappointing. I was very depressed on Sunday, very, very, very depressed. I was really looking forward to this trip cause I haven’t seen my family in two years.”

He pauses, adding: “But what can you do?” DM

Old-fashioned crisps used to come with a packet of salt giving the purchaser the choice whether to salt their chips or not.