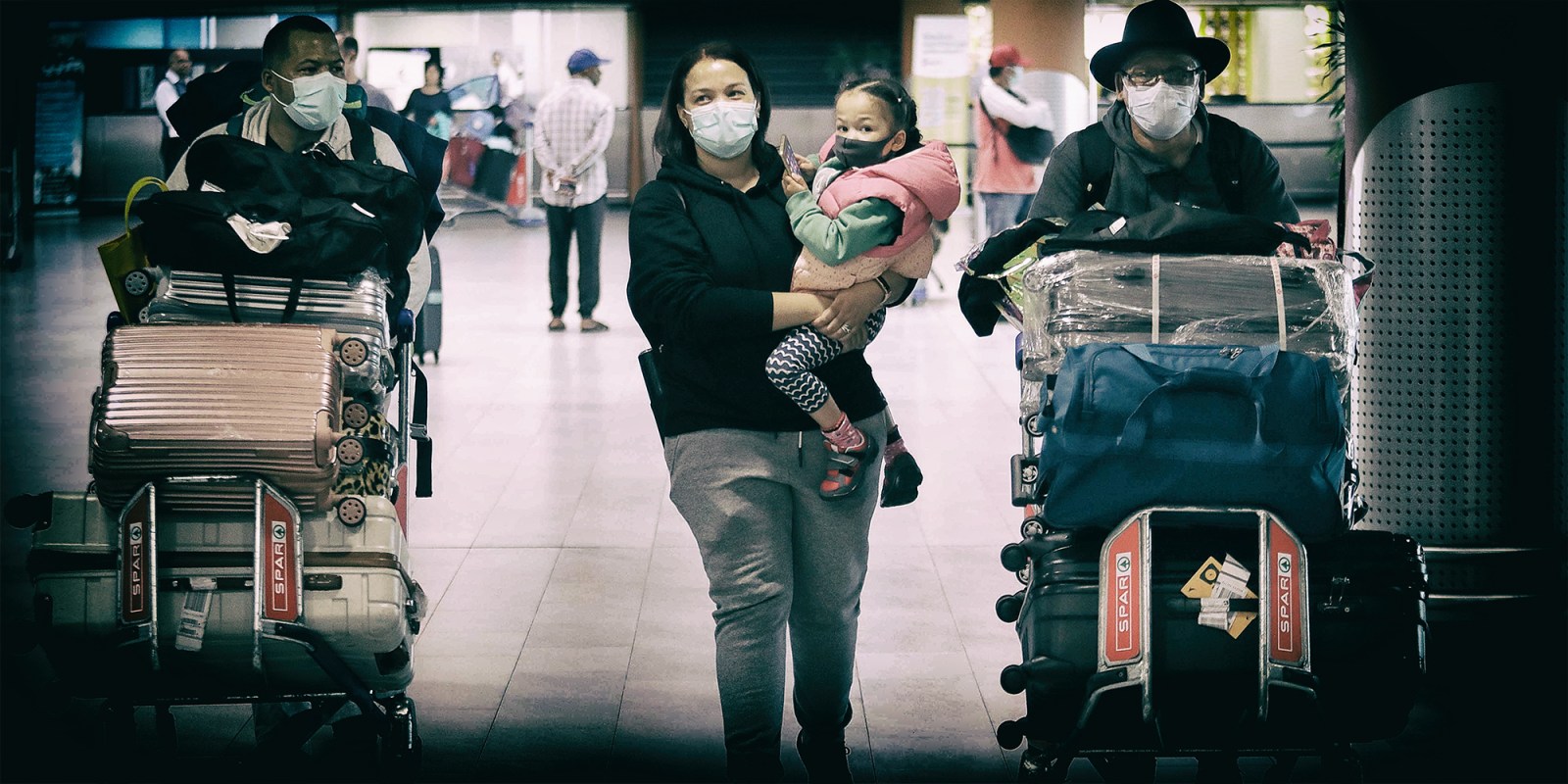 In the face of broken public health systems and populations weakened by hunger and communicable disease, particularly HIV and TB, an uncontrolled Covid-19 outbreak in southern Africa could wreak havoc and set back development, democracy and human rights by decades.

Southern Africa is a region of 345 million people. Although still divided by colonial borders, there is a huge amount of official and unofficial migration, much of it driven by poverty and economic necessity; some of it driven by people fleeing corrupt and increasingly authoritarian governments. That’s why we need a co-ordinated regional response that takes account of these realities. Although the official numbers of Covid-19 infections remain extremely low, the region is very vulnerable. It needs an emergency plan. It doesn’t seem as if one is coming.

The SADCC was initially created to unite against a common threat, apartheid South Africa, and to “lessen economic dependence on South Africa”. That threat ended in 1994, but since then SADC has faced other common challenges, most notably HIV, TB and increasingly, the climate crisis.

Today, however, there is a new regional threat. Covid-19.

In response, together with the African Union, SADC needs to demonstrate unity of policy and purpose. In the face of broken public health systems and populations weakened by hunger and communicable disease, particularly HIV and TB, an uncontrolled Covid-19 outbreak could wreak havoc and set back development, democracy and human rights by decades.

Up to now, Africa has been fortunate that the coronavirus disease appears to have been relatively slow in spreading. The WHO Africa Weekly Bulletin of 9-15 March reported 175 confirmed cases across 29 countries. At the time of writing (18th March) according to the New York Times daily survey and Government updates there were more than 100 confirmed cases in southern Africa:

But despite this threat, and the window of opportunity SADC has to prepare for it, there seems to be little coordination, with each state doing its own thing at a different time.

It’s not that there isn’t intergovernmental awareness. On 9 March 2019 SADC health ministers held an extraordinary meeting in Tanzania on the Covid-19 crisis which “urged Member States to put in place National Preparedness and Response Plans as well as contingency and emergency funds to address gaps in prevention, impact mitigation and other interventions.” It also called on SADC members “to mobilise domestic resources, and invest in public health systems to ensure resilience and health security”.

However, with few exceptions, this mobilisation has been largely invisible to millions of vulnerable people and communication to the public has been extremely poor.

As a result, on 16 March 2020 the Southern African Human Rights Defenders Network (SAHRDN), a network that connects human rights defenders across SADC, addressed an urgent memorandum to heads of state, the SADC secretariat and the AU Commission, appealing to members states to Unite, Invest, Prepare, Prevent and Respond!

The letter describes “Africa’s health situation and security” as being “at a crossroads”. It reminds states of the 1999 SADC Protocol on Health and complains that states have taken “individual and uncoordinated policy decisions” despite the fact that:

“SADC borders are porous, making Covid-19 virus a regional public health threat that can unleash a humanitarian catastrophe of immeasurable proportions in the sub-region.

“No country can stand on its own and fight this war,” the letter warns.

As a result, the letter calls for declarations of national disaster (as has now happened in a number of countries), collaboration, preparedness, training of healthcare workers and a SADC health emergency programme.

In particular, it asserts the need for a response based on the right to health, drawing special attention to the rights of migrants (documented and undocumented) and reminding SADC of a 2008 World Health Assembly resolution on the issue of migrant health.

Lack of coordination across SADC countries

The SAHRDN letter was necessitated by the fact that there have been vastly differing responses across the region. Although in recent days there has been a scramble of announcements, they have been slow and out of sync with each other.

However, in keeping with the theme of this article, nothing was said about regional coordination. On the issue of the millions of migrants from Southern African countries who live in SA, the speech was silent. As a result, Lawyers for Human Rights in SA has called for a moratorium on all deportations and no discrimination in access to health care services.

The letter pointed out that Zimbabweans were vulnerable because of the country’s close ties with China as well as the millions of Zimbabweans in SA. It complained that even the home page of the Ministry of Health website says nothing. Citing duties arising from the Zimbabwean Constitution it called for the provision of “reliable information to the public” as well as public education on prevention, infection and care.

“In our considered view, nothing short of a sustained serious campaign of public information… will be sufficient for you to discharge your constitutional and legal obligation that is imposed by the right of access to information.”

ZLHR received a reply on 9 March setting out steps taken. On the matter of the website it reported that a portal for information had been created, but “the ISP which hosts the Ministry’s website went down and material was lost”.

According to the Zimbabwe opposition shadow Minister of Health, Henry Madzorera, quoted in News Day: “Our health delivery system in terms of human resources is very thin on the ground. Healthcare workers are demotivated and we don’t have the correct protective equipment in the correct places, so if we have a case, it’s going to be a disaster.”

On 14 March, in response to ZLHR and others, the Ministry of Health and Child Care issued a statement with general recommendations but no concrete measures. It was only on 17 March that President Emmerson Mnangagwa addressed the nation on television and declared Covid-19 a national disaster, but (like Botswana) stopped short of closing schools.

On 17 March he carried out a “de facto coup” when he replaced all the heads of the military with his loyalists. This prompted the SAHRDN to tweet “Ominous signs in Malawi: instead of carrying out law reform and preparing for credible elections, President Mutharika goes for broke, defies court judgments [on reforms and fresh elections] defies parliament [law reform]… detains human rights defenders and fires the army commander”. This determination to retain power at any cost and complete ignoring of the peril posed by Covid-19 in Malawi is a matter of grave international concern.

No evident plan for scaled up testing

At the time of writing, SAHRDN had not received a response to its 16 March Memoranda. Attempts to contact the SADC Secretariat were unsuccessful and the SADC website does not even mention Covid-19. In addition, other multilateral agencies including the World Health Organisation and UNAIDS have been most notable by their absence of practical advice or resource mobilisation for the region. This is particularly problematic given the serious dangers of co-infection between HIV, TB and Covid-19.

Although SADC governments will probably defend their responses, what research for this article has shown is that communication, consultation and involvement of civil society is almost non-existent in most countries. Even more worrying is that even where countries have made public statements, in most cases their policies and emergency regulations say nothing about testing or treatment.

Both are serious omissions, particularly given WHO director Tedros Ghebreyesus’ most recent statement:

“You cannot fight a fire blindfolded. And we cannot stop this pandemic if we don’t know who is infected.

“We have a simple message for all countries: test, test, test.

Not announcing a plan for testing suggests that southern African governments are overlooking one of the most important lessons we have learnt so far from responses elsewhere on the globe: scaling up testing, rather than waiting to test people who are sick with Covid-19, is crucial to prevention.

Although none of our governments will admit it, this is an admission that southern African health systems are unequipped to take even some of the initial steps needed to respond – never mind preparedness for the high care that will be required when thousands of people begin to get sick.

While the figures are still low this is something that needs to be addressed urgently. There is a need for an urgent mobilisation of resources to ready health systems; appeals need to be made to the international community, including for debt relief so that the vast sums paid in interest can instead go on health services

Unless this happens soon southern Africa will face the consequences of Covid-19 in the same way the region has felt HIV, TB and Ebola. Once vaccines and treatment are developed the rest of the world will recover.

For the region, however, the damage will be lasting. MC