Snapshot: ANC’s above the line and below the belt – final stretch promises a big and dirty fight 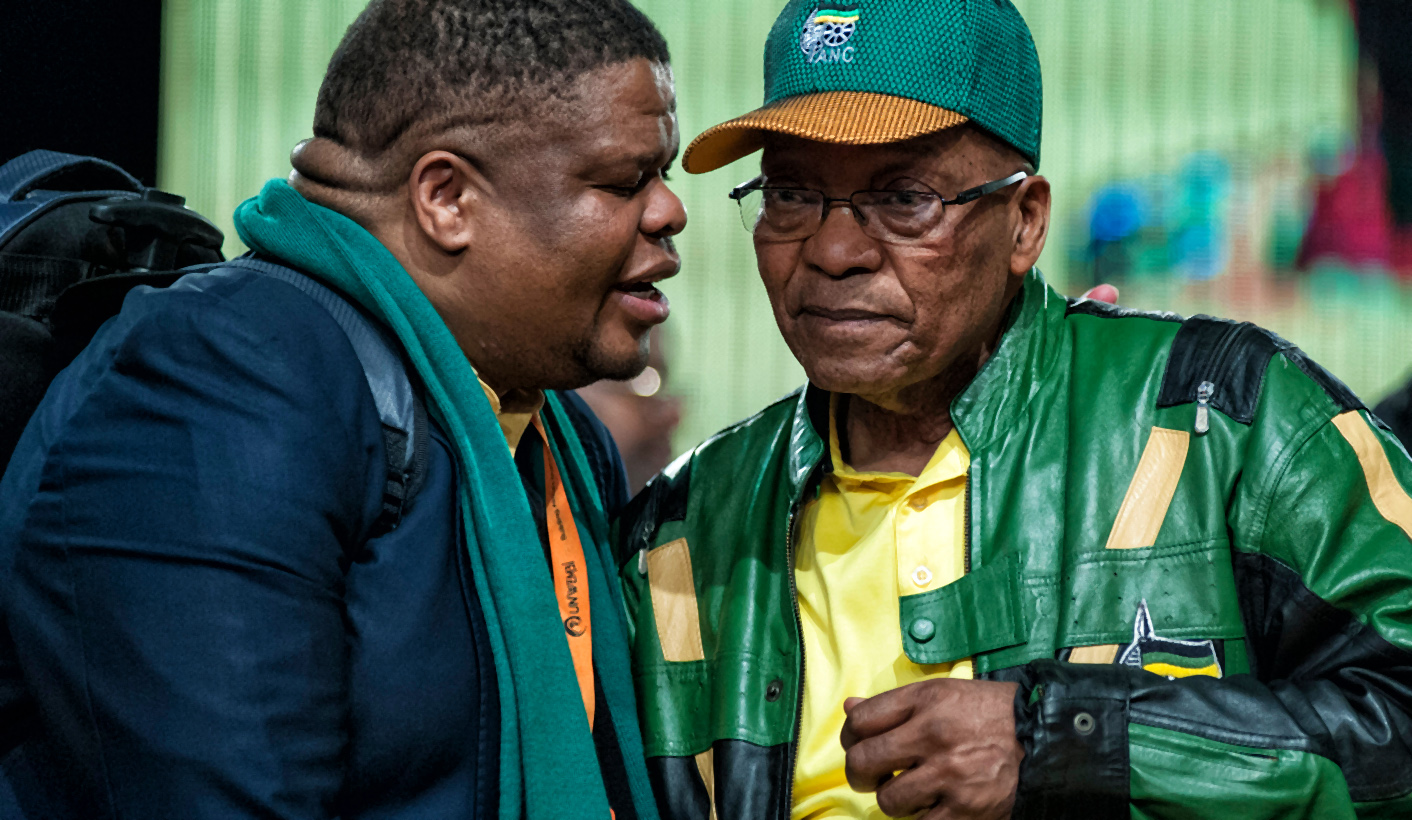 ANC policy conference out of the way, it is by now surely accepted that the next five months in our politics could determine the coming decade. The stakes are high, and it is still difficult to make predictions about what will happen, and who will eventually prevail. But there are some indications, on the surface at least, that the balance of power is shifting, that one side has managed to build some momentum. The difficulty with judging events in the ANC at the moment is that there is also plenty that is happening below the line, behind the scenes, if you prefer. And if you do not have a proper view of that, then predictions are dangerous. At the same time, it is also most likely that President Jacob Zuma is at this stage not in the position that he would have liked to have found himself in. By STEPHEN GROOTES.

In public, the story of the political year so far is that rise and rise of Deputy President Cyril Ramaphosa. From the moment he told monopoly capital, black and white, that he was “sleeping in the President’s bed”, he has been building momentum. From the election of new leadership in the Northern Cape ANC, to the backing of Cosatu and the SACP, through to this weekend’s decision by a traditional leader in the Eastern Cape to consistently refer to him as “President”, Ramaphosa has been gaining traction.

Key to this was the moment when Zuma conducted his reshuffle, and removed Pravin Gordhan from the Finance Ministry. This allowed Ramaphosa to come out and openly campaign, beginning with his statement that the reshuffle was “unacceptable”. It also allowed other people in the ANC’s top leadership – Gwede Mantashe and Zweli Mkhize – to join him, and show their hand. And of course the complete change created in the ANC by Zuma’s move started to tilt the political table Ramaphosa’s way.

That same dynamic continued at the ANC’s policy conference which finished last week. Zuma’s supporters had wanted land expropriation without compensation, for our economy to be labelled as the result of “white monopoly capital” and for real changes to the mandate of the Reserve Bank. Zuma himself appears to have helped create the context for these shifts. His Mineral Resources Minister, Mosebenzi Zwane, had published a Mining Charter which was the result of a lack of consultation with the Chamber of Mines. The Public Protector, Advocate Busisiwe Mkhwebane, had created, out of nothing, a finding that the mandate of the Reserve Bank should be changed.

But none of that helped (although, one should also remember that these are fundamental changes to years of ANC policy, it’s no surprise that he lost most of them.). And at the end of the conference Zuma himself suddenly started pushing the idea that the person who loses the ANC’s contest should automatically become a deputy leader of the party. Which has been interpreted by many as a sign of weakness.

However, it is also a mistake to write Zuma off.

He still has control over the spy agencies, the leadership of the police and the National Prosecuting Authority, and power and authority given to him by his position as state president. Just on Monday morning it emerged that the offices of the state prosecutor in Pretoria had been robbed. This follows other thefts at the headquarters of the Hawks, and of course the theft at the Office of the Chief Justice. And, as Jonny Steinberg reminded us the other day, the fact that Zuma is President allows him to simply change the subject. Steinberg has suggested that the commentariat are wearing rose-tinted spectacles if they think that Nkosazana Dlamini-Zuma cannot win in December. He then also says that there is nothing stopping the Zumas from, say, making the 2019 election purely about land and dispossession.

On some measures, Steinberg is right. And the evidence in the history of Zuma, the idea that he always wins, is strong. And then we also have to consider the “gate-keeping” and vote-buying that can be happening even right now in ANC branches. This is where the dark arts of political manipulation in a party with the number of members of the ANC starts to play a pivotal role.

The problem is, it’s impossible to know the extent of this. By its very nature, it is all hidden.

But it is surely also possible to say that Zuma is not actually in the position that he would like to be in at this stage.

Consider the choice of candidate for “his” faction. Nkosazana Dlamini-Zuma has proved, so far, to be a very weak candidate. She has behaved in an aggressively factional manner, has refused to attempt to win the ANC’s middle-ground and, for some time, appears to have actually stopped campaigning at all. At the policy conference she uttered not one word in public (there was one small interview she gave to The New Age… but that was all). At the moment, she is unlikely to survive taking any questions at all from any nominally independent media organisation (“Dr Dlamini-Zuma, do you believe the Gupta emails are authentic… Dr Dlamini-Zuma , are you worried Duduzane Zuma could go to jail…. Dr Dlamini-Zuma, why are you helping people who are so obviously corrupt”…)

And then there is the matter of President Jacob Zuma’s choice in the first place. While we do not know the details of their personal relationship, generally speaking, a former spouse is not a politician’s first choice as a successor, to put it rather dryly.

If Zuma were actually properly in charge of things, and had the power to shape events to his will, he would have been able to prepare someone else to be in an unstoppable position by this stage. Someone like Ace Magashule, or Sihle Zikalala, for example. But he has not been able to do that. And while some might think there is some other move, in the distance, and that he has deliberately lulled us into a sense of security, to do that would also reveal his weakness.

Then there are the events that he would surely like to shape but can’t. Zuma surely cannot enjoy having his party’s Chief Whip, Jackson Mthembu, telling all and sundry that the ANC’s leadership should all resign. He cannot be comfortable with ANC member after ANC member being highly critical, in public, of his leadership.

And the fact that Ramaphosa is openly running against his preferred candidate is proof of his inability to fully control the party.

All of this shows that things are not as simple as they were for a decade now: Zuma doesn’t always win any more. Any analysis of the events of late would have to show that he has been losing ground steadily for some time.

Considering Zuma’s track record, his control of the spies and the police, and the evidence that shows he has been prepared to use them before, the selection of someone with the track record of Arthur Fraser to head the State Security Agency, it would be prudent to expect him to now start playing dirty.

It may be that embarrassing details of people’s lives, true or otherwise, start to find their way into the public domain. And it could also be that curious incidents, such as the series of curious moves by the Public Protector, Busisiwe Mkhwebane, also start to happen. Just on Monday, in another surprise move, she announced that she was not going to oppose the Reserve Bank’s application to review her findings on its mandate. She says she is doing this on the “legal advice that she has received… and that she has accepted”. This makes no sense. It begs the question, on what advice did she make the earlier findings?

And how could Mkhwebane, as an advocate, not have known it would be beyond her powers to order a change to the Constitution?

You don’t have to be a conspiracy theorist to be suspicious. Her finding diverted attention away from the #GuptaLeaks, which were beginning to set the political narrative. If that was the intention with that finding, it worked, at least for a while. There are bound to be many more red herrings that will emerge between now and December. Of course, the biggest, most important issue that can divert attention in this country is that of race relations in South Africa. And while it doesn’t need those lovely folk at Bell Pottinger to make this a burning topic of conversation, a little bit of shoving from the Presidency could divert things rather nicely.

To put all of this together is to actually learn one thing. That if Zuma, or Dlamini-Zuma, does win in December, then we will know that in the ANC it is what happens below the line that matters. And that below the line almost certainly meant below the belt too. DM