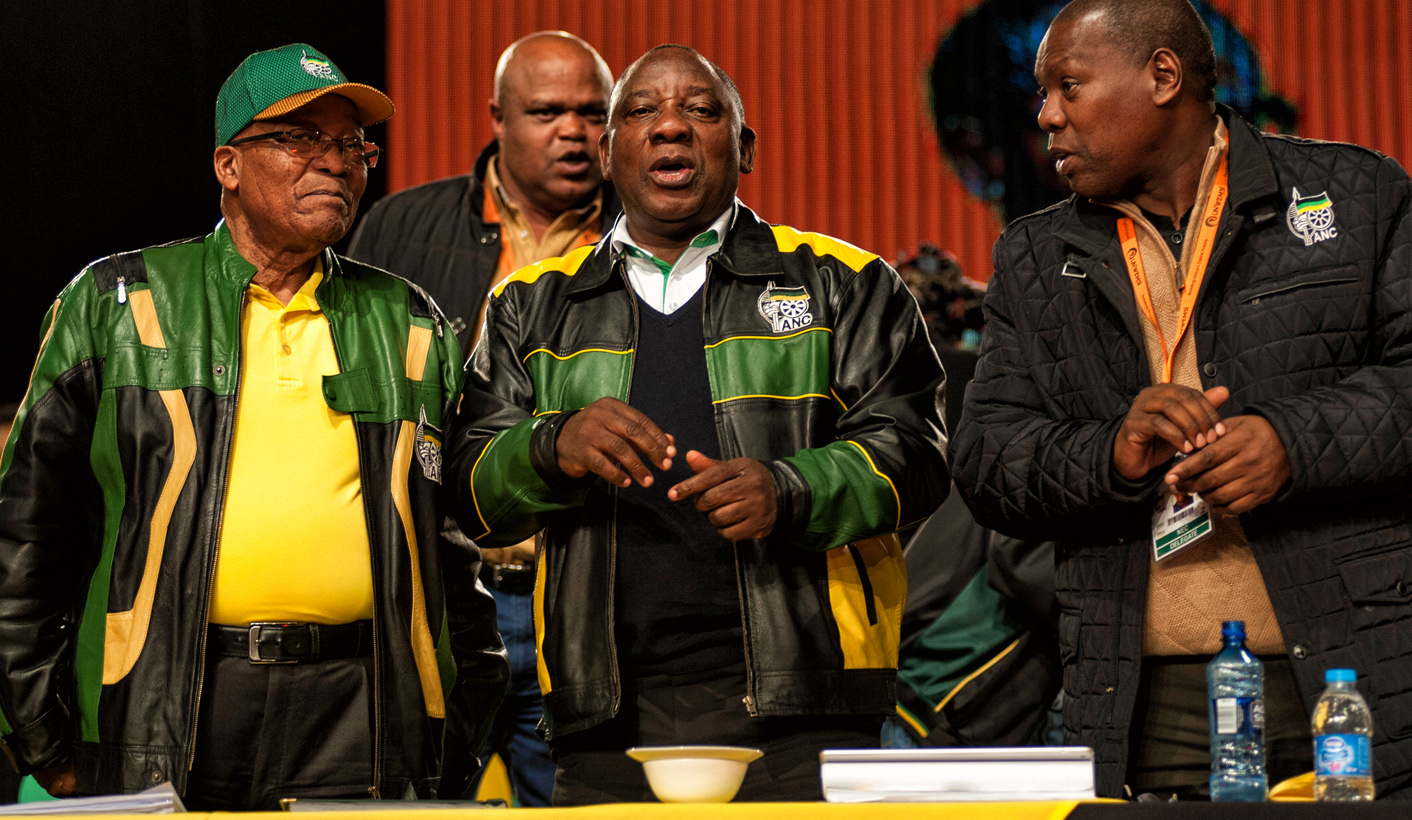 The ANC’s policy conference 2017 has ended, with both a bang, and a whimper. It was a gathering that may have indicated that the balance of power is shifting. It could still shift back. The economy still seems safe to contract at its own pace for the moment. If there is anything that this conference tells us, it’s that there are no solutions on the horizon. By STEPHEN GROOTES.

And so, it finally came to pass that finally the final day finally dawned. It feels that this conference has lasted longer than the negotiations which led to our Constitution. But tripping into the venue, both physically and hallucinatorily, (That’s not exactly a real word, Stephen – Ed) was to wonder what the Economic Transformation Commission was going to say when it finally reported back. The night before we had been told that nine of the 11 commissions had rejected the “white monopoly capital” characterisation of the economy, which was surely a big setback for Zuma.

The mood in the media lounge was subdued. We’d been conferenced into submission. I’m now addicted to the “coffee” on offer, expect my meals at the same time every day, and jerk strangely whenever a certain Media Updates WhatsApp group beeps.

It’s been six days. About as long as it took God to create the Earth. And still, there’s no resolution to anything important, or substantive.

President Jacob Zuma did something he hadn’t done yet: he came through the Berlin fence dividing the media from the delegates. He seemed to be in jovial mood, popping his head into all the TV stations’ booths, saying hello, thanking the media, that sort of thing. I really don’t get it. He’s thanked the media on at least three separate occasions this week. That’s not what he usually does.

Eventually, it was time for what we had all really been waiting for. The reportback from the Economic Transformation Commission. Enoch Godongwana looked a little tired, but otherwise establishment as usual, with a very un-Hlaudi fedora. Zizi Kodwa made the point early and strongly that there would not be time for questions because the President was about to speak. There was a collective groan. And frankly, it’s ridiculous.

“Once”, as Goldfinger remarked, “is happenstance, twice is coincidence. Three times is enemy action.” So then, it’s deliberate.

And he started with a corker. Land. He says that there are two views, that there should be expropriation without compensation, and that the current provisions in the Constitution are sufficient, if it’s all managed properly. And then he announced the kicking down the road. The ANC has decided that “we will continue with a research process to ensure that we take an informed decision on these matters”. Basically, this is what you could call the ANC establishment doing what it did to Julius Malema. He wanted to nationalise the mines in 2010. They snuffed him with research, and a research panel that went around the globe, investigating the issue.

You can imagine how far a panel investigating land expropriation without compensation would have to travel. Just drive past Musina and that should do it.

And then on to the Reserve Bank. It is by now incredibly obvious that the Public Protector’s political findings on the Reserve Bank and its mandate were an attempt by President Jacob Zuma to set the context going into this conference (and conveniently drag the public attention away from the #GuptaLeaks – Editor). But delegates have decided not to change anything. As Godongwana put it, in fact they’re quoting the constitutional clause on the bank’s independence in their resolution. That’s how strongly they feel about it. So, they don’t want to change anything with regard to its mandate.

But, delegates do want to change the ownership structure of the Reserve Bank. They believe that its current structure, with shareholders who are private citizens, should change and that it should be nationalised.

It is hard to overestimate the size of the red herring that is being presented here. Nationalising the Reserve Bank will do nothing to its functioning, its independence, or interest rates. In fact, it will make a few changes on paper, and that’s it. Apart from a cost to the state because those shareholders will have to be bought out. One wonders if the people who are pushing so hard realise what they’re actually pushing? Or if they are perhaps not really grasping the real issues? It’s not above one or two sneaky people who want to maintain the status quo to have pushed this themselves, just to keep everyone occupied for a while.

Amazingly, after Zuma’s speech (more on that in a moment), Godongwana actually came back and took a few questions. There was no more intensity in the room for that, but he basically confirmed what he’d already said. It was fascinating watching him not answer some of the questions put to him. Bloomberg asked if the ANC had a view on the “once empowered, always empowered” dispute in the mining industry (it revolves around whether a mine that has given shares in itself to black shareholders is still considered “empowered” if the black person then sells those shares to someone else). Godongwana gave a history of the issue. And that’s it. That was his answer. Refreshing, wasn’t it?

Being interested in these things, I asked him if there was anything in the discussions in his commission, or in any of the commissions, that he believed would grow the economy and create jobs. I know. It wasn’t fair. His answer was… enlightening:

Well then, if that doesn’t inspire you, maybe Richard Poplak’s flask will. (He won’t tell me what is in it. It’s bracing. And hopefully, hallucinogenic.)

At some point in the afternoon, my memory of this maybe a bit hazy now, but it was between the two Economic Transformation Commission press conferences, I ended up back in the media lounge. There was a screen flashing a lot of red, again and again. It was ANN7, broadcasting the image of its sponsor.

Zuma was on the stage, giving his closing address.

And his main point, mostly unscripted it seemed, was to back the proposal that the person who loses the ANC’s leadership race should automatically become a deputy leader of the party. I say “a” deputy leader, because he also wants two deputy presidents. This idea was first punted over the weekend by the leader of the ANC in KwaZulu-Natal, Sihle Zikalala. He said at the time that this was the way to defeat the politics of slates.

Zuma is actually taking it further. He believes it will break up factionalism altogether. He used the example of what happened at Polokwane, that the group of people who lost the leadership election were then effectively lost to the ANC. And he made the point that the formation of Cope was the result of that disputed leadership election.

But, before we explore his motives here, he still can’t get around the problem that Zikalala can’t solve. That this has the risk of just taking factionalism into government. And of factional battles simply continuing forever.

Now, as to the motives. The fact that he is making this proposal so strongly, on this platform, must surely be an indication of the level of fear he feels about the ANC’s possible split during or after December’s contest. In other words, he is attempting to make sure that doesn’t happen, to head off a contest, and to stop it from happening at all.

But whether the other faction, Cyril Ramaphosa’s faction, would accept this proposal would depend entirely on the balance of power. If Ramaphosa believes he’s gaining momentum, then there is no point in having Nkosazana Dlamini-Zuma in his cabinet. Generally speaking, if Ramaphosa is losing, it would make sense for him to accept this offer, but in reality, it would not be high on the list of his priorities to stay on as Deputy President having already done the job for all these years, and also giving legitimacy to a party led by Ace Magashule and David Mabuza.

On the policy evidence presented to us at this conference, Zuma is the one on the weaker foot right now. He has lost the “white monopoly capital” argument by nine commissions to two, land expropriation without compensation is not happening (yet), and there is very little evidence of any of his other policy proposals gaining traction. If we accept that policy at this conference has almost entirely been a proxy for the leadership battle, then it must follow that Zuma had a bad conference. Zuma also has no real track record in being magnanimous in victory. He usually kicks the person he beat. Hard. Which also suggests that he is weaker than we thought. And that it may, in time, be that this conference is remembered as the moment when the tide turned… and the tsunami finally started to pull out.

But, Dearly Beloved, as the music is pounding in the media lounge, with the ANC offering free booze as an antidote to the “coffee” of the last few days, and darkness has fallen outside, I can’t help but wonder as to why we are still so far from any real solutions to any of our real problems. Why can’t we, as a country, agree on the next step? Is the structure of our nation, our inequality, racialised as it is, our classes and languages, are they really just too much for us to surmount? Even with the best will in the world. Why is it that more and more we seem to be looking inward to people who are more like us than we were, say, five or 10 years ago.

The ANC has a slogan, “The ANC Lives, the ANC Leads”. The ANC is living. But it is no longer leading. It has six months to change that. If it doesn’t, the ANC as we know it will die. DM