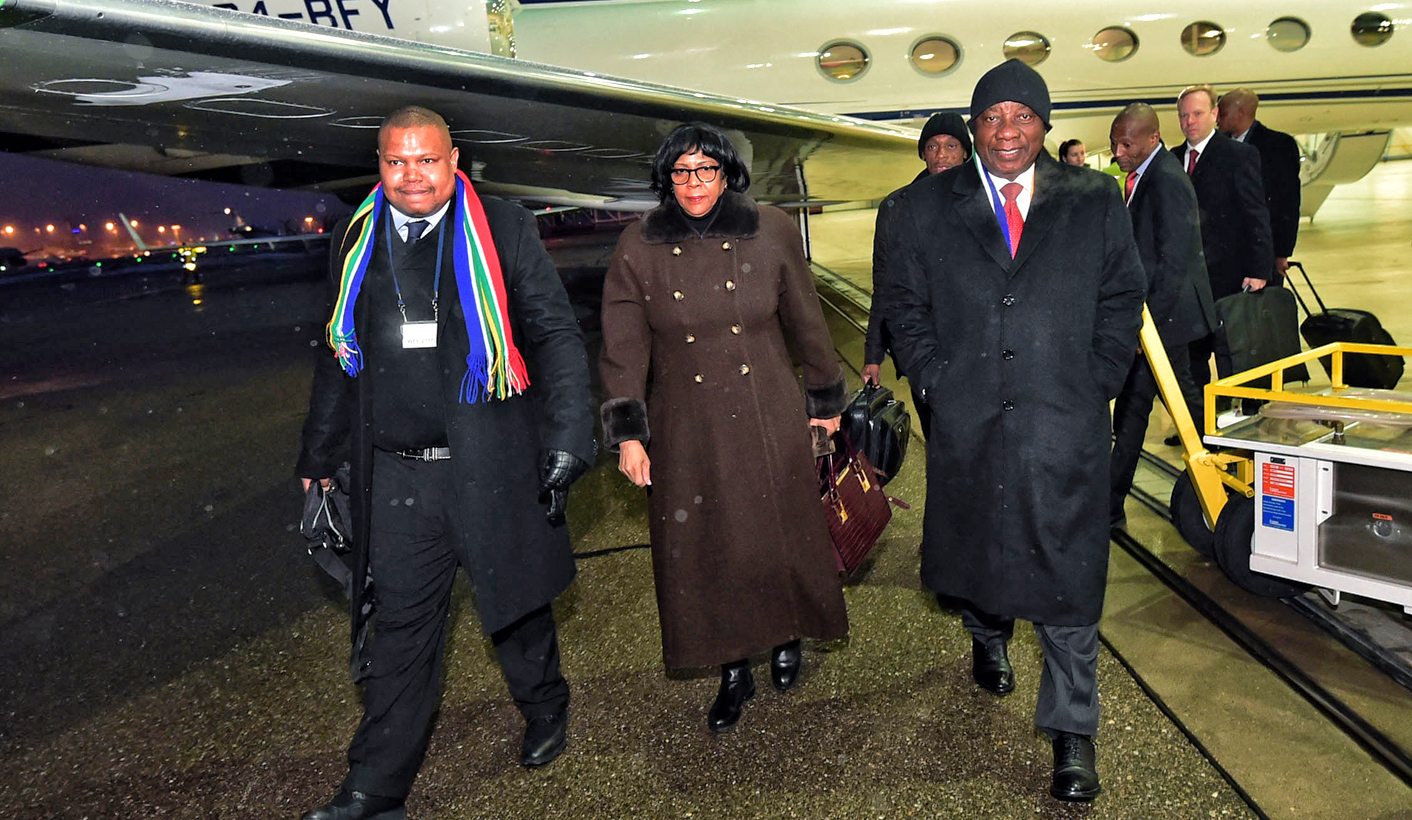 The organisers of the World Economic Forum like to claim that unique and exceptional things happen in the small dorp of Davos when you put representatives of different parts of the “global elite” in one place. The evidence on this is mixed. But one thing you can do is smell which way the wind is blowing. From the way Team SA behaved and looked on Tuesday, it would appear that we should all be more optimistic than we are. Deputy President Cyril Ramaphosa looked more assured and confident than he has been in ages. Finance Minister Pravin Gordhan was his usual image of the epitome of competence. But it was the business leaders, the other South Africans who were in the room, who brought the buzz and the gees of our country to a cold, snowed-in and unfriendly place in Switzerland. By STEPHEN GROOTES.

On Tuesday, he addressed a room of our top business leaders, with at least five other Cabinet ministers. He opened with this:

“I was last here about 15 years ago. I had to sleep in a small little B and B. This time round, I slept in the president’s bed… because he couldn’t come.”

It’s safe to say the swagger is back.

Also on the offensive though, was his Cabinet and, we think, political colleague, Gordhan. Pravin Gordhan’s opening was perhaps more subtle, but better for it:

As a crowd-pleaser, it worked. The monopolists, both black and white, laughed. But it may also have done something else – it may also have thrown an elbow in the general direction of those who have tried to distract us from what is really going on. (All through the press conference, my Twitter time line was full of people criticising Gordhan, and myself. A brief look at the previous tweets of these accounts shows a suspicious one-mindedness of focus.)

If there is one thing Ramaphosa and Gordhan and the other ministers can do, it’s to fill a room of our local elite. Take a deep breath… and here we go: Patrice Motsepe, Maria Ramos, Sipho Pityana (who refrained from his usual anger today), Sim Tshabalala, Iqbal Surve, Jabu Mabuza, Lindiwe Mazibuko, Max Price, Dennis George, Brian Dames (remember him?), Nicolaas Kruger, David Hodnett, Stephen Kosseff and Imtiaz Patel.

There’s a collective noun game for this room that we could play right now. But we’ll go with a “bucketload of capital”.

Ramaphosa did a sort of introduction. It was interesting, in that there was actual news in his comments. He suggested that 2017 would find our economy in a “less turbulent environment” than last year. By this stage we all understood that “turbulent” is political code for “the firing of Nhlanhla Nene and all that followed”. He said that 2016 had been tough, but that we had survived because of our institutions that had “acted as shock absorbers” for our country. Interesting. A nod to the importance of the Constitutional Court, and the Public Protector, perhaps. Treasury, also.

Of course, as Gordhan had already pointed out, life in the global economy is going to be “very complex in the next three to six months, very unpredictable”.

Then, after Ramaphosa’s speech, came an opportunity for the other leaders, mostly in business, to have their say. There is a certain interplay that happens in our business circles at the moment. It was Max Price, he who has shown bravery, tolerance and surely self-discipline in the face of people who display no tolerance themselves, who stood up and asked if what was going to be said was going to be reported. Even though this reporter is understandably biased, it was a fair question. Journalists in a room can hamper certain discussions. If a business person is going to stand up to a deputy president, they may want to calibrate it in certain ways. Sipho Pityana would do it in public, someone else may prefer not to.

There was quite a conversation here. It seemed there was a sense that it should be closed, that microphones and your correspondent should be removed. Clearly there were different views on the issue. Then Maria Ramos stood up. If there is anyone who understands the intersection of our business and our politics, it is her. Ramos said it should be an open conversation. The other monopolists, white and black, shut up and listened to her. And open the conversation remained. Sometimes power lies in how it is exercised. And who you are, and your track record in government.

The first monopolist to speak was Iqbal Surve. He was remarkably quick on his feet, to explain what he thought we needed to do. Ramos was next, with an intelligent and important point about how to frame conversations, about how to deal with education and creating the human capital that we need, because otherwise the growth that we have will be jobless growth.

Price then grabbed the conch, explaining that universities like UCT had continued to function last year, had produced graduates and that academia as a whole in South Africa had actually been very productive. And yet, all everyone spoke about, including the media, was the protests. You can understand his position, it must be galling as hell to see pictures of violence on campuses all the time, when you know that your institution is still working, producing knowledge, and generally adding to the sum of human greatness. He is the kind of person you almost want to spend more time with, just to get a better understanding of his institution, and his view on our society as a whole. The fact that he was not a monopolist may have added to his allure.

Then Jabu Mabuza, the chairman of Telkom and Business Leadership South Africa, stood up. He is a man who commands, and deserves, respect. He gave a passionate and brief speech about how important it was for business to transform itself, to find areas in which it can transform, and not wait for government “with red pens”.

“We need to come up with things,” he said, “and say yes, yes, yes to (those things) as business. These issues will not go away.”

He is playing an important role in our business and political affairs. Long may it continue.

There was a brief response at this point, by some of the ministers. Rob Davies mentioned again his concerns for a changing global economy and what this could do to us; Ebrahim Patel had an excellent point to make about how our economy had “created 2.1-million extra jobs” since October 2010.

Then, time for a brief comment by Dennis George, the general secretary of the labour federation Fedusa, and finally the turn of the chairman of AngloGold Ashanti. Some of the people in the room would have been forgiven for holding their breath as Sipho Pityana rose. I was too busy holding my microphone as close to him as I could. But instead of the fire and brimstone, the condemnation of Number One and all who sail with him, there were instead three constructive points about our economy.

It may be interesting at this point to mention who was there who did not speak. Water and Sanitation Minister Nomvula Mokonyane has been one of President Jacob Zuma’s strongest public supporters. She greeted me warmly as she left, but uttered not a word during the formal proceedings. Presidency Minister and Davos veteran Jeff Radebe sat silently. Meanwhile, sitting in a small clump of chairs, slightly to the side of the main action, was Sihle Zikilala. He is the MEC for Economic Development in KwaZulu-Natal, and thus the person responsible for the holding of the WEF Africa meeting in Durban later in the year. He had nothing to say, and was not invited to add anything. But in some ways, he could turn out to be one of the most important people in the room. Because he is also the leader of the ANC in KZN. And that province could determine, once again, who our next president will be.

But what has really stayed with this reporter is not so much what was said, but the sense of optimism in the room. We are a cynical country; in the past some of our politicians have betrayed us, and some of our business people have made millions as a result. Perhaps it’s that this is a group of people that spent 2016 working together, perhaps it’s a sense that the worst of the Zuma era is behind us (just as the worst of the Trump era is about to begin), or perhaps it’s just good old-fashioned South African optimism.

Whatever it is, this reporter now feels happier about our prospects than he has for some time. DM