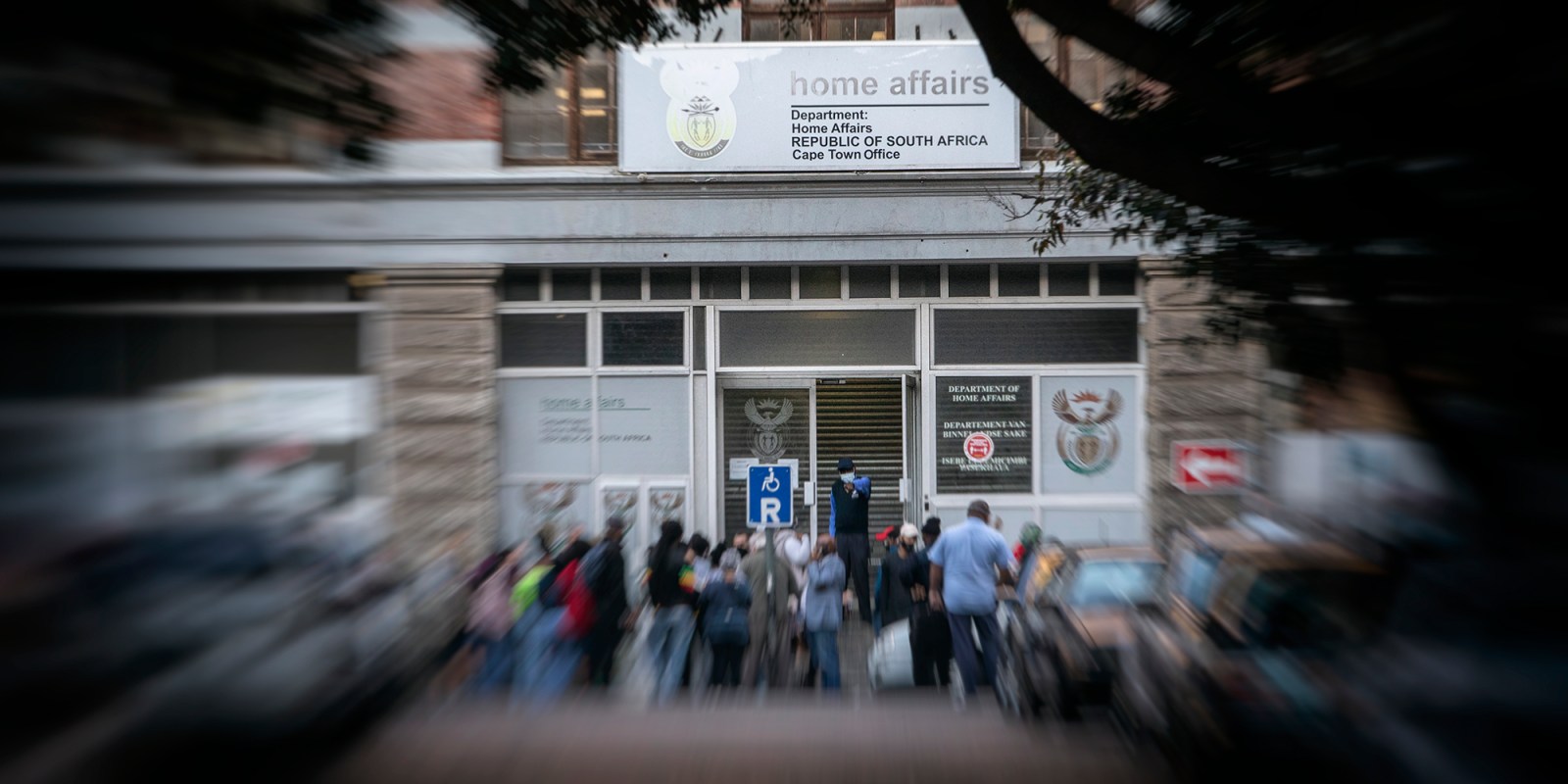 People queue outside the Department of Home Affairs in Cape Town on 3 May 2021. (Photo: Leila Dougan)

Details of how Home Affairs planned to reduce queues were laid out by Minister Aaron Motsoaledi in his budget vote speech, but he largely dodged South Africa’s immigration fiasco, simply saying a complete overhaul was in the offing as the main opposition parties gave him short shrift over our poorly managed, porous borders.

In his budget vote speech on Tuesday, Home Affairs Minister Aaron Motsoaledi outlined a 12-point plan to increase efficiency and reduce the long queues outside the department’s offices – but chronic staff shortages will remain.

Long queues were one of two “elephants in the room”, said Motsoaledi, the other being immigration. But he dealt with immigration in just two short paragraphs, although it received the most heated criticism from the main opposition parties.

A lack of staff at the civic services branch contributes to the excessively long queues. In 2021, Home Affairs director-general Tommy Makhode told Parliament only 37% of civic services posts at Home Affairs were filled, with no budget available to fill 9,025 vacant posts in the branch that provides identity documents, passports, birth and death certificates and marriage licences to citizens.

Daily Maverick has been highlighting how citizens across the country struggle to obtain the documents they need to work and travel, revealing day-long queues in Johannesburg, Stellenbosch and Cape Town.

On Tuesday, Motsoaledi revised the current percentage of filled posts to 39%, saying an additional allocation of R266-million within the R9,4-billion budget for the 2022/23 financial year to deal with the staffing crisis would allow the staff complement to be increased to 42% of what is required to serve the 412 Home Affairs offices nationwide.

He said that over the past five years Treasury had “slapped a ceiling” on the budget for staff salaries, which resulted in people who left the department’s employ not being replaced. Added to this were severe budget cuts over the past two years as money had to be moved to health facilities to fight Covid-19.

Road to Nowhere — a day in a Hell Affairs queue

But now Treasury “came to the party”, he said, enabling the department to hire 764 new employees. Of these, 517 will be front-office staff processing applications for documents such as ID cards and passports, and 288 will be new immigration officers.

But no number of staff could reduce the queues if the “original sin” of the department’s systems being offline was not addressed.

To this end, the State Information Technology Agency (SITA) was spending R400-million to revamp the entire network. The procurement process had just been completed and the work would be concluded towards the end of 2022.

Nevertheless, SITA’s efforts did not seem to be sufficient. Motsoaledi said the department “stood in awe” of the banks who never seemed to suffer from system downtime, and was bringing eight IT engineers from “a leading bank” to help stabilise the Home Affairs network and install some key IT infrastructure. These specialists had been vetted and would soon start working with the department.

Home Affairs was already partnering with major banks, establishing a Home Affairs desk at 28 branches. However, the relationship was fraught, since capturing client details and biometrics at the branches relied on the Home Affairs system being online. With so much downtime, it affected the banks’ reputations.

“We believe that as soon as their own engineers have helped us to increase system uptime, the banks will cheerfully open their doors for Home Affairs services,” said Motsoaledi.

Load shedding also added to the department’s connectivity woes, and generators had been installed in 197 Home Affairs offices. But 215 offices remained at Eskom’s mercy.

The online booking system, piloted at 24 offices, was also aimed at reducing queues. It allowed citizens to make an appointment online and then arrive at the office at the appointed time, avoiding the need to queue. Since it was initiated in December 2021, 33,463 had used it as of 13 May.

However, GOOD MP Brett Herron warned that the appointment booking system discriminated against the poor who could not afford data to book online, while efficient front offices remained a priority.

Almost all opposition MPs remarked on the long queues and people being turned away after waiting a whole day to apply for documents securing their ability to work, study, obtain social grants or travel. But the strongest criticism was levelled at Home Affairs’ immigration branch and porous borders which are attractive to criminal networks.

“We do not have borders, the current manual asylum seeker system has collapsed and has been abused by economic migrants,” said Van der Merwe.

She shot down Motsoaledi’s announcement that the establishment of the Border Management Authority (BMA) was “well under way”, with recruitment of the first cohorts of border guards completed. In April 2022 it would become a standalone schedule 3A public entity responsible for our borders.

“The BMA is not the panacea to our problems,” said Van der Merwe. “It will take millions of rands we don’t have, and many more years to become fully operational.”

According to the budget summary, immigration affairs was allocated R1,5-billion, compared with R2,6-billion for citizen affairs and R2,3-billion for administration.

Motsoaledi had little to say about immigration. Beyond the announcement of the BMA, he said it was a crisis “we are all well aware of” and it would need its own budget speech if he were to start to outline it.

“For today, it will suffice to say we have decided on a complete overhaul of the immigration system of the country,” he said, adding that this work was well under way and would soon be unveiled.

Undocumented migrants – The myths, realities, and what we know and don’t know

EFF MP Lorato Tito and DA MP Adrian Roos tore into the immigration debacle, with Roos saying the “ineffective” BMA was simply creating “millionaire managers” with “Land Cruisers and uniforms” who could not find people illegally crossing the border yet a Carte Blanche camera crew could. Further, the BMA was simply replacing senior managers in immigration who were supposed to be doing that job but remained employed.

Roos said the Stockpoort border post between South Africa and Botswana remained closed because Port Health was not able to implement Covid-19 protocols, resulting in businesses in Stockpoort closing and the bureau de change retrenching staff.

Tito said xenophobic sentiment resulting in the killing of foreigners such as Zimbabwean Elvis Nyathi, was stoked by Home Affairs failing to provide services on South Africa’s borders.

One successful achievement, however, which opposition MPs generally seemed to agree on, was Home Affairs’ deployment of mobile offices. With about 100 in operation and 15 more being procured this financial year, they had been successfully deployed to flood-ravaged areas in KwaZulu-Natal and the Eastern Cape, enabling people who had lost their identity documents to obtain new ones with the usual costs waived.

Deputy Home Affairs Minister Njabulo Nzuza said the mobile units had serviced 131,164 citizens in the last financial year. They were particularly useful for rural and remote areas not serviced by Home Affairs offices, and for targeting Grade 12s so they could write their exams in possession of a new smart ID card.

The department had a target of registering 90% of all births within 30 days by 2024, he said. To achieve this, they wanted to expand Home Affairs’ birth registration sites to all 1,145 health facilities in the country with maternity wards. Currently, only 391 had birth registration capabilities.

However, Roos warned there needed to be an indigent programme to waive the DNA testing fees required to establish paternity in the case of absent fathers, or where one of the parents was a foreigner.

He said he was aware of a case where the child of a Swazi mother and South African father was not given an ID because the father could not afford a DNA test to prove the child was his. The lack of an indigent programme meant the mother and child faced generational poverty because the child would not be able to acquire education or employment without an ID. DM