BATHO PELE IN THE BIN

Road to Nowhere — a day in a Hell Affairs queue 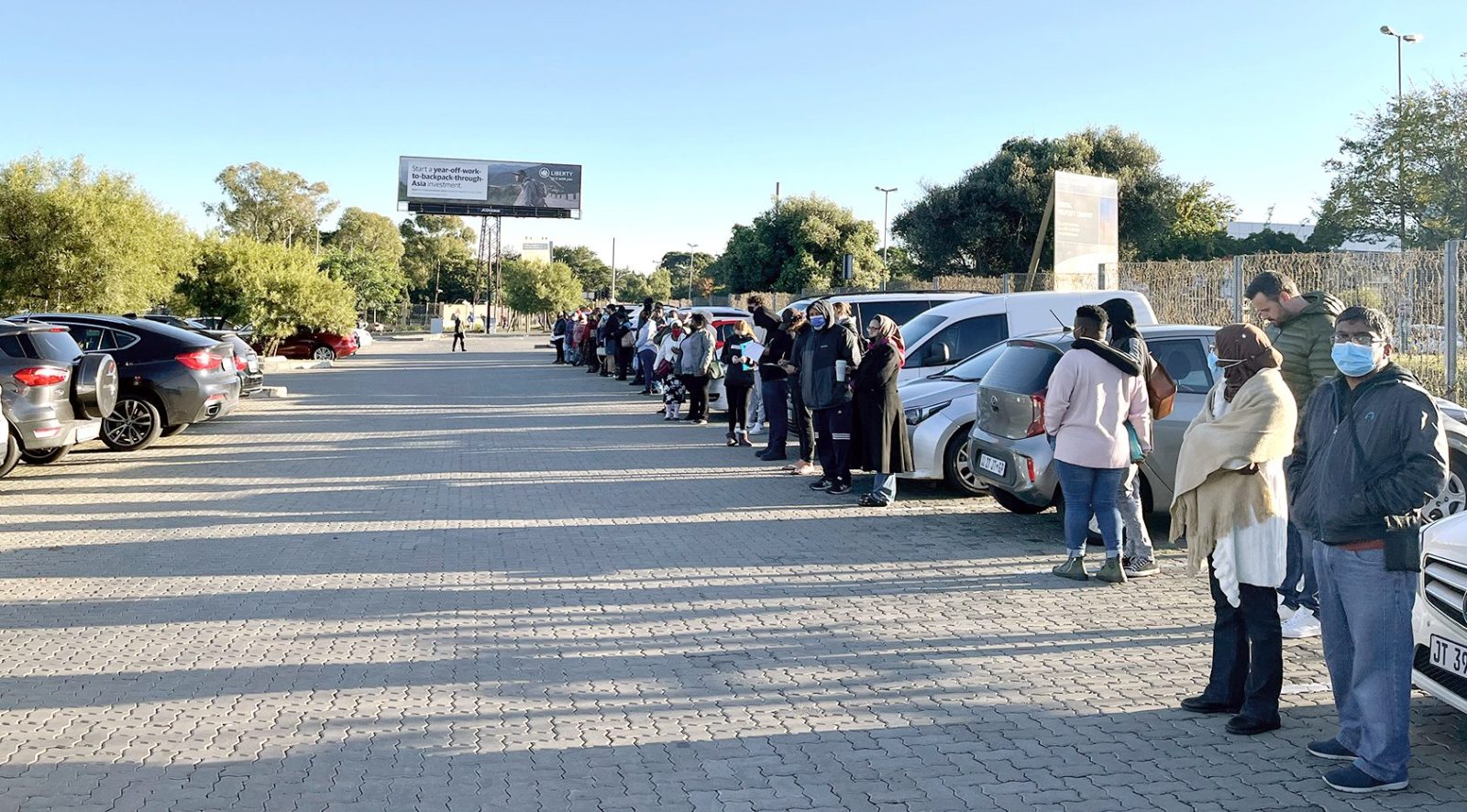 The 7am queue at Home Affairs in Randburg. (Photo: Mark Heywood)

South Africa has illusions of grandeur about being a modern, competitive country. A day or two or three in a queue at a Home Affairs office in Johannesburg should quickly (well, slowly) disabuse you of that notion. This is a story written while waiting in one of those lines.

Winter is coming. The mornings are darker and colder. Nonetheless, by the time you arrive at Home Affairs at 7am, the queue is already a hundred people long. You can see on their faces that they are in for a long day. Grim determination.

Before the gates open at 8am, an official sends a Covid-19 form down the queue. Fill in your ID number, say whether you have any symptoms and so on. You know the drill. Unfortunately, it’s about the most efficient thing that will happen to you for the next six hours. Except that it’s completely unnecessary. Like Covid fogging. Even though Home Affairs is “run” by a doctor, they didn’t get the message or the prescription.

Or maybe it’s because the department is run by a doctor.

After that, there’s no communication, no numbering system (until you get through the door, which is many hours away). Just the hum of people quietly chatting.

Some people seem to get quicker access than others. Word passes back along the queue that “they have online bookings”. But you can’t make online bookings — it doesn’t work, says one of my new queue friends.

“Most likely a backhander somewhere,” says another.

So most continue to queue in patient resignation, joking darkly about “the nightmare”. The experience adds to the cynicism and distrust of government. For all it claims, it’s not a government that cares. Batho Pele’s in the bin. But there’s no choice. You need that document. Your life and ability to function or travel depend on it.

Some clever people bring camp chairs and lunch boxes. They must have friends in low places who gave them advance warning.

During the interminable hours, some drop by the wayside and give up. I know the feeling. I was here yesterday. After five hours I gave up too. It felt like dropping out of a marathon. A harried bureaucrat had told us early in the morning that the “system is down”, but after that — silence. It seems nobody knew or cared when it would be up again.

Some arrive, see the queue and disappear.

I discovered, as I posted an SOS on Facebook, that there’s a science to finding a functional Home Affairs office. Some mention Alex. Some say Centurion. Others say take a drive to Randfontein.

But the problem is, once you are in the queue, you’re stuck. Your mind plays tricks with you. Maybe, maybe, maybe…

As you stand, sit, perch, you can understand why millions of people don’t have IDs.

And so, as my anger levels increase, I send a message to Home Affairs Minister Aaron Motsoaledi (whose number I still have from his days as Minister of Health — I’m tempted to share it, but won’t):

“Hello Minister. I hope you are well. I just wanted to say that your home affairs offices are a disgrace. I have spent eight hours so far queuing to renew my passport in Randburg. I can see no reason why it should be as inefficient and contemptuous of people as this. And I hear it’s the same everywhere. It makes me wonder what you are doing as the Minister. Maybe you ought to queue yourself one day to experience what ordinary people do.”

Several hours later I was happy to get a reply. Explaining that he was ill with flu and in bed, the good doctor said:

“I am not sure whether you are asking for my help or you just wanted me to know what you think of me. I am aware of the problems at the Randburg office and have just suspended the manager there to rebuild the office.”

Cold comfort for me and my queue buddies.

The only good thing I can say is that Home Affairs is a great leveller. In this queue are citizens with little kids, pensioners, people with big cars, people with no cars, all races, all ages. It’s where the nation meets. Everybody but politicians.

I’m left to have a solitary conversation with myself about state failure. What’s so complicated about processing, producing and disbursing ID documents and passports? If we can’t succeed with something as simple as this, how can we run a sophisticated economy and state?

As a friend pointed out, what’s to stop Home Affairs having secure online stations at their offices (like ATMs) where an applicant enters all their information so that they need less than two minutes with an official to verify their identity.

Or why doesn’t Home Affairs introduce a user rating system for its branches?

It’s at a coalface like this that you really understand the implications of State Capture, corruption and state neglect.

I don’t blame the workers. After four hours, when I made it into the actual office, the officials were reasonably personable. It’s the system that fails them. If you starve your public service and public servants, this is what you get.

The answer is MIA or being nasty and shifting blame to straw men like illegal immigrants.

All the president’s men? But do the ministers give a fuck? I doubt it. They get their blue lights, their perks and their arse-licking officials. And like the rest of them, they don’t have to queue, use the public health system or send their children to government schools. DM/MC

This article was written entirely in a queue. Having arrived at 7am, I clocked out just before 3pm. In the end, it took three minutes at the counter. My passport application was complete. But my attempt to get a Smart ID was unsuccessful because naturalised citizens are not eligible for smart IDs. Can any reader explain a good reason for that?