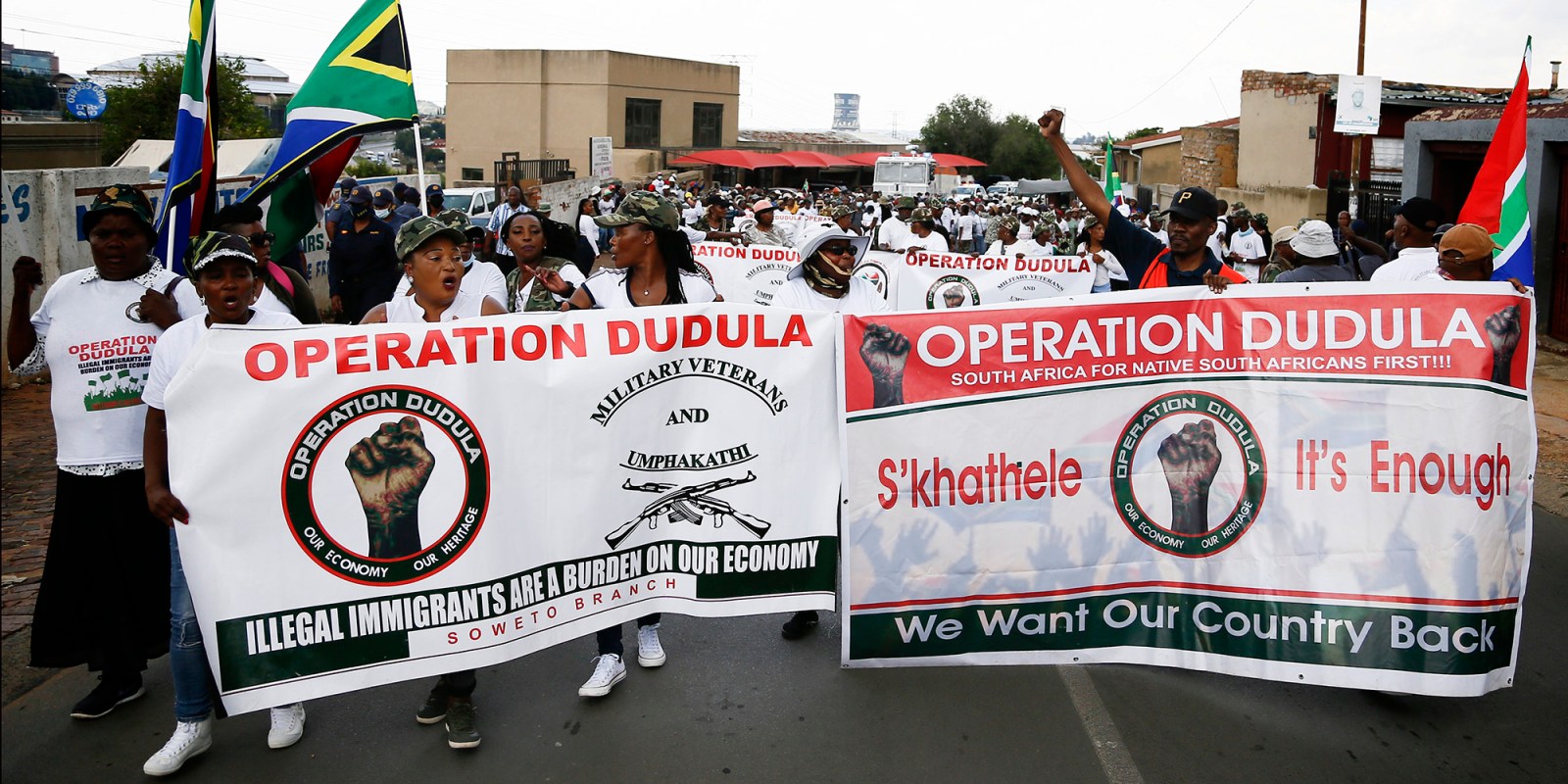 Online narratives that surfaced following the death of Zimbabwean Elvis Nyathi in Diepsloot appear to have been manipulated to sow discord between South Africans and resident foreign nationals.

From 7 April the news of the death of Elvis Nyathi inflamed social tensions around the work of Operation Dudula, a self-appointed watchdog on the issue of illegal immigrants.

The Centre for Analytics and Behavioural Change found that conversations about Nyathi were present on multiple digital platforms like YouTube, news sites and forums. However, the largest volume of conversation was found on Twitter, where posts that contained the name Elvis Nyathi reached a peak on 8 April, with almost 6,000 mentions.

The earliest reference to the name on Twitter was at 7.50am on  7 April. It was found in a post that claimed Nyathi is a clan name used in both South Africa and Zimbabwe. This information was shared along with #operationdudula, #dudulamovement and #putsouthaficansfirst. 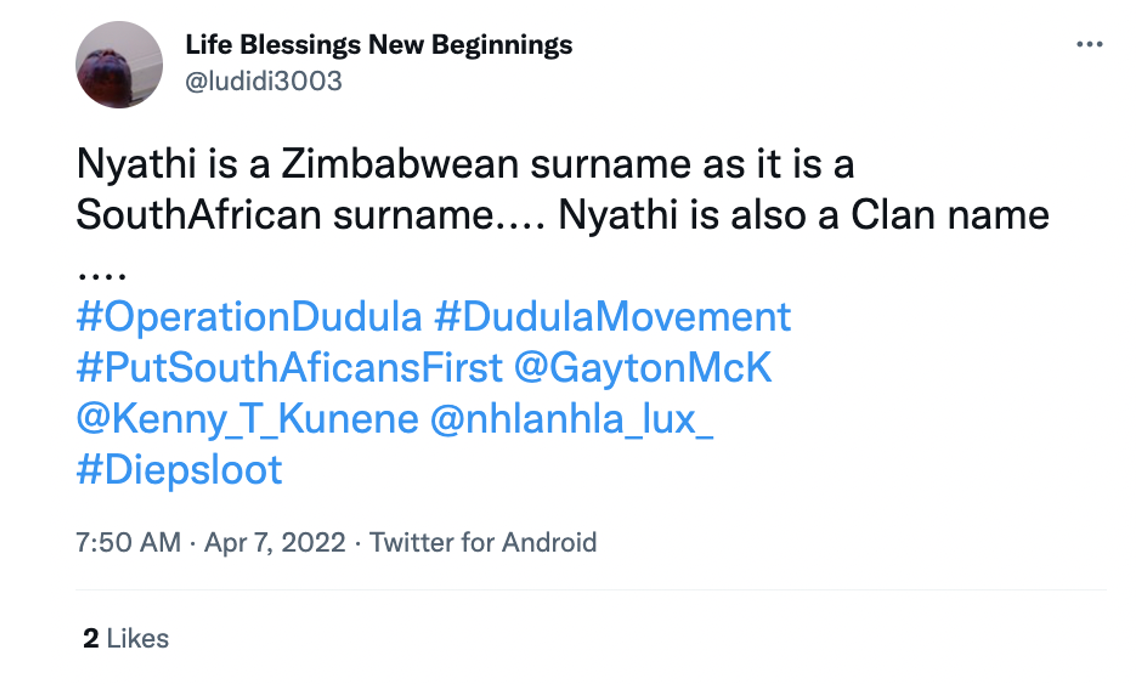 The phrase appears to have been primarily used as a keyword that was posted to amplify specific content.

The Tembisa 10 trend appeared on the day that the SA National Editors’ Forum labelled the story of the Tembisa 10 as ludicrous and an embarrassment to South African journalism. It is clear that keywords like #OperationDudula or #SenzoMeyiwa were not used. This may have been done to manipulate the Twitter algorithm that groups content based on the keywords.

Graphic content was shared on various media platforms as South Africans and foreigners tried to understand how such a violent hate crime could have taken place.

The verified account of Professor Jonathan Moyo posted an image of the graphic content that was shared on SABC News about Nyathi’s death and referred to the act as “Afrophobia”. Moyo is Zimbabwe’s former minister of higher and tertiary education, science and technology development.

Reflecting this thought, the project director of the Nigerian social advocacy group Connect Hub NG tweeted: “South Africans are not angry at immigrants. They are only angry at African immigrants”. This post received more than 7,000 likes and over 1,600 retweets. These figures are far higher than the posts that were used to amplify hashtags like #operationdudula and #putsouthaficansfirst (misspelt in the data).

This implies that more unique Twitter account holders resonated with the type of message in Figure 6 than they did with the content that was being amplified in a more coordinated way about Operation Dudula and Nyathi.

Responding to the Connect Hub project director, @AndreaBastoni tweeted: “I hope Operation Dudula soldiers find you and deal with you the way they did with Mr Nyathi”. This was counter to the information that another account that regularly tweets content relating to the Put South Africans First movement put out, stating: “There is no link between OD and the incident at Diepsloot”. 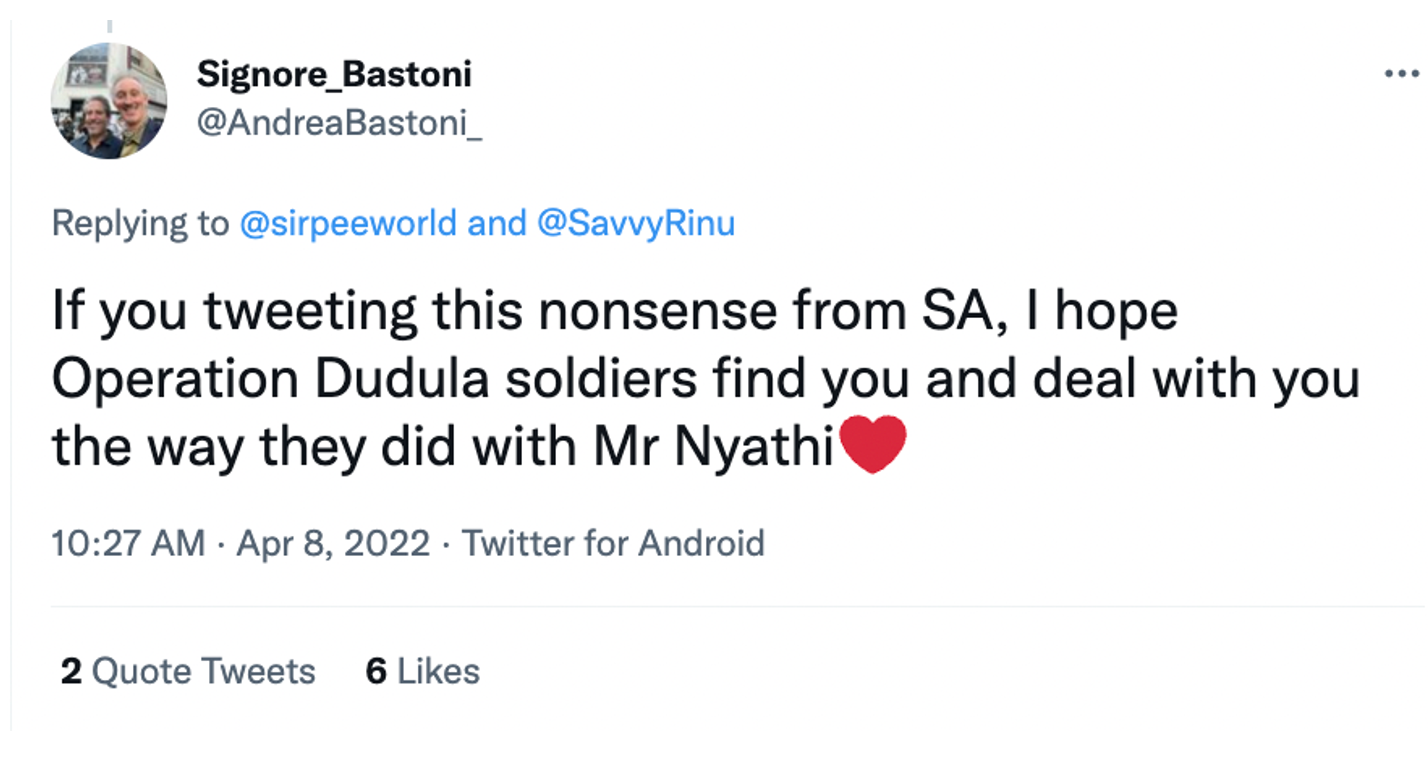 Looking closer at the @AndreaBastoni account, which is open to the public on Twitter (Figure 9), the nationality of this account holder as Italian is questionable as the account mostly retweets obscure South African content that is in English or one of the official South African languages (Figure 10). Furthermore, the location of the account has been listed as Polokwane. 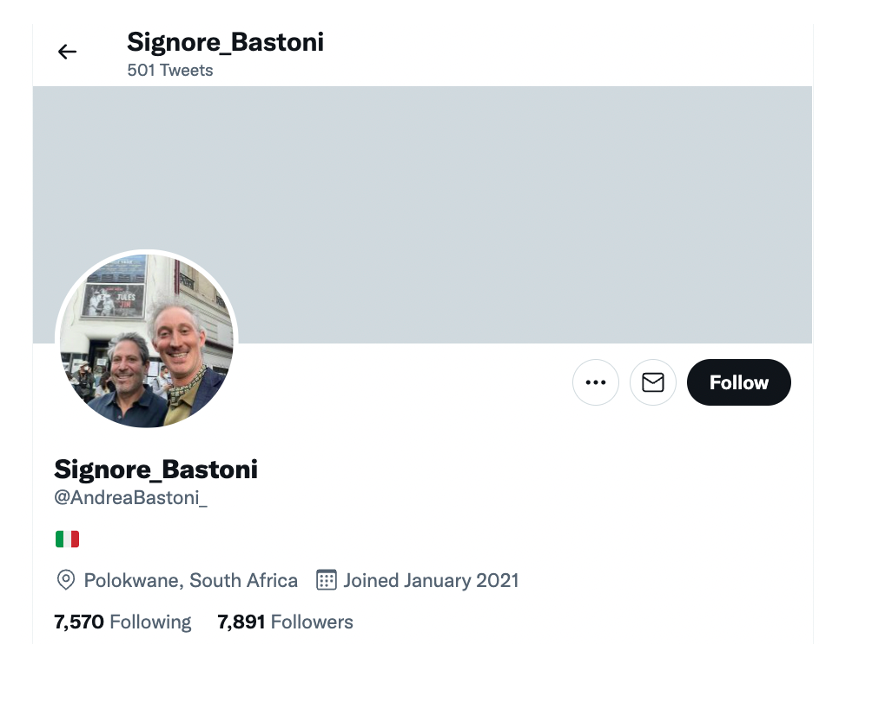 Among the graphic content that was shared, a video was posted of a man being beaten with sticks and set alight as community members stood in a circle and watched the torture. The person posting the video asked: “Is this the guy?” It is not clear if this is really a video of Nyathi or a video of another incident.

Another tweet about Nyathi, which received more than 2,000 likes, and was retweeted by South African author and political analyst Eusebius McKaiser, said that Nyathi and his nephew Felix specialised in “smart gardening” in their spare time.

This information runs counter to the narrative that Nyathi was a drug dealer in the community of Diepsloot who was attacked because citizens were tired that nothing was being done to stop his alleged criminal activities.

A topic that also trended within the Nyathi conversation on Twitter was that of seven people who lost their lives. Based on the trending topics shown in Figure 3 above, phrases like “7 south africans” and “killed 7 women” were driven in posts that claimed that seven South Africans were killed by foreigners.

On 6 April, News24 reported that seven South Africans were murdered over the weekend beginning on 1 April. On the same day, SowetanLIVE reported that seven people (no nationalities given) were murdered over the same weekend. The article states that 200 protesters then gathered outside Diepsloot police station to address Police Minister Bheki Cele about these and other criminal incidents that were plaguing the community. During an address at the protest, Cele said: “For the past weekend, approximately seven people were killed in the area, which then prompted the unrest.” In the aftermath of the protest, Nyathi was burned alive.

On 7 April, The Citizen reported that four people were murdered over the weekend beginning on 1 April. Newly elected Police Commissioner Fannie Masemola stated “…we are aware that there are four people murdered”. On 10 April, Daily Maverick reported that six people had been killed in Diepsloot over the past few weeks, including Nyathi.

The conflicting number and nationalities of people murdered in Diepsloot over the weekend beginning on 1 April in reports by the media and the SA Police Service have led to confusion. The exact timelines and locations of when and where these murders took place appear to be uncertain, with sources reporting them to have occurred over the first weekend of April and others over the past few weeks.

It is also not clear if all of the murders occurred within Diepsloot itself or if surrounding areas were included.

A digital response to these claims from an account associated with the EFF asked for an investigation into the news to ensure that the story hadn’t been cooked up.

An inspection of the hashtags that were trending within posts about xenophobia, foreigners and immigrants between 5 and 10 April shows the top 10 hashtags. The size of the word in the image below indicates its volume relative to the surrounding hashtags.

The first theme that stood out was an attack on the media and the EFF. Raking in thousands of likes and retweets, tweets like those seen in figures 18 and 19 below tried to paint the picture that South African media can’t be trusted because they are not covering events that appeared to be of concern to those tweeting #operationdudula. 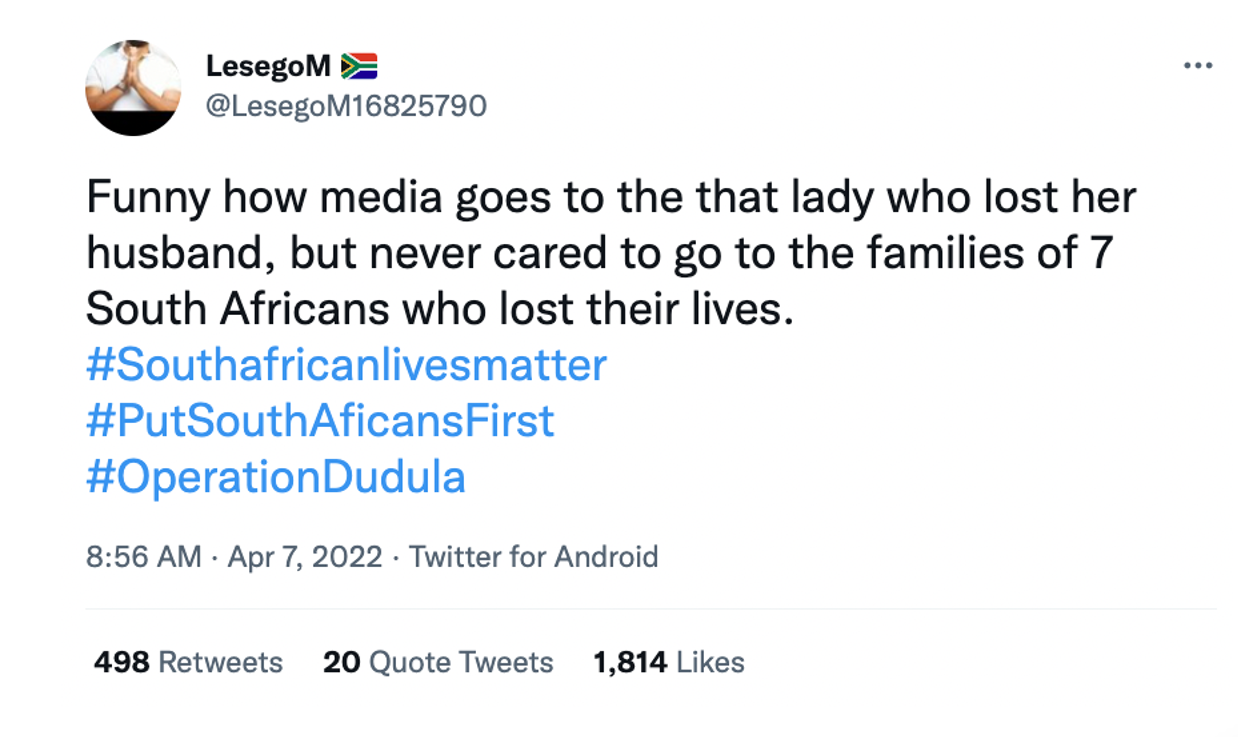 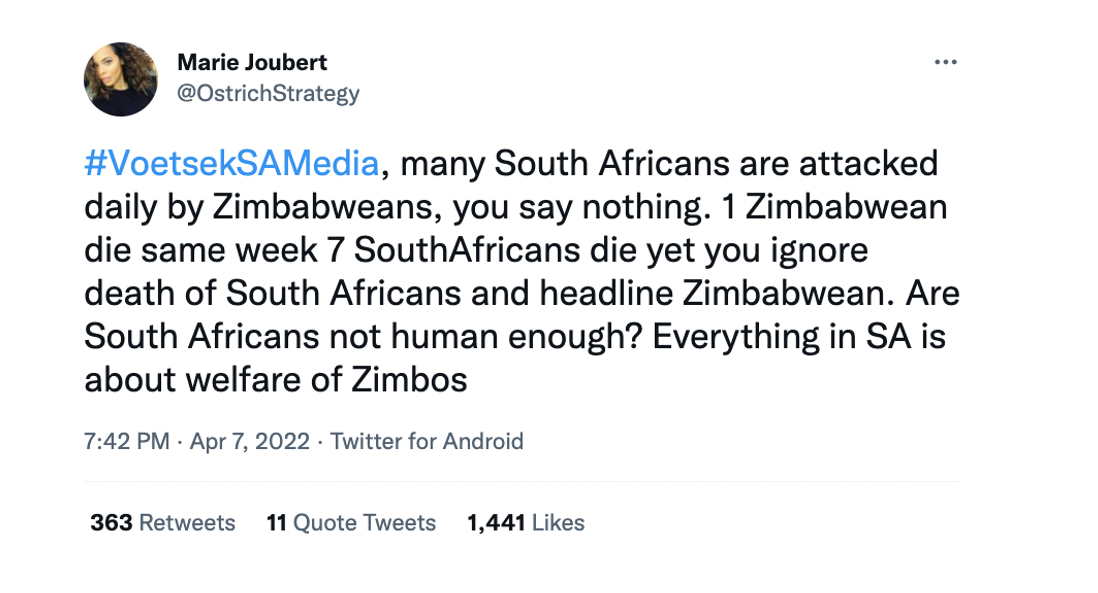 The claims that certain media houses do not cover important stories as they unfold also took place during the riots and looting last July. Messages like those shown in figures 21 and 22 below are examples of such posts from July 2021. 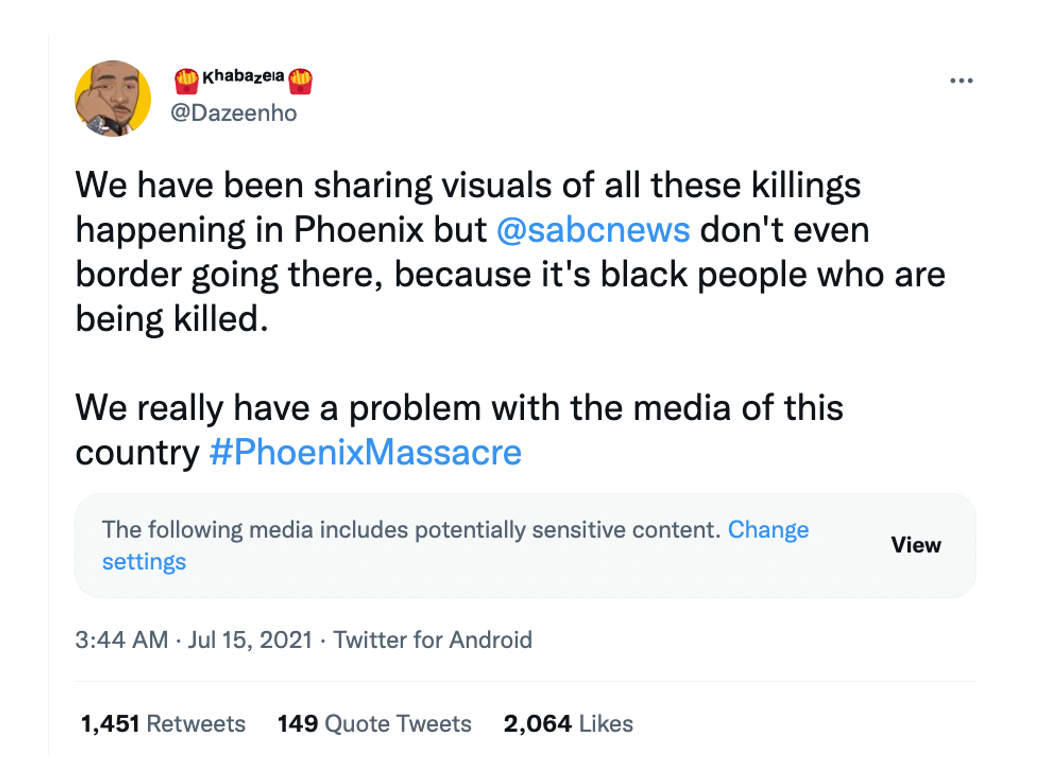 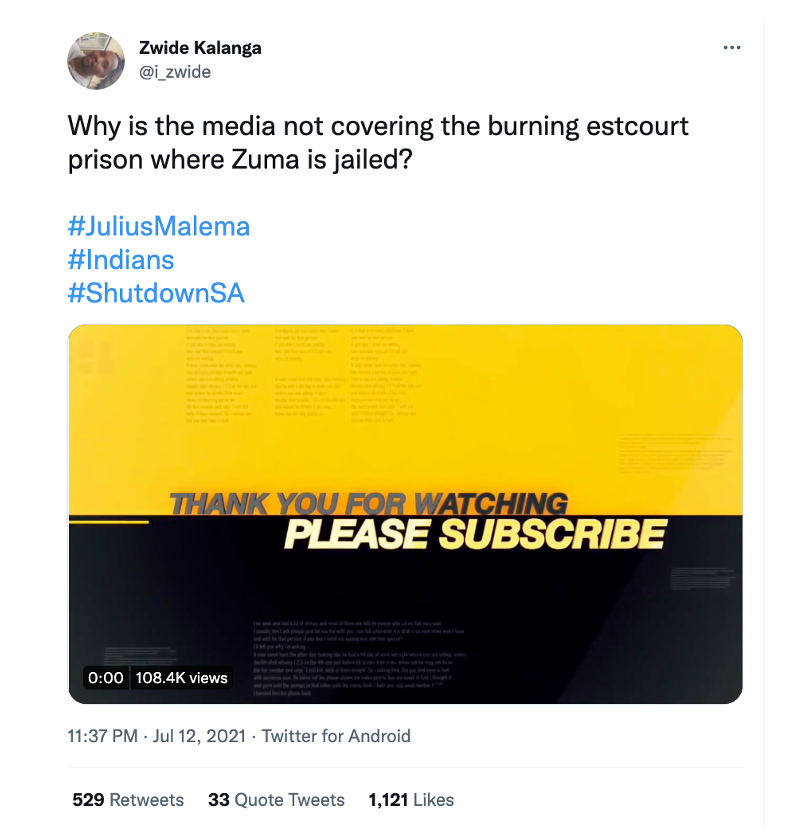 Another clear theme that emerged from the hashtags was individual stories that don’t appear to have been confirmed by any official body. These posts reported on incidents of crime that were allegedly carried out by foreigners. The topics that they covered appeared to be focused on existing weaknesses in society, like drugs, the murder of a police official, fraud using South African ID numbers to access Sassa grants and the hijacking and recovery of a stolen Toyota Hilux by someone allegedly driving toward the Zimbabwean border.

No evidence was offered to prove any of the accusations made in these posts.

As uncertainty around the message of the death of seven people prevailed, this lack of knowledge was used to manipulate online discourse surrounding the death of Nyathi and potentially present a justification for his killing by a mob outside the police station at Diepsloot.

While the protesters are said to have gathered to address service delivery issues in the area, online the protest and its fallout were driven by hashtags like #OperationDudula and #PutSouthAfricansFirst. DM

The Centre for Analytics and Behavioural Change (CABC) is a non-profit organisation established to track and counter misinformation and disinformation, fake news and divisive and polarising rhetoric that is promulgated online to undermine social cohesion, democratic integrity, and the stability of nation-states.