Stellenbosch waiting game — Is this among the worst Home Affairs offices in South Africa? 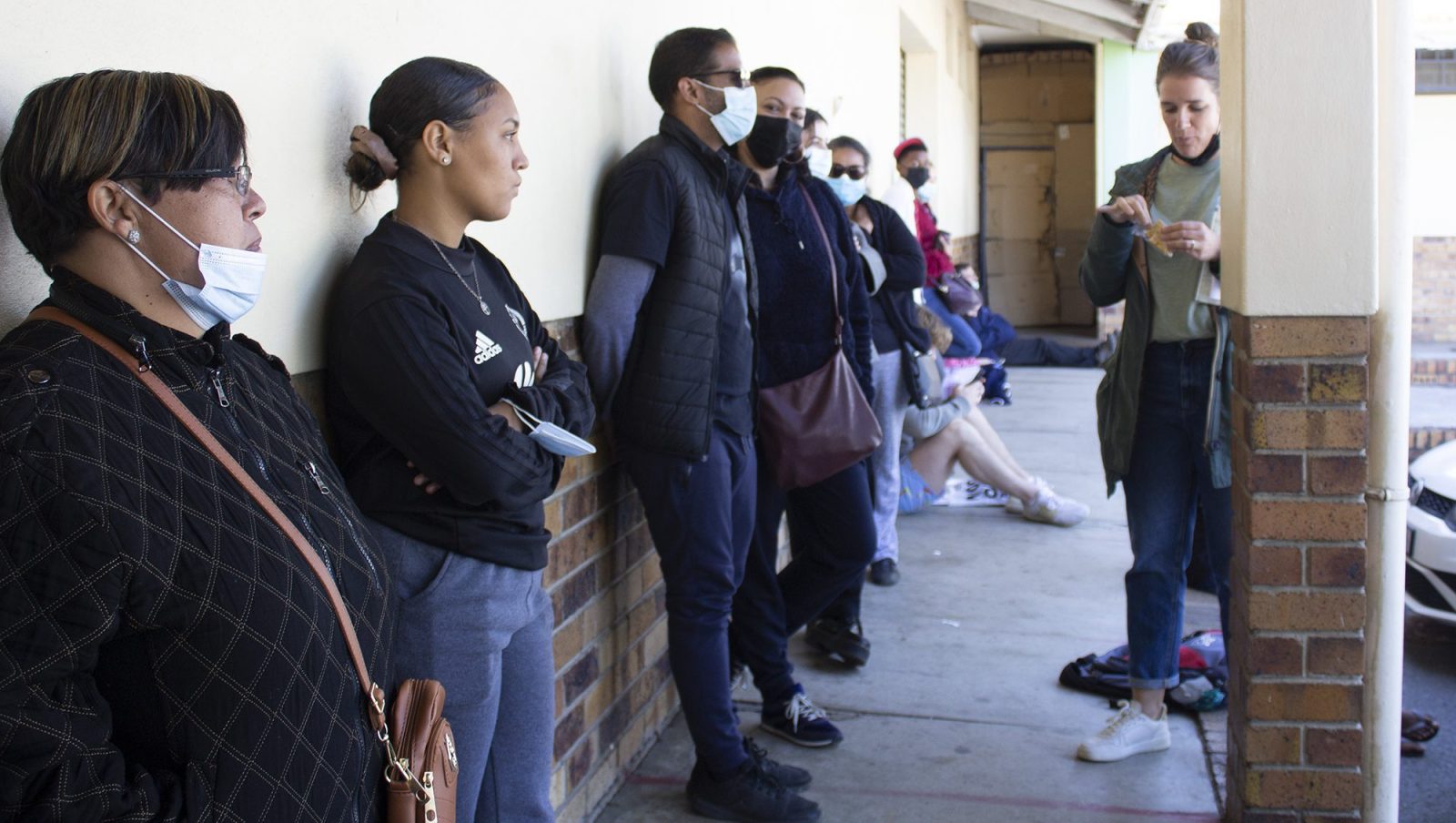 In a relatively well-run town like Stellenbosch in the Western Cape, its Home Affairs is close to collapse, reportedly operating with a staff capacity of less than 15%. The office shares consistent problems with other Home Affairs offices across the country.

It is 11.16 am and exhaustion hangs in the air. Many people have been in the line that snakes around the Stellenbosch Home Affairs office for almost four hours.

Those sitting at the front arrived at 7am, but haven’t moved an inch since the doors opened an hour and a half later. Being at the front of this line doesn’t offer anyone hope. There are no indications that the end is in sight.

There are almost 20 people inside the office. But “who knows what time they came,” a woman, who asked to be known as LJ, says while standing in the ID and passport queue. “Everyone’s time is worth more than standing in a Home Affairs line, no matter what you have to do.”

According to the auditor-general report 2020/21, Stellenbosch is one of the better-run towns in the country, but it is not spared from the problems at its Home Affairs offices experienced across the country (read here, here and here).

A series of questions to Home Affairs Minister Dr Aaron Motsoaledi on 25 February, from Democratic Alliance (DA) constituency head for Stellenbosch Municipality Leon Schreiber, led the minister to admit that the Stellenbosch Home Affairs office is close to outright collapse.

Two major issues, among other problems, cripple this particular office: it is heavily understaffed and the building and surroundings where people must stand to queue are unkept and a health hazard.

Staff shortages are part of a nationwide problem, with Motsoaledi replying to queries in March this year that shortages are a result of continuous budget cuts from the National Treasury.

The department requested an additional R266-million for employment compensation from the Treasury to fill 762 vacant posts (427 for civic services, 328 for immigration services and seven for information services), according to its annual performance presentation plan on 26 April.

According to the Department of Home Affairs’ Annual Report 2020/2021, staff shortages were one of the fundamental and unsolved issues it faced in strategically managing long queues. Shortages were also flagged for hampering service delivery in the department’s annual report 2008/2009.

At the Stellenbosch Home Affairs office, people must stand amid a growing stench that comes from a leaking bathroom pipe just a few feet from the queue. Cigarette butts, dirt, and even an old nappy litter the area.

Some of the unprepared must sit on this ground because there are no chairs provided.

But by the looks of it, most of the 40 or so people who stand outside have not walked into this blind. People sit on camping chairs brought from home, some with laptops out for work while others are attending their lectures online. Some have taken the day off and brought a book with them to pass the time — any attempt to make this stakeout comfortable.

Others gawk around, suffering absolute boredom — a waste of a day. People question why the hassle, apart from biometrics, cannot be done online in 2022.

A spirited joke makes its way around the queue: “If only they had put out a food stand here, they would make a lot more money! They may as well have made it lekker”.

Defeated laughter goes around in response because everyone here knows they will be stuck in this line for the day. Some might need to come back tomorrow too.

According to Schreiber, the office should have 41 officials working at the office to tend to the needs of the community.

“The office currently only has six staff members, meaning that it is operating at only 14% of its capacity,” said Schreiber. On two visits to the office, Daily Maverick saw only four officials at work.

An admin clerk working at the Stellenbosch Home Affairs office, who asked not to be named to protect her job, told Daily Maverick that, “there are only four of us here a day and when two of us are sick, then it is chaotic and impossible”.

According to Schreiber, the DA will “shortly launch a formal petition to Parliament calling for the Stellenbosch Home Affairs office to be fully capacitated”.

“[Once submitted, it] will force the Department of Home Affairs to appear before Parliament and account for the way in which they have let down the people of Stellenbosch,” Schreiber says.

According to Leslie Williams, manager at the Stellenbosch Home Affairs office, between 300 and 400 people queue there daily. “It differs,” he says. The office — only 406 square metres in area, is also four times too small to properly serve the community.

Some people are so frustrated that they are willing to step in to alleviate the pressure.

“If they are really so understaffed, open up doors for employment… I’ll even step in and work here — I’ll do it now,” said Abbalisha Pearce.

Pearce’s husband, Brendon Pearce, adds, “what happens now at 3:30 [pm] when the office closes? They are going to go home even if we are still standing here. They aren’t going to stay here.”

A few people have strategically come to this office, avoiding the Paarl and Bellville offices, only to find that similar issues prevail.

At around 11am, a sign goes up near the end of the line, stating that the office has reached full capacity. Anyone coming later than 11am would need to come back another day.

For a substantial period between 8.30 am, when the office opens, and midday, the system is offline.

“Not one official came out to inform us [at the back] what is happening, it would be hugely helpful if they did,” said a man, who asked to be referred to only as Marius, standing in the queue with his daughter, who should be in school.

Someone in the line had to go into the office to ask what was happening to find out that the system was offline.

Only the people at the front of the queue were told when they arrived that the system was offline.

“There was hope, and then I was quickly disappointed,” said Jesse Jones, who had been in line for his passport since 7am.

According to the admin clerk at the office, this is the norm. It takes about 15 minutes to open a document on the system.

When people in line eventually hear that the system is offline, no one moves. “That shows you that people are used to the system not working, but they have invested this time now to come here,” said a woman who didn’t want to be named.

After 12pm, cheers are heard from the queue. The system has come back online; someone has checked on their phone.

According to Ceinwen Smith, standing in the queue “hopefully” for both her ID and passport, it seems as if the staff’s hands are tied. “They are not given agency to do anything. That just speaks to the whole system.”

This was especially true for the leaking pipe coming from the bathroom. According to the admin clerk, it has been leaking for months.

“We have been complaining about this [to the Department of Home Affairs and Public Works] over and over again,” she said. Nothing has been done. When Daily Maverick asked, “why not call a plumber?”,  she shrugged.

Small problems that could easily be fixed, like toilets continually leaking water because handles are absent or broken, persist.

Additionally, none of the toilet doors at the office — excluding those that weren’t out of order — could be locked.

“You feel unsafe because the toilets are unisex,” Smith says.

“There is no attempt to make this situation any better,” she says. Pretorius  is working as she waits, with her power bank at hand.

“This is where we interact with our government,” Pretorius says. “If this is how they treat the people of South Africa, it doesn’t offer any hope.”

The Stellenbosch Home Affairs office is under the custodianship of the Department of Public Works and Infrastructure.

According to Thami Mchunu, spokesperson at the Department of Public Works and Infrastructure, the department is unaware of the infrastructure issues, including the leaking bathroom pipe, at the Stellenbosch Home Affairs office.

“The department will, however, investigate and attend to the matter now that it has been brought under its attention,” Mchunu said. DM

The Department of Home Affairs had more than a week to respond to Daily Maverick’s queries, with five follow-up prompts, none of which yielded a result.

Leslie Williams, manager at the Stellenbosch Home Affairs office, declined to give an official comment, but said: “People inform us of the problems, and we are aware of it. We take it up to the next level — the ones we cannot deal with.”

This article will be updated if and when any response lands.