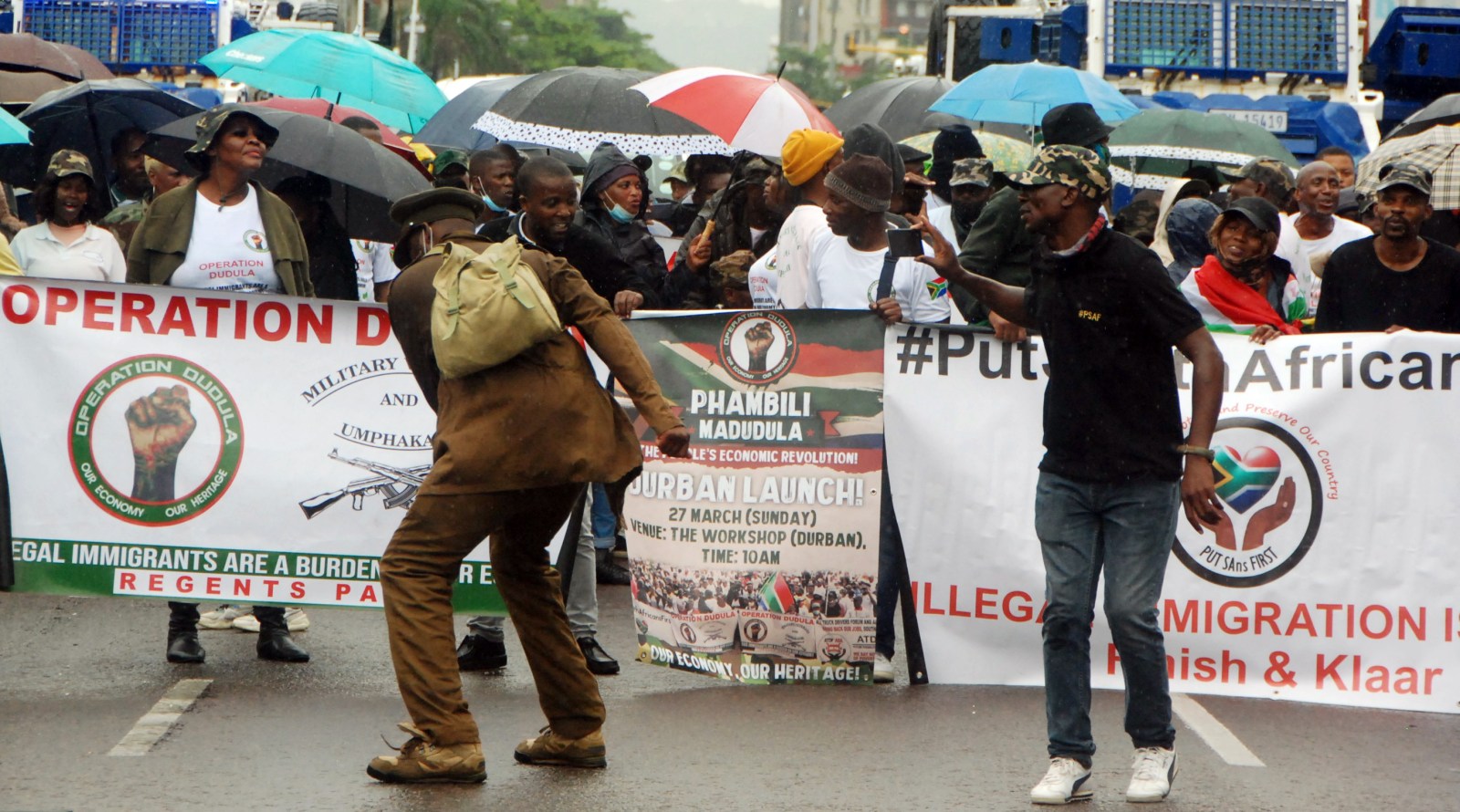 Members of the Operation Dudula movement march along Pixley Kaseme to Mahatma Gandhi streets in Durban to hand over a memorandum at the police station on 10 March 2022. (Photo: Phumlani Thabethe)

Instead of the ‘mother of all marches’, Operation Dudula’s launch in KwaZulu-Natal was attended by just a few dozen people, many of whom were bused in from Gauteng.

Operation Dudula organisers had promised a “mother of all marches” in Durban in the lead-up to Sunday, 10 April 2022. Instead, the crowd was made up of dozens of people transported in two buses and several taxis from Gauteng to Durban, with only a handful of people from Durban.

Operation Dudula has been causing chaos in the country, especially in Gauteng. It started just a few months after the July 2021 riots, stirring up anti-immigrant rhetoric on social media networks and later moving to physical campaigns and marches.

Its leader, Nhlanhla “Lux” Dlamini, known as Nhlanhla Lux, was arrested in March after he led a march to “root out drug dealers” in Soweto. He appeared before the Roodepoort Magistrates’ Court on charges of housebreaking, theft and malicious damage to property. He was granted R1,500 bail after spending the weekend in custody.

Lux was not at the Durban march. Police – who outnumbered the marchers by more than three to one – watched the proceeding with Nyalas, riot vehicles and other equipment as marchers made their way from the Durban city centre through the Point area and down to the Point Police Station, where they handed over their memorandum.

In Mahatma Gandhi Road, police had their hands full when pandemonium broke out after some people in the surrounding apartment buildings threw stones, bottles and water bottles on to the marchers. The marchers threatened to force their way into the apartments, but they were stopped by police.

Among the marchers was 43-year-old Durban resident Sbusiso Dlamini, who said he had recently joined Operation Dudula. He said he was attracted by its actions, especially its demand that the government implement immigration policies that it said would see many undocumented foreign nationals leave South Africa.

“Here in Point, drugs are peddled day and night, prostitution and human trafficking is the order of the day, yet nobody is arrested,” he said.

Joan Mbhele, a 67-year-old marcher, said she had travelled by bus from Soweto to support the march. She is an executive member of Put South Africans First, which is in an alliance with Operation Dudula and other like-minded organisations.

She claimed that South Africa’s townships, hospitals and job market were being “swarmed” by undocumented foreign nationals.

“This is fake democracy, which puts the lives and wellbeing of foreign nationals ahead of South Africans. We live in the township, where locals cannot do anything. Every opportunity is grabbed by foreign nationals. Most of them are undocumented and when they commit crime, they run away to other areas and they cannot be traced or detected,” she said.

Closed for the march

Many of the shops and businesses owned by immigrants near the Point area were closed for most of the morning ahead of the march. During the march, scores of Point residents – locals and migrants – stood in the street, watching as military-attired marchers made their way past.

Billal Ahmed, a Pakistani national who manages a chicken restaurant in the area, said they had been warned to close their shops.

“We were told that vigilantes are coming,” he said. “We will open again after the march.”

Clothing shops near the Durban beachfront were also closed. A Senegalese man who runs a small shop said he had also been warned to steer clear of the business. He asked not to be named for fear of being targeted.

“We hear that it is a march by South Africans who are claiming that foreigners are criminals, drug dealers. But here, we don’t sell any drugs. We are making a legitimate living,” he said.

Marchers made their way to the Point police station, singing, dancing and chanting anti-immigrant slogans. They handed over a memorandum with a list of demands that was received by the police and Home Affairs officials.

Andrew Dikobo, a Home Affairs official, accepted the memorandum on behalf of the minister and said he would pass it on.

Brigadier Nelly Ngubane, commissioner of the Point Police Station, denied that officers from her station received bribes from drug traffickers and other criminals to turn a blind eye to acts of criminality in the area.

Zandile Dabula, Operation Dudula’s general secretary, said: “We have many demands … We are calling on the President and the minister of employment and labour to prioritise South Africans for job and economic opportunities as per the Immigration Act and section 8 of the Employment Services Act.”

She said there will be many other Operation Dudula activities in KwaZulu-Natal. “Every [KZN] town and township must have an Operation Dudula branch. We are saying it is important for every township to determine its own agenda and priorities.” DM