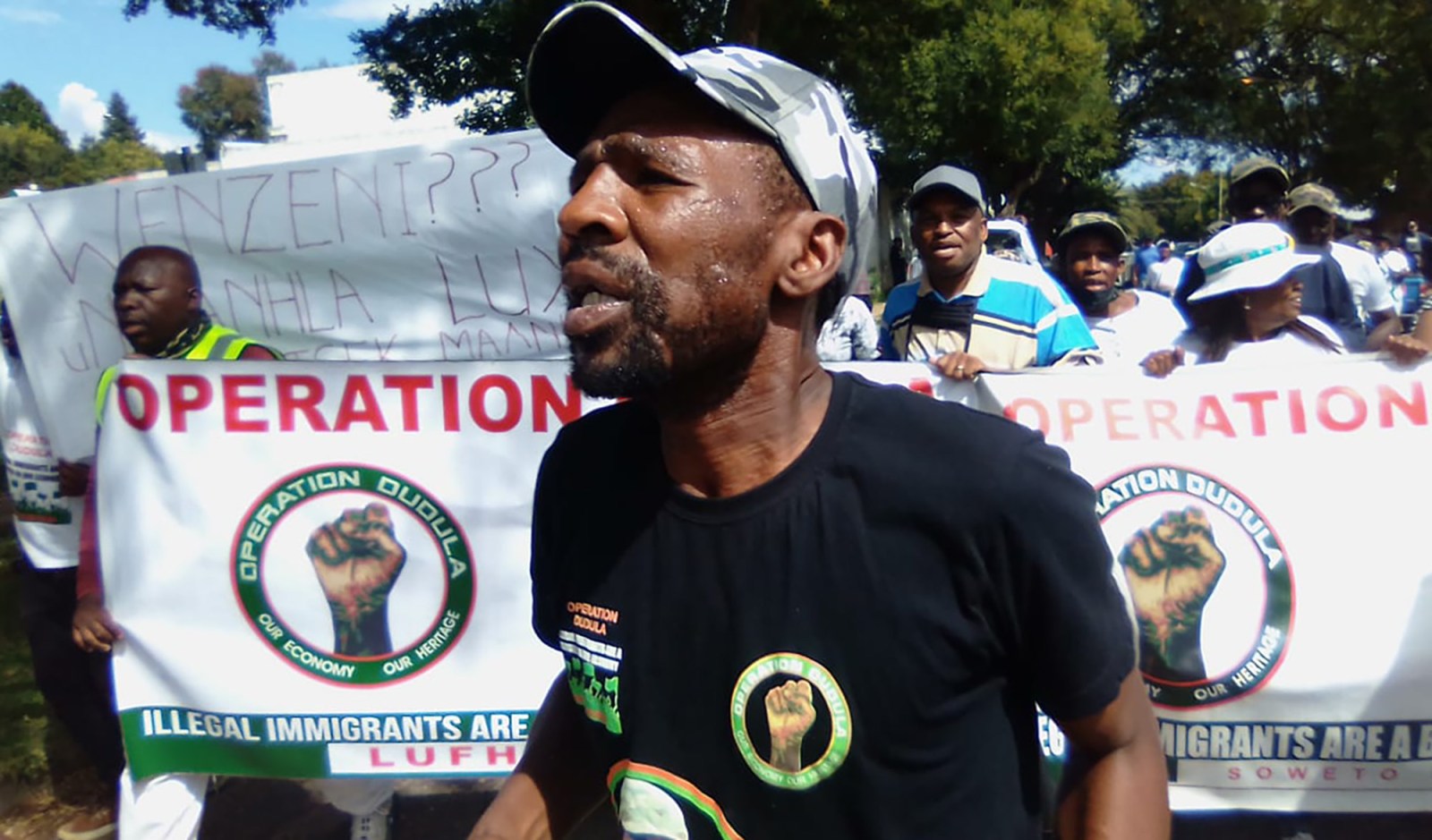 The head of the anti-foreigner group, Nhlanhla ‘Lux’ Dlamini, has been remanded in custody until Monday. The controversial figure faces various charges for allegedly invading the house of Victor Ramerafe in Soweto.

A case against Nhlanhla ‘Lux’ Dlamini (known as Nhlanhla Lux) was opened at the Dobsonville police station on Wednesday. The complainant, Victor Ramerafe was supported in opening the case by the Economic Freedom (EFF), by virtue of his membership with the party.

“These are political proceedings, even yesterday I mentioned that we were ready to proceed today but somewhere the decisions came from the top that they are not ready. They probably want to add other charges,” Lux’s legal representative Advocate Ike Khumalo told Daily Maverick on Friday morning.

He was outside the Roodepoort Magistrate’s Court, as it had been anticipated that Lux would appear.

Khumalo said the charges against Lux include housebreaking, theft and malicious damage to property. Khumalo said he heard speculation that a further charge of intimidation was to be added.

Khumalo explained that the matter was urgent and Lux should have appeared in court. “In an urgent matter you have to deal with the urgency of the matter first,” he said.

Regarding Lux’s well-being, Khumalo said, “He is fine. He is the Nhlanhla Lux that you know, we saw him yesterday and he was appealing for calm.”

Lux, from Soweto, emerged last year on youth day as one of the leaders of Operation Dudula. The father of three is also credited for protecting the Maponya mall from looters during the unrest last year in July.

The case against Lux stems from a raid by Lux and his Operation Dudula (OD) members on Ramerafe’s Dobsonville home, which community members had claimed was involved in illegal drug activity. Ramerafe said Lux manhandled him during the futile search for drugs. He also accused the group of breaking into his house and stealing money and a cellphone.

When asked why Lux was detained in Johannesburg Central Police Station when the case was reported in Dobsonville, Khumalo claimed this was probably done to intimidate his client. But he added: “Authorities said they were scared because the community of Soweto would protest and intimidate the police.”

Khumalo said he only found out yesterday (Thursday) that his client would be detained at “John Vorster Square” (the name of the prison during apartheid). Khumalo said Lux had not reported any intimidation but added that he would be consulting all weekend.

“We don’t think the charges will stand but we will test that in court. We think he is innocent and we have sufficient proof of this,” said Khumalo.

He said the charges were laughable because even the Dobsonville community were adamant that Ramerafe sells nyaope in the area.

“We think that he was put under duress by the EFF. It’s unfortunate that the EFF have accompanied the man who is a drug dealer when we are fighting drugs in our communities.”

About 100 supporters gathered at the nearest car park at the Roodepoort Magistrate’s Court and sang various songs, some berating the EFF.

Journalists came under fire, while the group’s leaders muzzled supporters from speaking to the media.

“If you will respond to the media you must have guys. The media will say they have information from you and use it against us. The matter is now with the Director of Public Prosecutions, the media must approach that office,” one leader said.

Updating supporters early on in the morning, Operation Dudula General Secretary Zandile Dabula said prosecutors were negotiating with police whether to release Lux on Friday or Monday. “In the meantime, let us maintain high discipline and high morale,” said Dabula.

“We don’t know what’s going to happen if they keep him until Monday because South Africans are very angry,” added Dabula.

Dabula also announced at the court that the group would be in Durban at the weekend.

Daily Maverick gathered that security was a key concern that may have impacted on the decision for Lux to not appear in court. A court official was overheard around 10.40 am saying: “The docket is not even here. The guy was arrested only yesterday. We will quietly bring him to court when the journalists and others least expect it.”

As soon as it became clear that Lux would not appear, and his supporters were alerted to this, they demanded to go to the police station where he was being held.

Upon arrival, Operation Dudula supporters continued singing. The group vowed to sleep on the police station’s doorstep if their leader was not released despite admitting that Lux’s lawyer Khumalo had advised against gathering at the police station.

Lux’s arrest comes amid a surge in threats and campaigns against foreigners living and working in South Africa.

It has prompted a backlash from civic groups, with a march being held in Johannesburg on Saturday.