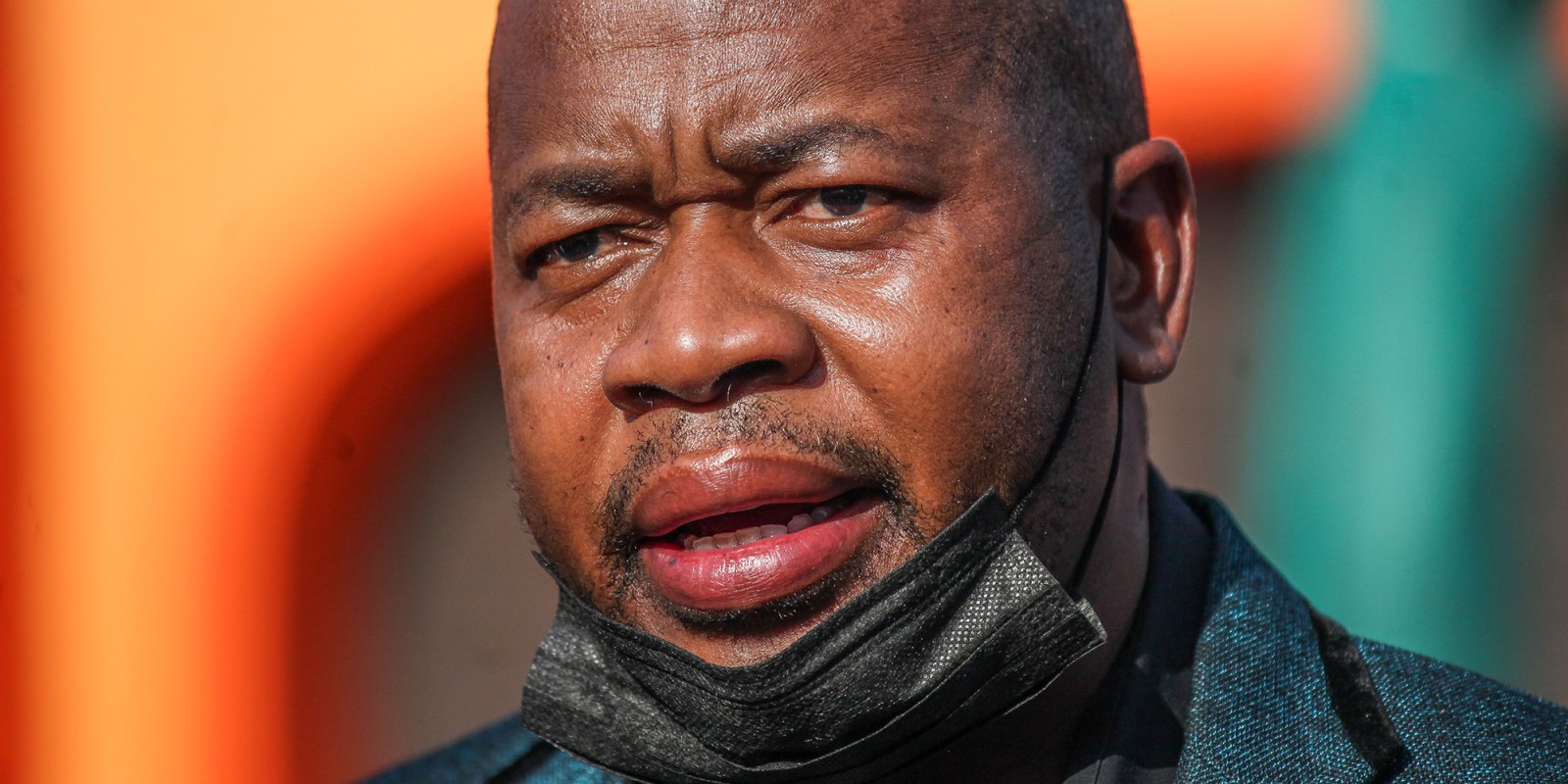 The ANC and DA are embroiled in a council tiff that has delayed strategic decision-making following former Ekurhuleni mayor Mzwandile Masina’s removal from chambers last Thursday after he was accused of disrupting proceedings.

Former Ekurhuleni mayor Mzwandile Masina told Daily Maverick on Monday that he is awaiting a medical report before deciding whether to lay criminal charges against mayor Tania Campbell and council speaker Raymond Dhlamini.

The ANC accused Dhlamini on Friday of resorting to “apartheid bullying tactics” in his move to have Masina removed from council chambers.

Masina lost his position as mayor and is now reduced to leading the opposition ANC caucus after the party lost its grip on the Gauteng metro in the November 2021 local government elections.

The City of Ekurhuleni is now run by a DA-led coalition government, after the DA’s Tania Campbell defeated Masina and secured her position as mayor of Ekurhuleni with the help of coalition parties including the EFF and ActionSA.

On Wednesday, 30 March, Campbell gave her State of the City Address in which she announced a plan to go “back to basics” and tackle service delivery and inclusive growth to ensure the recovery of the City, which has been hammered by Covid-19 and maladministration.

The following day, the council debate on the State of the City and subsequent council meeting came to an abrupt end when Masina and the ANC caucus whip in Ekurhuleni, Jongizizwe Dlabathi, were forcefully removed from council chambers by Ekurhuleni Metro Police.

A video clip of Masina being hauled out by law enforcement went viral on social media, along with another of him outside chambers with his shirt and waistcoat crumpled, appearing dishevelled.

A video has been circulating showing former Ekurhuleni mayor Mzwandile Masina being removed from council chambers. @iamthabomdluli speaks to Masina and gets clarity. #Newzroom405

Speaking to Newzroom Afrika after the incident on Thursday, Masina said he was removed for interrogating the mayor about why questions for written reply had not reached members of the council.

“We presented, as the ANC-led caucus, the alternative State of the City Address, which annoyed the mayor. She had no alternative but to call the bouncers to remove us from the chamber,” Masina told Newzroom Afrika’s Thabo Mdluli.

Masina claimed the meeting collapsed because council speaker Dhlamini wanted council officials to lie about receipt of questions which they had not received.

“I was badly beaten… and I’m still ashamed that as an elected public representative I could be manhandled that way,” Masina told Newzroom Afrika.

Masina added that he intended opening a case of assault against Dhlamini, Campbell and the MEC of police the following day.

However, in response to Daily Maverick’s queries on Monday, Masina said he had not yet laid charges.

“[I am] awaiting a medical report which I’ll receive today and make a final decision whether or not to open the case,” he told said.

They ‘wanted to disrupt proceedings’

Dhlamini denies Masina’s claims, saying Masina and Dlabathi were removed from the chambers on his instructions after disrupting the proceedings.

“The mayor received written questions which [she] responded to in writing and sent back the replies to be shared to all councillors. Masina’s case was that he didn’t receive the replies. Even if that were the case, this is a question to be addressed with myself as speaker of council and not with the mayor. When I tried explaining to Masina, it became clear that they were not interested in my explanation but wanted to disrupt council proceedings, which would be for the second time on the same day,” Dhlamini told Daily Maverick.

As council speaker, Dhlamini said he gave the ANC “ample time and chances to conduct themselves in an orderly manner”, and after disregarding his requests for order he asked Masina and Dlabathi to leave the chambers.

“They still refused, which halted the business of the council. I then, in terms of rule 66(2) called in the council protection services to assist [and] was shocked when the ANC caucus resisted the instructions of the unit,” he said.

On Friday, 1 April, the office of the mayor issued a statement condemning the ANC’s obstruction of business during Thursday’s council sitting, saying it was not the first time this year that the council had seen disruptions.

Read in Daily Maverick: The politics of disruption: ANC councillors’ destructive path is likely to hurt the party in 2024 elections

The ANC delayed the council’s debate on the State of the City Address and subsequent council meeting “through shameful antics and threatening behaviour” on Thursday, said spokesperson for the mayor, Phakamile Mbengashe.

“Their behaviour deteriorated to such an extent that the Ekurhuleni Municipal Police Department had to be summoned to secure the OR Tambo precinct and ensure the safety of non-ANC councillors.”

The ANC’s actions also had the effect of delaying the tabling of the draft budget, Mbengashe added, which “crucially needed to be done to allow for public participation on it to commence.”

After Masina and Dlabathi’s removal from the chambers the ANC caucus decided to follow suit, bringing the session to an abrupt close.

In response to Thursday’s events, the ANC in Ekurhuleni condemned the forced removal of its caucus leader, saying it was “disgusted by the unlawful act” by speaker Dhlamini to instruct officers from the Ekurhuleni Metro Police Department to “forcefully manhandle and assault” Masina.

In a statement, ANC caucus whip Dlabathi accused Dhlamini of abusing both council standing orders and law enforcement in having Masina removed from the chambers.

“The council standing orders encourage participation by council members and as such, the speaker ought to facilitate discussions and debates in an impartial manner.

“It was apparent that the questions for written reply had not reached the speaker for proper council engagement. When such a procedural matter was interrogated by our ANC caucus leader, the incompetent speaker chose to suppress the enquiry and clearly ventured into suffocating the ANC caucus,” said Dlabathi.

Dhlamini “chose the route of abusing standing orders by calling for privately hired securities and [Ekurhuleni Metro Police Department] officers to manhandle our ANC caucus leader. This act will not be left unattended, especially when there was no grave disorder, but simple engagement.”

Dhlamini had failed “dismally” in leading the proceedings, and had resorted to “apartheid bullying tactics”.

On Friday, the ANC labelled the multiparty coalition in Ekurhuleni “anti-democratic”.

“The coalition government under the leadership of comrade Mzwandile Masina, despite having been confronted with numerous instances of heckling and jeering in council chambers by the opposition, never once resorted to the use of force as a means of maintaining order,” read the statement by the ANC regional task team on Friday. DM

ANC EKURHULENI REGION STATEMENT ON THE ABUSE OF POWER AND GROSS VIOLATION OF STANDING ORDERS BY THE MULTIPARTY COALITION #EkurhuleniCouncil #ANCEkurhuleniCaucs pic.twitter.com/zDUnhbQJfl