Ekurhuleni looks okay on paper but, in reality, it’s on shaky ground 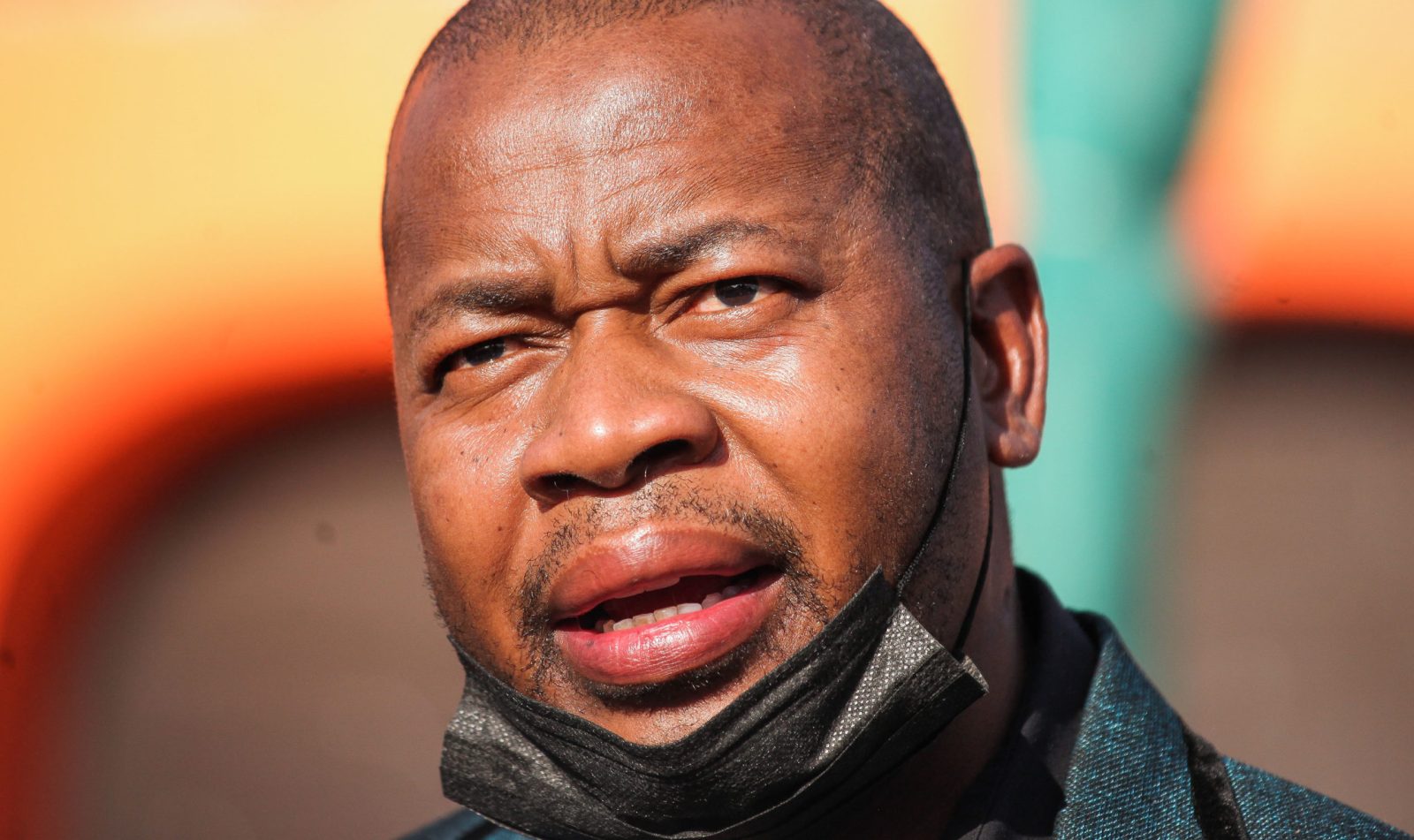 Revenue is under threat, thanks to Covid-19 and looting, among other things.

What was called the East Rand has a reputation as a tough place. For example, in one episode of a long-lost South African Curb Your Enthusiasm-inspired TV comedy series, a white youth asks for mentorship from the main character, a white actor who says he actually wanted someone “previously disadvantaged”. The youth replies in a heavy East Rand accent along the lines of: “I come from Boksburg. Do you know how previously disadvantaged that is?”

If this odd snobbery had any basis, it has long gone. Anyway, one of its cities, Benoni, gave the world Bryan Habana, Grace Mugabe and Charlize Theron. Lately, Ekurhuleni has also been given prominence thanks to its executive mayor, Mzwandile Masina, an outspoken supporter of ex-president Jacob Zuma and of coalition governments.

The coalition government Masina heads in Ekurhuleni with The African Independent Congress (AIC), Pan Africanist Congress (PAC), Patriotic Alliance (PA) and the Independent Ratepayers Association of South Africa (IRASA) has, unlike the Johannesburg coalition arising from the same election, proved stable. Since it comprises the ANC with almost 49%, and other parties contributing at best less than 2%, this is not surprising. None of the small parties could without the coalition hope to wield any influence, and the coalition gives some credence to the idea that a vote for a smaller party is a vote for the ANC.

Covering what was the East Rand, the municipality of Ekurhuleni is the workshop of SA and one of the three metros in the economically important province of Gauteng along with Johannesburg and Tshwane.

On paper at least, Ekurhuleni is relatively well run. Its financial statements regularly get “unqualified” audits from the Auditor-General (AG) of South Africa, meaning that the financial statements contain no material misstatements, though the AG has made findings on either reporting on targets or noncompliance with legislation, or both.

Problems loom. The biggest hurdle for the municipality in coming years will be the effect of the Covid-19 crisis plus the recent looting, and the effect on municipal revenue. The municipality’s projections of income depend on it being able to collect more of what it bills. In its Medium-Term Revenue and Expenditure Framework budgets for next year and the two subsequent years, the municipality admits that to reach the necessary 90% collection level the city will need to have “more robust credit control measures”. In the 2019/20 year the cash collection rate was 80%, thanks in part to Covid-19 hardship, and it is hard to see how this will be done. 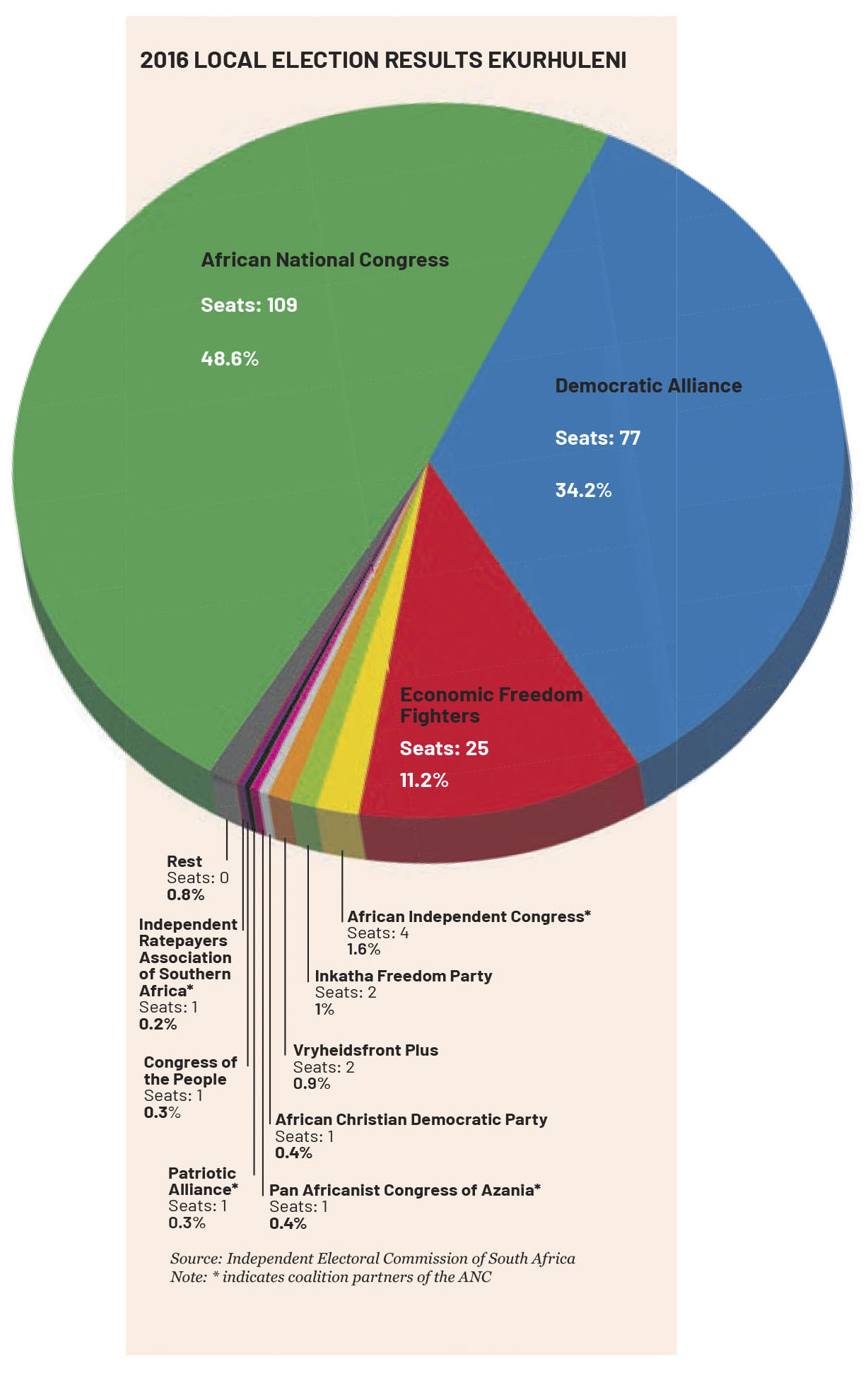 Added to this is the reliance on electricity sales as a driver of municipal revenue, and in this Ekurhuleni is not alone. The city discloses that revenue from selling electricity is budgeted to stay around 42% to 43% of total municipal revenue in the three years from next year to 2023/4. For the same period, property rates are budgeted to stay around the 15% percentage of revenue, while water will hover around 12%, sanitation around 5% and refuse removal around 4%.

Yet this year the increase in the Ekurhuleni electricity tariff is around the 15% allowed by the electricity regulator. The National Energy Regulator of South Africa also raised the cost of municipalities buying electricity from Eskom by 18%. Municipalities have long relied on profits from the sale of electricity to offset income from property taxes, and sharp increases mean consumers use less or rely on illegal connections, and businesses and wealthier consumers resort to generating their own power, leading to even more price increases and lower consumption in a vicious spiral, leaving property taxes as the only other real source of revenue while costs, including wages, continue to rise.  Lower revenue without concomitant cuts in operational spending means less of a surplus to reinvest in capital spending on new assets and renewal of assets such as substations, which means more disruption, loss of supply and lower revenue.

In the Statistics SA Community Survey 2016 for Ekurhuleni, the cost of electricity was seen as one of the greatest difficulties facing the municipality (17%), along with stability of supply (7%).  Municipalities generally struggle to fully spend on capital projects what they plan to spend, and Ekurhuleni is no exception. The accepted guideline is that municipalities should spend at least 95% of their capital budgets, and spending less than 85% is a danger sign.

The Ekurhuleni DA caucus leader Tania Campbell says the lack of new investment can be seen in the sewerage situation. “In the 20 years since [the City of Ekurhuleni] was established, not a single new sewerage plant has been built despite the increasing population and densification. This has resulted in many of the sewage-processing plants working at over 100% capacity.” This may be true, though a Department of Water and Sanitation presentation by Acting Director-General Trevor Balzer last year gave Ekurhuleni’s sanitation plants the thumbs up, with some comments on ageing infrastructure. That the city is not spending enough on renewing the ageing infrastructure is borne out by figures on water and electricity losses. Masina himself has admitted the city has had an “unfortunate spate of intermittent and unscheduled electricity supply failures”, not too far from the DA assessment that “power outages have become the norm”. Johannesburg leads with water and electricity losses, with Ekurhuleni and Tshwane close behind. Electricity and water availability are essential in attracting direct investment in job-creating industry in Ekurhuleni, with its drawcard of housing OR Tambo International Airport. At the same time, the municipality has to balance the demands of wealthier households and businesses with the basic needs, including free basic electricity, of the poorer residents. Another such need is sanitation – and chemical toilets look like monuments to inequality in one very basic need.

They stink in other ways. Allegations of corruption have swirled around the city, including an amaBhungane report on irregularities in chemical toilet tenders. In April this year the Special Investigating Unit announced it would be probing the botched procurement of 200 three-wheel motorised waste collection vehicles for Ekurhuleni for R27-million by the Gauteng government and a further R7.8-million by Ekurhuleni itself.

More worrying is a note in the AG’s report that weaknesses in the preventative controls of the City of Ekurhuleni Metro meant the AG had to come to the aid of the municipality with computer-assisted audit techniques to identify conflicts of interest. “Municipal employees flagged in this way subsequently resigned from being directors of companies doing business with the state. As the municipality did not have access to a database of companies for which family members of employees worked, it was not possible to identify conflicts of interest relating to family members.” It is most worrying that warnings year after year by the AG about conflict of interest are simply ignored.

DM168 submitted queries to the Finance MEC and various ANC municipal representatives but there was no response at the time of publication. DM168