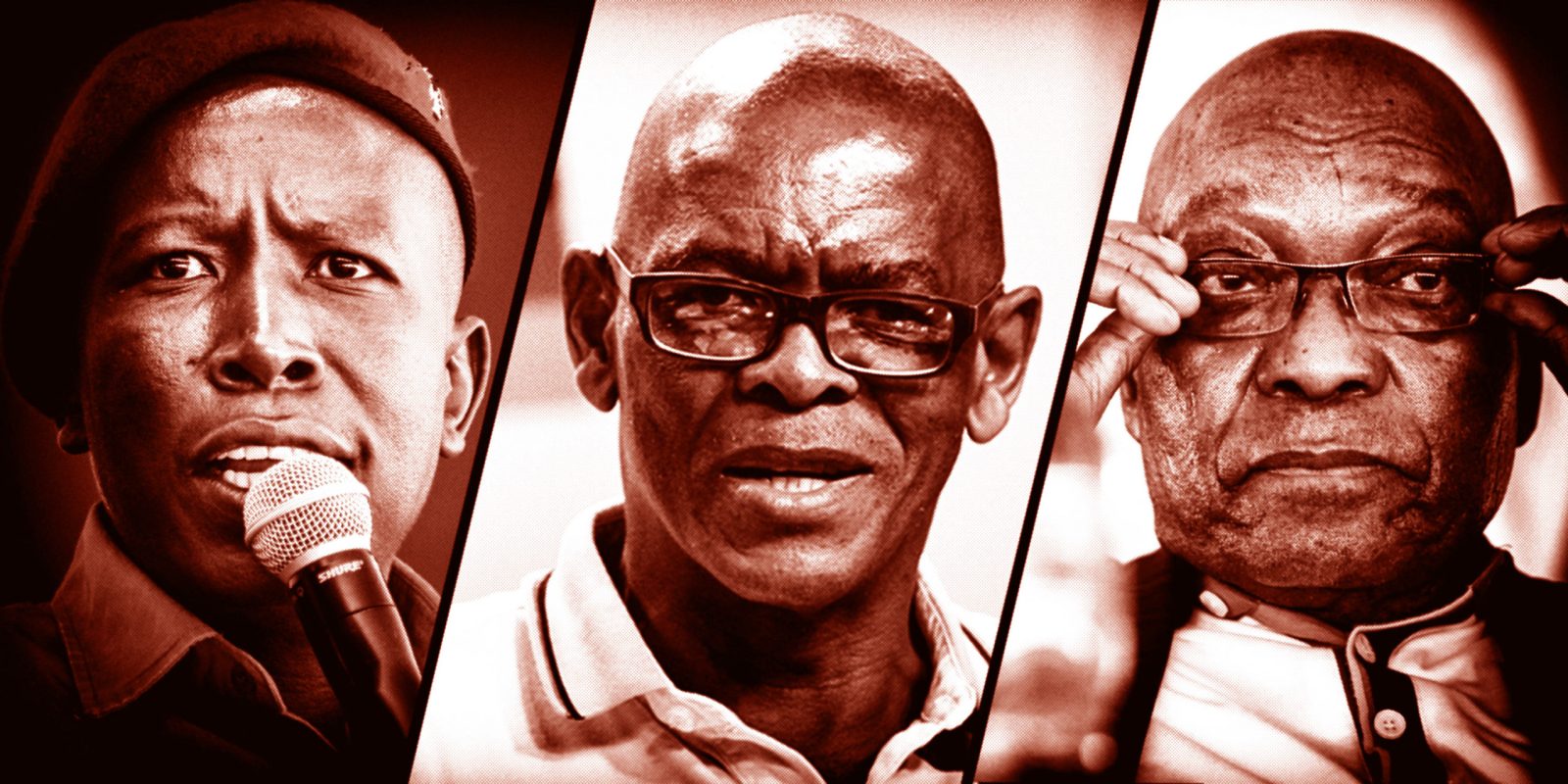 On Friday morning, former president Jacob Zuma and EFF leader Julius Malema are due to sip tea together and discuss matters of mutual concern. It would appear that a confluence of similar interests may be leading to a complicated, unlikely and, no doubt, temporary alliance.

On Wednesday, the ANC Secretary-General, Ace Magashule, completed the Unholy Trinity by claiming that Zuma “has done nothing wrong” and that we should “not worry too much about the Constitution”. This related to the Constitutional Court ruling that Zuma must appear before the Zondo Commission.

It is clear that Zuma and Malema would like the entire world to know that they are having tea. It was arranged, supposedly, on Twitter. (Yeah, right – Ed.) Of course, it cannot be that Malema just decided to tweet Zuma, and Zuma, not the world’s most prolific Twitter/tech user, decided to answer him. Rather, this public display of a wish for shared tea consumption must be a product of earlier discussions and arrangements about the health benefits that come with the ritual usually associated with the British upper class.

Intriguingly, Malema has brought in the mayor of Ekurhuleni (and South Africa’s spelling bee champion – Ed) Mzwandile Masina, revealing that he would be the person to make the final arrangements.

Masina has made no secret of his preference for the EFF’s economic policy over that of his own party, the ANC, and so is the perfect choice to arrange this shared brewing of tea leaves and new ideas.

However, the context to all of this is the Zondo Commission, and the ruling by the Constitutional Court that Zuma must appear before it. Zuma has said in public that he will defy the ruling and is prepared to go to jail as part of this defiance.

The history between Malema and Zuma is long and complex, and involves twists, turns, violence and betrayal.

Then, in April 2012, he said: “We have seen under President Zuma democracy being replaced with dictatorship.”

In 2018, after being kicked out of the ANC and creating the EFF, Malema claimed to have “warned about this president”.

In the world of political reality, it was Zuma who started the process in 2010 that led to Malema’s expulsion from the ANC.

It was he who created and oversaw the situations in which Malema and EFF MPs were removed violently (and possibly illegally) from Parliament. It was he who used the power of the state against Malema.

SONA2015: When the rulers decided on the night that might is right

And still, a tea party is on the cards, with peace breaking out between them a foregone conclusion.

No surprises there, though: Malema has changed his public posture on people and issues over the years, sometimes dramatically.

In 2008 he was the first person to suggest in public that Thabo Mbeki should be removed as president, saying in the moments after the Nicholson judgment was delivered: “Bye bye, Mbeki, bye bye.” But, by 2016, Malema and other EFF leaders had their own tea with Mbeki on the eve of the local elections.

The behaviour of Malema and Zuma indicates that neither of them should believe that any alliance between them would have an air of permanence.  Just a few days ago, the EFF said that Zuma should testify before the Zondo Commission, and that he must respond to the claims against him.

Zuma will be arrested & jailed for defying the ConCourt! If this doesn’t happen, then we can kiss our Constitutional Order good bye! No one, not even a sitting president, must defy the highest court in the land with impunity! Do the right thing #ArrestZuma, with no hesitation!

What chance is there of Malema using the period between the warming of the teapot and the stirring of the sugar to advise Zuma to comply with the court’s ruling and go before the Zondo Commission?

A former president, taking advice from someone much younger than him? It is unlikely that Zuma would suddenly change tack.

It is more likely that the advice would go the other way, that Zuma will argue to Malema that he should now oppose the Zondo Commission.

Zuma might well find this fertile ground – the EFF has already said it believes the Zondo Commission is biased.

But for Malema the much more likely concern is that the Zondo Commission is reportedly investigating him, and his alleged role in the looting of the VBS Bank.

Considering the strength of the evidence against him in the public domain, and the wealth of details that show that he directly benefited from money that belonged to VBS, he has every reason to be concerned.

A coalition, however temporary, of Zuma and Malema against the Zondo Commission may be on the cards and to the benefit of both sides. It is possible to imagine how they would publicly condemn the commission and possibly even try a joint legal action.

However, this strategy does have its limits.

Legally, they would have to prove bias on the part of the commission, which may be difficult to do before it has actually made findings.

Politically, both Malema and Zuma have constituencies, but neither of them has shown signs of growth in the last few years. And neither would have the full support of the machinery of the ANC, which made both of their careers.

That suggests that in fact Malema and Zuma simply crave attention. They are under pressure and have a shared interest in trying to snatch the limelight, to give the impression of commanding some political power.

However, what might change this game slightly is the one person who might join them: Ace Magashule.

On Wednesday he said that people “should leave Zuma alone… he’s done nothing wrong”, before telling journalists that they “shouldn’t take the Constitution too seriously” .

This immediately led to the reasonable claim that the secretary-general of South Africa’s ruling party does not respect the country’s Constitution. The party’s spokesperson, Pule Mabe, had to defend Magashule, and confirm that the ANC still regards the Constitution as the “apex law of the land”.

But both Mabe and Magashule would not say simply that Zuma must comply with the Constitutional Court ruling and testify before the Zondo Commission.

This is yet another obvious sign of the chasm within the ANC and its top leadership.

While Magashule has been strongly criticised for his comments, he is not the first ANC secretary-general to head in this direction.

In 2008, the then secretary general, Gwede Mantashe, claimed two black judges who had ruled against the ANC in a dispute with Cope were “apartheid apologists”. Earlier that year he claimed Constitutional Court judges were “counter-revolutionary forces” who wanted to pounce on the then future president Zuma.

This might lead to questions of whether there is a structural reason why the secretary-general of the ANC makes statements that could cause systemic damage to South Africa.

But Mantashe never faced criminal charges, while Magashule has another court date in two weeks’ time. The comments he made about the Constitution may well be more about his own position than about Zuma’s, and a suggestion that he is feeling under pressure from the legal system.

This would obviously push him very much into the arms of those who are currently preparing their best china for Friday’s elevenses.

It has to be asked: how much support can Zuma, Magashule and Malema garner, especially outside the ANC’s warm embrace? In terms of public support, the answer is: not a huge amount. Zuma’s approval ratings dropped below 20% during his term, and are unlikely to have risen much since then. Magashule had an approval rating of around 11% in the last public poll on his behaviour and currently faces criminal charges. Malema’s party, the EFF, has never threatened to go above 15%.

None of this suggests that any possible coalition of the wounded and criminally-charged could threaten the formal ANC at the polls. And that might well be the coalition’s fatal weakness. Without strong and deep public support, or any real prospect of managing a nation-wide mobilisation, it will be hard to have a significant political impact.

But it does appear that events are moving towards some form of climax. Zuma is now where he never wanted to be, facing the corruption charges he tried so hard to avoid, and jail time for his refusal to attend the Zondo Commission. He may well seek anyone who can provide any help whatsoever. DM