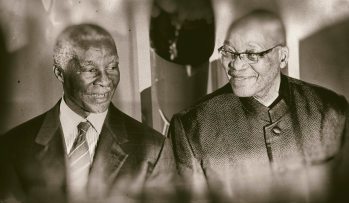 South Africa did not have a rousing Michelle Obama-like showstopper moment in the 2016 local government campaign but a photo opportunity with former President Thabo Mbeki has certainly proved to be the most sought-after appointment. Mbeki has not appeared on the campaign trail but an unexpected meeting with the leadership of the Economic Freedom Fighters on Monday seems to have disorientated the ANC. The final 48 hours is a crucial time to convince undecided voters, who appear to be the differentiators in these elections. Instead of stitching it up, the schisms in the ANC resulted in a clumsy outcome with still no direct endorsement from Mbeki. By RANJENI MUNUSAMY.