Tender tycoon Edwin Sodi returned to the State Capture inquiry on Tuesday 29 September to explain a slew of payments to politicians over six years. The multimillion-rand transfers include references to ministers, deputy ministers, and the ANC. His reply: No harm, no foul.

The tenderpreneur returned to the Judicial Commission of Inquiry into Allegations of State Capture on Tuesday 29 September. Sodi was grilled over a slew of payments made between 2013 and 2019.

He defended the various deposits and bemoaned a recent newspaper article pre-empting this evidence at the inquiry.

He donated R3.5-million to the ANC, of which he transferred R371,553 directly to Mashatile. “For what reason?” asked Pretorius. From time to time, answered Sodi, different ANC people approached him and asked for help.

The records Pretorius raised reflect a payment of R174,000 to Kodwa. “He would say we have not been paid on time from Luthuli House or there are delays in payment. It still happens now,” explained Sodi.

“Zizi is a friend that I have known for a number of years and I’ve made payments to him in his personal capacity before he joined government, when he still worked for the ANC, and that can be verified.”

Regarding a R6.5-million payment to Mkhize, Sodi said:

“It was paid to the ANC at the time he was the treasurer-general and he would have been the one that approached me at the time to ask for assistance, that’s why his name is used as a reference.”

Sodi later defended his “substantial” donations to the ANC: “I am not a card-carrying member of the ANC, but I support the ANC.”

“I don’t think there is any crime in one supporting a party of his choice. The fact that a lot of the work I get is from government, I find that a bit overreaching to create the link to my donations to the ANC and the work that we get.”

Sodi raised the alarm on a leak to the press and said this had informed his decision to withhold his personal tax records.

The business records he gave investigators reflect the politically sensitive transfers between 2013 and 2019, details of which were published on Sunday. 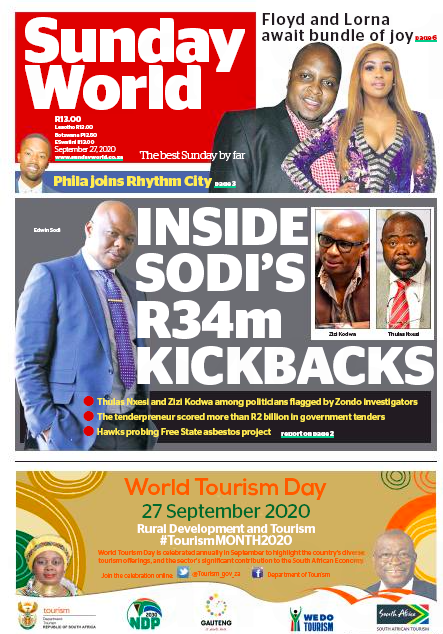 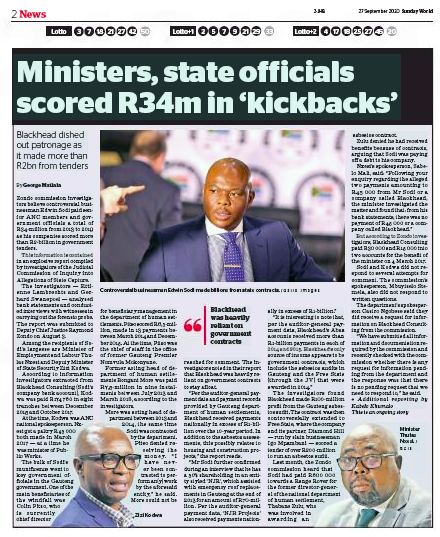 His photograph was splashed across the front page of Sunday World. The newspaper’s lead story recorded that Sodi’s Blackhead Consulting “dished out patronage as it made more than R2bn from tenders”.

“There are all sorts of perceptions that get to be formulated and, you know, tarnishing people’s images as well,” said Sodi.

After the Sunday World report, Sodi phoned Nxesi who said he had not been given a right of reply to explain the payments. Sodi told Zondo he paid R45,000 on Nxesi’s behalf to help underprivileged children with schooling and accommodation.

Pretorius remarked on similarities between a R255-million asbestos project and two other corrupt ventures in the Free State, namely a R1-billion housing scheme and the Estina dairy project.

The legal team leader detected a pattern in deals involving private individuals and government which benefit the ruling party. “Perhaps in time the bigger picture will be put together,” he said.

In August, Sodi was questioned over the Free State asbestos project he and business partner Igo Mpambani (who was gunned down in 2017) nabbed with the Free State Department of Human Settlements. The Public Protector found “serious irregularities” in the venture.

During his previous appearance at the inquiry, Sodi declared his preference for “holy waters” or luxury liquor. This arose in the context of a R600,000 tavern bill Sodi said he racked up over about six months.

Sodi said he accrued the debt buying alcohol from the sports lounge of Thabane Zulu, the then national director-general of Human Settlements. Sodi said he agreed to settle the bill with Zulu by paying R600,000 into the account of a car dealership in Ballito, KZN. The funds contributed to a Range Rover for Zulu.

Zondo and Pretorius questioned Sodi on yet another transaction Sodi entered into with a high-ranking government official involved in the asbestos project.

On Monday 28 September, Nthimotse Mokhesi, the current head of department (HOD) of Human Settlements in the Free State, said he approached Sodi for help in raising the capital for a R1.6-million house in Bloemfontein.

Mokhesi testified that the undertaking with Sodi was “purely commercial” despite the inclusion of a secrecy clause in the agreement.

Sodi provided Mokhesi with R650,000 toward the Bloemfontein house months after Mokhesi’s department awarded Sodi and Mpambani work to the tune of R255-million.

Sodi defended the property deal. “We had completed phase one,” he said of the asbestos work. “So, I didn’t see anything wrong entering, anything wrong with this transaction.”

“The position officially was there is still a job for you to do but you are saying unofficially you had been told there wouldn’t be a phase two,” said Zondo reflecting Sodi’s evidence.

“Did you raise the question why he wanted you as a partner?” asked Zondo. “Why you in particular?”

Sodi presumed it was because Mokhesi knew he liked “playing” and “speculating” in the property space.

Zondo asked if a consideration of whether or not the deal was appropriate had arisen during discussions between the businessman and the government official.

Sodi replied, “I raised it, and I raised that issue and I said, ‘Look, you know, we’ve completed our exercise.’” He conceded that “if one applied his mind to that properly I probably would have said this isn’t a good idea”.

With the benefit of hindsight, “I admit that, that it may look questionable.” However, he maintained it was “legitimate” and “above board” for him to transact with the HOD.

At the time, observed Zondo, someone without insider knowledge would have seen an agreement (service level agreement) that had not been terminated and included a second phase.

However, payment to Sodi and Mpambani for the first phase of the asbestos project (the survey of Free State houses with asbestos roofs) was incomplete.

“Mokhesi had to decide whether you should continue to receive payment and it was in his discretion […] to continue the payments and these payments continued through the same period that you were entering the agreement with him,” said Pretorius.

Sodi’s company Blackhead enjoyed a bountiful harvest in 2014. That same year Sodi made “substantial contributions” to the ANC’s election campaign.

Investigators’ number crunching shows that what Sodi paid toward a car for Zulu (R600,000) and a house for Mokhesi (R650,000) was chump change.

The same financial analysis shows that between 2009 and 2019 Blackhead received more than R1-billion from various housing departments.

Sodi response: “A lot of the work we do is related to human settlements, so it is unsurprising.”

Housekeeping of a different kind

Former minister of mineral resources and current ANC MP Mosebenzi Zwane was set to testify this week. The inquiry has furnished his lawyers with a bundle of 6,834 pages.

In order to give Zwane’s team time to evaluate the record, Zondo postponed Zwane’s evidence until Tuesday 13 October.

Proceedings are set to resume at 10am on Thursday 1 October. DM

UPDATE: On Friday, 2 October 2020 Minister of Health Dr Zweli Mkhize responded to “offensive sensationalism” and “a sideshow” tainting his name by suggesting he personally received funds from Sodi.

Mkhize obtained details of donations Sodi and his entities made to the ANC from 2014 to 2016.

According to Mkhize’s statement four transfers totalling R8.15-million “were deposited directly into the ANC’s official bank accounts” and, presumably, Sodi used Mkhize’s name as a reference on Sodi’s own bank records. Mkhize stated “categorically” that in his personal capacity he “never received any funds” from Sodi either himself or through a third party. He insists Sodi’s donations to the ANC of which Mkhize was then Treasurer-General were voluntary.

“They were never transactional or linked to securing work from government,” claimed Mkhize.

Careful to put distance between himself and the now-accused Sodi, whose valuable property has been seized by the Asset Forfeiture Unit, Mkhize recorded: “I have no personal, professional or business relationship with him.” The health minister affirmed his support of law enforcement agencies. The legal process, he wrote, should be allowed to run its course.