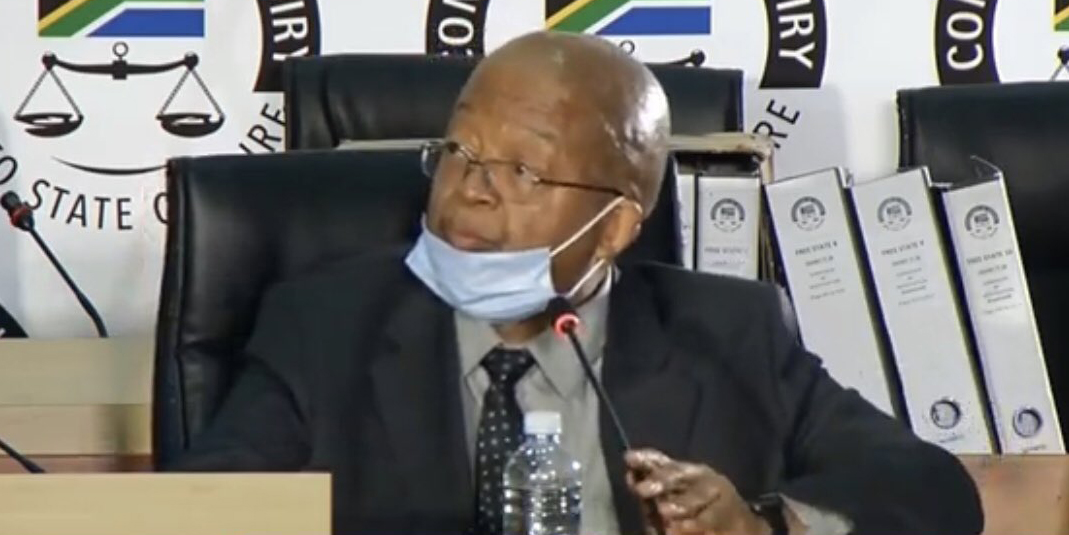 The Chairperson of the State Capture Inquiry has urged leaders to appear before him, take responsibility and admit fault. Deputy Chief Justice Raymond Zondo sighed heavily during the morning proceedings on Monday, 28 September 2020.

Before public hearings conclude at the end of March 2021, Zondo hopes more public servants and political leaders will step forward.

“I’m hoping that I’ll hear some people within our country who will be able to say a lot of things went wrong and who will stop pushing blame to other people,” he said.

Zondo’s remarks occurred the same day it emerged that former president Jacob Zuma called for the judiciary’s second-in-command to recuse himself.

Zuma’s latest move follows a brutal statement issued by his foundation. In it, the JG Zuma foundation slated Zondo over public comments two days before.

Zuma’s lawyer Eric Mabuza wrote to Zondo sharing his client’s view that Zondo was prejudiced against him.

In less than a fortnight, the legal team will argue why they think Zondo should authorise a summons forcing Zuma to appear in November 2020.

Zondo announced at the hearing on Friday 9 October 2020 about how the summons would proceed with or without Zuma and his legal team’s presence. Since Zuma would not appear last week, the legal team has focused on corruption in the Free State.

Sleeping on the job

Legal team head and evidence leader advocate Paul Pretorius SC began the second consecutive week focusing on two irregular projects in the Free State. One was so problematic that in February 2011 then Minister of Human Settlements Tokyo Sexwale called a meeting in his office.

Sexwale was alarmed at underspending by the Free State housing division so he called then MEC of Human Settlements in the Free State, Mosebenzi Zwane, to his office.

By then, Zwane had allegedly hatched an unlawful solution to ensure his department would not forfeit the allocation of some R1.3-billion for low-cost housing. Zwane denied any knowledge of the solution being unlawful; he testified he took his juniors’ advice “in good spirit” and understood the plan was lawful.

Former Head of Department (HOD) of Human Settlements in the Free State, Mpho Mokoena, testified about the meeting during which he reported Sexwale said, “No, I’ll not agree to it. I hear you, but this is not correct.”

Zondo’s voice boomed as he said on Monday:

“It’s like the whole department was asleep […] until Mr Sexwale in Pretoria said, ‘WAKE UP! Can’t you see what’s happening? You are not spending money. You are not working.’ ”

In light of evidence about the Vrede Dairy Project, a failed multi-million rand asbestos audit, and the 2010-2011 housing scheme, it seems many Free State officials were not so much asleep as turning a blind eye to lawbreaking.

Whereas the previous week he detailed a grossly wasteful housing scheme in which he said R631-million was wasted, Monday’s sitting concerned an irregular asbestos project in the same province.

The former Deputy Director-General of the Department of Local Government and Traditional Affairs in the Free State, Mmuso Tsoametsi, spoke second. He discussed the housing scheme of 2010-2011.

Mokhesi insisted his appearance before Zondo was proof he was taking responsibility:

“I’m not completely standing aside and saying, “No, no, no it’s not me, it’s somebody else.’”

He admitted, “This particular issue is happening right at the end of my career. You know, it’s not good for me.” Zondo replied, “That’s quite important.”

“Our concern is simply that these questions seem to be largely based on the evidence that he gave here,” said Mpofu.

Pretorius replied, “Whilst a witness has protection in relation to self-incriminating questions, there’s nothing in the law or regulations – either statutory or common law – that prevents the law enforcement agencies of investigation in relation to other persons (in) the answers given and that evidence may be used against other persons.”

On Thursday 20 August 2020 tender tycoon Sodi testified on the asbestos audit. He is scheduled to return to the commission on Tuesday 29 September 2020 from 11:30.

Both Mokhesi and Tsoametsi’s input suggests the Free State province in the central east of the country is more akin to the Wild Wild West, specifically regarding provincial contracts.

Each witness fielded questions on conflicts of interest in relation to dubious commercial agreements they undertook while working for the government.

Mokhesi sought to explain why Sodi’s R650,000 contribution to the Bloemfontein house he bought for some R1.6-million was above board. At the time, Mokhesi was a high-ranking official in the Free State’s human settlements department.

Mokhesi testified he first approached relatives to join him in buying a house in Bloemfontein as he regularly stayed in the city for work purposes. When his family could not help, Mokhesi contacted Sodi as he knew the tender tycoon invested in property.

A contract between Mokhesi and Sodi included a secrecy clause, asserting the property investment may not be disclosed to third parties. Pretorius wondered: why was the muzzling clause necessary?

Mokhesi said he understood the contract was standard. He had “no comment” as to why it was included. Zondo remarked Sodi could have invested in a range of properties.

To Zondo, this raised a pertinent question: why did Sodi invest R650,000 specifically in Mokhesi’s house months after Mokhesi’s department awarded the JV work to the tune of R255-million?

Sodi’s R650,000 contribution to Mokhesi’s house was hidden in a family trust, and he was not registered as the property’s owner. Zondo said, “One gets the impression that he wasn’t bothered about this R650,000.”

Zondo noted the two men entered the agreement some six months after the JV nabbed the R255-million deal. He asked Mokhesi if, from a legal perspective, it was right for him to enter the agreement with Sodi. Mpofu quickly interjected to shield his client.

Mokhesi replied, “It was purely commercial.” He saw no ethical dilemma with the agreement then, but in hindsight “maybe” he should not have entered into a partnership with Sodi. Mokhesi enjoyed Sodi’s support, which enabled him to buy a house for R1.6-million. Meanwhile, while the work Sodi and Mpambani’s JV won was poorly executed.

Till today, many poor Free State residents sleep under roofs containing hazardous asbestos fibres. Their provincial government set out to remove it, paid the JV to do so, and it failed.

When the day’s second witness, Tsoametsi, appeared he, too, faced questions over a commercial deal.

Tsoametsi secured subcontracting work in late 2011. By then he was working in the Free State Department of Agriculture. He saw no conflict of interest in securing the subcontract to build 500 low-cost houses.

After a late 2010 meeting attended by Zwane and officials, Tsoametsi researched a solution involving advance payments to suppliers before building materials were delivered. Colleagues relied on his report when authorising the 2010-2011 housing scheme.

“An opportunity presented itself that there is a contractor in the nearby town that is looking for people that can implement his project,” explained Tsoametsi of the 2011 deal.

Tsoametsi needed to “get employment” for his wife. The subcontracting opportunity arose with a property company owned by Free State businessman Frans Tshepo Mokoena.

Pretorius noted that in 2011 Tsoametsi took to Mokoena his knowledge about the housing scheme, obtained through his research. Tsoametsi agreed.

The former DDG defended the subcontract to build 500 houses, as it excluded advance payments from the province for building materials. Tsoametsi even argued for a more lenient approach to contracts with the relatives of government employees.

“The Free State economy is 60% driven by government investment, which simply means almost everybody in the Free State is dependent on government resources one way or the other,” he said.

Pretorius was adamant there was a clash of interests and Tsoametsi was sitting on both sides of a proverbial fence.

“You were, on the one hand, dealing with a certain set of issues and on the other hand you were benefiting from those,” he said. Tsoametsi disagreed.

The day’s sitting ended as it began: Zondo highlighted self-reflection, admission and responsibility.

“I think South Africans will be happy if they see more leaders and see more senior managers and look at themselves,” he said.

“If you deny that you fell short you won’t see any need to come up with the solution.”