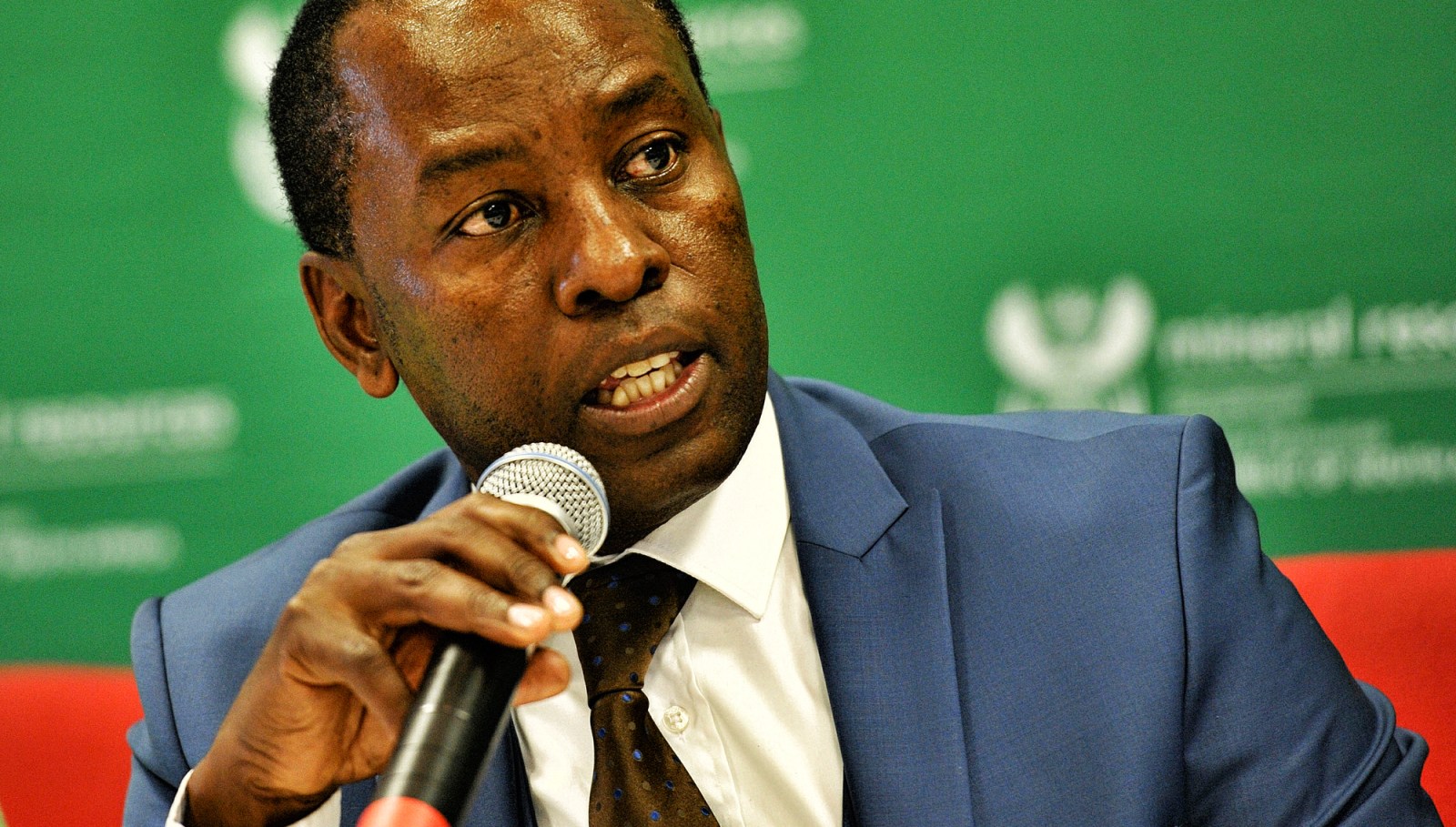 Mineral Resources Minister Mosebenzi Zwane addresses the media during the release of the 2016 health and safety statistics in the mining sector on January 19, 2017 in Randfontein. (Photo by Gallo Images / Sowetan / Veli Nhlapo)

Some foundations were laid for RDP houses. Building materials, when delivered, were dumped on site. Contractors simply failed to build houses, vanished with government funds and faced little to no consequence.

Mpho Mokoena testified he heard as much when he attended the meeting in Sexwale’s office. Mokoena, former Free State human settlements department head, testified at the Zondo Commission on Tuesday 22 September 2020.

A day earlier, former president Jacob Zuma was due to testify. His lawyers told the secretariat Zuma was preparing for his criminal trial, he had received medical advice to mitigate his risk of contracting Covid-19, and he was taking legal advice about regulation changes.

With Zuma’s appearance struck from the week’s plan, the legal team introduced evidence on an obscenely wasteful Free State housing project. According to the present Head of Department (HOD) Nthimotse Mokhesi, the department spent a staggering R631-million on the project without receiving anything in exchange.

“There was no evidence when the department made its payments that it received value for the payments it made in that houses had been built or partly built,” read Mokhesi’s statement. At most, some foundations were laid for RDP houses. Building materials, when delivered, were dumped on site. Contractors simply failed to build houses, vanished with government funds, and faced little to no consequence.

Mokhesi testified the department did not get bang for its buck, while the scheme’s consequences included homelessness for some of those meant to benefit, and a delay in housing for hundreds of families. His predecessor, Mokoena, claimed Zwane masterminded the con in October 2010.

Zwane now serves as an ANC MP and is dogged about his political survival. Zuma appointed him as Minister of Mineral Resources in 2015. Previously, he was the MEC of Human Settlements in the Free State.

To date, witnesses at the inquiry have detailed Zwane’s role in the Vrede Dairy Project. As minister, he was instrumental in securing Tegeta’s acquisition of Optimum Coal Mine. Now Zwane stands accused of masterminding a wasteful housing project with hundreds of millions of rands unaccounted for.

Zwane allegedly hatched a plan in October 2010 to ensure the provincial department would not forfeit more than R1-billion allocated by the national department for the 2010-2011 financial year.

“Our problem is that we were not spending on our human settlement grant,” explained Mokoena.

He claimed Zwane proposed a solution: belatedly approve a housing project before the financial year ended and hurriedly pay contractors in advance, long before they met building milestones. “For me, it was illegal,” said Mokoena.

The former HOD was adamant he was the only person at the October 2010 meeting who raised a problem with Zwane’s plan. “We were trying to work from the allocation backwards,” he explained.

After the October 2010 meeting with officials, Mokoena asked Zwane for a word in private.

“He said then to me: look, we have discussed about this. This is my plan and it’s going to happen,” testified Mokoena.

Zwane allegedly told Mokoena if he did not sign approval for the plan’s implementation he should resign. Mokoena claimed Zwane threatened him with “abject poverty”, saying to Mokoena he would be “poor, you’ll be like grey, like dust”.

Chairperson Deputy Chief Justice Raymond Zondo asked Mokoena to translate precisely what Zwane allegedly said to him in Sesotho. Mokoena answered, “You’ll be walking next to your shoes, you won’t walk in your shoes. There will be no shoes to walk in, in other words.”

Not on my watch, says Sexwale

Once Mokoena approved implementation in late 2010, a payment glut began. The payments caused minister Sexwale alarm. The national department was stunned at the department’s payments, including handing cash to suppliers. In February 2011, Zwane and provincial officials (including Mokoena) met Sexwale in his office.

During the meeting, said Mokoena, Zwane addressed the legality of the plan he allegedly hatched in October 2010. Mokoena recalled:

“Did the MEC attempt to persuade the national minister that the plan was legitimate?” asked Pretorius.

“He did try in the meeting, but he did not succeed,” said Mokoena.

He wrote in his affidavit to the inquiry:

“The minister said he heard that we were paying in advance and that same must be stopped as it is illegal, and it could not happen whilst he is the Minister of Human Settlements.”

Zondo grilled Mokoena on his own liability:

Mokoena said he regretted many of his actions as HOD. Pretorius gave the witness a nod for his candour. In 2013-2014 the provincial department investigated the scheme and sanctioned some managers.

The Special Investigating Unit (SIU) has interrogated the scheme’s finances, too. Seeming bewildered at the inaction, Zondo wanted to know why there were no arrests. He pressed Mokhesi as to why political “kingpins” in the swindle had not been brought to book.

Zondo said: “It is concerning because part of the complaints connected with allegations of State Capture is that some of the law enforcement agencies were paralysed or didn’t do their job in regard to certain matters.”

Pretorius noted: “It just seems in the first place unfair to charge those who were down the line in the pecking order, as it were, in executing the plan and not charge the person that devised the plan.”

Zondo added: “It is concerning when the taxpayers have lost as much money as we are talking about here and they lost it in 2010 and 2011 by the end of the financial year […] that’s March 2011.

“Ten years later there is nothing that the public knows that the department knows that gives confidence that something is being done, that the matter is being given the urgent attention it deserves.”

Mokoena is due to continue his evidence on Wednesday 23 September 2020 from 10am. DM